The PATINDEX function of SQL Server packs powerful magic, but it is easy to get it wrong. Phil Factor returns to the Workbench format to give a tutorial of examples, samples and cookbook ideas to demonstrate the ways that this underrated function can be of practical use. It is intended to be pasted into SSMS and used as a basis for experiment

The PATINDEX function is a treasure, and it is the obvious way in SQL Server to locate text in strings. It uses the same wildcard pattern as the LIKE operator, works as fast, but gives back more information. It is closest in functionality to CHARINDEX. People worry that it does not allow a full RegEx, but that is missing the point. It will do useful string searching, as I’ll show you, and it is optimized for performance in a database. A RegEx search performs a different service and is slower at doing those routine jobs that PATINDEX is intended for.

It is great for quick checks on your data. Here, we do an elementary check on a stored IP address.

So here, the % ‘wildcard’ character has a special meaning, which is ‘any number of any character’. BOL puts this as ‘Any string of zero or more characters.’ For some reason, most developers seem to think that there is a rule that you can only use them at the start and/or end of a pattern. Not true. You can use them anywhere, as many as you like, but not adjacent as all but the first are ignored. The meaning ‘One of any character’ is denoted by the underscore wildcard character, ‘_’. So what does the IP check we have shown you comprise? Nothing more than counting that there are three dots in the string. We can do more but it gets rather more complicated.

Note that, because we are just testing for existence, and aren’t going to extract it, we could also use LIKE

Here is another simple example of its use

Here are a few other more practical examples of using the ‘%’ wildcard.

The same technique can be used where you want to trim off whitespace before or after a string. You might think that RTRIM and LTRIM do this but they are slightly broken, in that they only trim off the space character. What about linebreaks or tabs?

Let’s try something a bit trickier, and closer to a real chore. Let’s find a UK postcode. (apologies to all other nations who are reading this)

Before you get too excited, I must point out the the postcode validation is more complex. We can’t use it because PATINDEX uses only wildcards and hasn’t the OR expression or the iterators. We can do quite well though..

What if you wanted to do the more common chore of extracting the postcode from an address-line and putting it in its own field? This is where you have to stop using LIKE as it won’t cut the mustard. If you are of a nervous disposition in your SQL-writing please turn away now.

…and then we’ll populate it with 100,000 rows via SQL Data Generator (we’ll use a RegEx to fill the address column in). 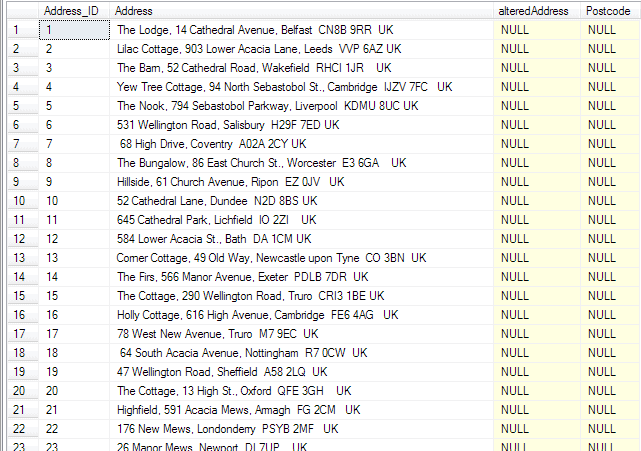 Hopefully, I’ll remember to put it in the downloads at the bottom of the article for the other SQLDG freaks. Then we are going to pull out the postcode information, place the modified address without the postcode in a second column, and put the extracted postcode into its own column so we can subsequently do lightning searches based on postcode. This whole messy process runs in five seconds on my test machine. If you did a neat cursor-based process, it would take minutes. 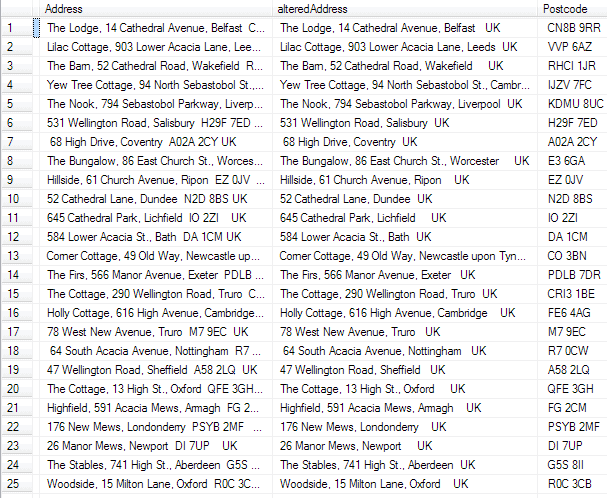 So here’s a puzzle to end off with. You have a field with an email address somewhere in it, and you need to extract it. Here’s one way of pulling it out. It looks a bit complicated, but it is fast.

What are we doing here? The principle is simple. We look for the embedded ‘@’ sign, and then run a check forwards to get the end of the string containing the ‘@’ character. Then we reverse the start of the string and look for the beginning. When we have these, it is just a simple matter of assembling the email address. The SQL looks laborious, but looks can deceive, so it always pays to test it out. Let’s test it out by recreating our addresses table, and stocking the address column with an additional email record.

So there we have it. In summary, when using PATINDEX: