Why is My Database Application so Slow?

When your application is running slowly, the reflex action is to blame the database queries. It is certainly true that some of the more extravagant delays can be fairly blamed on a missing index or unnecessary locking, but there are other potential villains in the drama, including the network and the application itself. Dan Turner points out that you could save a lot of time and money by working out for sure where the problems lie before diving into the detail.

Slow applications affect end users first, but the impact is soon felt by the whole team, including the DBA, Dev team, network admin and the system admins looking after the hardware.

With so many people involved, each with their own view on the likely cause, it can be hard to pin down where the bottlenecks really are.

Broadly, there are two main causes of performance issues with a SQL Server application:

In this article, we’re going to look in a bit more detail about how to diagnose these and get to the bottom of performance issues.

Network performance issues broadly break down into problems relating to the speed of responses across the network (latency) or to the capacity of the network (bandwidth) i.e. how much data it can transmit in a set time.

Of course, the two are interconnected. If network traffic generated by your app (or other apps on the same network) is overwhelming the available bandwidth, this in turn could increase latency.

Latency is the time it takes to send a TCP packet between the app and the SQL Server. You incur latency on the way up to the DB and on the way down. People generally talk about latency in terms of round trip times: i.e. the time to get there and back

Figure 1 shows a 60-millisecond round trip. 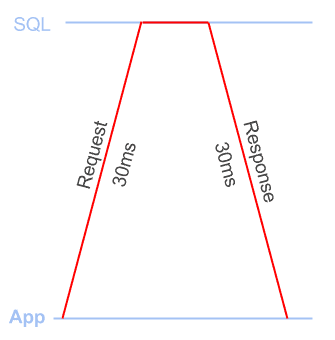 The amount of data that can be sent or received in an amount of time, normally measured in kb/s or Mb/s (megabits per second).

People often talk about the ‘size of your pipe’ when discussing bandwidth and it’s a good analogy (plus it sounds naughty): the fatter your pipe, the more data you can get through it at once.

Whenever the client sends a request to SQL Server, to retrieve the required data set, the total processing time required to fulfill a request comprises both:

Figure 2 provides a simple illustration of this concept. 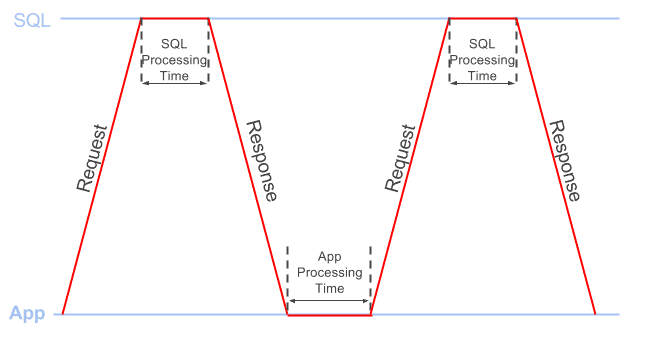 Where is the time being spent?

So how, when confronted with slow application response times, do we pinpoint quickly the root cause of the problem? The flowchart in Figure 3 shows a systematic way of approaching the problem. 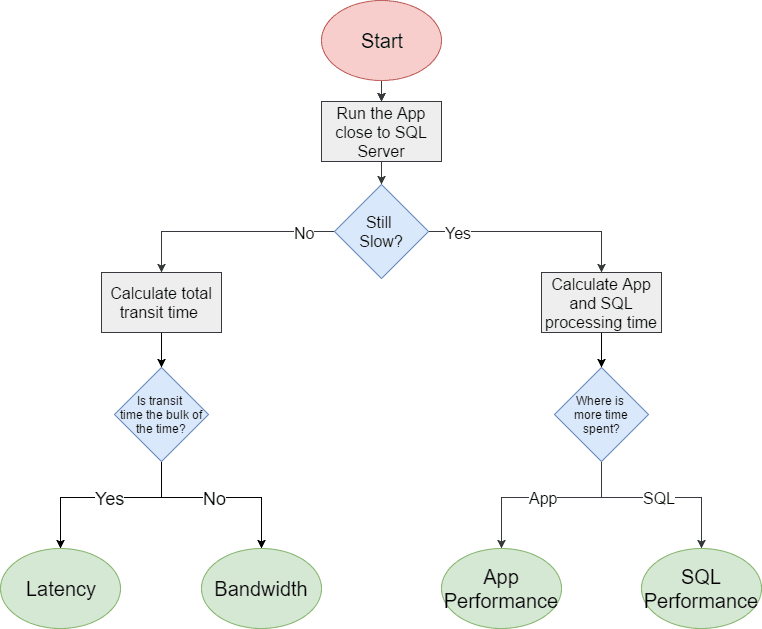 When investigating performance problems, you may have more than one issue. It’s worth looking at a few different parts of the app. Is it a general problem? Or are some parts much slower than others?

It’s best to start small. It will make life easier if you can focus on a specific area of the app that is particularly slow, for example let’s say when you click the “Select All” button on the invoices page, it takes 10 seconds to load the results. Focusing on a small repeatable workflow will let you isolate the issue.

The next question to answer, of course, is Why is it taking 10 seconds? The first and easiest way to narrow the issue down is to run the app as close to the SQL Server as possible, on the same machine, or on the same LAN.

If having effectively removed any network latency and bandwidth constraints it suddenly takes a second or less to select all the invoices, then you need to investigate what network problems might be eating up all the rest of the time.

If the app is still taking about 10 seconds to load the results, then congratulations, you’ve again eliminated 2 of the 4 issues! Now, you need to look at where the bulk of this processing time is being spent.

Let’s take a closer look at how to work out where the bulk of this time is being spent. You’ll need either Wireshark or SQL Profiler (whichever you’re more comfortable with).

To work out which one is causing your issue you can use either Wireshark or SQL Profiler as both can tell us the approximate app and SQL processing time (although the exact numbers may differ slightly).

We can use Wireshark to capture the network traffic while the workflow is executing. Using Wireshark allows us to filter out non-application traffic and look at the time difference between all the packets in the workflow.

To get approximate SQL processing time:

Although collecting diagnostic data using SQL Profiler is known to add some overhead to your workflow it should still give you a broad picture of the processing times. You can minimize this overhead by running a server-side trace, and then exporting the data as described below. Alternatively, if you’re confident with Extended Events and XQuery, you should be able to get similar data via that route.

Start by capturing a Profiler trace of the workflow, just using the “Standard (default)” trace template. Make sure that nothing else is hitting the database at the same time so you’re only capturing your traffic. Once you’ve captured the workload in the trace, save it to a trace table using File | Save As | Trace Table.

In SQL Management Studio, query the table you created with the following two queries to give you the approximate app and SQL processing times:

If the application is fast when run locally, it looks like you have network issues. At this point, you will need to know the latency between the application and SQL Server. You can get a rough idea of this from a ping, which will tell you the time it takes to make a round trip between the two. Try and take the measurement when the network is at low load as high network load can increase ping times.

If you count the number of queries the application issues, you can work out how much time is taken by latency.

To get the number of queries from Wireshark, you can apply the following filter and then look at the “displayed” count in the status bar:

To get the number of queries in SQL Profiler, create a trace table as described previously, and run the following query:

This should tell you if latency is your issue. If it’s not, then you have a bandwidth issue.

What a moment though. We haven’t explicitly seen a bandwidth issue, we just ruled out the other issues. How do we confirm it? Great question. It’s a bit fiddlier I’m afraid.

If you have a network-level device with traffic monitoring, and a dedicated connection to the SQL server, you can look and see if your workflow is saturating the available bandwidth.

Alternatively, you need to look at how much bandwidth the application uses when you know you don’t have a bandwidth bottleneck. To do this, you again need to run the application close to the database, capture the packets in Wireshark, and examine the bandwidth used by the application. Again, make sure you’re not running any other local SQL applications other than the one you’re trying to capture.

Once you have completed the capture in Wireshark:

Repeat the capture while running the application over the high latency network, and look again at the bandwidth used. If there is a large discrepancy between the two, then you are probably bandwidth constrained.

Of course, for an accurate comparison, you need to be running SQL Server and the application on similar hardware, in both tests. If, for example, SQL Server is running on less powerful hardware, it will generate less traffic across the network in a given time.

It’s quite possible you have multiple problems! However, after going through the steps outlines above, you should be able to account for all the time being spent to process the workflow. If the 10 seconds processing time turns out to comprise 6 seconds of SQL processing time, 3 seconds of transit time, and 1 second application processing time, then you know how to prioritize your investigations.

If the main problem is slow SQL processing times, then there is a lot of information out there about tuning and tracking down issues. For example, since we already captured a Profiler trace, Gail Shaw’s articles give a good overview of how to find the procedures and batches within the trace that contributed most to performance problems. Also, Jonathan Kehayias’s book is great for a deeper dive into troubleshooting common performance problems in SQL Server.

Conversely, if most of the time is being spent in client-side processing, you may want to consider profiling your application code to locate the issues. There are lots of profiling tools out there depending on your programming language (for example, for .NET languages you can use ANTS from Redgate or dotTrace from JetBrains).

A very common cause of performance problems, in our experience, is running “chatty” applications over high latency networks. A chatty application is one that sends many duplicate and unnecessary queries, making way more network round trips than necessary.

Often, these applications were originally developed on, and deployed to, a high-speed LAN and so the ‘chattiness’ never really caused a problem. What happens though, when the data moves to a different location, such as to the Cloud? Or a customer on a different continent tries to access it? Or you need to build geographically diverse disaster recovery environments? If you consider every query on a 1ms LAN will be 60x slower on a 60ms WAN, you can see how this can kill your performance.

In short, when writing a Client/Server application, you need to avoid frequent execution of the same queries, to minimize the number of necessary round trips to collect the required data. The two most common approaches to this are:

We’ve done a lot of research into these problems, while developing our Data Accelerator tool, and have adopted an approach that uses machine learning to predict what your application is about to do, and prefetch the required data, so it’s ready just in time for when the application requests it.

Make sure you work out where your problem is before you spend a lot of time and money on a possible solution. We’ve seen companies spend vast amounts of money and man hours optimizing SQL queries, when their biggest problems have been application performance issues. Conversely, we’ve seen companies putting more and more RAM or CPUs into a SQL server when this will never make up for the extra time the network latency is adding. If you can pinpoint where the workflow processing time is really being spent, you direct you time and efforts in the right way.

Hopefully this has given you some ideas of how to investigate your own app’s performance, or start to track down any issues you might have.

Dan works in London for Data Accelerator, a startup specializing in using machine learning to accelerate SQL traffic over a WAN/Internet connection by predicting what an app is going to do next. As a developer Dan has written SQL parsers in multiple languages and is possibly a little too familiar with the TDS protocol and Wireshark. Read more about Data Accelerator here: https://dataaccelerator.com or follow them on twitter.

View all articles by Dan Turner