The sqliosim utility is provided with SQL Server to test the I/O stability and 'correctness' of a server. It doesn't measure performance but simulates the read, write, checkpoint, backup, sort, and read-ahead activities of a typical SQL Server instance under load. It is generally used before installing SQL Server in order to ensure that new hardware can handle your expected loads. Bob Sheldon explains.

When we consider the features and functionality included with SQL Server, we sometimes overlook the utilities that build on and enhance SQL Server’s capabilities. Yet many of these programs can prove to be powerful adjuncts to our arsenal of tools. One such utility is sqliosim, a simulation tool that lets you stress test I/O activity on the disk subsystem that hosts the SQL Server data and log files.

The sqliosim utility simulates SQL Server read, write, sort, backup, checkpoint and read-ahead patterns for both user and system activity. The tool creates sample data and log files in order to perform SQL Server reliability and integrity tests on the disk subsystem. Because the utility runs independently of the SQL Server engine, you can use it before installing SQL Server in order to ensure that new hardware can handle your expected loads.

NOTE: The sqliosim tool is not designed for performance testing, only I/O stress testing. For example, you should not use the utility to perform benchmark tests or to determine a storage system’s I/O capacity. For this type of testing, a tool such as sqlio is a better fit.

Beginning with SQL Server 2008, sqliosim is included with your installation (in the Binn folder). For versions prior to SQL Server 2008, you can download the tool package at http://support.microsoft.com/kb/231619, where you can also view additional information about the utility.

If you download the package, you’ll find that it contains sample configuration files not included with the SQL Server installation. (We’ll be covering configuration files later in the article.) However, the utility itself is not as current as the one that comes with SQL Server 2008 or later, so be sure to use the one in the Binn folder even if you download the package.

Before we get into that discussion, however, you might want to add the path for the Binn folder to the Path environment variable on your system, if you haven’t already done so. The method you use to modify the Path system variable varies from one Windows operating to the next. In Windows 7, for example, one way to access the Path variable is to open Control Panel, click System and Security, and then click System. In the left pane, select Advanced system settings, which launches the System Properties dialog box. On the Advanced tab, click the Environment Variables button. When the Environmental Variables dialog box appears, select the Path variable in the System variables list, and then click Edit. This launches the Edit System Variable dialog box. In the Variable value text box, append the current value by adding a semi-colon and the path to the tablediff directory, as in ;C:\Program Files\Microsoft SQL Server\MSSQL11\MSSQL\Binn.

Once you’ve updated the Path variable, you’re ready to test the sqliosim utility, but first, a few words of warning:

When the sqliosim utility runs, it uses a set of default parameter values to control the various test-related operations. However, you can override some of the default values by including one or more of the utility’s supported options, which are described in Table 1.

Table 1: The options available to the sqliosim command-line utility

Now that we’ve gone over the basics, let’s get started. Open a command-prompt window and enter the following command, using the directory paths appropriate for your system:

We start with the utility name (sqliosim), followed by the -dir and -log options. In this case, I’m using the c:\datafiles\sim folder for the data and log files, as well as for the utility’s log file, which I’ve named simlog.xml.

When you execute the sqliosim command, the utility starts running its test and the command-prompt window displays processing information, such as that shown in Figure 1. The information is updated regularly throughout the testing.

Figure 1: Running a sqliosim command at a command prompt

It can take a fair amount of time to run the full test unless you override some of the default parameter values. However, you can stop the process at any time by pressing Ctrl+C.

If you double-click the log file (in this case, the simlog.xml file), it will open in Internet Explorer and display the events returned by the sqliosim utility during the test, at least that portion of the test you performed. Figure 2 shows what that file’s data might look like if you ran the test for only a couple minutes. 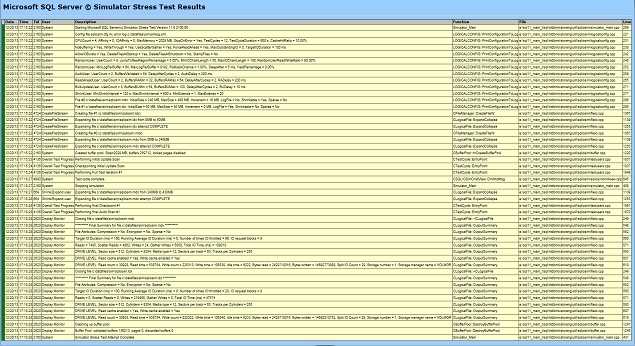 Although it’s difficult to read the content from a screenshot, you might be able to glean from this figure that the file contains information about the events generated by the utility, such as creating a file or performing an initial update scan. The log file provides details about each test pass, including any error and warning events that might have been generated.

You can instead view the file in Notepad or in another text editor. As Figure 3 shows, each XML element contains information about the individual events. 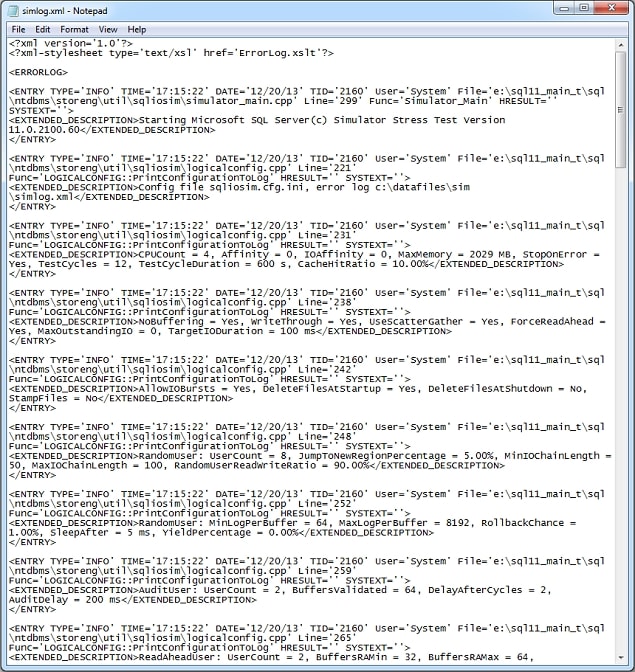 When you first run the sqliosim utility, you might want to perform a shorter and smaller test just to get a sense of if and how the tool is working. One way to do this is to include the -d and -size options, as shown in the following command:

By including these options, the main test cycle will last only 60 seconds, rather than the default 300 seconds, and the initial size of the data file will be only 2 MB, as opposed to the default 260 MB. However, although these settings will limit the test, the sqliosim utility will still run the default 12 test cycles. Unfortunately, the command-line utility does not support an option to control the number of test cycles. For that, we need to use a configuration file.

The easiest way to create a configuration file is to include the -save option in your sqliosim command. The option specifies the configuration file’s path and file name. The utility then generates a file that includes all the supported parameters and their values. Default values are always used unless options and their values are explicitly included in the sqliosim command. For example, the following command creates a configuration file that uses the c:\datafiles\sim directory for the data and log files as well as the log output file, named simlog.xml:

As you can see, the configuration file includes a number of sections. (I added the bold to make it easier to pick them out.) Each section contains a set of related parameters and their values:

Once you’ve created your configuration file, you can edit the parameter values in a text editor such as Notepad. For example, to make our initial demonstrations easier, we can change the TestCycles property in the [CONFIG] section from the default 12 to a setting of 1. Although Microsoft recommends that you perform at least 10 test cycles, starting with only one cycle lets you become familiar with the utility and better understand its capabilities.

Once you’ve updated your configuration file and saved the changes, you can call the file when you run your command, without having to specify any other options, as in the following example:

Although the sqliosim command-line utility provides a great deal of flexibility, at times you might want the ease of the graphical application (sqliosim.exe), also located in the Binn folder. To launch the utility, you need only double-click the executable. The main window will open, along with the Files and Configuration dialog box, shown in Figure 4. 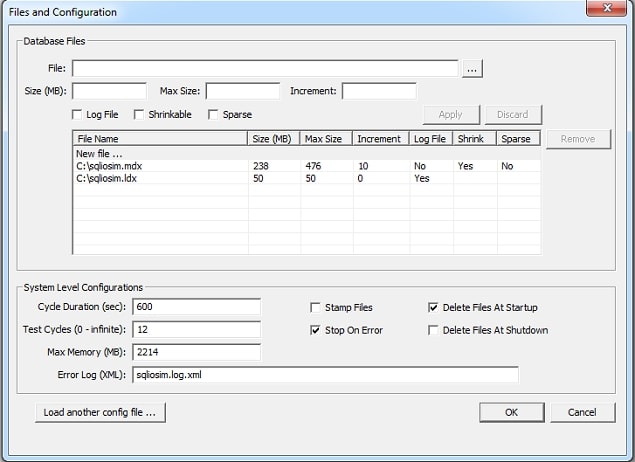 The sqliosim application takes the same parameters and default values as the command-line utility. However, you can change any of those values within the dialog box. To set values specific to the data or log file, you must select the file in the grid and then make the changes in the text boxes above the grid.

The sqliosim application also lets you use a custom configuration file. Simply click the Load another config file button and navigate to the file. The values from that file are then loaded into the Files and Configuration dialog box. Figure 5 shows the dialog box after adding the simconfig.ini file we created in the last section. 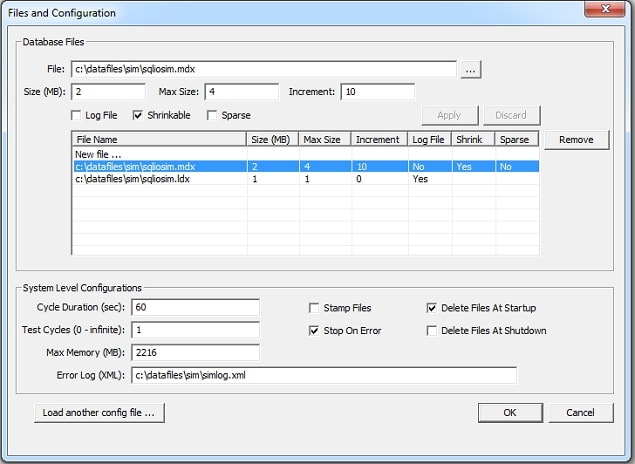 Figure 5: Loading a configuration file into the sqliosim graphical interface

As you can see, the path for the data and log files have been updated, as has the error log file and several other options. Once you’ve loaded the configuration file, click OK to close the dialog box and go to the main window. From there, click the Start button to begin the testing process. Figure 6 shows the sqliosim utility window with the test in progress. 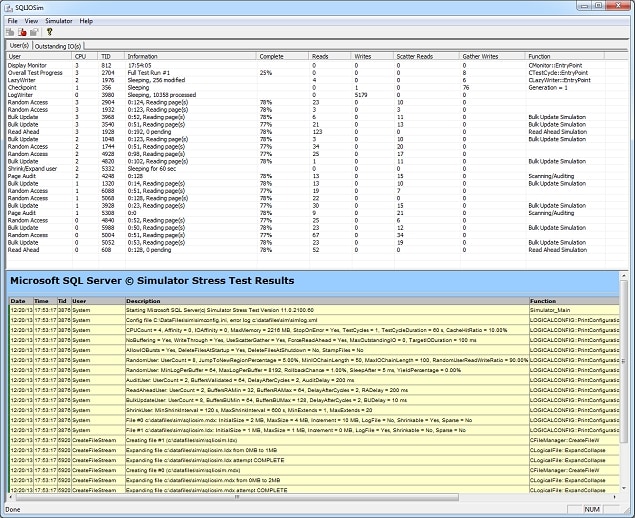 Figure 6: Running a stress test in the sqliosim graphical interface

Information about the testing process itself appears in the upper pane, with the details being updated constantly, as you saw at the command-prompt window when the test was running. The bottom pane shows the event data that is being logged to the output file. When the test has completed, only the logged output data is displayed, along with a message indicating that the test has completed, as shown in Figure 7. 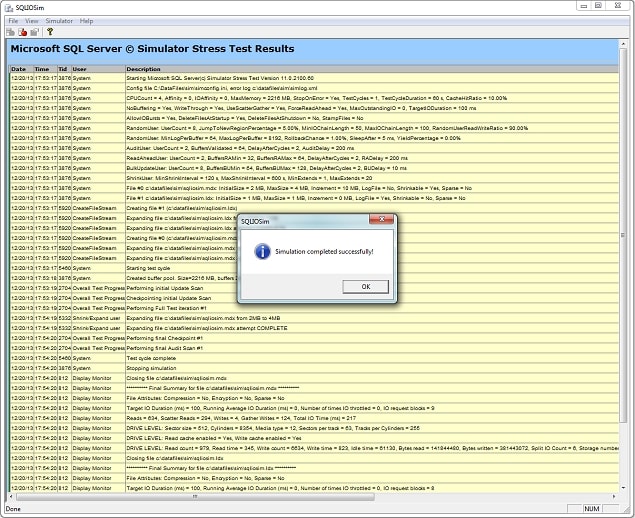 At this point, you need only click OK. You can then browse the log to review the details about the test. The log itself will contain information similar to what you saw when you viewed the log created by the sqliosim command-line utility. The graphical interface just makes things a bit easier when you’re running ad hoc tests. As pointed out earlier, however, if you want to automate your tests, stick with the command-line utility. But whichever you choose, each one provides you with a powerful tool for stress testing your disks for SQL Server I/O activity. And given that it’s already built into the product, you have little to lose by trying the utility.

0 2
I believe I’m not alone on this feeling: It seems like every time we use the Azure Portal some new feature appear. The features reproduce themselves faster than rabbits. Did you had this feeling before? Share your thoughts in the comments. This week, working with Azure, I found some new small features around and decided … Read more
0 2