SQL Server synonyms can be used to permanently alias database objects in the same or another database. In this article, Greg Larsen demonstrates how to use synonyms and the many reasons to consider using them.

We all remember the English lesson we had in grammar school where we learned about synonyms. Just in case you don’t remember, a synonym is a noun that has a similar meaning as other words; just like intelligent has the same meaning as smart. SQL Server allows you to create a synonym so you can define an alternate name for an object that already exists. Synonyms function like aliases on columns or tables. However, a synonym is created as an object in a database, instead of being temporally defined at runtime. In this article, I will explain how to create and use synonyms to help develop and manage TSQL code.

Why would you need or want a synonym?

The syntax for creating a synonym, as found in the Microsoft documentation, is shown in Listing 1.

A synonym is simple to create. It can reference an object using one, two or three-part naming for both SQL Server and Azure SQL Database. But only SQL Server supports four-part names for referencing base objects that reside a different instance of SQL Server.

Synonyms can be created that reference the following types of objects:

To better understand how to create, use and manage synonyms, I’ll go through a few examples. The examples will show you how to use synonyms that support different business situations, as well as how to manage synonyms.

Coordinating the renaming of an object

Once a database object has been created, and lots of application code has been written that references the object, it becomes a nightmare to rename the object. The nightmare comes from the amount of effort and coordination work required to make the name change without the application failing. If just one place is missed when coordinating the rename, the outcome could be disastrous. This is where a synonym can help minimize the risk associated with renaming a base object.

Suppose there is an application that has been built for a company that employs plumbers. Each plumber who has ever worked for the company is stored in a table named dbo.Plumber. The company has written a lot of code around this table to manage their business and their plumbers. Then one day, the company decides to expand its business to include electrical work. This expansion of the business now requires modifying their existing application code to support the new line of work. Additionally, they plan to write a lot of new code to support their expanding business. One of the modifications they want to make is to change the name of the dbo.Plumber table to dbo.Employee as soon as possible. This way, they can start using this new table name for any new code they plan to write, while they coordinate the name change for all the existing code.

By using a synonym, they can make the name change now, and ensure all the existing code doesn’t fail. Then as time allows, they can slowly change the old code to use the new table. Once all the legacy code has been changed to use the new name, then the synonym can be dropped. To rename the dbo.Plumber table and create the synonym, a DBA could execute the code in Listing 2.

Listing 2. Renaming base object and creating synonym to support a name change

Creating a synonym for security purposes

Suppose there was a data issue in the dbo.Article table that needed to be resolved by issuing SELECT, INSERT, UPDATE and/or DELETE statements in the production environment. To provide the developers update access to resolve this issue, a synonym with appropriate permissions could be created. To accomplish this the code in Listing 3 could be run.

Creating a synonym in another database

For this example, suppose there is a company that wants to create a mirrored database in a development environment so that parallel development efforts can take place. By parallel development, I mean one group of developers can work and write TSQL code in one database, while another group of developers can do development work in a different database. The only problem is the company DBA says there isn’t enough disk space to copy all the tables from the existing development database (CurrentDB) to the new mirrored development database (NewDB). In this situation, the DBA decides he can establish the new mirrored database by creating synonyms in the NewDB database to point to each of the big tables that can’t be mirrored due to lack of disk space. The code in Listing 4 shows how to create a synonym in the NewDB databases that points to one of those big tables that can’t be mirrored.

Listing 4. Creating a synonym that references table in another database

This also comes into play during a continuous integration build process. Referenced databases may not be in place or have different names during the process and keep the build from being successful.

Creating a synonym to reference objects on another server

There are times when an application might need to run some code on one server but reference a table on another server. For discussion, assume a server has limited storage space. Therefore, periodically an archive process is run that moves historical information to a different server, that I will call the archive server. If the application needs to select some data from the archive server, they could use a four-part name and a linked server to reference those objects on the archived server, or they could define a synonym.

Listing 5. Defining a synonym for a table on another server

By creating this synonym, an application can now use the name ClientHistory to reference the client history information that resides on the archived server instead of using the long four-part name ArchivedProd.MyApp.dbo.ClientHistory.

A synonym cannot reference another synonym. To demonstrate, this I will run the code in Listing 6 to create a new synonym in the NewDB database that references the dbo.BigTable synonym that I created using Listing 4.

Listing 6. Creating a synonym that references another synonym

When I execute the code in Listing 6, it runs without error and creates the new synonym named dbo.Second_BigTable. But if I try to execute the SELECT statement in Listing 7, I get the error in Figure 1.

Figure 1. Error when trying to use a synonym that references another synonym

The reason I got no error when I created the synonym, but I got an error when I executed the SELECT statement is because the code for a synonym is not validated at creation time, but it is validated at run time. This feature of delayed validation is a good thing. Delayed validation allows a DBA to create a synonym in advance of when the actual base object will be created.

If a base table for a synonym is renamed or moved, the synonym definition will need to be altered to reflect the change. The only problem is that there is no ALTER SYNONYM statement to help support renaming or moving of a based object. To change an existing synonym, it will need to be dropped and then recreated, using the new name and location of the base table.

Identifying the synonyms in a database

When working with a new database, it is always wise to review it to see if any synonyms have been defined. Without this review, you might assume a synonym reference is just a reference to a base object and thus cause confusion. There are two different methods for reviewing the synonyms defined in a database.

The first one is to use SSMS. To find the synonym definitions for a database using SSMS, follow these steps.

Figure 2 shows the synonyms added to the NewDB database. 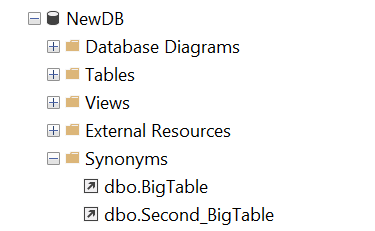 Figure 2. The synonyms in the NewDB database

The other method to display synonyms in a database is to write a query against the sys.synonyms catalog view in the context of the database where you want to explore for synonyms. An example of how to do that can be found in Listing 8.

Listing 8. Displaying all Synonyms in a Database using TSQL

If you plan to use synonyms, then you should be aware of a few issues with using them. Here is a list of some of those things that might trip you up when using a synonym.

Cannot retain permissions on a synonym when they are dropped.

Using synonyms causes confusion when someone doesn’t realize that synonyms are being used.

When creating synonyms that referencing objects on other servers for testing and debugging purposes you need to make sure you don’t accidentally update the data on those other servers unless of course, that is what you intend to do.

Depending on the version of SQL Server being used, IntelliSense may not pickup that a name is a synonym.

You cannot reference a synonym across a linked server. If this is tried, you will get an error like the one shown in Figure 3.

Figure 3. Error when trying to reference synonym across a linked server

Synonyms are a great way to simplify your code for a number of different reasons, like shortening up those long object names, or references tables in other databases, or instances of SQL Server. Synonyms help in the coordination of renaming base objects or changing their location over time. By creating a synonym, the reference to the synonym might look like a local table, when in fact it resides in a different database or even a different instance of SQL Server. Even with the confusion that can arise when using synonyms, the trade-off of using one might be well worth it for several situations. Next time you have to rename an object or copy an environment, you might want to consider whether a synonym will make this effort easier and more seamless.