This is the first part of a mini-series about Parallel Execution Skew and how to address it. Introduction So what does “Parallel Execution Skew” mean? With Oracle Enterprise Edition you can have Oracle automatically spread the processing of a single SQL statement across several worker processes in the hope to complete the processing in less elapsed wall-clock time. Note: The

This is the first part of a mini-series about Parallel Execution Skew and how to address it.

So what does “Parallel Execution Skew” mean? With Oracle Enterprise Edition you can have Oracle automatically spread the processing of a single SQL statement across several worker processes in the hope to complete the processing in less elapsed wall-clock time.

The important point to understand with Parallel Execution is that in order to perform parallel processing, a given task – in this case here the execution of a SQL statement – has to be divided and distributed across multiple worker processes and it only can speed up the execution if the processing is spread (ideally) evenly across the involved processes. In case there is an uneven distribution of work, the overall execution time depends on the processes that have to perform the majority of work, and in consequence other involved processes that perform the minority of work will be idle during that time.

So why does it sometimes happen that Oracle can’t automatically ensure an even work distribution? The Oracle query optimizer automatically generates the rules for the work distribution in case of Parallel SQL Execution and therefore follows certain generic strategies. For more complex operations like aggregations, sorts and joins Oracle follows certain rules to ensure in principle an efficient and correct processing.

Before we look at an example of Parallel Execution Skew, in order to have a baseline where we can see a good work distribution, here is our test case set-up and a simple two table join that can be run with serial and parallel execution to see how parallel execution in an ideal case can speed up the execution.

Note: If you want to reproduce the example and you’re using Oracle 12c it is important to stick to the same METHOD_OPT parameter used above – we’ll later see that Oracle 12c introduces a new feature that can detect and deal with Parallel Execution Skew automatically (at present in a limited number of scenarios) – and this feature requires a histogram to be triggered. Using FOR ALL COLUMNS SIZE 1 prevents the histogram creation and therefore allows reproducing the skew problem in 12c, too.

The table structure is straightforward for those two tables, the only noteworthy being the different variations of the T_2 FK column – one having a uniform value distribution (FK_ID_UNIFORM, actually representing a 1:1 relationship), one having one very popular value (FK_ID_SKEW),  and the third one being another variation of “popular” having a lot of NULLs (FK_ID_SPARSE).

And here is the simple query that can be run once serially, then using Parallel Execution:

Note: The query makes use of the new statement level hint syntax of the NO_PARALLEL hint – this is officially supported only from 11.2 on. In previous releases it requires the object level hint per object, like NO_PARALLEL(T_1) NO_PARALLEL(T_2). Instead you could also simply disable parallel query in the session: ALTER SESSION DISABLE PARALLEL QUERY to achieve the same on session level.

Note: There is an additional hint that is specific to Parallel Execution: PQ_DISTRIBUTE. For joins this hint tells the optimizer what kind of Parallel Distribution method to use for the join between T_1 and T_2 – in this case a hash distribution based on the join key. For more details regarding distribution methods and the PQ_DISTRIBUTE hint, please refer to my OTN Mini-Series “Understanding Parallel Execution” (see link above)

Note that I used Oracle 12c for all my tests.

We can see that confirmed for example by looking at the “Activity” tab of a Real-Time SQL Monitoring report (only available if you happen to have an additional Diagnostics + Tuning Pack license): 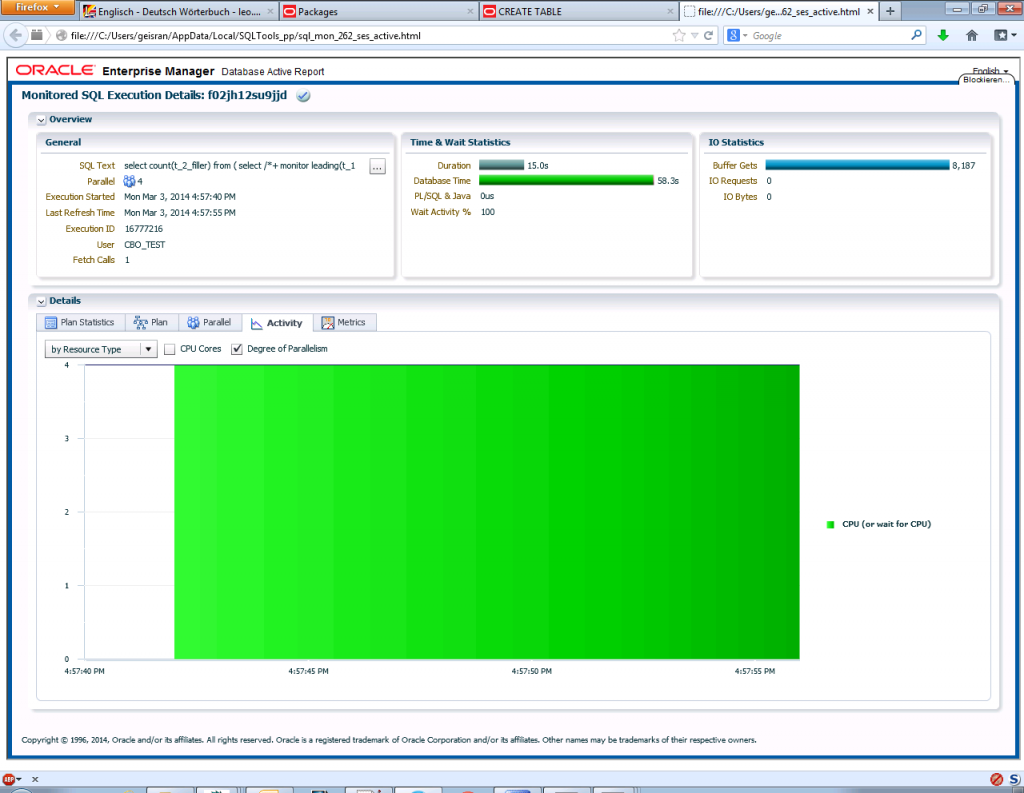 The “Activity” tab tells us that apart from a short duration at the beginning (the start-up overhead of Parallel Execution) four sessions were active all the time, so obviously the work was very evenly distributed among the Parallel Execution Servers.

Another interesting information from the Real-Time SQL Monitoring report is the “Database Time” in the “Time & Wait Statistics” section of the overview: It shows us a duration of 15 seconds, but a “Database Time” of 58 seconds – which is very similar to the duration / database time of the serial execution. So in total the database performed a similar amount of work, but it completed faster because the processing was spread among four worker processes.

Note: This is a simplified example that processes a very small amount of data and in principle is CPU bound by evaluating a silly regular expression. Therefore it minimizes the Parallel Execution overhead and scales pretty well provided you have sufficient CPU resources available. Typically with real-life examples that process larger amounts of data and use more complex execution plans you won’t achieve the almost perfect scaling as you see with this simple example. If you want to see the effect of the overhead more clearly see this post on my blog where I demonstrate a three table join based on the same test data setup.

Now that we’ve seen Parallel Execution scaling well we’ll have a look in the next part of the series at a quite similar case where the work distribution limits the speedup achieved.

View all articles by Randolf Geist

0 0
In the final part of this series I want to cover one last source of Parallel Execution Skew: Skew caused by Outer Joins. If you have Outer Joins where the majority of foreign key values is NULL, this can lead to the following symptoms: From a processing point of view for a parallel outer join, the NULL value in the foreign… Read more
0 0

Transformations by the Oracle Optimizer

0 4
To troubleshoot poorly performing SQL in Oracle, you must understand which transformations the optimizer has made. Jonathan Lewis demonstrates several possible optimizations for one query.… Read more
0 4