If you want to learn how to optimize and troubleshoot Hyper-V, then this book, written by Microsoft people whose day job is to assist customers with precisely with these issues, is a safe bet. It is not, however, a book for anyone struggling to come to grips with the basics of Hyper-V

This book is written by Microsoft FTEs (Full-time Employees) who work on the customer issues every day, so it is as rich in information as you’d suspect. There is no doubt that Hyper-V Server Virtualization is a hot topic amongst the virtualization administrators nowadays, but you cannot find one book that covers all aspects of Hyper-V networking within it. This book, as the title indicates, is geared primarily towards optimization, monitoring and troubleshooting of Hyper-V Networking.

Virtual Networking and this book

“Optimizing And Troubleshooting Hyper V Networking 2013” covers the best practices, tips, monitoring and diagnosing issues with Hyper-V virtual networking. You create virtual switches to provide connectivity for the virtual machines, but it is not enough merely to provide the connectivity for the virtual machine. You must also ensure that virtual networking components work efficiently and can be monitored. Once alerted to a problem, the administrator needs to diagnose and fix these issues rapidly. This book provides the information you need to run virtual networking components efficiently and also help you diagnose the issues without much network downtime. This is essential information: M any virtualization admins are unaware of which tool they can use to diagnose the issues with Hyper-v Networking. It is a challenge to minimize the network downtime without knowing the correct approaches to diagnose the issue and then get to the root cause.

Windows Server 2012 includes a number of new and enhanced networking features that can help reduce networking complexity while lowering costs, simplifying management tasks, and delivering services reliably and efficiently. Each section in this book is covered by a Microsoft FTE, which is knowledgeable in that area.

We learn why it is necessary to install separate network adapters on Hyper-V server and when you should utilize Windows Server 2012’s QoS policies to restrict usages of different types of traffic, for example “Live Migration”. This section also covers a topic on VLAN concepts and troubleshooting and the PowerShell cmdlets that you can use to get information on VLAN IDs.

You can not just sit and relax after implementing, for the first time, a technology in your server environment. You must also ensure that you monitor the techno logy after implementing it in production. You either use a set of networking tool s to monitor performance of Hyper-v Networking or use the available native tools. This section provides enough information as to how you can monitor a Hyper-V Networking environment by using the Performance Monitoring Tool available with windows. It provides details on performance counters you can use to monitor Physical Network Adapters, virtual network adapters and Hyper-V virtual switch.

This section is covered by Thomas Roettinger who is a Program Manager in the Partner and Customer Ecosystem Team at Microsoft.

This chapter focuses on diagnosing issues with Virtual Switch in particular. It explains several mechanisms to troubleshoot issues with Hyper-V virtual switch. For example, the performance counters that you can use to diagnose issue s with networking connectivity and how you can use the packet capture tool to get to the root cause. Windows Server 2012 introduces new feature s for debugging and generating log files for diagnostic issues with networking without following any tedious and time- consuming processes.

This section covers those considerations for configuring your cluster network, optimizing cluster health monitoring for transient cluster network failures, and networks used for the CSV redirected traffic. Hyper-V uses Windows Failure Cluster to implement high availability for virtual machines. The nodes in the cluster are monitored using the heartbeat. You learn about the different heartbeat configuration and how to modify these properties using a PowerShell cmdlet.

This section is covered by Subhasish Bhattacharya who is a Program Manager with the Clustering and High Availability team at Microsoft.

This section is explained by Keith Hill, a Senior Support Escalation Engineer with the Windows Server Core High Availability Team who provides a great amount of detail on “Single Root I/O Virtualization” feature which covers the basics of SRV, how SRV works, enabling SRV for virtual machines and walks us through a troubleshooting example.

This chapter has guidance provided by two individuals working at Microsoft. First, Nick Eales, a Senior Premier Field Engineer, demonstrates how to troubleshoot an issue involving two virtual machines that can’t communicate even though they are on different hosts but on the same virtual machine network. Then Tim Quinn, a Support Escalation Engineer, goes into detail concerning tracing the Hyper-V Network Virtualization components.

There are two sections covering networking on Multitenant.

Jason Dinwiddie, a Senior Consultant with Microsoft Consulting Services, describes in some detail the different scenarios you can use to implement multitenant networking using a single failover cluster of Hyper-V hosts. By choosing the right scenario you can optimize the performance of your environment, provide redundancy against various kinds of network failure, and ensure isolation between tenants.

In this chapter, Mark Ghazai, a Data Center Specialist with the Microsoft U.S. State and Local Government group, demonstrates how to troubleshoot network replication issues in an environment where Hyper-V Replica has been set up.

This chapter completely focuses on troubleshooting issues with Hyper-V Replica environment. It does not provide details on the basics of Hyper-V Replica. I would recommend you reading a series I wrote here which provides enough information on Hyper-V Replica.

The book also covers sections on other Hyper-V Networking features. For example, you can get more information on how to optimize and troubleshoot issues with Hyper-V Replica and other networking components. Although, the chapter “SMB Multichannel and CSV” does not provide enough detail on troubleshooting SMB and CSV components, but explains the mechanism used by the SMB Multichannel and CSV to redirect traffic, which is covered by Cristian Edwards Sabathe who is EMEA PFE Regional Workload Lead for Server Virtualization.

“Port Mirroring” chapter is covered by Thomas Roettinger, a Program Manager with the Partner and Customer Ecosystem Team at Microsoft who walks through a basic demonstration of how to use port mirroring. Thomas Roettinger also explains an example on running out of virtual machine queues (VMQ) in “Virtual Machine Queue” chapter.

Hyper-V Virtual networking is a broad topic. It is sometimes difficult to provide all resources in one book. Throughout this book, necessary links are provided for you to read more on the subject as shown in the below screenshot taken from the book. 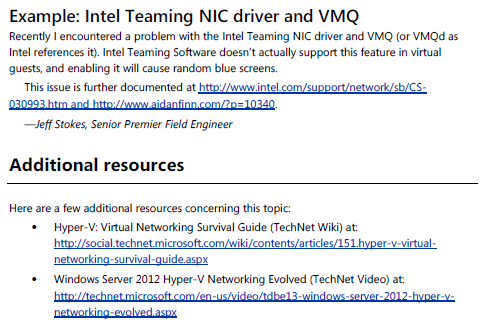 This book is essential for anyone who already has a sound knowledge of Hyper-V networking and who who needs to learn how to monitor, diagnose and optimize it. There are some topics which have been covered in great detail whereas other aspects are mentioned only in terms of troubleshooting. For example, the troubleshooting of Hyper-v Network Virtualization is covered in great detail but no light is shed on the basics.

From the beginning, the book provides information on networking tips and best practice items you should follow and then continue to focus on troubleshooting each networking component which are covered throughout the sections of this book.

Overall, this book is a very good resource for virtualization administrators who want to learn ways of reducing downtime with Hyper-V Networking by using the tools provided by Microsoft. It is great for helping to get to the root cause of any performance issues, but is certainly not recommended for a beginner with Hyper-V.

Some Books on Programming SQL Server 2012

0 17
It is a measure of the range of facilities that are available to the database developer nowadays that three different books on the same general topic of TSQL programming  can actually complement each other. … Read more
0 17