Querying Any Registry Information on Remote Computers via Script

You can automate a number of manual tasks using scripts, a  command line operation is always faster than a GUI operation.

Windows Registry has functioned as a big repository for the Operating System to store its static and volatile information since Windows 3.1! Many Windows Applications rely on storing information in the Windows Registry and administrators still need to query something on the remote computers every day. There are several scripts available online to query Windows Registry information on remote computers but these scripts query a specific registry value and then generate a report which is static in nature. The scripts you see on various web sites are sometimes hard to modify or written in a language which you’re not familiar with e.g. VBScript.

If you need to query registry information on remote computers, you either end up searching for it on the internet or write your own (provided you know scripting) which may take a considerable amount of time. In this article, I’m going to demonstrate a technique you can use to query “any” Windows Registry values remotely and have a report ready in CSV format!

This script ships with the following files and can be downloaded here.

The script provides the following features:

Before you run the script, please make sure the following conditions are true:

RegConfig.INI is a text file and can easily be modified in the Notepad.exe. RegConfig.INI looks like below and is located under C:\DynamicQuery folder: 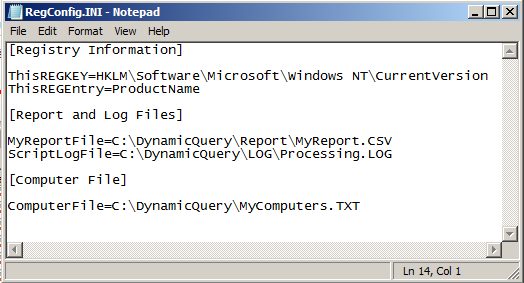 Script queries RegConfig.INI to locate the computer file by querying “ComputerFile” keyword as shown in the above screenshot.

Before you run the DynamicRegQuery.CMD script, please make sure all the conditions highlighted in the “Requirements” section of this article is true and RegConfig.INI has been modified for the registry Key and registry entry you want to query on the remote computers.

When you run the script, it checks to make sure RegConfig.INI can be found in the C:\DynamicQuery folder and all keywords in RegConfig.INI are available for script to process as shown in the above screenshot. The script will wait for you to confirm which you can do by typing “Y” (this is case sensitive, so make sure it’s a capital Y). Once you confirm, the script starts processing the computers from RemoteComputers.TXT and the result is displayed on the screen for all computers as shown below:

To check the report, open the C:\DynamicQuery\Report folder and click on the MyReport.CSV file. The results are stored in a CSV file as shown below:

We can see that the script ran successfully for computer “Techcomp1” but failed to run for other computers. This is the case because the other computers are not reachable or remote registry is disabled. The script does not require any port to be opened on the remote computer but at a minimum Remote Registry must be enabled and the computer must be reachable.

If script is not able to run for a compute properly, it stores the error information in the Processing.LOG file which is located under C:\DynamicQuery\LOG folder. A sample log is shown below: 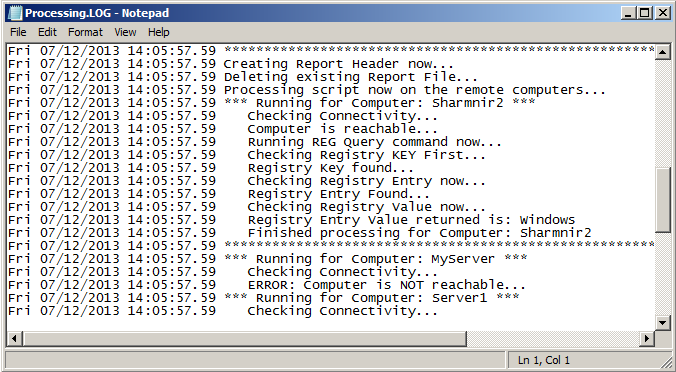 When testing database code in development, you usually have a lot of tests that aim to prove that the various processes such as ETL, reporting or the processing of an order, still work as they always did. If it is a changed process, you need to ensure that, from a known dataset, the process yields … Read more