Why and how you should automate database migrations

The desire to release features faster and deliver value to customers sooner is prompting many IT teams to adopt DevOps and Agile practices. By automating parts of the development process where possible and working in shorter cycles to release small changes more often, those teams that do well experience fewer errors and produce higher quality code.

All of which is good news, until it comes to the database. While DevOps is becoming standard practice in application development, the greatest challenge when integrating database development into a DevOps process is synchronizing application and database changes.

The issue often isn’t writing the database code to make the necessary changes. Instead, it’s deploying the changes and incorporating them with different changes from other developers at the same time. This is the point when many development teams see their releases falter, particularly when they use a migrations-based approach to deploy database changes.

As new code is developed to move from the old database scheme to the desired database schema, a script of each individual change is kept. To update the database with the changes, these migration scripts are run in sequence.

This often means a DBA has to sort through a pile of scripts and work out which ones to apply in what order, which can result in delays, problems and errors when the changes are deployed. This can be exacerbated further when teams are using branches and every script has to be painstakingly looked at, line by line, to work out the order they need to run in and highlight any conflicts.

Another factor now coming into play is the number of different databases and platforms being used by IT teams. While SQL Server or Oracle databases are still preferred for mission-critical and legacy applications, there is a rise in the take-up of open source databases like MySQL, PostgreSQL and MariaDB, along with cloud platforms like Aurora, Redshift and Snowflake.

This is further compounded by the variety of open source databases in use in the same organization. Percona’s latest Open Source Data Management Software Survey, for example, found that even more companies are choosing to run multiple databases in multiple locations over multiple platforms.

But how can teams address the inevitable complexity that arises, both within and across teams, and when multiple databases are in use, or their advantages are being explored?

One option over 300,000 active users favor, from single developers to large IT teams in major companies, is Flyway. The world’s most popular open source migrations framework for database deployments, it takes care of just one task – database migrations – and does it quickly and simply.

A highly configurable solution, it enables a bespoke migrations-based deployment strategy to be created that is easy to adopt and scale across teams. Simple to set up and easy to master, it allows developers to manage migration scripts with confidence across 20 of the most common database engines through a standardized process, regardless of the platform used, and automate their sequential deployment. By doing so, it removes the manual, time-consuming and error-prone process of deploying migration scripts and can even be integrated into a wider CI/CD release management process.

As a result, teams can deliver updates, enhancements and fixes to customers more frequently, with developers aligning database and application development practices, and Ops teams no longer being weighed down by migration issues. More importantly, Flyway ensures that teams working on different platforms all have a consistent way of working, allowing them to be more flexible in responding to changing business needs.

The advantages of open source software

Flyway’s origins as an open source tool also bring other significant benefits. Open source software is gaining ground with development teams because it is developed by professionals for professionals, and offers high quality and support, low costs and no vendor lock-in.

While Flyway remains a community-based open source tool with thousands upon thousands of users as well as active contributors to the code base, it also has a dedicated development team behind it. This enables new features to be constantly developed for both the free Community version and the paid-for business version, Flyway Teams.

This gives development teams a route to prove the value of the solution using the Community version, without any up-front costs or commitment. Teams can make the first steps to demonstrate the value Flyway brings to DevOps practices, enabling the business case to be made for investing in the advanced features which Flyway Teams offers, such as:

To find out more about Flyway, download the whitepaper, Enabling fast and easy database migrations for high-performing DevOps teams.

To see just how fast and easy those database migrations are, download a fully-functional, 30-day free trial of the Flyway Teams Edition. 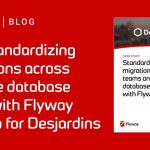 A new case study shows how Desjardins uses Flyway Teams to standardize the way migration scripts are created and versioned across its multi-database estate, which includes Oracle, SQL Server and PostgreSQL. With assets of over $350 billion and seven million members and clients, Desjardins is the leading financial cooperative in North America. Originally established in

Why Would You Pay for Flyway?

Flyway is an open-source database deployment tool that also includes a paid tier called Teams. Since it’s open-source, you can just download Flyway and run it for free. You’ll get a robust DevOps tool to assist you in deploying your databases just like you deploy your code. It just works. So, why would you even

Version control for your database. Robust schema evolution across all your environments and technologies.

We’re busy planning the PASS Data Community Summit 2022 and this year’s hybrid conference has, by far, produced one of the most successful call for speakers ever. There have been an outstanding 863 sessions submitted by 516 speakers, so a huge thank you to everyone who supported and took part in the call. As... Read more

Development teams are under increasing pressure to keep up with the demand for faster delivery of database changes, while ensuring code quality isn’t compromised. This pressure comes from both business requirements and industry expectations. The 2021 Accelerate State of Database DevOps report reveals that the number of teams who are elite performers is increasing... Read more

Why Would You Pay for Flyway?

Flyway is an open-source database deployment tool that also includes a paid tier called Teams. Since it’s open-source, you can just download Flyway and run it for free. You’ll get a robust DevOps tool to assist you in deploying your databases just like you deploy your code. It just works. So, why would you... Read more