'Desired State Configuration (DSC) is an essential part of the configuration, management and maintenance of Windows-based servers. It allows a PowerShell script to specify the configuration of the machine using a declarative model in a simple standard way that is easy to maintain and understand. Nicolas introduces the basic DSC concepts and provides a simple example of using the 'Push' model of DSC.

I, like most other system administrators, want to be able to completely automate the configuration of a server. It means that you can copy files, deploy registry key, software, remove a Windows Feature, etc… It is not just to simplify the task of maintaining it, but also to control the configuration to the extent that I can be confident that it hasn’t been changed. PowerShell 4 upwards provides the functionality to do this, with a feature known as ‘Desired State Configuration’ (DSC).

This article aims to provide an initial overall view of the Desired State Configuration. It will introduce to DSC, its syntax and its use. It will show you a simple example of how to apply a DSC configuration

What is Desired State Configuration?

The management and maintenance of servers quickly becomes complex without standardisation. PowerShell allows us many ways of responding to different problems and occasionally bypassing certain restrictive techniques. The danger is that we end up with a plethora of scripts in order to manage a server, all more complicated than the other, and this works. We do much better with a standard way of automating a task

DSC gives us a declarative model for system configuration management. What that really means is that we can specify how we want a workstation or server (a ‘node’) to be configured and we leave it to PowerShell and the Windows Workflow engine to make it happen on those target ‘nodes’. We don’t have to specify how we want it to happen.

The main advantages of DSC are:

In my articles, I often use the term ‘machine’ as if it were equivalent to a ‘server’. In this article, however, it is important to emphasise that DSC may be used on several servers but also on workstations. I like to use Group Policy Object (GPO) coupled to System Center Configuration Manager (SCCM) as my day-to-day method of installing and updating software but as time goes on, I can’t help but notice that these tools are becoming duplications in the management of the devices.

Desired State Configuration is integrated to Framework 4.0, which means that the compatible platforms with DSC are:

There are two types of architecture with DSC:

To summarise, I compiled these two architectures in a diagram so as to understand better: 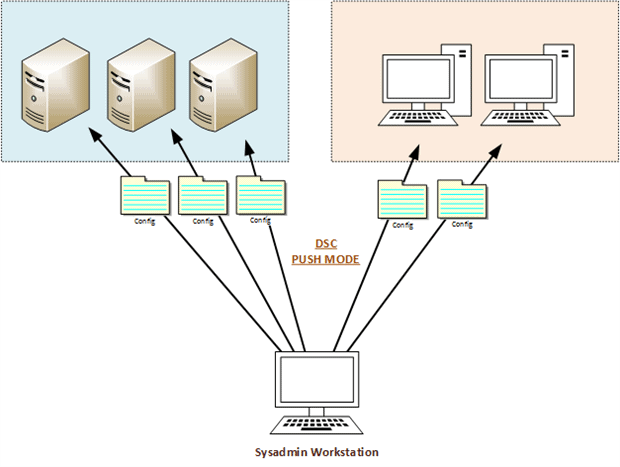 In this design, only one-way communication is possible. It is the administrator that sends the configuration to the machines. 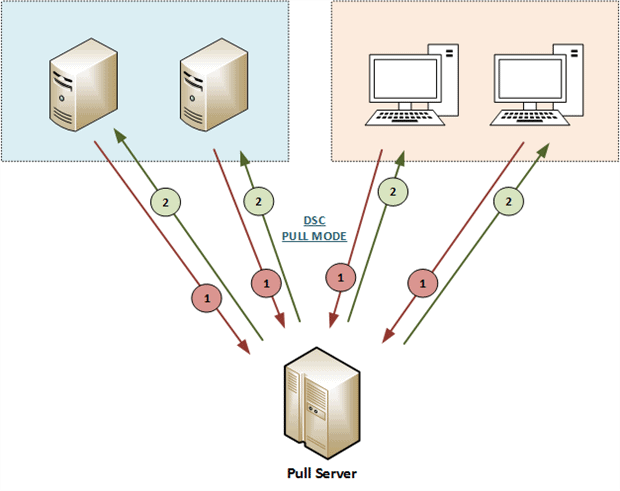 The advantages of this scenario are:

Note: You will notice that, in these two architectures, we push configurations onto the machines. By default, DSC is not used to deploy users’ configurations.

What do we call a DSC resource? It is simple, this is what we will be able to configure on the nodes. By default, DSC is supplied with several resources which are listed with the Get- DSCResource cmdlet:

Therefore, with these resources you have the means to configure for example Windows services, registry key or create local users. Here is a summary of basic resources with their descriptions:

To simplify the notion of a DSC ‘resource’, you can compare it to a PowerShell module. It is important to note that the resources used in a configuration must be present on the nodes as well as on your workstation if you are using push mode, or they should be on the “Pull Server”.

These few resources allow you to begin using DSC, but you are likely to need more functionality as your use of DSC increases At that point, it is possible to add extra resources with the DSC Resource Kit: https://gallery.technet.microsoft.com/scriptcenter/DSC-Resource-Kit-All-c449312d

This resource kit was published by the Windows PowerShell Team. Each new publication mentions a “Wave” number. Since August 2015, the resources have been made available from the PowerShell Gallery: http://www.powershellgallery.com/

To install them, all you need to do is to copy and paste them into your PowerShell modules folder:

Now if I look once again at the list of available resources on my workstation, I notice that the configuration possibilities have clearly increased. I now have the means to configure an Active Directory, SQL services… 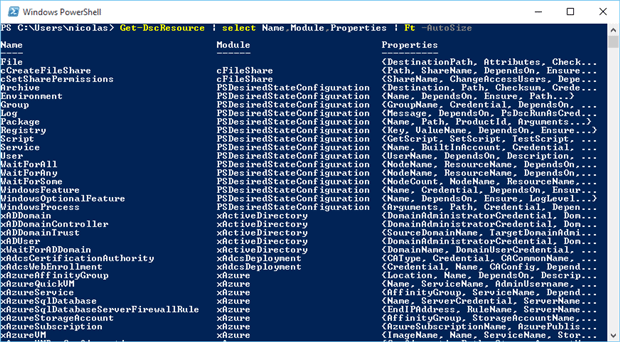 As you can imagine, it is now possible to create one’s own DSC resources by defining what you want to configure on the nodes. We shall see this in detail later.

Until now, I have talked about several terms: Configuration, Resource and Node. These terms have a precise meaning in the context of DSC, so it is important to understand how to use them. Here is a classic DSC configuration structure:

Part 1: the key word “Configuration” is followed by the name of the configuration. You are free to write what you wish.

Part 2: This block contains the parameters that are used in the configuration

Part 3: The block node indicates to DSC to deploy this configuration on these machines

Part 4: It is the resource that you want to configure. Here, I point to the resource “File” and “WindowsFeature” followed by a friendly name.

Part 5: Contains properties of the resource as “key=value” pairs

You will notice that the syntax is relatively close to the PowerShell functions. Let’s now take a simple example in which I would like to copy the “hosts” file on two nodes. Herewith the associated configuration:

My configuration is called DeployHostFile and it contains three mandatory parameters ($Servers, $SourceFile, $DestinationFile). The section “Node” indicates that it deploys a resource ‘File’ type on several machines. But how can we find out the properties of a DSC resource? The Get- DSCResource cmdlet followed by the – syntax parameter displays the syntax and the properties accepted by that resource.

It is equally possible to obtain them from the following page: https://msdn.microsoft.com/en-us/powershell/dsc/builtinresource

Now that you have configured what you wished, all you need to do is to call the DeployHostFile function as you would do for a classic PowerShell function:

Here I want to deploy this file: "\\Share\Hosts" on two machines "ADM01","ADM11" in the following folder "C:\Windows\System32\drivers\etc\"

What has really happened?

A DSC configuration is based on one or more “MOF” files (Managed Object Format – more information at this address: https://msdn.microsoft.com/en-us/library/aa823192(v=vs.85).aspx). When a configuration is executed it will create a MOF file by node.

Here I obtain two .MOF files in the directory defined with the help of parameter -OutputPath "C:\DeployHostFile\". These files are then used to describe how a machine must be configured. The MOF file contains the DSC configuration directives.

For the more inquisitive, here is the structure of the ADM11.mof file: 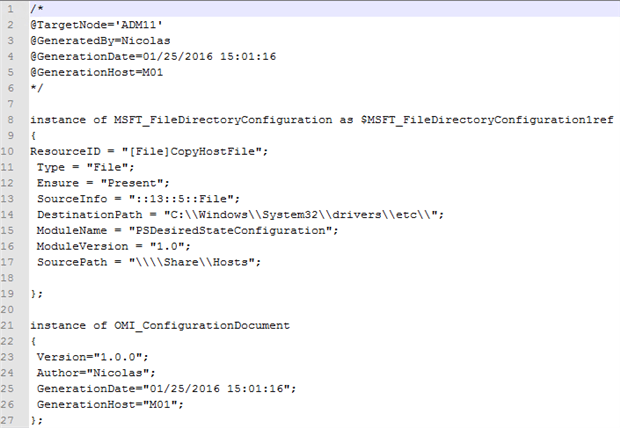 Given that we are in a “push mode”, a manual action is requested so as to deploy this configuration on the nodes. That is done via the Start- DscConfiguration cmdlet while pointing to the directory that contains the applicable .mof files: 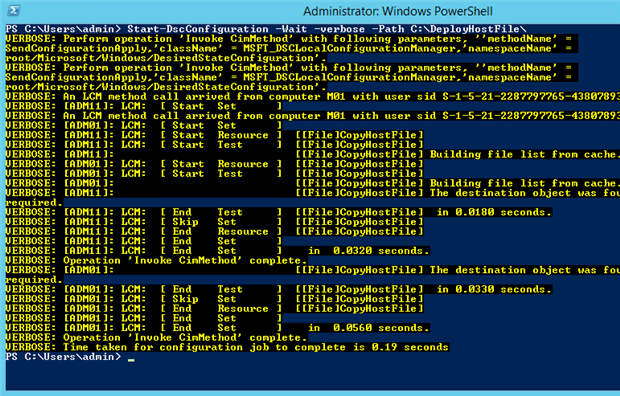 We have just done our first configuration via DSC. The -Wait parameter tells that you want to run the command interactively. Now if I connect on one of my nodes, I notice that the file has been copied. If I delete this file and rerun the previous command, the file will again be deployed.

Finally, what have we done with these few PowerShell command lines? So as to really understand this process, I have summarised it in a diagram:

In the above diagram, the actions happen solely on my workstation. I generate the two .mof files locally by executing the DeployHostFile function.

The second diagram describes the deployment of the configuration contained in the .mof files on my two nodes with the Start- DSCConfiguration cmdlet.

To end this article, it is important to explain one last fundamental concept of DSC: the ‘Local Configuration Manager’ or LCM is the execution engine of DSC. It works on each node and it is this that will apply the configurations. When sending a configuration to a node, LCM will analyse the .mof file. After reading the file, it calls all DSC resources that are present on the node so as to configure the machine as requested. Finally, its role is to control configuration-drift on the machine.

The configuration of LCM may be obtained with the Get- DSCLocalConfigurationManager cmdlet:

The properties of LCM are also called “MetaConfiguration” and these can be altered. In the above screenshot, only few properties have associated values:

AllowModuleOverwrite: This property allows the modules present on the machine to be overwritten when you download a new module from internet.

ConfigurationModeFrequencyMins: the LCM verifies every thirty minutes (by default) that there is no configuration drift.

RebootNodeIfNeeded: Indicates whether the node can be restarted automatically. Certain actions need a reboot of the node when the configuration is applied.

RefreshFrequencyMins: This property Indicates the frequency (by default fifteen minutes) to which the LCM tries to obtain its configuration from the Pull Server.

I hope that this article has helped you to increase your knowledge about DSC. We have mainly studied the “Push mode” because this mode provides a simple and rapid way of using DSC. But we shall see in a subsequent article that the more suitable mode in a production environment is the “Pull mode”.

Before one can get into practical details, there are many DSC ideas and terms to become familiar with. and that is why this article is divided into several sections so as to explain DSC and illustrate all its power. You will soon notice that DSC is a wonderful tool for administrators because it allows great flexibility of use and will simplify your regular tasks. Furthermore, everyone who has a minimum knowledge on PowerShell will quickly be able to use DSC.

All these examples are intended to provide a basis that you can adapt to your environment in order to let you explore DSC in more details.