When you force a query plan via the Query Store, you will need to track what happens: Sometimes the request to force a plan will fail, and you will want to know when and why. There are several ways of getting feedback, ranging from the built-in reports to using extended events. Enrico explains the details.

In one of my previous articles about the Query Store I briefly touched on the subject of forcing an execution plan via the Query Store. There is, however, much more to relate than I could fit in the previous introduction article. In this article, I’ll be explaining how you can set up a test to find out what happens when you force a plan, both through the Query Store built-in reports and via Query Store’s own DMVs. I’ll then use these to demonstrate what happens when plan-forcing fails, and what is causing the failure.

In my “Forcing Execution Plans using the Query Store” article I described how it was easier to force a specific execution plan than it was to manually build a plan guide: However, I didn’t go into more detail about the way that the Query Store records forced plans or what happens when execution plans can no longer be forced.

In order to get several plans for a single query inside the Query Store, I created a stored procedure that retrieves data from the SalesOrderDetail table based on the ProductID inside the AdventureWorks database.

The next step is to execute the sp_SalesbyProduct stored procedure. I am executing the stored procedure twice with different parameters, 710 and 870. I picked both these parameter values deliberately, basing my choice on how the table data is distributed inside the statistics of the table. Because there are only 44 sales inside the SalesOrderDetail table for Product ID 710, the Query Optimizer resorts to using an ‘Index Seek’ operation. There are a lot more sales for Product ID 870, 4688 to be exact. For such a high number of rows the Query Optimizer chooses to scan the entire table and uses an Index Scan operation.

Through the Query Store built-in reports, I can see that two different plans were used when executing the T-SQL above. One of the execution plans uses an Index Seek operation to retrieve the data, whereas the other uses an Index Scan.

By running the stored procedure above, the execution plan is forced as shown by the little “V” on top of the circle depicting the specific execution plan in figure 2 below. 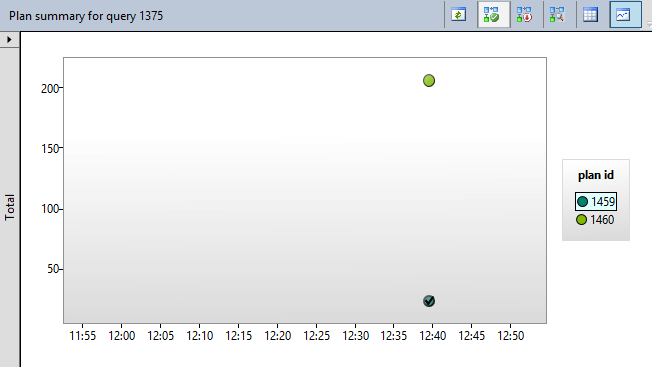 Instead, the Query Store records those plans that are forced inside one of its own DMVs: sys.query_store_plan. By running the following query, we can retrieve all the plans that were forced using the Query Store including some additional information such as the number of occasions that the plan-forcing failed.

As you have seen in figure 4, the Query Store also records information when it isn’t able to force the execution plan, such as the number of times that it failed to force the plan and the last reason for failure.

As it turns out, there are various reasons why the Query Store is unable to force the execution plan that we want. Let’s take a look at some of those reasons for failure through some examples.

For starters, what would happen if you remove an index that the forced execution plan uses? The plan we forced earlier happens to use the IX_SalesOrderDetail_ProductID index on the SalesOrderDetail table for an Index Seek operation, so let’s disable the index!

We can show this by running our stored procedure again, this time with a product ID of 870. Without plan forcing, this would result in an Index Scan operation and as you can see in figure 6 below we do not get an execution plan forced on the query.

Figure 6:  the old plan instead of the forced plan is returned after disabling the index it used

If we run our query to grab forced plan information from the Query Store we can see if, and why, it failed to force the execution plan.

So what happens when we enable our index again? Would the Query Store go back to forcing the execution plan again?

Yes, it does!
Directly after rebuilding the index (a rebuild is required to enable the index) the Query Store is able to force the execution plan again.

We can also choose for a more elegant method, removing a specific execution plan from the Query Store. For this we can use the stored procedure sys.query_store_remove_plan followed with the execution plan ID.

However, if we run the command above we are confronted by the error message shown below in figure 9.

The message is pretty clear, as long as the execution plan is being forced for a query it can only be deleted by purging the entire Query Store.

Next to the example where we removed the index to make the plan forcing fail, there are a few more reasons why an execution plan couldn’t be forced through the Query Store:

Let’s set up an Extended Event session to track plan force failures using the example where we removed the index from the table that we are querying.

The Extended Event that we need is called query_store_plan_forcing_failed and it records the error number, message, query ID and the plan ID. 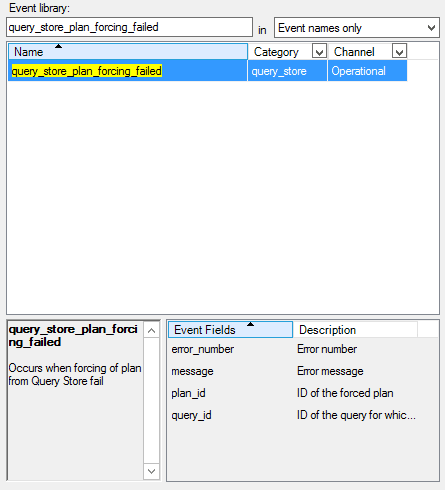 To keep things quick and simple, I scripted out the creation of the Extended Event session:

After starting the Extended Event session, I disabled the IX_SalesOrderDetail_ProductID index on the SalesOrderDetail table again and executed the sp_SalesbyProduct stored procedure:

Figure 10: Index Scan execution plan is used instead of the forced plan

There is a ring buffer for the session that we created in order to monitor the Query Store plan force failures. If we take a look at the Extended Event data collected inside the ring buffer, we get to see a lot more information than was returned by the Query Store DMV.

As you can see in figure 11 we can see when the extended event triggered, in this case 2016-11-23 at 19:19:06. We can also see the query ID with a value of “1” and the plan ID, also a value of “1” in this case. The error_number of “8712” corresponds with the error description “NO_INDEX” we also see in the sys.query_store_plan DMV. Interestingly enough, the “message” we see recorded in the extended event session indicates we used a plan hint that specified an index that no longer exists. We didn’t use any plan hints inside the stored procedure we used for testing so it seems that this error message is reused.

In this article we took a look at what happens when you force an execution plan via the Query Store and how you can identify plans that were forced. Through an example we took a look at what happens when the Query Store is unable to force an execution plan and how we can find out why plan-forcing failed through the sys.query_store_plan DMV. Finally, we used an Extended Events session to gather additional information that isn’t available through the Query Store DMVs, including a date/time of the plan force failure and an error message.

In this article, Shel Burkow uses the SQL execution plan from the previous article to write a program in Scala.… Read more