There are some obvious advantages to having the Query Store, but what is the performance impact that it is likely to have on a busy OLTP database server? It is early days, of course and until we get more experience we have to rely on Microsoft's estimate of a performance impact of 3-5% on average. However, this will depend on a number of factors such as usage an the way it is configured. Enrico explores some of these factors in order to give a clearer picture of what you should expect.

With the release of the first Community Technology Preview (CTP) of SQL Server 2016 we were finally able to play around with one of the most anticipated new features, the Query Store. In this series of articles wel take a look at every aspect of the Query Store, how it can give you valuable performance insights and even increase query performance!

In this final article in the Query Store series we will take a look at the price of all these great new features when we analyze the performance of the Query Store.

If you read the first article in the Query Store series, The SQL Server 2016 Query Store: Overview and Architecture, you would have seen that Microsoft put a lot of thought into the process of capturing and storing query runtime statistics and Execution Plans to minimize the impact of the capture of these metrics. By storing the query metrics and plans into memory first, expensive physical IOs to the storage subsystem are avoided. However, to persist the data, the Query Store will have to store it on the physical storage subsystem eventually and the frequency with which this occurs depends on the data flush interval setting. Flushing Query Store data quicker means more physical IOs to the storage subsystem, setting the flush interval to a higher value means less physical IOs but the downside is that it increases the chance of losing Query Store data when a SQL Server crash or restart occurs.

Let’s take a more detailed look at the way the Query Stores persists its data to the storage subsystem.

The Query Store itself doesn’t persist the data it holds in memory to the storage subsystem. Instead it places the data inside an asynchronous queue. From there, an internal process will write the data inside the queue to the storage subsystem. By using this asynchronous queue, the writes are not directly processed but are, instead, scheduled and the Query Store process can continue without waiting for the data write to complete.

In the previous section, we said that the Data Flush Interval setting controls the interval at which the Query Store persists its data to the storage subsystem. However, this is not entirely true. As a matter of fact the Data Flush Interval only represents the interval that Query Store data is added to the asynchronous queue. After it is placed in the queue, the speed at which the data is persisted to the storage subsystem depends on the internal asynchronous writer process.

Another important thing to mention is that the Data Flush Interval only effects query runtime information. Query texts and Execution Plans are added to the asynchronous queue immediately to avoid data loss of those objects.

Because a picture says more than a thousand words, figure 26 shows the behavior above.

With the release of the Query Store in SQL Server 2016, a number of new Windows Performance Monitor (Perfmon) counters were added that directly relate to the Query Store. All of these new counters can be found under the category SQLServer :Query Store as shown in Figure 27 below. 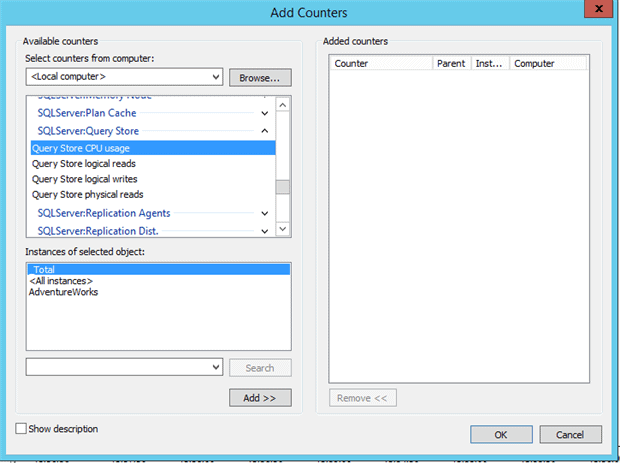 At the time of writing this article, there are four counters available to monitor Query Store performance through Perfmon:

All of these new Query Store Perfmon counters can be selected per-database, for all databases or just the total. 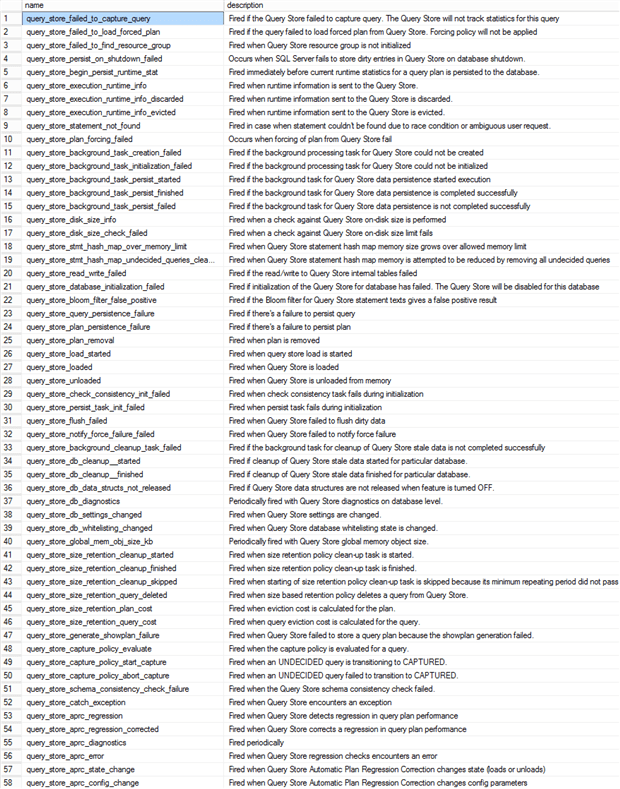 With every SQL Server version, new wait types become available that allow you to track extra resource waits. The Query Store also adds a number of new wait types, 17 in SQL Server 2016 CTP3, and they are easily identified through the QDS_ prefix in the wait type name as shown in Figure 30.

For now, none of these wait types are documented at all so we can only guess at their function.

So far it seems that two wait types are constantly being recorded by SQL Server, QDS_PERSIST_TASK_MAIN_LOOP_SLEEP and QDS_ASYNC_QUEUE. If you were to query the sys.dm_os_waiting_tasks DMV with the Query Store enabled you will definitely see these two wait types as shown in Figure 31.

The QDS_ASYNC_QUEUE behaves much in the same way, but it only seems to flush its wait times to the sys.dm_os_wait_stats DMV whenever either the configuration of the Query Store changed, SQL Server is restarted or the Query Store is flushed. By the name of this wait type, I am guessing it has something to do with the asynchronous queue we discussed earlier.

Because SQL Server 2016, and thus the Query Store, hasn’t officially been released yet, it is difficult to see how much impact the Query Store will have on the performance of your SQL Server Instance. From what I saw so far during my testing, it doesn’t seem to have such a big impact, even when hundreds of concurrent connections are constantly firing random queries that the Query Store needs to process, but time will tell when more people will be working with SQL Server 2016 after its release.

This concludes the fifth, and final, article in the Query Store series. Hopefully this series of articles gave you a good idea what the Query Store is, how it works and the performance insight it can give you!