Luca Cardelli: Geek of the Week

Luca Cardelli is probably best known for Polyphonic C# and Biocomputing, but he has designed a number of experimental languages and published a variety of papers on Theoretical Computing subjects such as type theory and operational semantics. He is now Principal Researcher at Microsoft Research in Cambridge, and head of the Programming Principles and Tools and Security groups. We sent a slightly apprehensive Richard Morris to ask him about DNA Computing

Although Luca Cardelli is now a well-known figure in Cambridge, he was born near Montecatini in Italy, he first studied computer science at the University of Pisa before heading to Scotland and studying for a Ph.D in computer science at the University of Edinburgh. Since then he has worked for Bell Labs and at Digital Equipment Corporation, Systems Research Centre in Palo Alto. 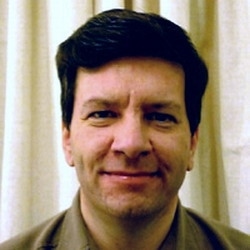 His research has been in establishing the semantic and type-theoretic foundations of object-oriented languages, resulting in the 1996 book A Theory of Objects with Martin Abadi.

“I have been reading
Scientific American
every month since I
was a teenager:
I was always
fascinated by…
biochemistry, but I
never thought I would
be doing it seriously.”

Luca is a Fellow of the Royal Society, an ACM Fellow, an Elected Member of the Academia Europaea, a long-standing member of EATCS, in 2007, Luca won the Senior AITO Ole-Johan Dahl and Kristen Nygaard award which honoured his pioneering work on object-orientation.

He says the most exciting Modula-3 design meeting ever, was abruptly interrupted by the San Francisco 7.1 earthquake. He is apparently the 45th most cited computer scientist in the world and the third most acknowledged. He is currently the assistant director at Microsoft Research in Cambridge, where is now researching DNA computing models.