Website performance testing tools give results that are very subjective to interpret.

Users begin to abandon websites if they have to wait more than 5 seconds for a page to download.

Users begin to become frustrated if they have to wait more than one second for a page to download.

A small number of reports have made statements and or attempted measurements about the relationship between page download times and the users’ emotional reaction. In a number that has been widely quoted, Nielsen reported that “if a web page takes longer than 10 seconds to download then a user is likely to lose interest”. However there is no experimental nor statistical derivation for the figure of 10 seconds – indeed it appears to be plucked from the air. In 1999 more detailed experiments were reported that made measurements of frustration, ‘lostness*’ and how difficult users found tasks in applications with varying download times. Financial inducements were given to people undertaking the tasks, and the download times were 1, 30 and 60 seconds. These results showed that longer download times had no influence on the perception of task difficulty and ‘lostness’. Frustration was measured as being very slightly influenced by time but only if the download time was greater than 30 seconds. Other reviews in the literature also present results that show that users do not care about page download times. We find these results to be extremely surprising and contradictory to our own impressions of web applications – where we feel that download times play an important part in the levels of frustration experienced by ourselves and the majority of website users. We believe that the financial inducements, the poorly-chosen time intervals and the complexity of the experiments masked the effects of long download times in the studies reviewed. In addition, web user behavior responses to download times are highly likely to have changed over the last 4 years.

In order to investigate this discrepancy we have conducted an online survey that produces definite answers to the question of page download time and the users’ satisfaction.

In page 1 we told people a little bit about the survey. 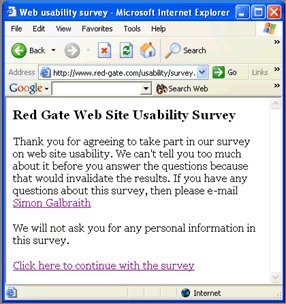 After they clicked “Continue”, they were made to wait for a random length of time between 0-30 seconds. We kept a connection open so that we could tell if people abandoned the survey or hit Refresh. 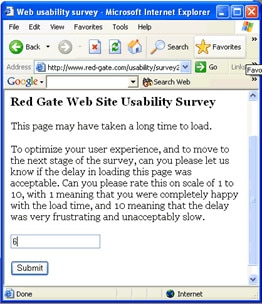 If they got through to this page we asked them to tell us how frustrating they had found the wait. 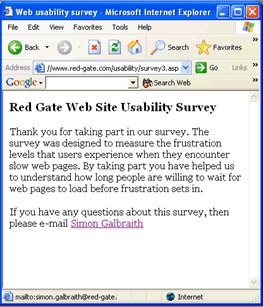 This screen was shown to people who gave us their frustration rating.

This allowed us to make the following measurements:

The aim is to allow us to make the following correlations:

Reasons behind this approach

We reduced the number of variables that could influence the results to one – the page download time. We told respondents as little as possible about the survey so that they responded as they would do to any slow page. We offered no financial inducements to make people wait for information. And we made the task extremely simple – filling in one number. We asked people for no personal data so that they wouldn’t feel they were part of a marketing scam. In taking this approach we aimed to avoid the multiple variables that have made previous attempts to examine this issue hard to interpret.

In addition to these measurements we also measured:

The IP address of the user. The time and date. The browser type. The operating system of the user’s computer.

These were used to ensure that the data was consistent. For example it helped us know if the same person had filled in the survey multiple times.

At the time of writing there were 63 respondents to the survey. Although this number is relatively small it is slightly more than the numbers involved in previous studies. The cost of getting more users would be relatively small.

Table 1. The average recorded frustration level against different time intervals and other data from the survey. 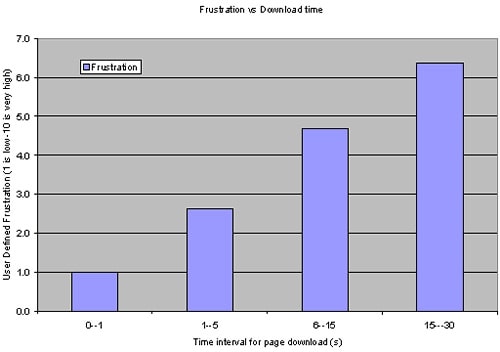 Figure 2. A plot of the user recorded frustration vs. the page download time.

The percentage that abandons or refreshes before filling in the second part of the survey is 35%. One individual abandoned after less than one second – this skews the results in the very first interval due to the small sample size.

This survey gives a clear indication that frustration develops after a second or so of waiting. If a user is required to wait between 5 and 15 seconds there is a significant chance that a user will abandon a website rather than wait for the information. Any wait beyond that is highly likely to cause the user to abandon the site.

The frustration due to page download times of web application users has been shown to be rapidly rising after a wait of around a second. After 5 seconds wait, significant numbers of users feel sufficiently frustrated to abandon a site rather than wait for the information.

A greater number of respondents in this survey would give us additional confidence in the conclusions.

One piece of work that would be of great interest to many website owners would be to test the widely-held belief that frustration and abandonment depend on the type of site being visited. It is often said that bank users are less likely to be frustrated than normal surfers.

Another area where this would be interesting would be to assess whether commonly used devices indicating that something is happening (such as a scrolling bar) make people more patient and/or less frustrated.

Finally, we thank all respondents, frustrated or otherwise, for their contribution to the survey.

View all articles by Simon Galbraith