Working with Windows Containers and Docker: Save the Data

Docker continues to make improvements in their products running on Windows. In this article, Nicolas Prigent explains how to share data between Windows containers and the container host. As a bonus, he also shows how to run a Linux container on Windows Server 2016.

This is my latest article in this series about Windows Containers and Docker. I began writing this series one year ago, and since then there have been some great improvements. Before going deeper, I just want to describe the different versions of Docker that exist today in case you were not in the Docker ‘sphere’ or if you have just started using Docker. On March 2nd 2017, Docker changed their version format, and also changed the name of the Docker Engine package to either Docker Community Edition or Docker Enterprise Edition.

As Docker said, the Community Edition is great for developers and ops teams starting to build container apps. If you want to download this edition, go to the Docker Store. Once the download and installation are completed, you can run the package called Docker For Windows. At the time of writing this article, I installed Docker CE v18.03.

Confirm that you can run a simple container:

If you work with Docker v18.03, then one of the main features is the ability to run both Windows and Linux images side by side, instead of having to switch Docker from Linux to Windows mode. Let’s confirm you are running the daemon in experimental mode:

Or through the GUI: 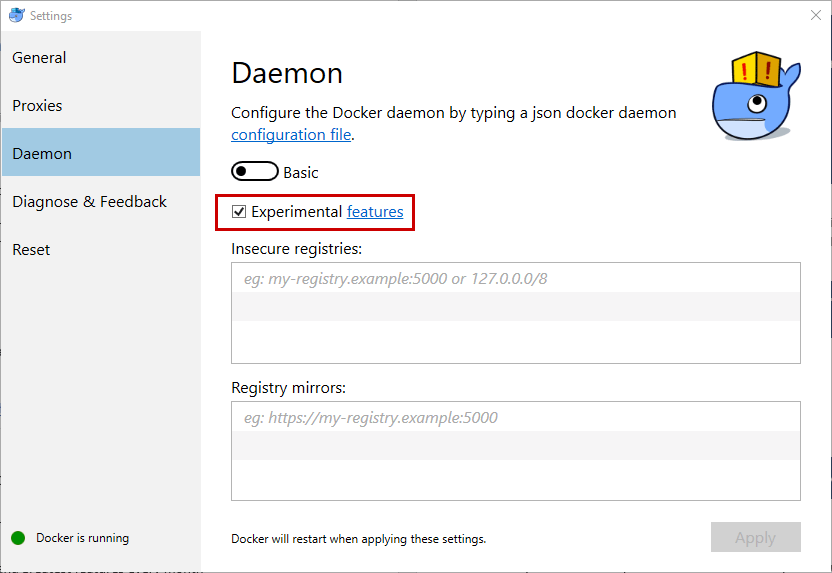 Now, use the platform=linux parameter in Windows Container mode to run Linux images.

If you work with a previous version of Docker, it will run Linux containers by default. So, you must modify this setting and switch to Windows Container mode using either the Docker tray-menu: 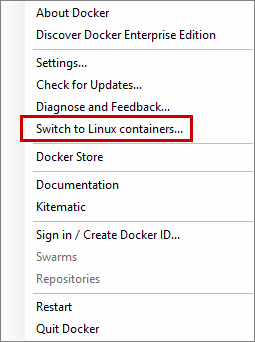 or by running the following command in a PowerShell prompt

And that’s all. Docker CE is up and running on your Windows 10!

Now, you can go to the Docker Hub to find out which Container Images are available. For instance, you can run a simple Windows Container that contains PowerShell Core:

And you can very easily configure your Docker engine using the GUI Docker For Windows: 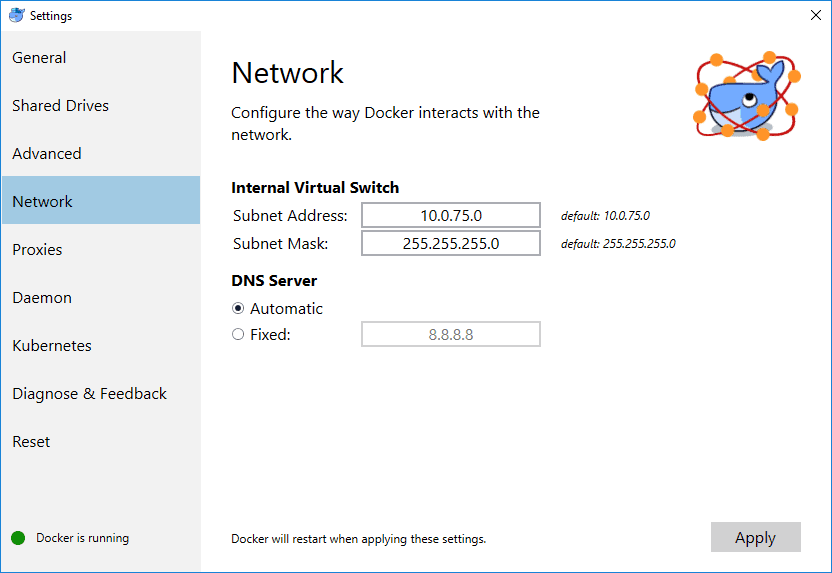 As you may notice, the –Force parameter is used to install the very latest version of Docker EE. And then a restart of the Windows container Host is performed. This article will demonstrate using Docker EE v17.10 on Windows Server 2016.

To summarize, Docker CE has the same core features as Docker Enterprise Edition, so don’t be afraid, you can use Docker CE instead of Docker EE. Nonetheless, if you want to run Docker in production, I recommend installing at least Docker EE Basic.

Imagine that you run a Windows Container and have some important data inside the container. Yes, containers are ephemeral, but you may want to save this data outside the container for many reasons. Well, you can easily share data between the Container Host and a Windows Container. Furthermore, you can also share data between two Windows Containers if you need to. This feature is very useful for Multi-Container Applications. For instance, applications need to share access to data or persist data after a container is deleted such as for databases or log files. This feature is called ‘Docker Volumes’.

In this section, I will describe how Docker Volumes work and explain four different ways to share data with containers:

Note: Given that I will switch between the container host and containers, I will add a comment before each command.

To create a Docker Volume, type the following command:

To view all the existing Docker Volumes on the container host, type: 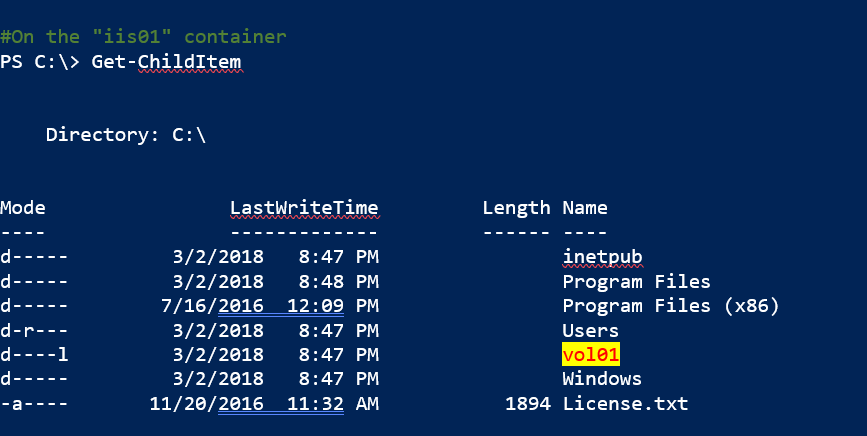 Now, create a simple text file on the container host:

Confirm that the file exists on the Container as well:

In order to inspect the Container, run the following command and check the Mounts section:

Some of you are probably wondering if it’s possible to move the storage location? Fortunately, yes! To perform this task, you will need to create a configuration file called daemon.json:

Then, provide the new storage location by adding this to the daemon.json file:

Next, restart the Docker service. Create a new volume to confirm that the volume is created under the new Data Root folder:

The folder for the new Data Root folder will be created automatically. Be careful, older volumes are not moved automatically and existing containers and volumes will no longer be seen by Docker. Note that you can remove an existing Docker Volume using Docker volume rm <volume name>.

Start by creating a new Container called iis02 based on the nanoserver/iis image and attach a volume to it. Note that you don’t need to specify the Data Root folder because Docker will create the directory with a random folder name. Then create a file on the new volume.

Confirm that the file exists on the container host:

During the last step, you created a new Container and attached a new Docker Volume. Now, you will create a second Container called iis03 and attach the same Docker Volume C:/vol03 using the –volumes-from parameter:

Confirm that the volume is mounted. Create a new text file called vol03-from-iis03.txt:

On the container host, both files are visible:

By default, access on a Docker Volume is in Read/Write mode. In some cases, you will need to limit access to the Docker Volume. You can set a volume as Read Only. Create a Container called db01 and attach a volume with Read Only (RO) access:

Now, try to create a file on this volume, but the task will fail:

Copying Data from the Container Host to a Container

The Docker Attach command will connect to the iis02 Container. Be careful, you must press ENTER twice to connect to your container. Check to see if the package exists in the Container: 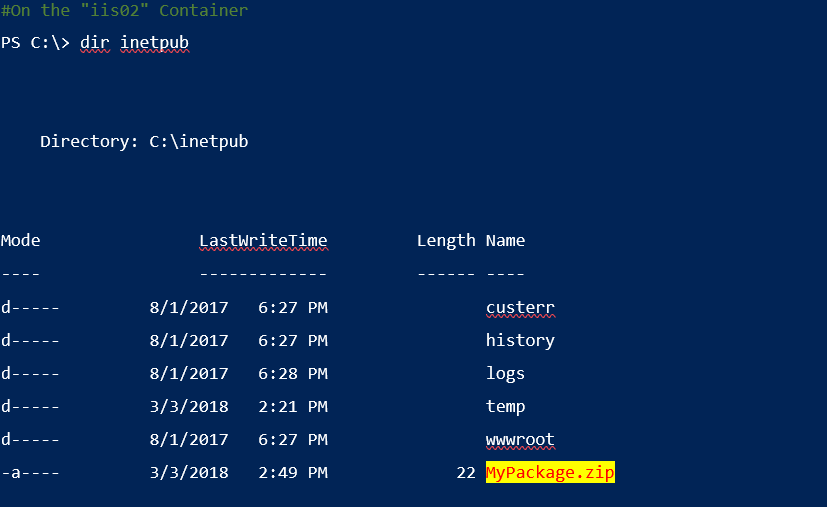 Creating a Docker Volume from a DockerFile

You can mount a Docker Volume using a DockerFile. In the following example, you will create a nanoserver/iis image using the VOLUME keyword to mount a folder. Be sure to create the C:\Volume directory on the host if it doesn’t exist.

Navigate to the directory where this Dockerfile is located and run the following command:

A custom Docker image has been created:

So now, every container created using this image will automatically mount the volume:

A new file called mount.txt has been successfully created on the container host. You can confirm the mount path with Docker inspect:

This method is very useful in DevOps mode or when you want to deploy multiple Windows Containers in bulk mode. The Volume will be mounted automatically during the deployment.

Then the Docker daemon runs as a Windows process, and every time you start a Linux container, Docker launches a minimal Virtual Machine with a Linux kernel. However, the ‘VM’ is not user-visible in the Hyper-V console! It is still not possible to run Windows and Linux Docker containers side-by-side. It means that you must enable LCOW to run Linux containers, and disable LCOW to run Windows containers. If you work on Windows 10, please note that LCOW support is only available on the Edge channel.

Start by enabling the LCOW feature with the following commands.

The feature has been enabled, so you can create a Linux container based on Ubuntu using the following command:

At this step, you are running in the Ubuntu container on your Windows Server:

To finish with a funny Linux container, you can run the NyanCat container: 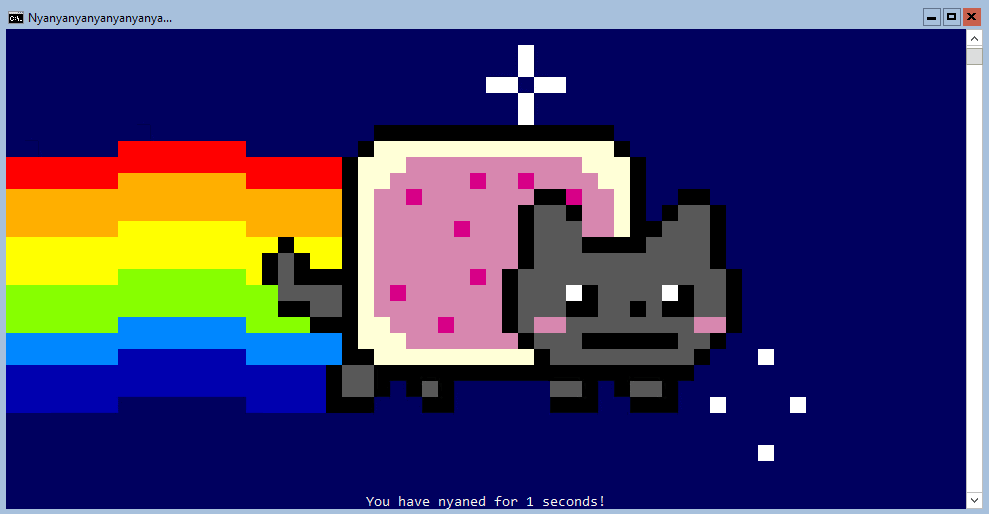 This article of the series discussed the new Docker versions that you can use depending your needs. The first one is Docker CE which is for development and testing environment, and the second one is Docker EE which is for production use. Then you saw:

And to finish, you ran Linux containers on a Windows container host, which is a great improvement for sysadmin and developers. Currently, LCOW is still in beta and not supported In a production environment so please use it for dev purposes.

In the next article, I will discuss about how to manage and orchestrate our Windows containers with Kubernetes and Swarm.