Python has become a popular language because of it’s simplicity and vast library support. In this article, Julio Sampaio demonstrates how to get started creating Python apps in Visual Studio.

Python has become one of the most beloved programming languages of all time. It is flexible, easy to learn and code, open-source, and supported in all the major operating systems out there. For example, it offers a wide range of frameworks and libraries developed by the community to support and facilitate web applications. If you’re a .NET developer, chances are that you have played around with Python already, but, did you know that you can create Python projects in Visual Studio?

This article explores this feature via the creation of a Python web project. It’s important to note, however, that except for the ability to mix code from .NET and Python through projects such as IronPython, this won’t be the main focus here. Perhaps it will be for a future article. 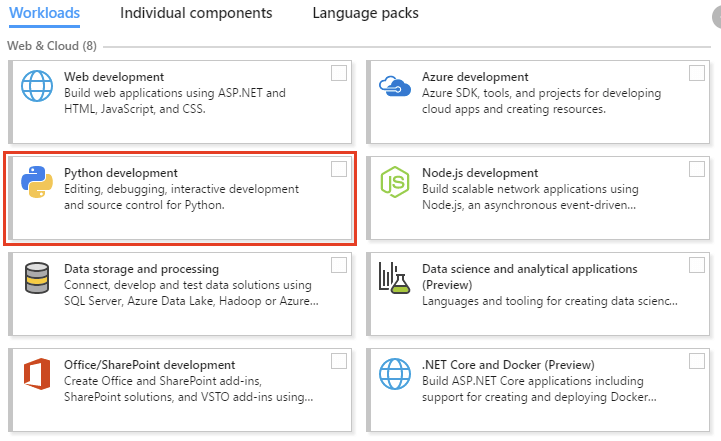 Proceed with the installation. Then, move on to the project creation step.

Open Visual Studio, then go to Create a new project and select Python on the Languages combo box. Select the Python Application template on the listed options, as shown in Figure 2. 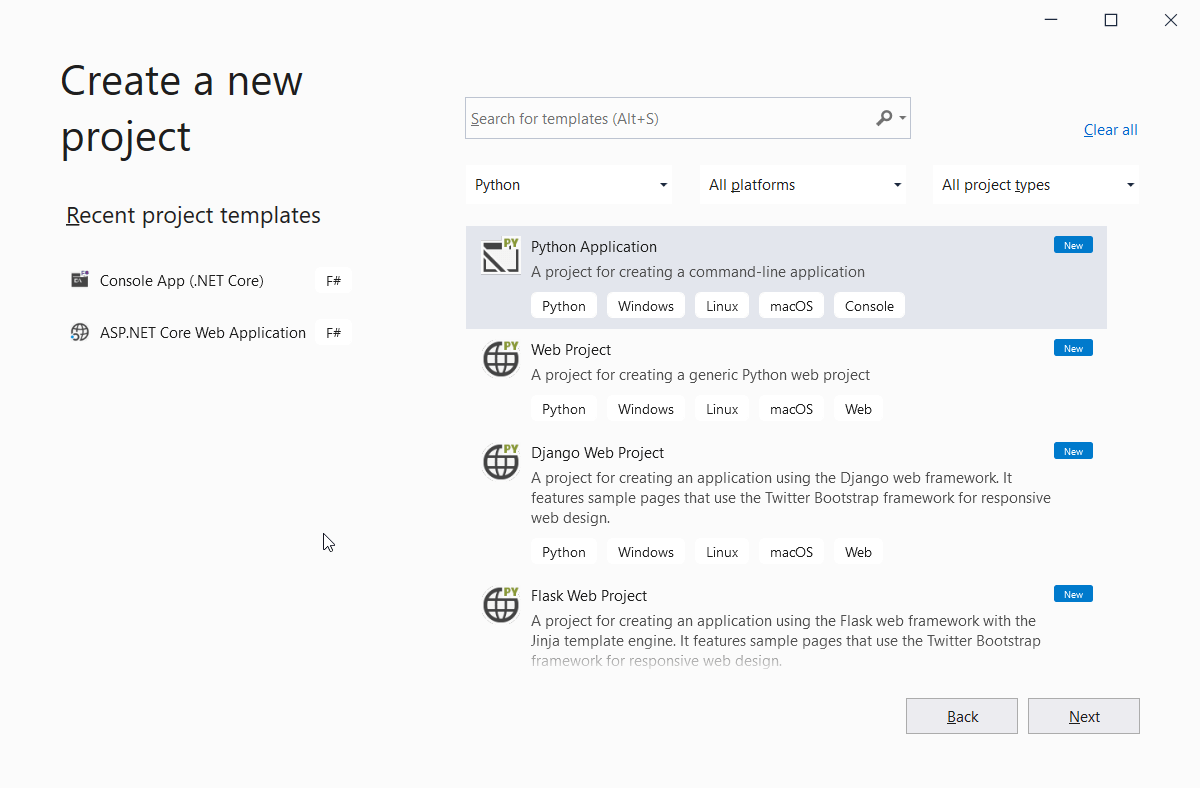 Hit Next, select a location, name your solution, and, finally, click the OK button. Use Figure 3 as a reference. 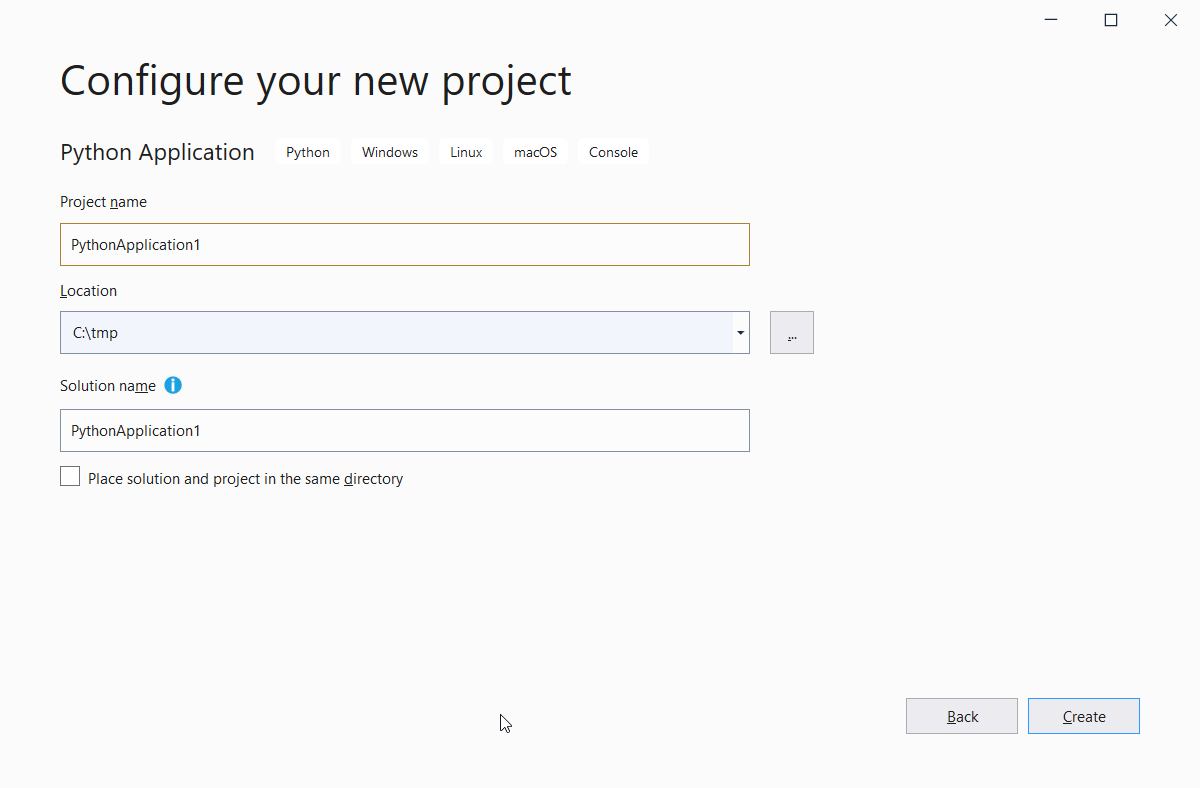 When the process finishes, you’ll be able to see the newly created project along with its config files. It’s important to state that the structure of Python applications is slightly different from the ones you’re used to dealing with .NET. Take a look at Figure 4 below. 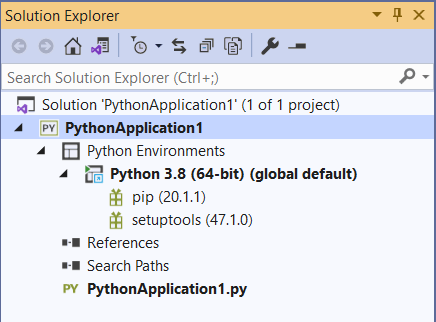 There are a few highlights to take note of:

When you open the PythonApplication1.py file, you’ll see that it’s empty. Let’s run the classic Hello World example in Python to test it out.

Place the following code snippet within the Python file:

To run it, do as you would with any ordinary .NET application. Just hit the Start button available at the top bar, as shown in Figure 5.

Figure 5. Starting up the application

Note also that the Python version used to run the program is displayed within the following combo box. If you have other versions installed, you can pick the one you desire here. 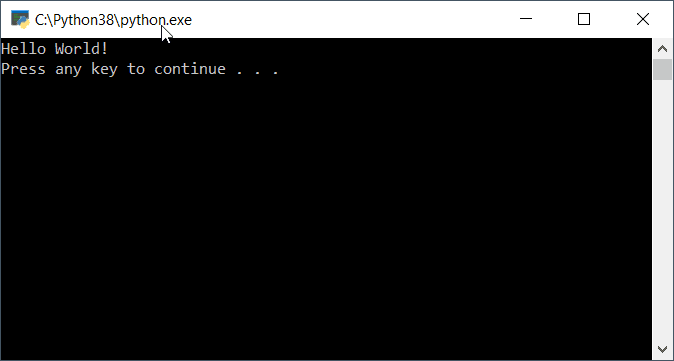 You can also import the same built-in libraries you’re used to doing when coding with Python elsewhere. Take the following example that calculates the power of two numbers:

First, import the sys module. Then, import the pow function contained within the math module. Figure 7 shows the result of this program execution. 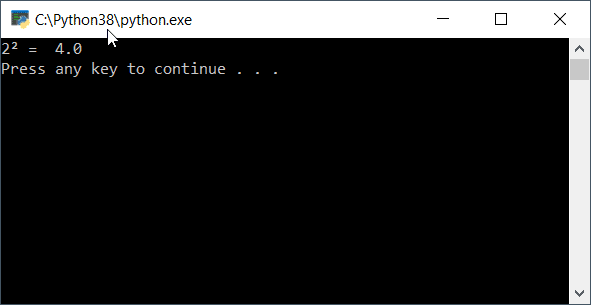 Visual Studio also understands the primary functions that compose the language and allow for code completion, which is something essential when coding with an IDE. Figure 8 illustrates how the auto-completion feature happens along with Visual Studio. 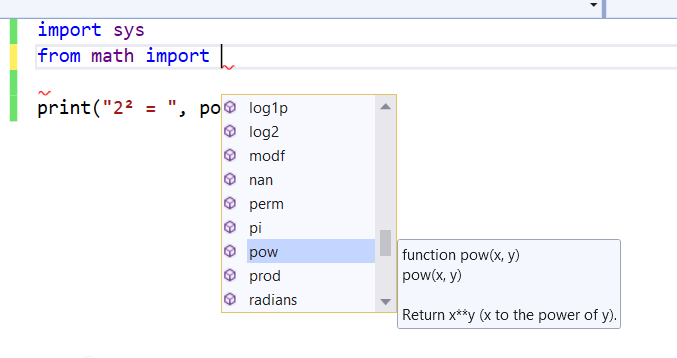 REPL stands for read–eval–print loop, which is a simple and interactive shell program to provide developers with an environment that takes inputs, executes them, and returns the results. Most programming languages support this feature.

As with many other languages that Visual Studio offers support, Python’s not different when it comes to interactive REPL.

To open it, go to the menu View > Other Windows > Python Interactive Windows (or press Alt + I) and now you have a direct window to test your Python code. Figure 9 demonstrates a quick example of use.

It also identifies multiline code statements, like when you’re defining a Python function and performs automatic indentation, as you can see in Figure 10. This way, you can test more complex code structures without a physical Python file.

You can also import 3rd-party packages directly within Visual Studio. For example, say you’d like to incorporate a few more complex mathematical formulas to your application via the NumPy library, which is used for scientific computing with Python.

To do this, right-click the Python Environments node within your Solution Explorer window, and select the option View All Python Environments. Then, with your current Python version selected, make sure that Packages (PyPI) is selected. Type the name of the package you desire in the available field, as shown in Figure 11. Click Enter. 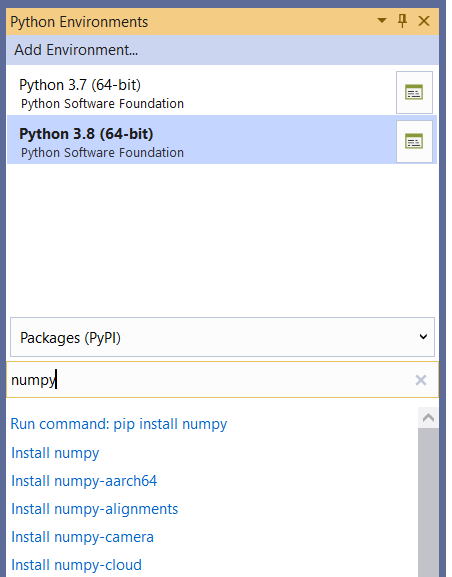 A green loading bar will appear while the package is installing. When it’s finished, you can check on the results alongside the Output window. When the installation is complete, go back to your code file and place the contents shown in Listing 1 there.

Listing 1. Making use of NumPy package.

The arange function returns evenly spaced values within a given interval. Values are generated within the half-open interval [start, stop]. The reshape function, in turn, gives a new shape to the array without modifying its values. Figure 12 shows the output of this program execution. 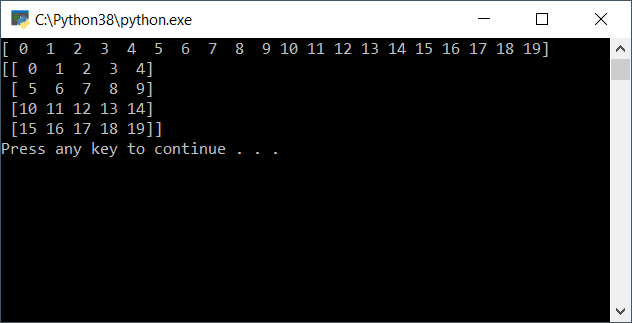 This example demonstrates how powerful it is to deal with project dependencies within Visual Studio as it is with other IDEs.

Building a web application with Django

Now’s time to move on to a more robust application. Until now, you’ve explored how Python works in a Visual Studio Console application, the main features, shortcuts, dependency management, etc. It’s time to build something that resembles something useful in daily life — a web application made with Django.

Django is a high-level Python Web framework that encourages rapid development and clean, pragmatic design. One of the favorite choices for Python developers in terms of web applications. You may have noticed in the step where you created the Python project template, Visual Studio prompts a bunch of options related to Python frameworks, such as Django and Flask-based projects.

Now to get back to the initial steps and create another application by selecting the menu New > Project. When the window opens, make sure to have Python as the default language selected.

You’ve got an option to create an empty web project for generic Python web projects. However, stick with Django since it saves a lot of time in terms of configurations. Figure 13 illustrates this step. 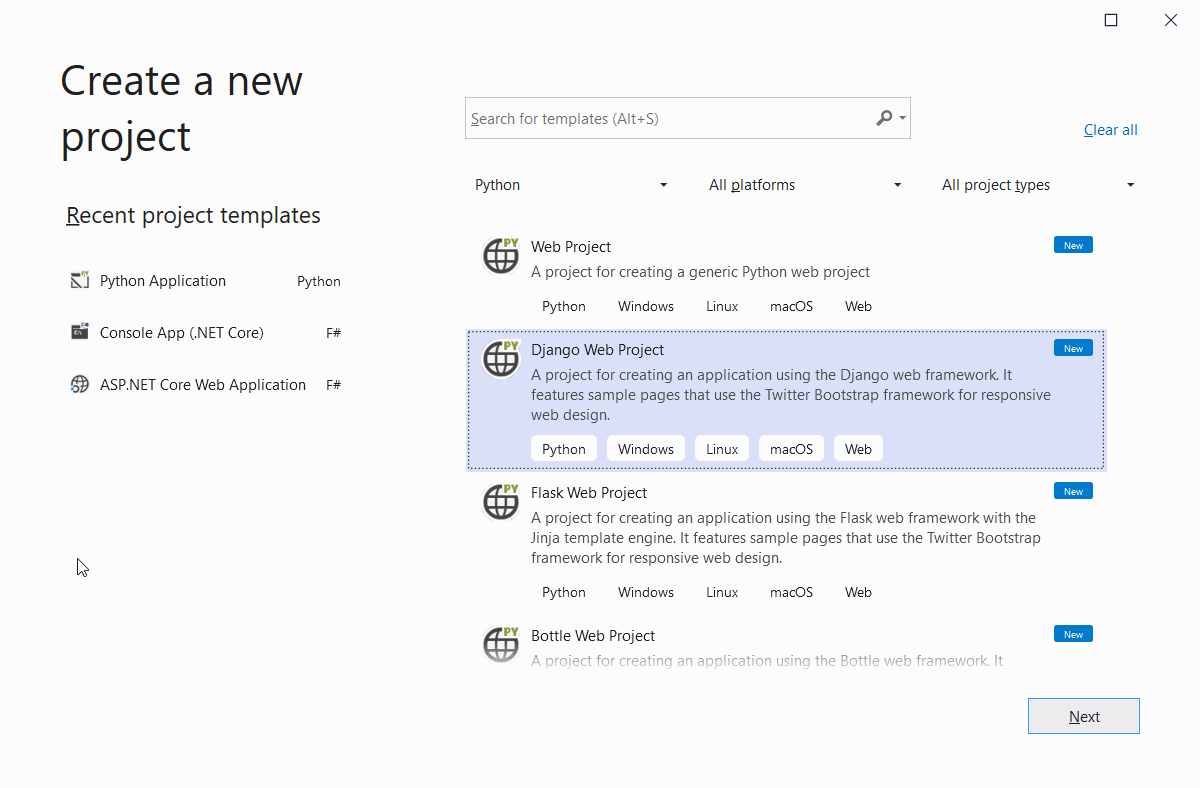 Click Next and, in the following screen, give the project and solution a name, select the project location, and hit the Create button. Once the project is created, make sure to take some time to analyze its initial structure (Figure 14). 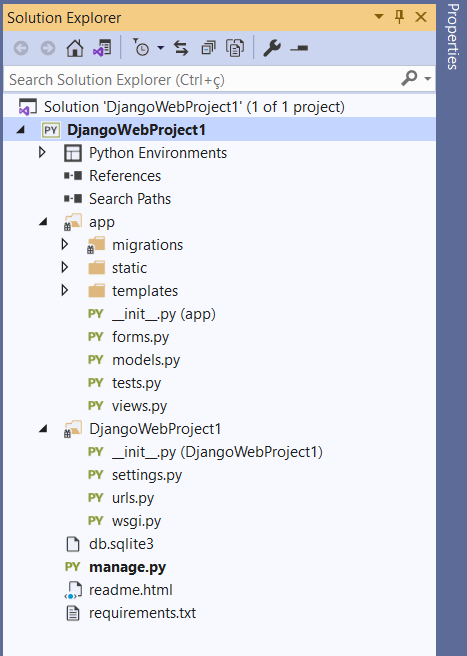 Projects in Django are composed of one or more inner Django applications, resembling a monolithic model. As you can see in the image above, each project is located right below the solution. You can have as many as you wish.

Setting Up a Virtual Env

Python works with virtual environments (venvs), which are self-contained directory trees with a Python installation for a specific version of the language. This structure helps to separate the global installed Python environment from the ones you’re using alongside your projects. They work as virtual workspaces. 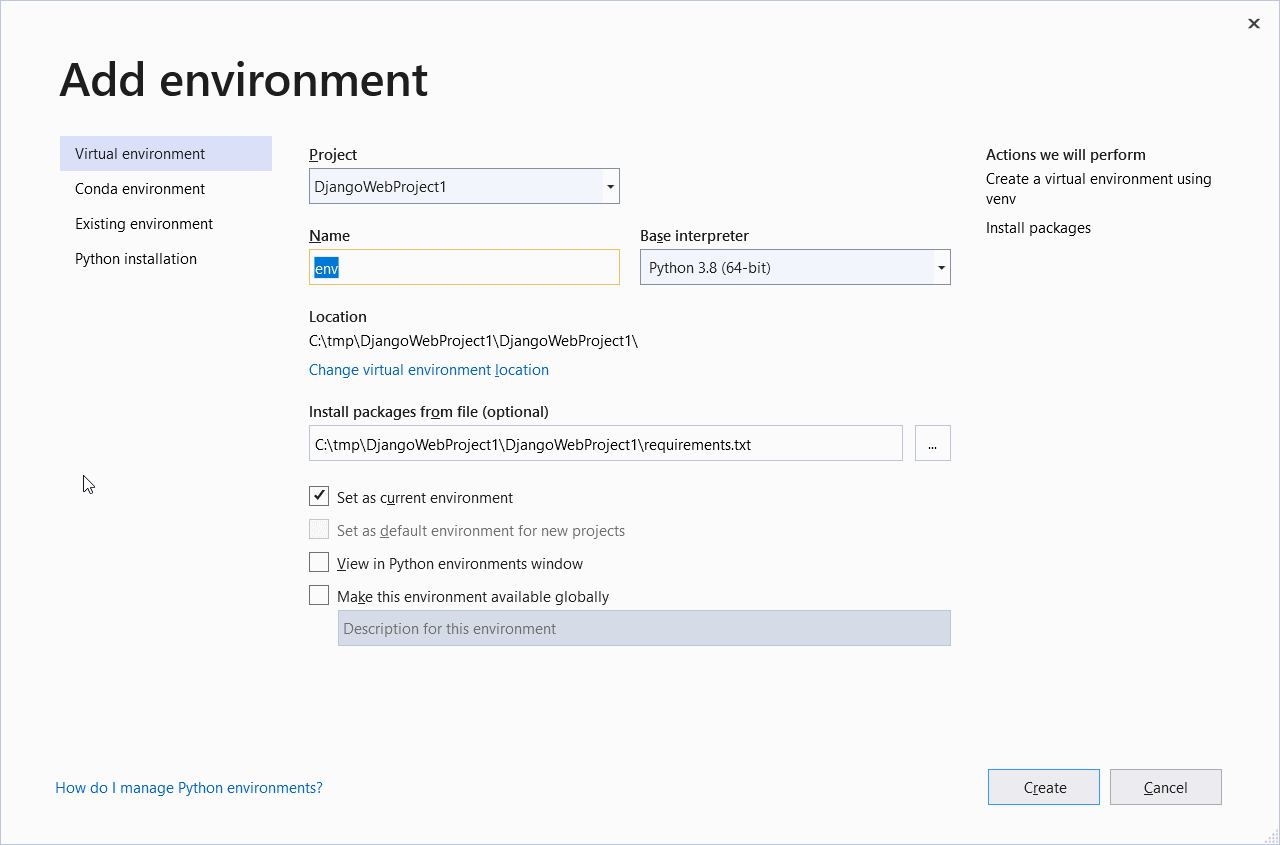 You can leave all the configs as they are and click the Create button. Just make sure to leave the Set as current environment checkbox checked. At the end of the process, your node will change to the following:

Great! You’re no longer using the default global environment. This way, all the Python packages and changes you perform will be restricted to this env, so your app becomes fully isolated and does not impact the others.

You can break down everything in the DjangoWebProject1 folder, the project structure, like this:

The Django application, which is located under the app folder, comes in a separate Python-based package because Django projects can have one or more Django apps. It will make use of the urls.py file you’ve just seen to route from the outer scope to the inner app’s scopes.

Among its main auto-generated folders and files, you can find:

Now you’re ready to run the project and see how it works in action. Just click the Web Server (Google Chrome) button available at the top of the IDE. This will open a Chrome window and display the page shown in Figure 17. 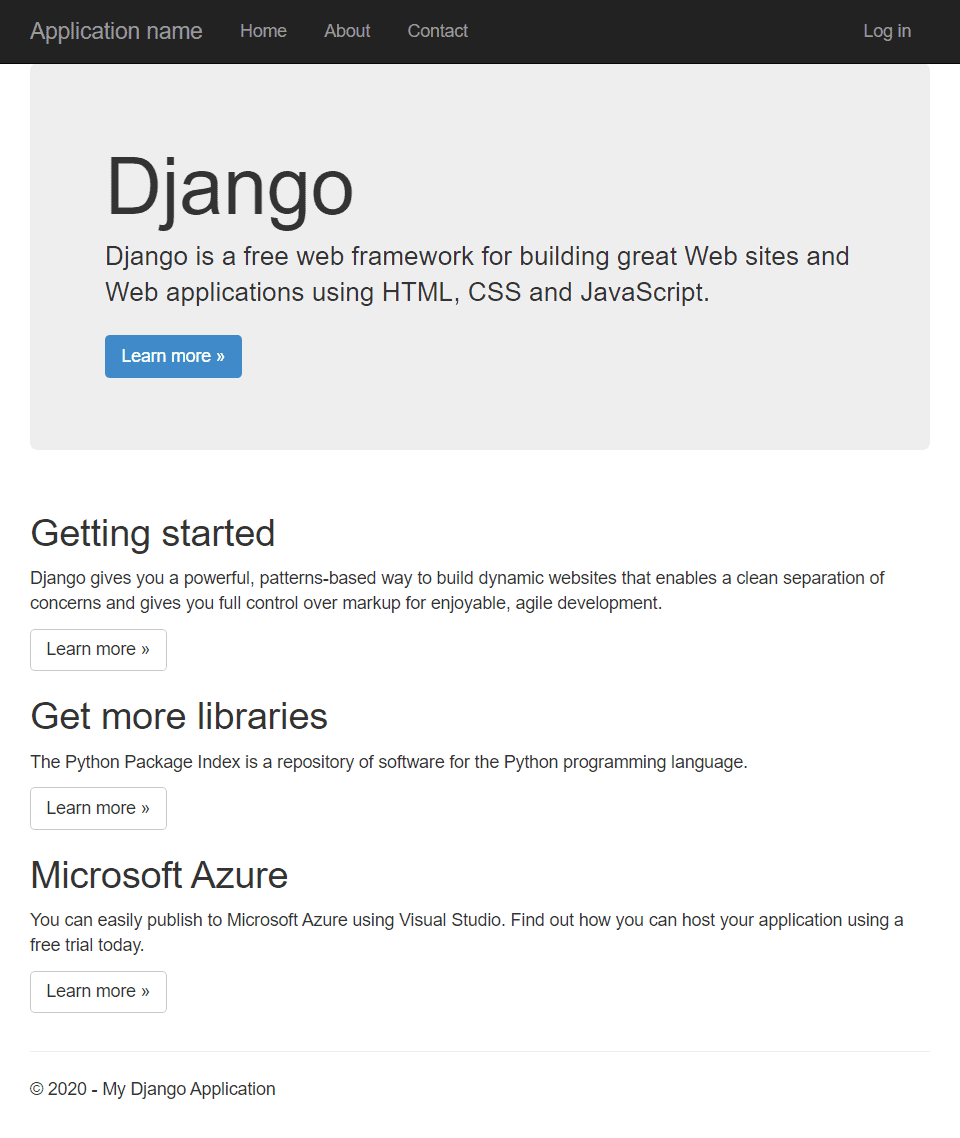 To try out a change, go to the views.py file and substitute the home function with the following:

Listing 2. Adding a random-generated number to the response.

You’re changing the title value and adding a randomly generated integer value to a variable called randomNumber. This value will go directly into your HTML page template, the index.html. Don’t forget to import the randint function at the beginning of the file:

Then, open the index.html template file and change the jumbotron div content for the following:

Figure 18. Changing some values to the index template

There’s a whole lot more to see regarding Python development within Visual Studio. This was just a brief introduction to the main concepts and steps you’d have to take to get things started.

I can’t stress enough the need of going through the Python and Django official documentation, to guide you every time you feel lost. Or even to start with the language + framework.

What about you? How was your experience using Python along with Visual Studio? Leave your thoughts in the comments section and let’s discuss it. Good studies!

0 1
You can find memory leaks in Python code with tracemalloc. In this article, Priyanka Nawalramka demonstrates how to use tracemalloc to find the leaks.… Read more
0 1