Partitioning Your Code Base Through .NET Assemblies and Visual Studio Projects

Should every Visual Studio project really be in its own assembly? And what does 'Copy Local=True' really mean? Patrick Smacchia is no stranger to large .NET projects, and is well placed to lay a few myths to rest, and gives some advice that promises up to a tenfold increase in speed of compilation.

This article is aimed at

The aim of this is to increase the speed of .NET developer tools, including VS and C#/VB.NET compilers, by up to an order of magnitude. This is done merely by rationalizing the development of a large code base. This will significantly increase productivity and decrease the maintenance cost of the .NET application .

This advice is gained from years of real-world consulting and development work and has proved to be effective in several settings and on many occasions..

Why create another .NET assembly?

The design of Visual Studio .NET (VS) has always encouraged the idea that there is  a one-to-one correspondence between assemblies and VS projects. It is easy to assume from using the Visual Studio IDE that  VS projects are components of your application; and that you can create projects at whim, since by default, VS proposes to take care of the management of project dependency.

Assemblies, .exe and .dll files, are physical units. They are units of deployment. By contrast, a component is better understood as logical unit of development and testing. A component is therefore a finer-grained concept than an assembly: An assembly will typically contain several components.

Today, most .NET development teams end up having hundreds, and possibly thousands, of VS projects.  The task of maintaining a one-to-one relationship between assembly and component will have these consequences

All these common .NET development problems are a consequence of the usage of a physical object, an assembly, to implement a logical concept, a component. So, if we shouldn’t automatically create a new assembly for each component, what are the good reasons to create an assembly?  What common practices don’t constitute good reasons to do so?

There are two different ways to merge the contents of several assemblies into a single one.

This doesn’t solve those problems that are due to there being too many VS projects, thereby causing  a significant slowdown of VS, and the compiler’s execution time.

Reducing the number of assemblies

Technically speaking, the task of merging the source code of several assemblies into one is a relatively light one that takes just a few hours. The tricky part is to define the proper new partition of code across assemblies. At that point you’ll certainly notice that there are groups of assemblies with a high cohesion. These, are certainly candidates to be merged together into a single assembly.

By looking at assemblies dependencies with a Dependency Structure Matrix (DSM) such as the one of NDepend, these groups of cohesive assemblies form obvious squared patterns around the matrix diagonal. Here is a DSM taken on more than 700 assemblies within a real-world application: 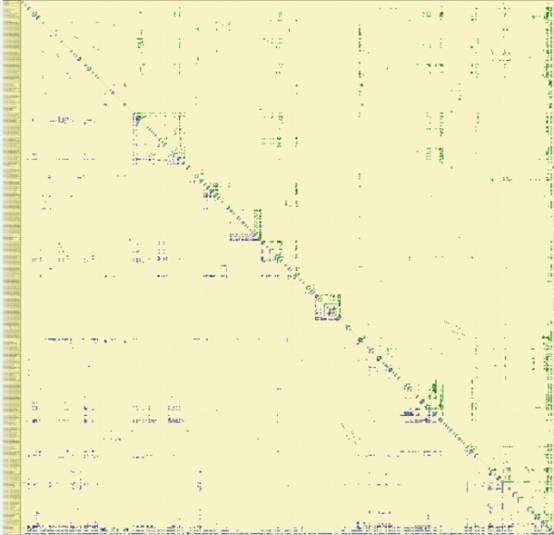 You can use a simple technique to reduce the compilation-time of most real-world VS solutions by up to an order of magnitude, especially when you have already merged several VS projects into a few.

By default, VS stores each VS project in its own directory. Typically VS suggests the folder hierarchy for a project, named here MyVSProject:

A VS solution typically has several VS projects and, by default, each VS project lives in its own directory hierarchy. At compilation time, each  project builds its assembly in its own bin\Debug or bin\Release directory. By default,  when a project A references a project B, the project B is compiled before A. However,  the assembly B is then duplicated in the bin\Debug or bin\Release directory of A. This duplication action is the consequence of the value ‘True’ having been set by default  for the option ‘Copy Local‘ of an assembly reference. Whereas it makes sense for a small solution, it will soon cause problems for larger applications 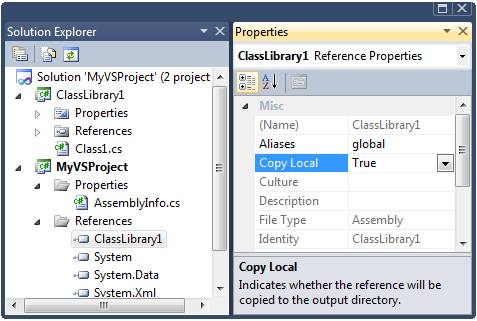 As the size and complexity of solutions increase, the practice of duplicating assembly at compilation time is extremely costly in terms of performance. In other words:

Imagine a VS solution with 50 projects. Imagine also that there is a core project used by the 49 others projects. At Rebuild-All time, the core assembly will be compiled first, and then duplicated 49 times. Not only this is a huge waste of disk, but also of time. Indeed, the C# and VB.NET compilers don’t seem to have any checksum and caching algorithm to pinpoint whether the metadata of an assembly has already been parsed. As a result, the core assembly has its metadata parsed 49 times, and this takes a lot of time, and can actually consume most of the compilation resources.

From now on, when adding a reference to a VS project, make sure first, to add an assembly reference, and second, make sure that Copy Local is set to False (which doesn’t seem to be always the case) 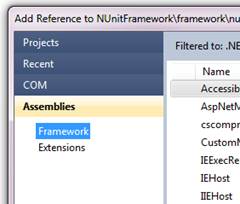 A slight drawback to referencing directly assemblies directly rather than their corresponding VS projects, is that it is now your responsibility to define the build-order of VS projects. This can be achieved through the Project Dependencies panel: 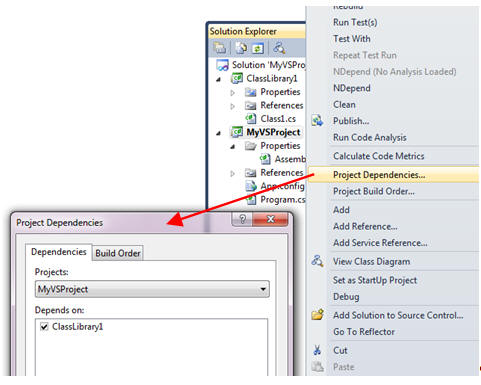 If you set ‘Copy Local = false’, VS will, unless you tell it otherwise, place each assembly alone in its own .\bin\Debug directory. Because of this, you will need to configure VS to place assemblies together in the same directory. To do so, for each VS project, go to VS > Project Properties > Build tab > Output path, and set the Ouput path to ..\bin\Debug for debug configuration, and ..\bin\Release for release configuration. 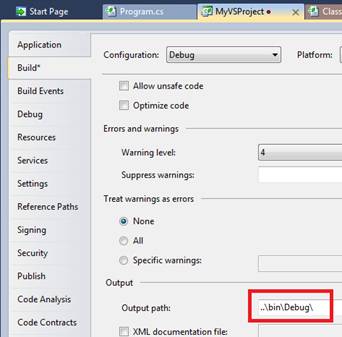 Now that all assemblies of the solution reside in the same directory, there is no duplication and VS works and compiles much faster. 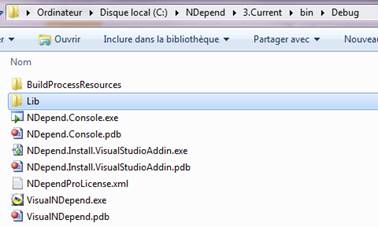 If you wish to nest libraries in a sub-lib directory, it is necessary tell the CLR how to locate, at run-time, library assemblies in the sub-directory .\lib. For that you can use the AppDomain.CurrentDomain.AssemblyResolve event, this way:

In this piece of code you will notice how we

Instead of relying on the AppDomain.CurrentDomain.AssemblyResolve event, it is also possible to use an executableAssembly.exe.config file for each executable. Each file will redirect the CLR probing for assemblies to the sub-directory .\Lib. To do so, just add a Application Configuration File for each executable assembly, and put the following content in it:

The solution involving the event AppDomain.CurrentDomain.AssemblyResolve is usually preferable because it avoids having to deploy the extra files in the redistributable.

To do so, we suggest that you use the Application Configuration File trick we’ve just described, to redirect CLR probing to sub-directories of the ..\bin directory. If you’ve put your NUnit assemblies (or equivalent) in a ..\bin\NUnit directory, the probing XML element of the Application Configuration File for each test assembly (that can be a library or an executable assembly) will look like.

The list of directories listed in the privatePath XML attribute can only be a sub-directory of the current directory. This is why the directory ..\bin that contains all application assemblies in sub-directory, is well suited to contain test assemblies.

When the code base reaches a particular size, the user is forced to spread the code across several VS solutions. This is because, even with few VS projects and a solid hardware, VS slows down significantly when hosting a VS solution with more than 50K LoC.

We recommend that you put all the VS solutions files in the same root directory, the one that contains the .\bin folder described above. If each VS solution’s files are stored in its own  hierarchy of folders, it quickly becomes a considerable task to find them.

It saves a great deal of time if you put a few .bat files in this root folder  that execute common build actions. This way, the developer is one-click away from:

Rebuilding a solution file with a .bat file is as simple as writing in the .bat file: