A .NET software component is a compiled set of classes that provide a programmable interface that is used by consumer applications for a service. As a component is no more than a logical grouping of classes, what then is the best way to define the boundaries of a component within the .NET framework? How should the classes inter-operate? Patrick Smacchia, the lead developer of NDepend, discusses the issues and comes up with a solution.

My aim is to assist a .NET development shop to rationalize the development of a large code base so as to let the developers become productive, and to reduce the cost of maintenance.

The advice I’ll give in this article comes from experience gained in years of real-world consulting and development in various development corporations. It has proved to be effective several times, in different circumstances.

In my article Partitioning code base through .NET assemblies and Visual Studio Projects we focused on assemblies, and the reasons why it is more convenient to have fewer and larger assemblies. I suggested how to organize the VS solutions and VS projects. We mentioned that a component is a finer-grained logical concept than a physical assembly. This implies that a large assembly is not a monolithic piece of code, but is likely to contain several components.

The .NET platform has no intrinsic means of defining a component inside an assembly. So what is a component? There are whole books that are dedicated to explaining what a component is but, to keep things simple and practical, we’ll list some definitions. A component can be:

For this article, we’ll use the concept of a component as being a well-defined aggregate of types, with a reasonable size, and with an acyclic graph of dependencies between components.

A component is well-defined if its boundaries are explicit. Only two .NET language constructs can be used to explicitly define component boundaries and contain a set of children types: Parent class and namespace.

We therefore prefer to use namespaces to define explicit component boundaries. Namespaces are also often used to organize public API presentation. This usage of namespace fits nicely with the concept of components as we’ve shown: Component organization often mirrors the set of features, but a component can also host some infrastructure classes.

We measure the size of a component by counting the lines of code. A logical Line of Code (Loc) represents a Sequence Point. A sequence point is the code excerpt highlighted in dark red in the VS code editor window, when creating a breakpoint. Most of .NET tools for developers, including VS and NDepend, measure Lines of Code through sequence points.

The size of a component must be reasonable, between 500 and 2000 LoC. Indeed, we suggested already that a component is a unit of learning and a unit of architecture. A component must never be too large to be reviewed and understood. An architecture that is made of such components becomes coarse, and leads to a monolithic code style and uncontrolled entropy.

If a larger component is required, then the component classes should be divided within sub-namespaces. Because namespaces can be represented through a hierarchy, we can use this as a convenient way to partition super-components into smaller components.

For example, the Dependency Structure Matrix (DSM) of NDepend is a complex feature that weighs around 5.000 LoC: Because of this, the DSM implementation resides in a namespace that contains seven sub-namespaces. The sub-namespaces correspond to sub-features of the DSM such as Header handling and Cells Computation. The screenshot below shows this organization through the DSM itself and through a graph of dependencies:

We can see that the graph is acyclic and that the parent namespace is using all child namespaces. This illustrates a recurring pattern where:

Structuring code with Mediator, Feature and Base components

A program code base is likely to be composed of large components, each one of which will probably contain sub-components that are only needed for their own private implementations. This idea is illustrated by the DSM below that shows the architecture of the NDepend UI code (> 50K LoC). There are many large components in the list those who namespace name ends up with .* to signify that they contains sub-components. 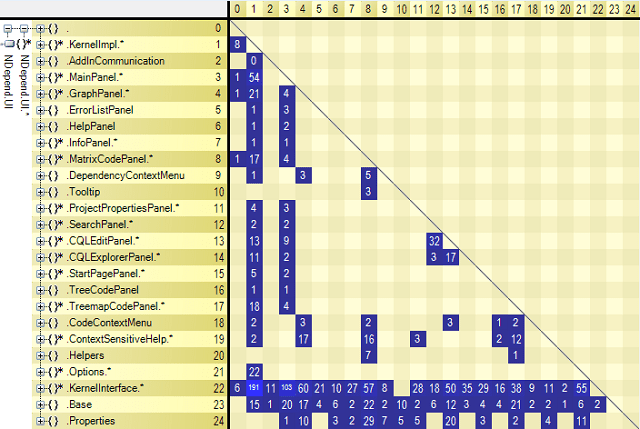 The two vertical lines on KernelImpl.*and MainPanel.* namespaces (columns 1 and 3) indicate that these two components act as mediators between lower level components. Hence the other columns are pretty empty, meaning that components that represent features (Matrix, Graph, CQL …) are independent from each other.

The three rows 22, 23 and 24, are almost full. They represent base components that support all higher level components. Obviously this high-level architecture and the finer-grained architecture of the Matrix components are pretty similar. The same pattern is applied at two different scales. In both cases there are:

Main benefits of classifying components between feature, mediator and base are that:

Acyclic graph of dependencies between components

By looking back to the DSM representing the NDepend.UI structure, we can see that the upper triangle above the matrix’s diagonal is empty. Each component can be used by components above it, and can use components below it. Hence the structure is perfectly layered. It is important to remember that:

The graph of dependencies between components is acyclic if, and only if, its DSM representation has its upper triangle empty.

Since components are layered, each component can have a level index. Hence, we say that when an architecture has no dependency cycles, it is levelized. We have already tried to explain that a levelized architecture is essential because:

‘If the graph of dependencies between components contains a cycle, components involved in the cycle cannot be developed and tested independently. Because of this, the cycle of components represents a super-component, with higher entropy than the sum of the entropies of its contained components.’

Every developer has the instinct to lean toward an acyclic structure. This natural tendency explains the popularity of Visual Studio (VS) solutions with dozens of small VS projects. VS detects, and prevents, dependency cycles between VS projects;therefore developers see in the VS project the ideal device with which to implement the idea of levelized component. Unfortunately, doing so is far from ideal and we explain in the article Partitioning code base through .NET assemblies and Visual Studio Projects all the real-world problems of this approach.

The tool NDepend offers a simple way of checking for dependency cycles between namespaces of an assembly. The following rule, written with Code Query Language (CQL), is all what one needs to be advised of a broken architecture.

If an assembly is matched, just right-click the assembly in the list of match and click :View internal dependency cycles on matrix : 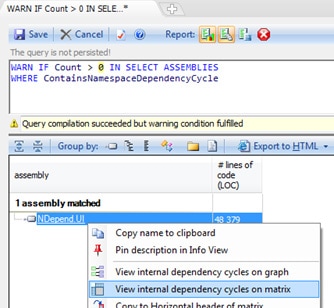 The matrix will make the dependency cycle obvious with a red-square. Here, for the requirements of this article, we contrived it so that the two namepaces GraphPanel and KernelInterface are mutually dependent. This provokes five components to be entangled in a dependency cycle, hence the red square on the DSM that encompasses these five namespaces: 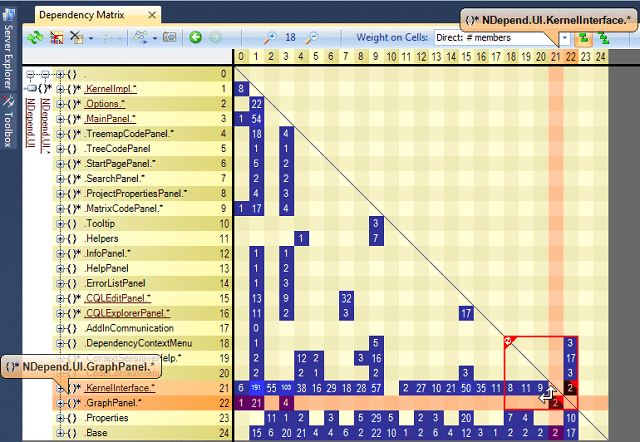 Having a levelized structure between namespaces is enough to keep the architecture clean and maintainable. We’ve often noticed in code that the code structure naturally tends towards being levelized. This is because of the developers instinct for the notion of layers, that we already mentioned.

In the DSM above, we see the namespace Base at the lower level in the architecture. For most developer, it would seem unnatural and awkward to create a dependency from Base to any other component. Base’s concepts are not supposed to use anything, they are here to be used from other components.

Often, the code structure is naturally close to levelized but not thoroughly levelized. Tooling is needed to prevent these few wrong dependencies (like from Base to something else) that appears with time. Usually there are not so many of these dependencies to fix. Because of this, the rule more than the exception is that often ‘Levelizing’ an existing code base is a cheap process that can be achieved in a few days of work.

With evolutionary design, you expect the design to evolve slowly over the course of the programming exercise. There’s no design at the beginning. You begin by coding a small amount of functionality, adding more functionality, and letting the design shift and shape.

With levelized evolutionary design, good design is implicitly and continuously maintained. There are no questions about what to do to implement a new requirement. When planning new code to implement a requirement that is unpredicted, one just has to consider its fan-in and fan-out (who will use this new code and who this new code will use). From this information and from the need to preserve levelization, one can infer the level and the right location where this new code will fit well. Sometime the need to introduce abstractions through a pattern like injection of code or inversion of dependency will arise, but only to preserve levelization, not because it seems cool to do so or the new fashion pattern book advises it. And releases after releases, iterations after iterations, the design will evolve seamlessly toward something continuously flawless and unpredictable. Like in traditional building architecture, the structure won’t collapse.