ASP.NET v4 is released with Visual studio 2010. Web developers are presented with a bewildering range of new features and so Ludmal De Silva has described what he considers to be the most important new features in ASP.NET V4

The focus of Microsoft’s latest ASP.NET 4has mainly been on improving the performance and Search-engine Optimization (SEO). In this article, I’ll be taking a look at what I think are the most important new features in ASP.NET 4.

I’ll describe the details of each of these features in the following sections.

Output caching, or Page-Level Caching, caches the entire rendered markup of an ASP.NET web page for a specific time-period. This has always been one of the essential features for ASP.NET that is used extensively to increase application performance. However there have been some limitations on the feasible extent of caching, because cached content always had to be stored in-memory.

To create a custom output-cache provider, a class which derived from System.Web.Caching.OutputCacheProvider has to be created in ASP.NET 4.0. There are four public methods which you have to override in order to provide your own implementation for add, remove, retrieve and update functionality. Also, the output-cache provider has to be registered in the web.config file as shown in the following screen capture. 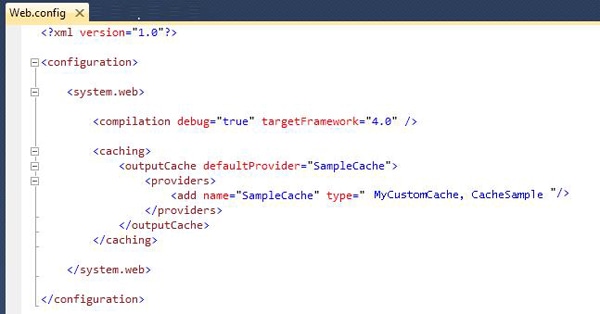 Moreover, developers can also dynamically configure which output-cache Provider is used. For example you might want to cache the frequently access pages in the memory for faster access and less frequent pages on disk. By overriding the GetOutputCacheProviderName() method you can configure which output cache provider to use for different requests. These additions to the output-cache can enable developers to write extensible and more efficient cache mechanisms to their web application and thereby improve its responsiveness.

The ASP.NET session state is a mechanism to maintain session-specific data through subsequent requests. In some instances, you may wish to store your session state data in a session-state server or in Microsoft SQL server. However, these two options require you to store data out of the web application’s worker process. To send across to the relevant sources, (State server or Microsoft SQL Server), session-state data has to be serialized. This can take a significant time if the size of the data to be serialized grows significantly. This will increase the latency of the application.

This latency can be reduced if the size of the data is lessened by compression. ASP.NET 4.0 introduces a new mechanism to compress your session state data for both Session-state server and Microsoft SQL server.  Compression can be enabled by setting the compressionEnable to true in the web.config file. In this example, the session-state data will be serialized/desterilized using System.IO.Compression.GZipStream.

With this compression feature, developers can often reduce the time it takes for a web application to respond by reducing the size of session data.

In ASP.NET 4.0, each web control will include a ViewStateMode property which lets developers disable view-state by default, and enable it just for the controls for which a persistence of state is required. ViewStateMode has the following three values;

By setting these values in page controls accordingly, a significant performance improvement can be gained in response-time.

To increase the relevance of pages in searches, developers should  include relevant “keyword” and “description” meta tags in the html <head> section.     Unfortunately, it takes some time to add these tags for each and every page, and the alternative of adding these tags programmatically was difficult.

But with ASP.NET 4.0, there are two new properties in the code behind file;

This will enable developers to easily and programmatically add the relevant keywords and description.

This will even be useful for Master pages-where you only have to add these properties in the master page. In addition to “keywords” and “description” settings in the code behind, developers can also set these values within the @Page directive.

ASP.NET 4.0 has improved SEO (Search-engine Optimization) facilities. Typically developers use Response.Redirect(string url) to handle requests for old URLs. However, this leads to an extra round trip to access the old URLs and so will negatively affect your page-ranking  in search-engines.

ASP.NET 4.0 introduces a new Response.RedirectPermanent(string url) helper method to be used as HTTP 301 (Moved permanently) to handle requests. This will enable search-engines to index URLs and content efficiently and thus improve the page rankings.

Routing will let developers serve meaningful URLs to users and map them with the actual physical files. This URL-rewriting mechanism enables developers to write high ranking, search-engine optimized web applications. For example, URL for a page which displays an actual product might look like the following;

By using routing the URL will look like the following

In this way, the URLs will be more easily remembered by users.  It will also significantly improve the search-engine page rankings of the web site.

In previous versions of ASP.NET,  URLs were limited to 260 characters in length. But in ASP.NET 4.0 developers have the option of increasing or decreasing  the length of URLs by using  the new maxRequestPathLength and maxQueryStringLength. I’ll illustrate this in an example.

In previous versions of ASP.NET you were limited to a fixed set of characters but in v4, developers can also validate the invalid characters by specifying values in the requestPathInvalidChars attribute.

Html Encode method encodes a particular string to be displayed in a browser. It is important to encode strings prior it’s rendering in the page, mainly to avoid cross-site script injection (XSS) and HTML injection attacks. However, developers so often forget to call the encode function.

In previous .NET versions, Server.HtmlEncode() or HttpUtility.Encode() methods has been used for string encoding as shown in the following example.

ASP.NET 4.0 introduced new code expression syntax for encoding a particular string.  While the syntax will render the output it also encodes the relevant string as shown below. Note “:” character after opening tag (“<%”).

The new encoding syntax provides an easy and concise way of encoding a particular string.

Client ID property can be set in three different ways;

New ClientIDRowSuffix property on databound controls also gives a similar functionality when rendering an each data item. Once you set the relevant databound property to ClientIDRowSuffix, the value will be added as a suffix to individual row elements.

After the control renders the “State” value will be added as a suffix to each data row element. 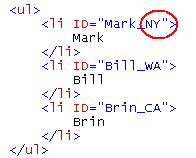 Over the past few years web.config file has grown significantly as ASP.NET has used it for more and more features such as routing, Ajax, IIS 7 and version compatibility. This has made it trickier to maintain even with the Visual Studio environment.

With ASP.NET 4, most of the major elements have been moved to the machine.config file. This has enabled developers to maintain a cleaner, less cluttered, web.config file. The new web.config file is either empty, or includes just the .NET framework version details as shown in the following example.

Most application requires initial data load or caching operations to be done before serving the client requests. Typical this happens only when the first user request a page. However, often developers and web administrators write fake requests to keep the application alive to increase the response time. To overcome this issue, ASP.NET 4 introduce new Auto-Start feature. Auto-start feature available with IIS 7.5 and it initialize the ASP.NET application to accept requests.

As soon you save the applicationHost.config file the worker process will start and initialize the required application operations before the first user has been served.

There are some significant improvements in the Ajax Library in the ASP.NET 4. of which the most important seem to be…

Ludmal is a software engineer, technical author and trainer with over 9 years experience in the software development industry. He is a MCPD and MCTS on enterprise application development. You can read his blog at http://www.ludmal.net and e-mail him at ludmal@gmail.com.