SQL Server Machine Learning allows you to run R and Python scripts from SQL Server. When SQL Server 2019 was released, Microsoft enhanced the security for this functionality, but it caused some existing code writing to the file system to to break. In this article, Dennes Torres explains the security enhancement and describes three ways to work with it.

I have a confession to make. Why, in my last article about shortest_path in SQL Server 2019, have I used Gephi in order to illustrate the relationships, instead of using a script in R for the same purpose and demonstrate Machine Learning Services as well?

This is the original R script I had planned to use:

The purpose of the script was only to create an image file with the relationships stored in graph tables, but in SQL Server 2019, it results in an access denied message.

If you would like to reproduce this demonstration, you can use this script file to create the database in a SQL Server 2017. You must also install the R packages needed by the script. There are many ways to do it. My favourite is this:

During PASS Summit, I was able to ask questions to the Microsoft employees in the Data Clinic, and they explained the differences between the two versions. The explanation hasn’t solved all the problems, but I was able to find a solution and create a workaround for this script.

While researching the workaround, I saw many examples of R scripts manipulating files and all these examples may fail in SQL Server 2019. Highlighting this problem, solution, and workaround in this article will be important to everyone using SQL Server Machine Learning and planning to migrate to SQL Server 2019.

The processes have access to the machine resources, limited by the permissions given to the SQLRUserGroup. Since SQL Server 2017 creates many users, you shouldn’t grant permissions directly to the users, only to the group.

In order to be able to manipulate files in the file system, you only need to give the correct permissions to the group SQLRUserGroup. The image below shows the group and users for SQL Server 2017 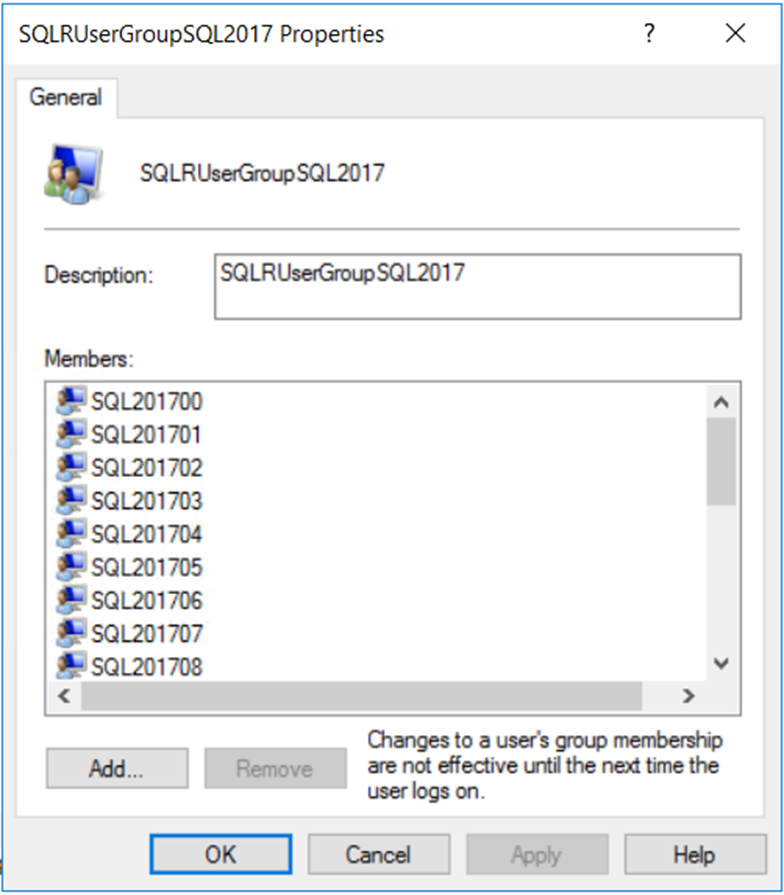 While the 2017 version, the SQLRUserGroup, had many users; in the 2019 version, it has only one, the Launchpad service account. The image below shows the group for SQL Server 2019. 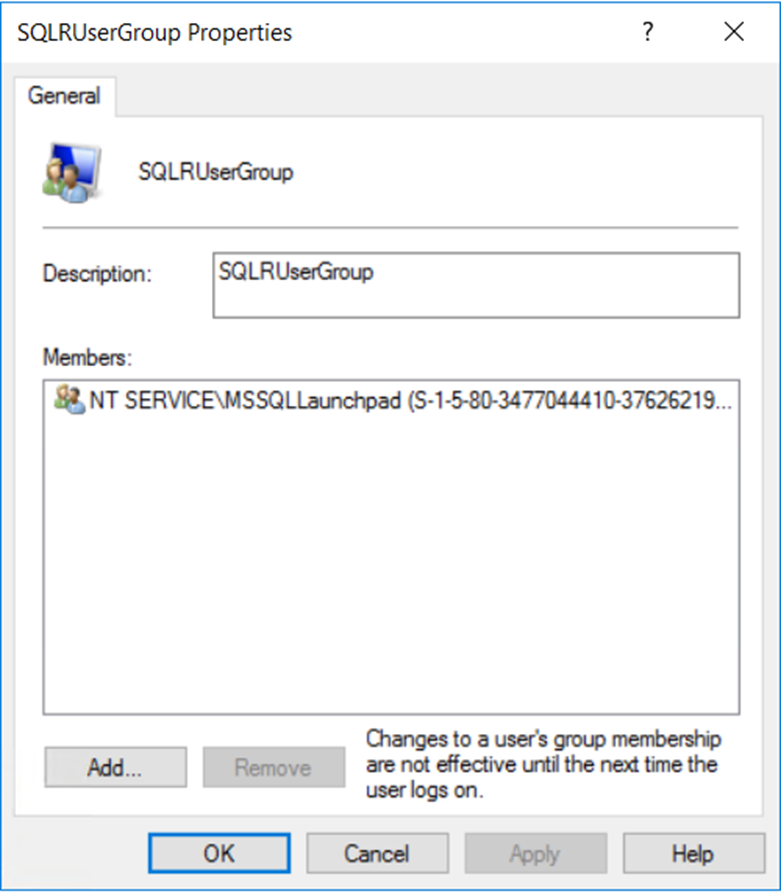 Nowadays, when talking about containers immediately, we think about Docker, but not in this case. The app containers I’m mentioning here are a sandbox set of APIs introduced in Windows 8. These allow any application to create app containers and start an execution inside an app container.

The app containers work as isolated virtual machines (but much more lightweight, of course). This means that you can’t access the file system of the host (your SQL Server), neither for reading or to save files. You save any files inside the app container, and they are destroyed after the app container is released. In fact, the container is redirected to save files in a temporary folder inside the host hard drive. This increases the security, no doubt about that, but any script dealing with the file system may need changes to work in SQL Server 2019.

You can learn more about app containers with these two links:

The image below the script shows the result in SQL Server 2019. 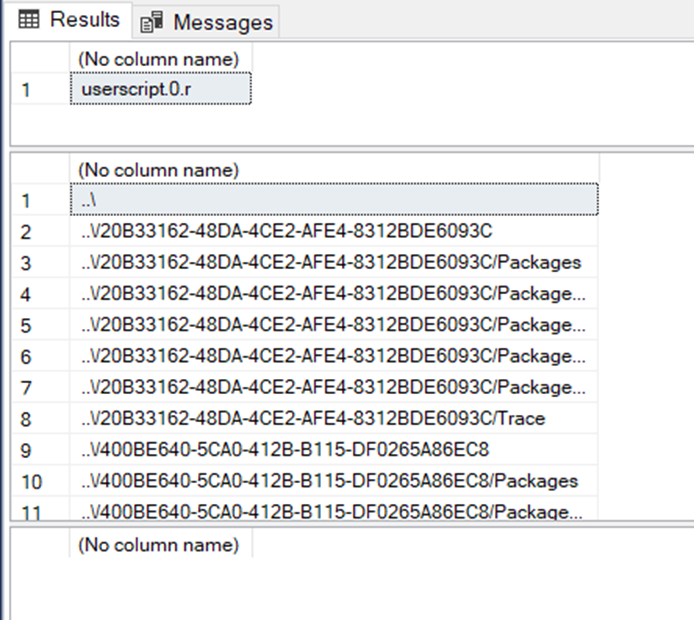 You can define file system permissions directly for the SIDs. The problem is: How to identify the SID’s of the app containers since they are not listed as user or groups.

You can test both solutions using a straightforward script. First, create a folder called C:\testFolder and copy some files, any files, to the folder. Try to list the files in this folder using the script below.

The All Application Container object has a fixed SID in the local directory, which is S-1-15-2-1 . You can use the application icacls to grant permission 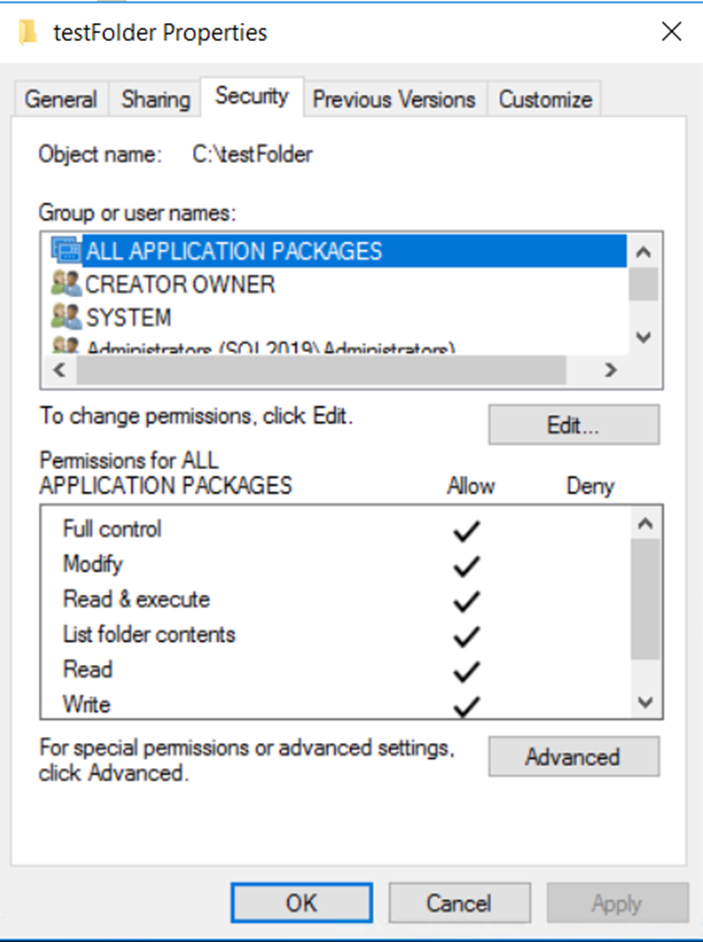 If you look at the firewall rules, you can see that the app containers are blocked. 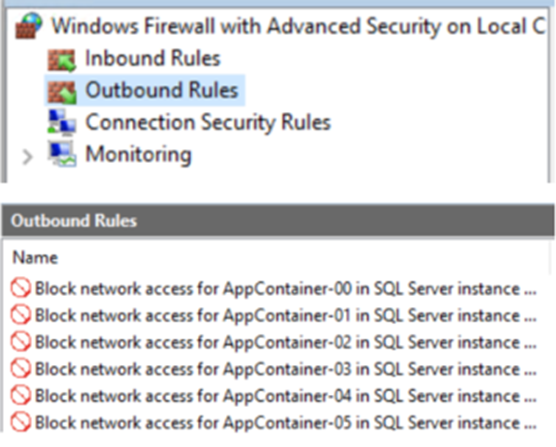 The firewall UI doesn’t provide the SIDs, however. You need to dig deeper using PowerShell to retrieve the SIDs from the firewall rules.

The complete PowerShell command line is this:

Having discovered the SIDs, you need to set the permission to the folder. The instruction will look like the one below for each SID.

You could copy and paste all the sids returned to create a batch file to set the permissions, but PowerShell can do all of this you as well. The following script prompts you for a file path, the one where you want Machine Learning to have access, and sets the permissions:

The script is using COM objects System.Security.Principal.SecurityIdentifier and System.Security.AccessControl.FileSystemAccessRule in order to set the access rule on the folder.

After running the script, take a look at the security properties of the folder, and the R script should now work from SQL Server 2019. 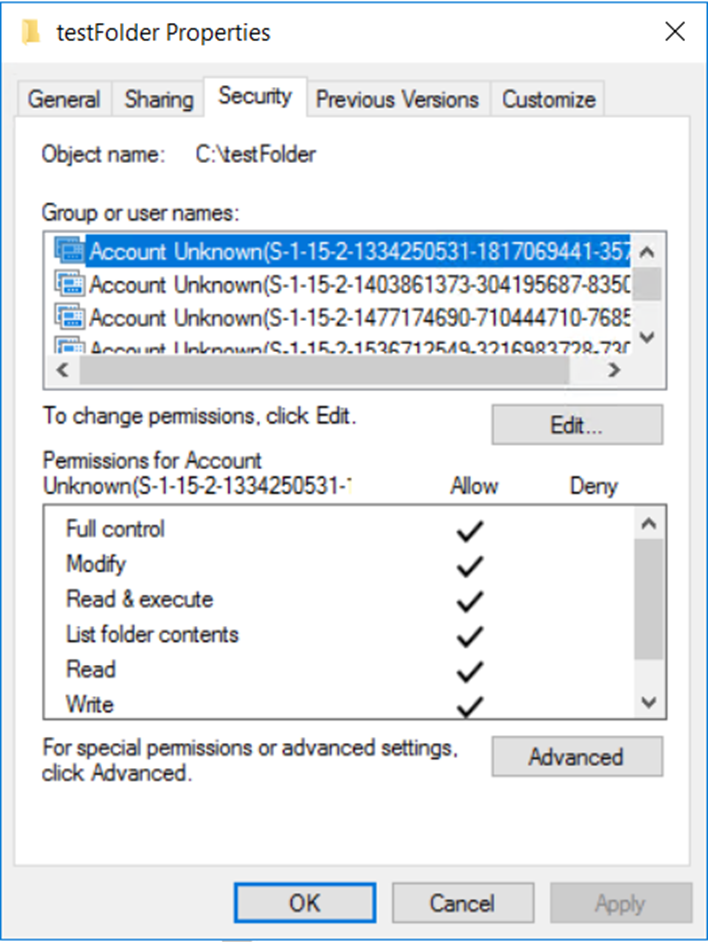 Although I have identified two solutions, it’s interesting to notice Microsoft is moving SQL Server Machine Learning towards a more secure environment, avoiding network and file system access. Considering this, you may like to use an alternative solution.

There are some options, all based on returning the image as an output parameter to SQL Server. Here is one of the options.

A filetable can map a disk folder as a table in SQL Server. This a very good solution when you need to deal with files. The script in R will see the table as a regular table. While reading or inserting into the table, the script will be reading and inserting from/to the disk.

It’s a very good solution for a permanent environment, however, it has some problems:

The Filetable technology was created in SQL Server 2016, based on the filestream technology which was built on the previous version.

A filetable solution needs some administrative care; for this reason, this solution can only be used after enabling it on a server configuration level. Follow these steps to enable this solution: 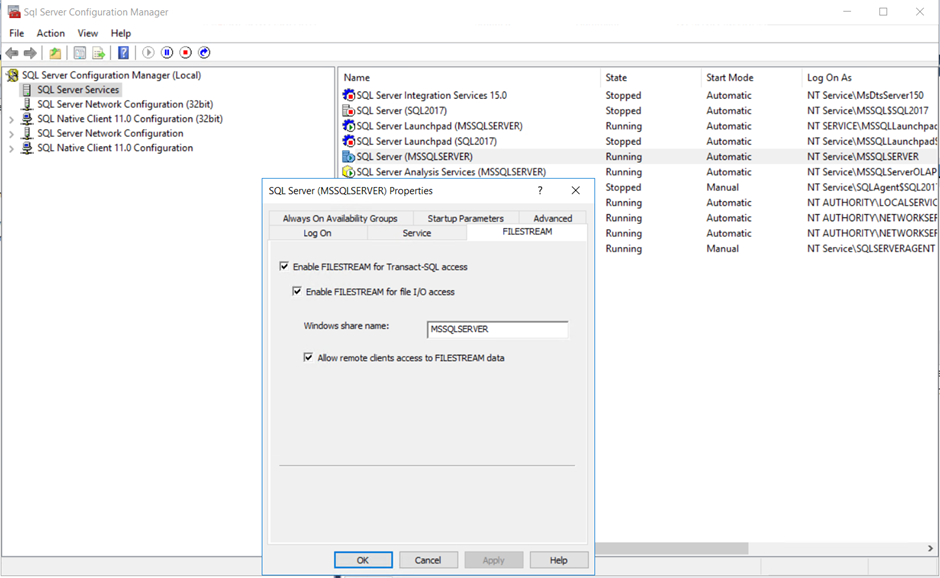 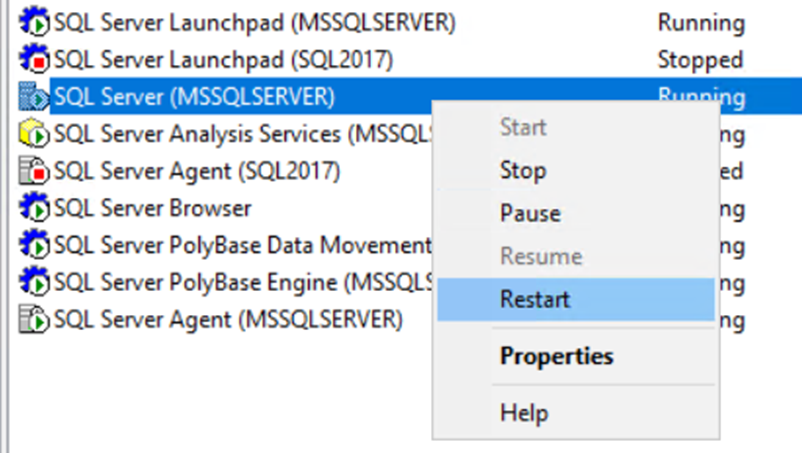 Preparing the Database to Support Filetable

In order to support filetable, you need to make some changes to the database. You need to create a filegroup to contain the filestream data, configure a special file, which will point to a folder and change some database settings.

Here is the T-SQL to execute for the database. Be sure to delete the c:\R folder before running this code: 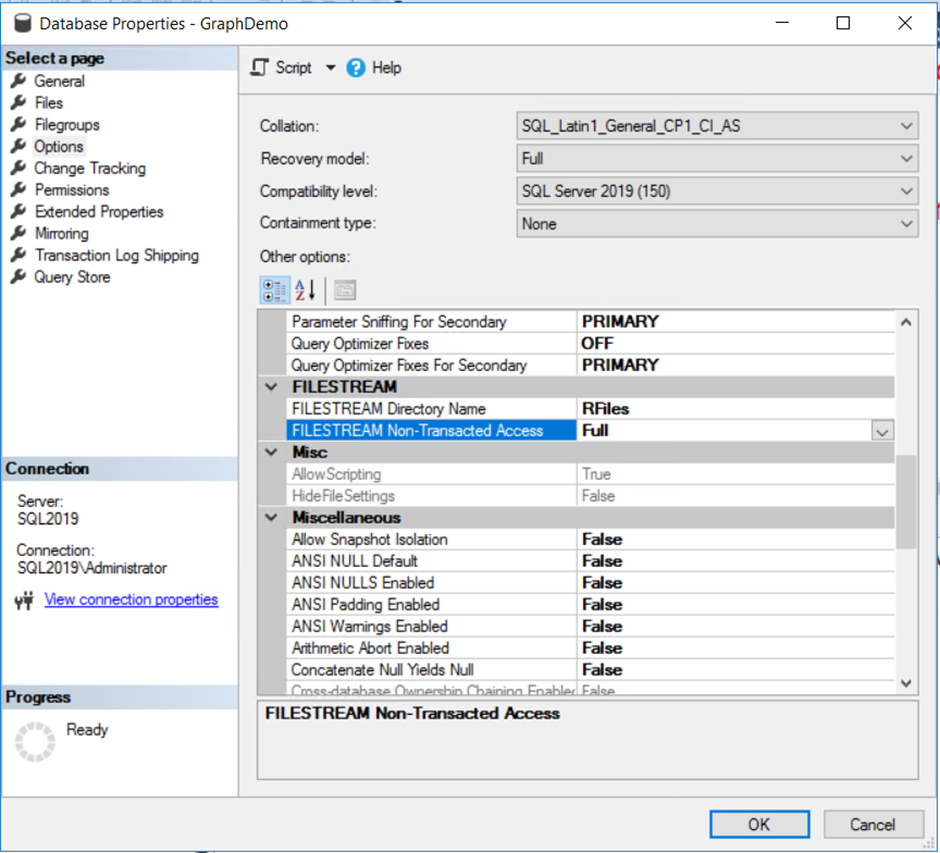 The filetable you created, Images, is linked to a folder. Which folder? If you check the path c:\R, which was used to configure the database file, you will find some files and folders, but it’s not easy to understand them. So, what’s missing?

This time the table has one row, exactly the row for the new file you copied. The filetable is linked with the folder. So, if you insert a record inside the filetable, the record will be a file available in the folder, in this way you can save to disk the image generated by the R script

After preparing the filetable environment, the new script will be this one:

The script is very similar to the initial one; however, this time, it results in an output variable with the image.

Here are the differences between this script and the original:

The result of the execution of the script above will be a new file in the folder, you can check by accessing \\localhost\MSSQLSERVER\RFILES\Images

During my research on the web, I saw many examples of R scripts dealing with the file system. These scripts which are running nowadays in SQL Server 2017 will break in SQL Server 2019 unless one of the changes explained in this article is applied.

You can choose to fix the file system permission or start to avoid direct file system access from the R script. I believe Microsoft will provide a fix for this problem soon, what probably will be an easier way to give permissions to the app container SIDs