One of the more important tasks in the process of rolling out incremental developments to a multi-server production system is to double-check that all of the planned modifications, and nothing else, have been deployed. An Oracle expert, Bruce Armstrong, comes across SQL Compare for Oracle, and sees if it helps with this time-consuming task.

A few years ago, I was a contractor at a large aerospace company where I often had to migrate Oracle database modifications between instances (e.g. development to test, test to production, and so on). Promoting code to production for a major release was always done on weekends to avoid extended downtime for the users. My job was to ensure that all the modifications were correctly promoted to production, as this clearly determined the success or failure of the rollout of the new database version. However, the application was large, and modifications were often extensive, so it often meant spending more of my weekend in the office than I would have liked.

Today I’m a development manager, responsible for an application that is deployed to numerous customers at numerous locations. The DBAs within our development shop are responsible for the promotion of code to the testing environment, and eventually packaging it up to send to the customer for production deployment by the DBAs in the field, who are responsible for that process. Even though I no longer have direct responsibility for code promotions, my group is the one that ends up with the bug reports (either internally from our QA department, or externally from our customers) if some code modification didn’t get applied correctly to a database.

In all of these cases, I badly needed an easy-to-use, accurate, and reasonably-priced schema comparison tool, but I just couldn’t find one. I’ve tried a number of schema comparison tools over the years and, in general, I would have told you that you could have filled any two of those three requirements. You could have easy-to-use and reasonably-priced, but with results that still left you doing a lot of manual effort. Or you could have easy-to-use, with accurate results, but you’d have to be willing to pay a significant price for it.

In this article, I’ll review a few of the schema compare tools I’d tried before, and highlight why I thought they fell short of what was needed, and then review Red Gate’s Schema Compare for Oracle, and explain why I think it gets the closest yet to offering all three requirements.

Of the tools I’ve tried over the years, some were essentially free, such as the Schema Compare Tool for Oracle from www.codeproject.com and the schema compare provided in Oracle’s own SQL Developer. Others were built-in as a feature of general purpose third party PL/SQL development tools such as PL/SQL Developer, and some were high-end special purpose tools like CAST Release Builder.

Some of these tools (particularly the free ones) will report that there are differences in objects, but provide little or no details about what those differences actually are. It doesn’t help me much to report that there are 3 lines of code which are different between two packages without showing me what those differences are. In many cases, the differences may be of no consequence for the purpose of the comparison (e.g., the case of an object name or the current value of a sequence). Which leads me to my next point: these tools also don’t provide any capability to indicate beforehand what types of differences I might want to ignore, or the ability to compare the code differences side by side so that I can evaluate them. The result of such a schema compare is often a lot of extra manual effort, attempting to weed out the significant differences from the trivial ones.

Admittedly, the tools that are reasonably priced often do display the code side by side, with differences highlighted once they have been detected. However, without the option to indicate in advance what types of differences are inconsequential, the end result can still be a great deal of manual effort comparing objects, only to find that the majority of the differences are of no interest. This can be particularly tedious if the code difference display is modal, requiring a dialog to be opened and then closed again as each different object is reviewed.

Naturally, the high end products don’t have these problems, but their cost is often out of reach for all but the Fortune 1000.

Red Gate, if you don’t know already, provides the market-leading Schema Comparison tool for SQL Server (as well as a number of other SQL Server tools) and they’re also responsible for the ongoing development of .NET Reflector. Schema Compare for Oracle is their first foray into providing tools to support the Oracle database. 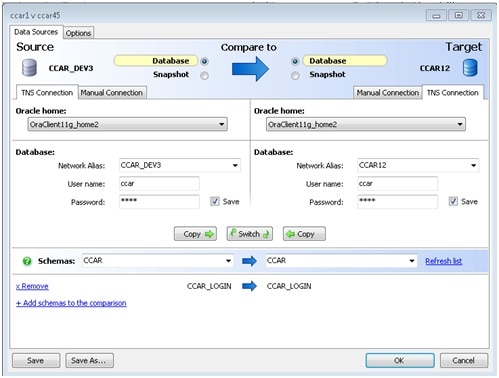 When you first launch Schema Compare for Oracle, you are presented with the dialog you use to define your ‘project’ (see Figure 1) – including which two databases you’ll be comparing. Note that you can create a ‘snapshot’ of a database and then use that instead of a live connection for one or both databases. This allows you to prepare a snapshot at one location, and send it to another location so that you don’t have to connect to both databases at the same time to do the comparison. For example, you might have a reference production database in your development shop, from which you can send out snapshots to remote locations, where the field DBAs can do the comparison locally to ensure their databases are consistent with the reference. Note that you can also select which schemas you want to include in the comparison, allowing you to compare more than one schema in the same project.

The second tab of the project creation dialog (Figure 2) is one of the key features that sets Schema Compare for Oracle apart from other tools. The ‘Ignore options’ gives you a great deal of fine tuning capability over what kinds of differences you want to exclude from the initial results – no more hunting though hundreds of trivial differences in objects looking for significant ones. 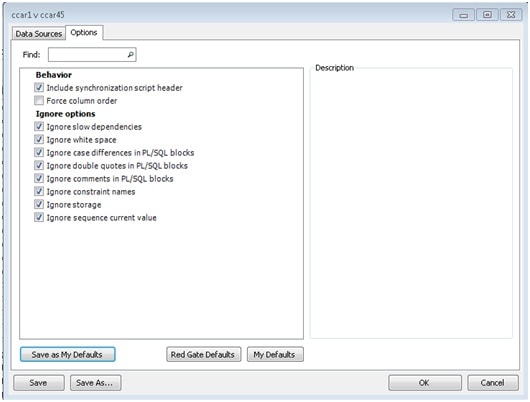 Once you hit the OK button on the project definition dialog, Schema Compare begins the first stage of its work. A progress window is displayed, letting you know what the tool is doing and allowing you to cancel the action if necessary (e.g. you realized that you specified one of the project options incorrectly).

When the analysis is complete, the main window of the tool shows the results; the top half of the window shows a list of the database objects, broken out into four categories:

Each of those categories can be expanded to show the objects included. Clicking on a particular object in the list displays the source from each database in the bottom half of the window, with the differences between the objects (if they exist) highlighted. The ‘Prior‘/’Next‘ buttons on the source code view portion of the window allow you to navigate quickly to the next difference between the objects, and those buttons are quite handy if you have a really large object with only a few differences. 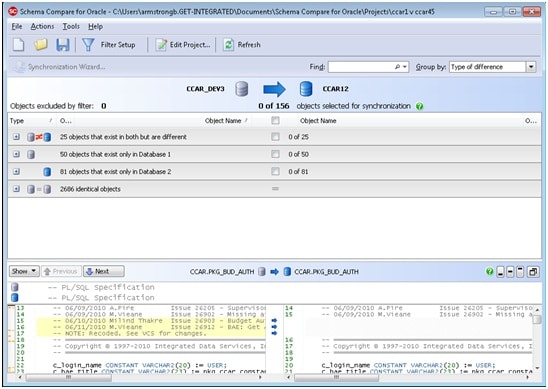 The checkboxes between the lists of object names allow you to select one or more objects that you want to perform a database migration for. The ‘Synchronization Wizard‘ button becomes enabled once at least one object has been selected for migration. That wizard then walks you through the steps necessary to either create a migration script or apply the changes directly to the target database.

Something we haven’t covered yet is one of the other areas where Schema Compare for Oracle really shines. Remember that source code view section in the main window? Well, it’s not a fixed part of that window – it’s a dockable pane that can be floated free of the main window entirely. In Figure 4 I’ve done just that, positioning the source code differences pane side by side with the main window. The important thing is that as I click on different objects in the main window, the source code review window is updated with the changes for that object: no more opening and closing a dialog between windows. One of the other pieces of software mentioned earlier provides a default “differences display” tool, and then allows you to specify a different tool if you so desire. The result, however, is the requirement for the modal window behavior. I’d much rather give that option up for the ability to navigate through the objects without having to close the source code review window again and again, which is the perk Schema Compare for Oracle gives me.

Figure 4 – Side by Side Windows

Obviously, I’m impressed with the product. However, as with any product, there is always room for improvement. Here are a few things I’d like to see added:

If you’re looking for an easy to use, reasonably priced schema comparison tool for Oracle that allows you to fine tune the kinds of differences you’re interested in seeing, then you need to take a look at Schema Compare for Oracle from Red Gate.

Bruce Armstrong is a development lead with Integrated Data Services, a company that specializes in the custom development and integration of Information technology solutions for enterprise-level customers throughout the United States Department of Defense. He is a former Oracle DBA, a certified Oracle PL/SQL Developer and has been doing Oracle PL/SQL development work for 20 years. He also currently uses Adobe Flex Builder, is a Java Certified Programmer and a Microsoft Certified Professional Developer ( Windows Developer C# ).

View all articles by Bruce Armstrong

The effects of NULL with NOT IN on Oracle transformations

0 3
IN and NOT IN subqueries are frequently used in Oracle. Jonathan Lewis explains how the optimizer handles NULL with IN and NOT IN.… Read more
0 3