With SQL Server 2019 on the way, it’s time to begin learning about all the new features. In this article, Dennes Torres demonstrates how to use the new SHORTEST_PATH function that is part of the Graph Database feature.

My crystal ball seems to be working again: The new addition to SQL Server 2019, shortest_path, was the subject of many of the technical sessions I delivered as one of the missing features of SQL Server Graph Database.

I will use an example that is similar to the first article I wrote on this topic. You can create the database and tables needed for this article using this script. Maybe you would also like to read the previous blog post about some recent improvements in Graph Databases.

Since the data is essentially a graph, a solution to visually show the results is helpful. An application like Gephi to can be used to view the graph. (You can download this application here.) To use Gephi with SQL Server, make sure that the TCP/IP protocol and mixed authentication are enabled. The app only supports SQL authentication, so you will need a SQL Server login to connect.

Follow these steps to view the graph in Gephi. 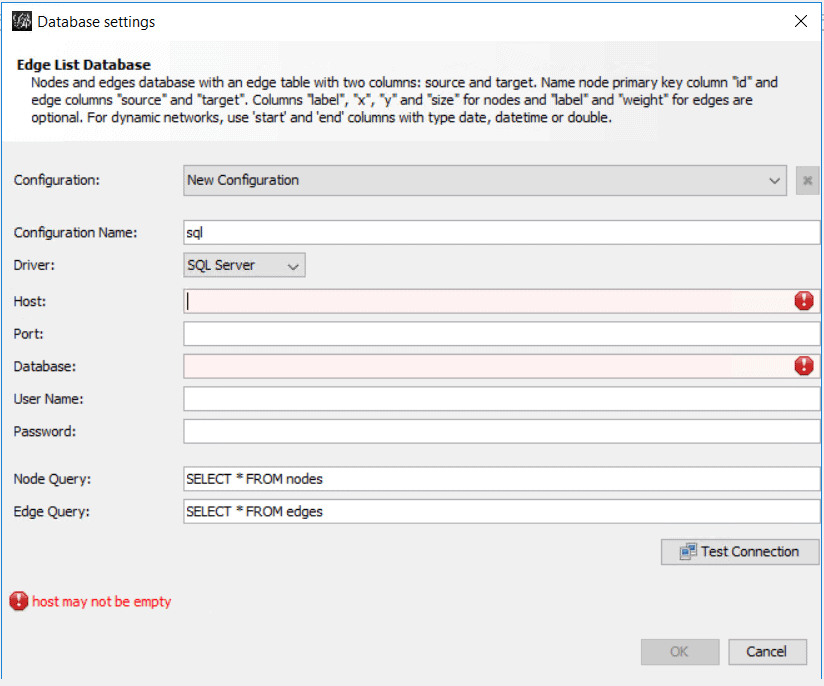 The screen itself contains information at the top of the dialog about the columns the queries need to return, and it’s important to notice these columns are case sensitive.

The nodes table in SQL Server has the pseudo-column $node_id, which is a JSON column. A good option is to extract the id from the JSON and use the MemberName as the label for the node. The query will look like this:

It’s important to note that the source and target id’s in the edge query need to match with the ids in the node query. There are some additional columns that could be used, but for this example, you’ll only need these.

The final configuration will look similar to the following image: 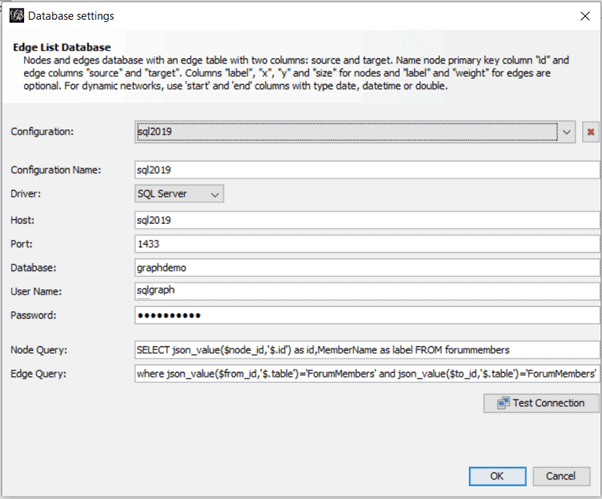 After you click OK, the next window, Import Report, involves many details but they will not be covered in this article. What’s important here is the number of nodes and edges found, confirming that the queries are correct. However, there is only a single step to be done on this screen: 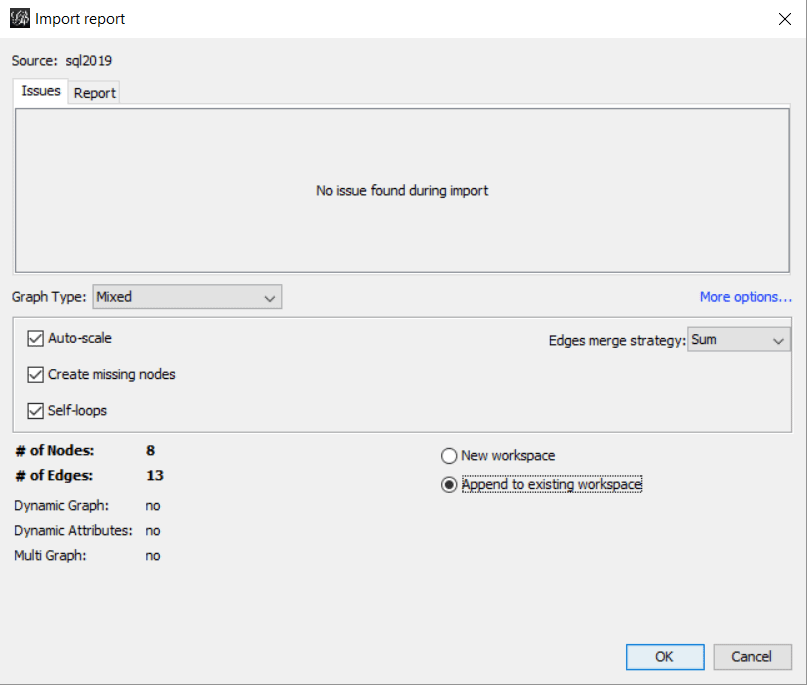 After this first screen, you will see the Workspace1 and Preview tabs and Preview Settings window. It’s time to build the graph. 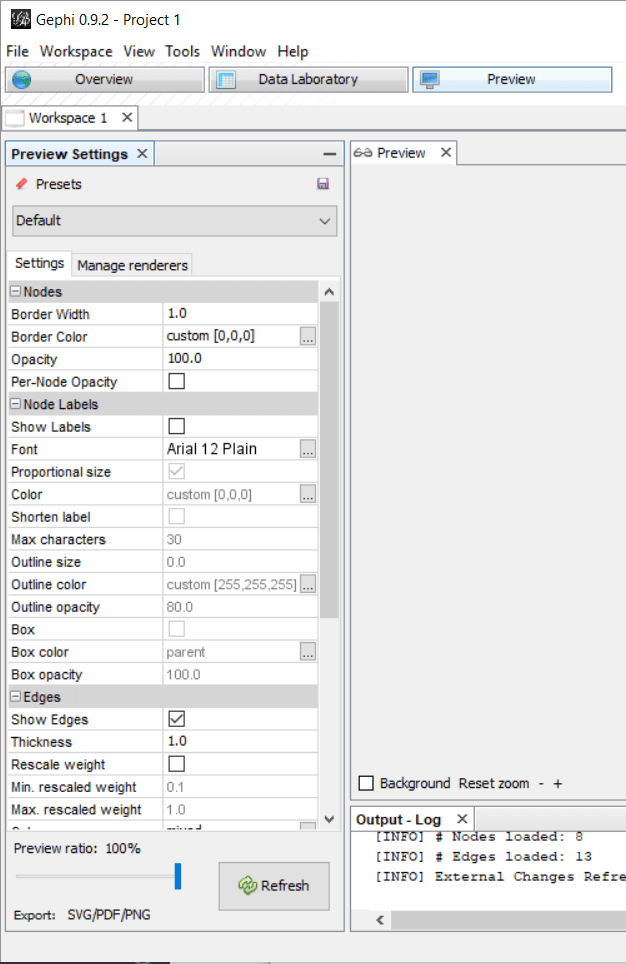 Click on the Refresh button inside the Preview Settings pane. This will result in an image similar to the one below. Note that yours may look different, but in the next step, you can verify that the nodes are connected correctly. 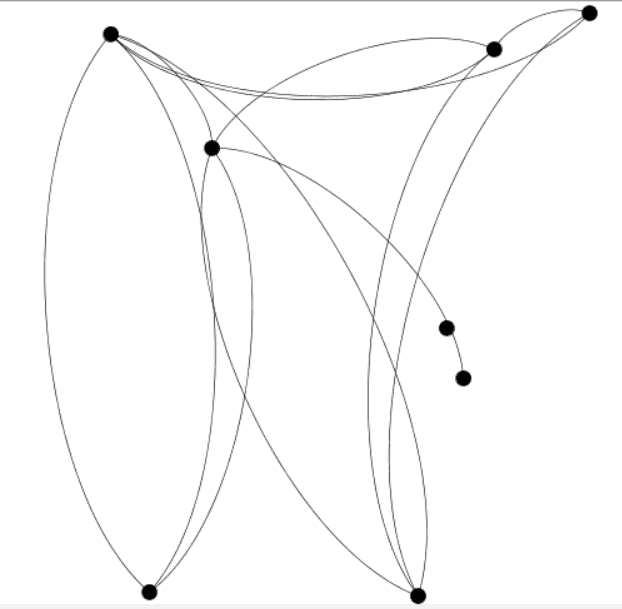 Improve this graph just a bit by making these changes in the Preview Settings tab.

After clicking refresh, the graph will change to something like the image below: 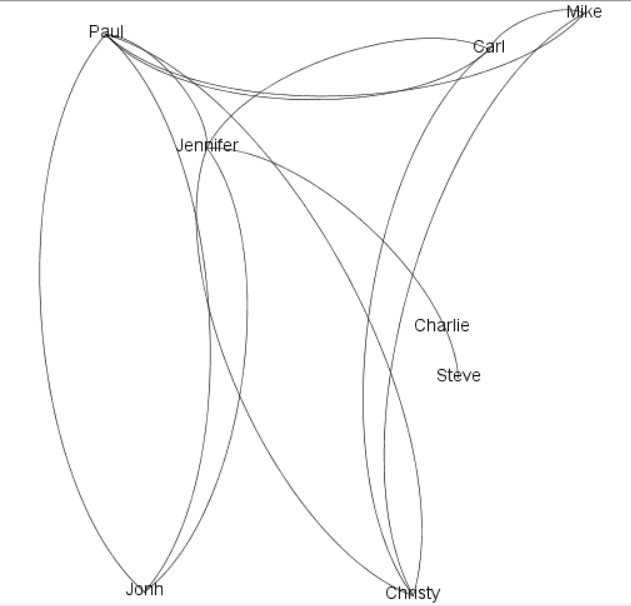 As you may notice, even a simple graph with a small amount of data can be quite complex to identify information such as the shortest path between two nodes in the graph. That’s why you need a tool to calculate this, and SQL Server 2019 can make this kind of calculation.

When you think about a function to calculate the shortest path between two points, you may think that it will be a simple function. To make this calculation work, however, you need way more than a simple function. You must establish paths among the graph data. The data has many paths, and each one has many nodes with a beginning and an end. Each path is a group of nodes, in some ways like the group by function.

One similarity, for example, is that you can’t read the column directly from the path. You need to apply aggregation functions to the set of nodes that are part of the path to read the information.

The syntax to build this query resembles the GROUP BY clause, requiring you to use aggregate functions to make calculations on every (shortest) path of nodes, getting grouped results.

To make this simpler, start to build the query over the model piece by piece. First, the From clause

The FOR PATH expression in the edge and node tables indicates these tables will be used to calculate paths, a grouping, in other words. Over the columns of these particular tables you can only apply aggregation functions; you can’t retrieve the columns directly.

You may have noticed the node table appears twice in the query, one using the FOR PATH and another without using the FOR PATH. Since you can’t retrieve columns directly from the FOR PATH tables, you can include the nodes table twice to retrieve individual values of the node columns, usually for the start node of the path.

The first two columns come from the P1 table, which is not marked as FOR PATH. The MemberID and MemberName columns are from the first node of the path. The WHERE clause will also expose this.

The other three expressions use aggregate functions. They use the following functions:

STRING_AGG: was introduced in a recent version of SQL Server and can be used to concatenate string values

LAST_VALUE: is a windowing function, but it can be used with any kind of aggregation, including a graph path.

Besides each aggregation function, you have the WITHIN GROUP (GRAPH PATH) statement, a special statement created for the grouping generated by the shortest_path function.

Finally, here’s the WHERE clause:

It’s like a regular MATCH clause that you already know about, but using the new function, SHORTEST_PATH. The first table, which is not part of the grouping, is related to the edge and node tables, which is part of the grouping. The edge and second node tables appear between parenthesis. The SHORTEST_PATH function understands this as an instruction to use recursion, creating the groups.

The ‘+‘ symbol indicates that you would like information about the entire path between each member of P1 and P2, without limiting the number of hops

You may be wondering about how Carl connects to Carl. This image shows the path: 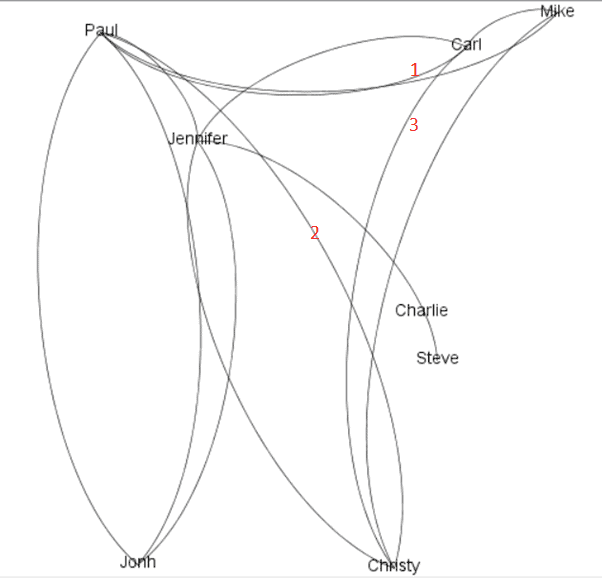 The execution plan is big. There is no doubt that you will need to take care when using it in large environments. The full execution plan doesn’t fit here, but you may notice by the piece below that the plan makes extensive use of tempdb.

You may notice the following details in the execution plan:

By adding one more predicate, you can view just the paths starting from one forum member:

The execution plan changes. You may notice the following:

If you would like to see only the path between Jonh and Steve, you may be surprised that you have to separate the query into a CTE or subquery and filter the results. One reason is that a windowing function cannot be directly filtered. The MATCH statement doesn’t offer a solution either, you can’t filter by a P2 field, for example, because it’s marked as FOR PATH.

It’s not difficult to predict: The query plan is bad. You are calculating the path from Jonh to all other members and only after this does the filter kick in to get the path between Jonh and Steve. In the image below you may notice the filter for Steve only after the sequence, after calculating all the paths from Jonh

You may have already noticed the + symbol in the Match clause. It means you allow an unlimited number of hops. However, you can use a slightly different syntax to find all the forum members that are, for example, up to two hops away from others:

However, the start needs always to be 1. If you want to see the people that are an exact number of hops from other, once again you will need to filter the result of the query:

The shortest_path function is a great new feature for the SQL Server graph database, but being unable to filter the end node or the exact number of hops without performing the entire calculation and only then filter the result is still a problem for query performance.

You can create indexes on the pseudo-columns of the edge and nodes. Considering the execution plans you saw, you can create the following clustered index for the edge:

For the nodes, on the other hand, the index didn’t help so much. If you create a clustered index, it will result in a scan operation. If you create a non-clustered index, you would need to include all the columns involved in the operation. It may sound a bit strange, but one of the columns is the graph_id. There is no pseudo-column for the graph_id in the nodes table. There is one function to retrieve the graph_id, GRAPH_ID_FROM_NODE_ID, but you can’t use this function to create a computed column. This instruction bellow, for example, will fail:

On the other hand, for the queries where you are filtering for the start member, a non-clustered index on the member id helps:

There is not much news about the more complex situations filtering by levels or end node: It’s an additional filter after all the calculations of shortest_path.

The function shortest_path is an excellent addition to the graph database features; however, the two limitations it has may create heavy queries in the environment: