The Power of Python and SQL Server 2017

Python is new to SQL Server 2017. It is intended primarily to allow the use of Python-based machine-learning within SQL Server, but it can be used for far more than this, with any Python libraries or Frameworks. To provide an example of what is possible, Hitendra shows how to use the feature securely to provide intelligent application caching, where SQL Server can automatically indicate when data changes to trigger a cache refresh.

MS SQL Server 2017 has added to its Advanced Analytics Extension, now called ‘Machine Learning Services ‘, by enabling SQL server to execute Python scripts within TSQL via ‘Machine Learning Services with Python’. This basically provides a way that the database programmer can pass data directly to and from Python. The usefulness of this is not limited to providing machine learning capabilities for data analytics, because Python has many readily-available modules and frameworks to address many problems such as performing heavy computation work with data structures, graphical processing for analysis, networking operations, database operations, web operations or local/network-based file system operations. Obviously, many of these are best done in middleware, but in database systems, there are times when it’s more convenient to have a direct communication to an external system, instead of relying on an external process to perform the task by polling the data source. This makes sense when it is not an issue to have a solution such as this within the database or data tier, and when it does not provide any security concerns.

Here, we will try to demonstrate an example of the use of Python within the Advanced Analytics Extension, showing how a database can trigger an external process to perform an activity on the data that is provided as a parameter. This is designed to take into account issues of security, data reliability and transaction response time.

Some tasks can be done much more easily by calling a Python script from SQL rather than relying on middleware. This is particularly the case where the task is initiated by an event within the database. The task might include

Naturally, there are few potential disadvantages

Weighing up these advantages and disadvantages, there still seem to be occasions when Python can play a useful role if it can minimize the risks. As an example of this, let’s consider how we can use Python to build a Data cache system for use by the application tier.

Caching of data can be an effective way of improving application performance. At the cost of storage overhead for the cache, we can make useful performance gains when faced with such things as chatty network communications with the database, and high resource consumption by the database when faced with repetitive queries. When we build a cache infrastructure, we are faced with the common problem of when to refresh the contents of the cache. We tend to adopt the simple solution of rebuilding cache after a certain time interval. However, this is extraordinarily inefficient. It is much better to refresh the cache when the data changes, and refresh only what is changed. We can do this close to real-time, at the point when the data is created, updated or deleted. There are many tools and frameworks available to solve the problem of refresh, but they suffer from the problem of how to determine what has changed in the data and when the changes are committed. The database is best placed of all to be able to do this.

For our caching system, which is available in source here, we will restrict ourselves to the Microsoft stack for everything barring Python itself.

Here is the pictorial representation of our example solution cache system: 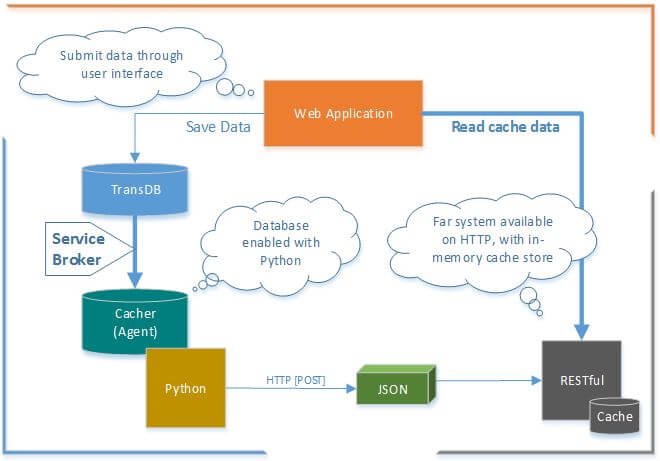 The architecture of the solution

As an aside, there are some prerequisites and some more information we need to consider.

The WebApplication has two main MVC actions; one to update a new entity in TransDB with HTTP verb POST and another action to return list of Product Type from cache with HTTP verb GET. 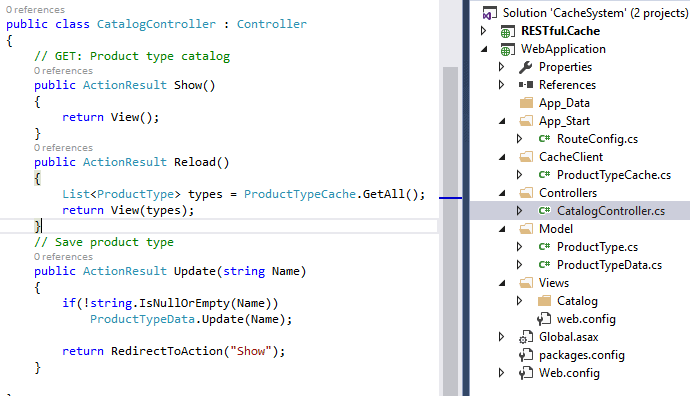 RESTful.Cache has two action methods, one to update cache with the newly-added entity Product Type with HTTP verb POST, and another to get all the cached Product Type from local cache. 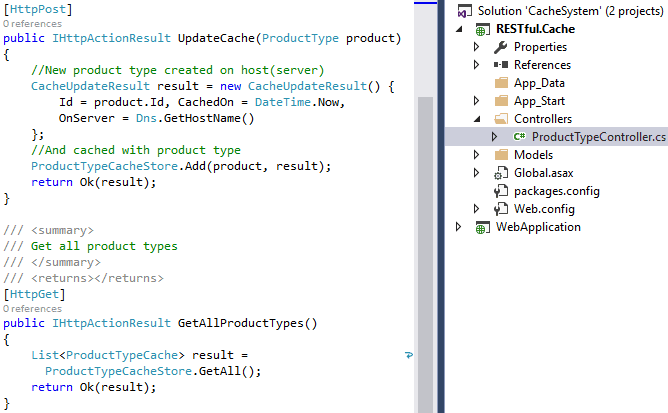 For our example solution, both applications are hosted in IIS under individual application pool identities to keep applications secured. But for the actual system implementation, the hosting environment can be an individual webserver in either an intranet or internet environment.

The abc\WebApp_SVC user is for the WebApplication having authorization rule mode to allow the accessing of the RESTful.Cache application.

The OLTP database TransDB has a few objects, including tables, stored procedures and Service Broker objects. 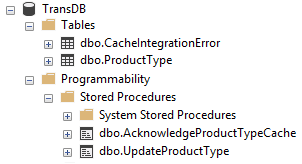 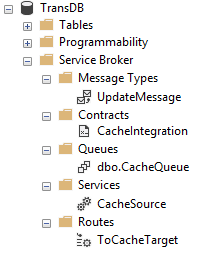 For our example solution, TransDB is a source database which creates update cache message when a new ProductType record is created, a message to perform an action, for that it has UpdateMessage message type, a CacheIntegration contract to send a message with CacheSource service to target the database. The Service has a CacheQueue which is used by the Service Broker component to perform reliable message delivery. The ToCacheTarget route has the information to deliver the message to its target.

To eliminate any chance of increasing the transaction processing time as well as to avoid any security risk on the rest of the data in the transactional database, we will decouple the cache update process by using an agent database, called Cacher database in our example solution. The Service Broker messaging infrastructure will help to connect TransDB and Cacher databases and, event-based message processing will enable us to update the cache storage residing on the network-based system. The Cacher database is playing the role of an agent in order to perform a cache refresh when the update message arrives. It updates cache by executing a Python script.. 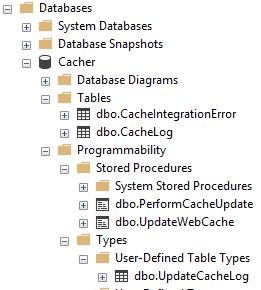 The Cacher database has: 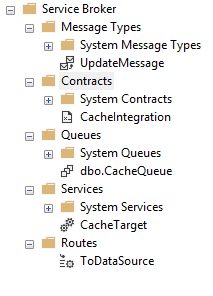 For our example solution, the maximum queue reader is set to 1 for both queues of databases. This can be increased if required to, for example if data modification is high and you need to increase the cache refresh-rate.

For our solution, the databases are hosted on same instance, so both are using same Service Broker Endpoint in order to send and receive messages. 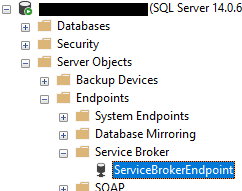 But if we want to host databases on individual instance then each SQL instance’s service account should have a Service Broker endpoint. And both SQL instances should have permission to allow for the sending of messages to each other’s endpoint. The authorization and granting of the connection can be done with the following set of TSQL commands. Note that in messaging infrastructure there is one sender and other side is receiver, as mentioned if SQL instances are part of sender and receiver then each instance should have its own process identity. The picture below is a representation of how each SQL Server is running under its own identity.

This is the SQL code for authorizing and granting endpoint connect to TransDB’s SQL instance service account [identity] in SQL instance of Cacher database.

Here is the Python script text, saved as a string in the TSQL variable @UpdateCache. It has the UpdateCache method with logic to perform an HTTP POST call to RESTful.Cache by passing a data object with Name and Id fields, which are received as an input parameter. It Receives a JSON object and returns it as output result of the method to the caller.

At the end of the script, the returned object is transformed into an array, so it can be structured as a SQL result.

There are a few things worth noting while working with a Python script in SQL server.

TransDB is an OLTP database and we do not want any security breach for any kind of attack on the system, hence with our example solution approach, such database can be hosted on a SQL instance where ‘Machine Learning Services’ is not installed. Cacher is an agent that is able to reach a network-based system, so can stay on the SQL instance where Machine Learning Services is installed. Both SQL instances can have an individual service account identity, which has been authorized to connect to Service Broker endpoints for a specific port only. The other way to securely authenticate communication is by using certificates. For Service Broker endpoints authorization refer to Microsoft.Technet: How to: Allow Service Broker Network Access by Using Certificates (Transact-SQL) for more details.

All components put together

After placing all the components in place, here is our WebApplication that allows us to create a new ProductType and list the same product type from refreshed cache with a RESTful HTTP call. Here behind the wall there are components which are managing data and cache is invisible to the frontend application. 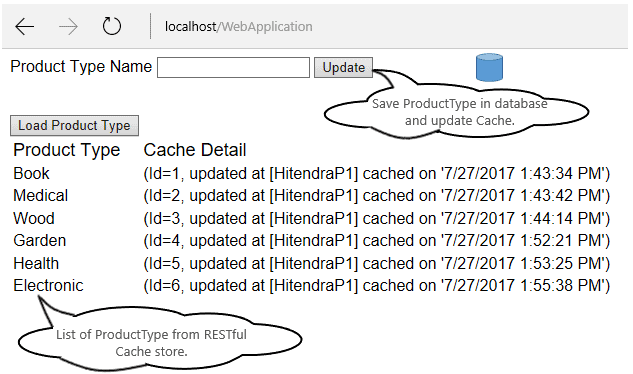 Applications such as e-commerce, healthcare an e-governance can benefit from a good caching implementation. By extending the use of technologies that we are familiar with, we can get a solution that is easy to maintain without the cost of learning a new framework or features.

Our example solution meets what we need because

The source code for this project is available here in githib. https://github.com/hi10p/SQL17Python

View all articles by Hitendra Patel

0 1
You can find memory leaks in Python code with tracemalloc. In this article, Priyanka Nawalramka demonstrates how to use tracemalloc to find the leaks.… Read more
0 1

0 4
You can summarize data to get counts, averages, sums, and more using GROUP BY in T-SQL queries. Greg Larsen shows you how.… Read more
0 4