When Microsoft introduced their ‘Always On’ technology, they made the statement in TechNet, which our team has since had confirmed, that they cannot support distributed or cross-database transactions (CDT) with Always-On Availability Groups because they cannot guarantee data in such circumstances. It is made clear in the article ‘Not-Supported: AGs With DTC/Cross-Database Transactions‘ by the ‘SQL Server Always On support team’ as to where the problem lies. Each database commits independently within a cross-database transaction. This means that a failover could happen after one database commits a transaction but before the other database does, even for two databases in a single availability group. Always On synchronises each database transaction log across to the secondary independently, and this is where the issue lies when Cross-Database transactions are invoked. Our team, however, wanted a better understanding of Cross-Database transactions so we could understand this problem in more detail. Did it, for example, happen with databases on the same instance, or was this a problem that only happens when transactions are managed by Microsoft Distributed Transaction Coordinator (MS DTC)?

This exercise taught us a great deal about how to go about investigating Cross-Database transactions. This should prove useful to anyone who needs to assess the impact on their current systems and the impact it would have with any new technology that is introduced in the future.

Method used to understand the process

NOTE: An important point here, CDT does not use MS DTC. The transactions are controlled within SQL Server code. MS DTC is an application run through Windows O/S specifically to handle cross instance/server transactions. . This information was provided by Shaun (Senior Microsoft Engineer) who debugged the code for us and isolated how CDT was working. To prove this, if you run a trace profiler against a CDT with the MS DTC counter enabled, you can confirm for yourself that MS DTC is not invoked.

To carry out the tests we chose, for simplicity, to use SSMS where possible. Our main tools were:

Description of the columns returned from sys.fn_dblog

This is a brief description of each of the columns returned in these tests:

Baseline 1 was executed against a single database. The entries from the transaction log were then read. Criteria:

From reading these, we can see that single database transactions are straightforward; the log will start the transaction, indicated by “LOP_BEGIN_XACT”.

Once the IUD statement has been executed, it will enter the relevant row in the transaction log to indicate the action carried out; in this case LOP_INSERT_ROWS.

Finally, when it reaches the commit statement in code, it will carry out the commit and enter LOP_COMMIT_XACT in to the transaction log. Those are the complete set of rows entered in the log for this type of transaction.

The [Master DBID] and [Master XDESID] are currently NULL as these columns are not used in non-CDT transactions. They will become important later when looking at CDT.

Baseline 2 deals with a failed transaction and the entries made in the transaction log. Criteria:

Baseline 2 starts off with the same entries as Baseline 1; LOP_BEGIN_XACT and LOP_INSERT_ROWS. At this point the transaction fails and the entries in the transaction reflect this. First any statements that had run (insert rows in our case) are rolled back and then the transaction is aborted LOP_ABORT_XACT. The single database transaction rollback is important later when considering how CDT handles the same issue.

NOTE: Any failure before a commit will automatically be rolled back with one exception when dealing with CDT. This exception will be discussed later.

Now we have a basic understanding how transactions are written to the transaction log, it is time to run the tests that will help us to identify how a CDT works in the log. The tests have been designed to identify the key processes operating within the CDT process.

To begin, we know that CDT uses a two-phase commit as described in the article “Not-Supported: AGs With DTC/Cross-Database Transactions” and that one of the databases involved in the transaction will act as the coordinator. This is important to understand, because it gives us a way of spotting in the log where a CDT is taking place. Once this database is identified and we are confident we can identify it in future, possibly in different scenarios, then we can look at what entries are added and when they are added to the transaction log, and assume that a Cross-Database transaction is taking place.

In each of the above tests, the CDT stored procedure was executed from a different database. In each case, the database with the lowest DBID was selected as the coordinator. In all cases DB1 was selected. We can tell this by the additional entries that have appeared in the transaction log and by the entry in the [Master DBID] and [Master XDESID] columns in each LOP_PREP_XACT entry. Points to note:

The two phase commit is similar conceptually to that used by a distributed transaction (see Two-Phase Commit).

NOTE: Most blogs that hold descriptions of each “LOP_*” describe LOP_FORGET_XACT as the transaction is being rolled back. This is simply not the case as my above tests prove.

Test 2 will look at:

Notice that the stored procedure ran from DB1. DB1 did not have any transactions to process even though DB1 does have the lowest DBID. To summarize:

This proves that the statement means that the lowest DBID involved in the transaction will act as the coordinator; in this case DB2 (DBID 8).

Test 3 was run as a quick confirmation that running the code past the “BEGIN TRAN” but not running any transactions would result in empty logs. This is correct, no need for a blank image here. From the point of view of the transaction logs nothing has happened and the CDT coordinator has not been invoked at this point. This is important to understand for when the logs get replayed.

Test 4 looks at what happens when the transactions are rolled back due to a failure (in this case I will fail the transactions by killing the SPID as I did in the baseline 2 test. The aim is to confirm:

This failure is before the two-phase commit is invoked. With the thought in mind that each transaction log is working independently until the commit is invoked I was pretty sure I knew what would be entered in the logs.

The SPID was killed before reaching DB3. DB3 did have a transaction that it would have run if the stored procedure had not died before it reached the code. We see the transaction log entries are only for the first two databases and there are no CDT entries in either log. With no LOP_PREP_XACT there is no entry in the [Master DBID] or [Master XDESID] column, confirming that no coordinator was invoked.

It looks exactly the same as the original Baseline 2 test result; the rollback of a single database transaction. This indicates that as far as the transaction logs are concerned there was no coordinator and the logs are rolling back the transactions independently.

Test 5 is in three phases. It breaks the transaction during the “prepare” phase of the two-phase commit. The method used to do this:

Test 5.0 shows the state of the logs at the pause before the commit. No CDT invoked entries, the transaction is shown as started and the rows inserted.

Test 5.1 shows the state of the logs after the commit has been run (with the log for DB2 (DBID 8) renamed:

Right up to this point, all failures are treated as rollbacks. Because rollbacks happen independently with complete safety, this means that the only part of a transaction that would cause data integrity to be compromised would be during the second phase of the two-phase commit, the commit itself.

NOTE: If any of the databases that are involved in the Cross-Database transaction have an LOP_PREP_XACT entry, they will check with the coordinator database (identified via [Master DBID] and then using the [Master XDESID] entry, find the transaction.

If the coordinator has rolled back, the cooperating databases will also rollback. I point this out because of what happens in the next and final stage, the commit part of the two-phase commit. It is important to note that once LOP_PREP_XACT entry is in a transaction log, the coordinator will always be contacted.

Test 6 confirms the behavior of the commit phase of the two-phase commit. This information was obtained by debugging the actual transaction code.

In the case of failure during the commit phase then the database engine will:

If the coordinating database is not contactable, then message 3429 is logged:

The conclusions I have drawn from the investigation of the transaction logs when processing Cross-Database transactions come from testing in a single instance. These findings are relevant to our current database environment.

Based on the above,  a Cross-Database transaction can only cause loss of data integrity in the commit phase of the two-phase commit.

Below I have created a process flow for Cross-Database transactions. (please click on the image to see it full-size) 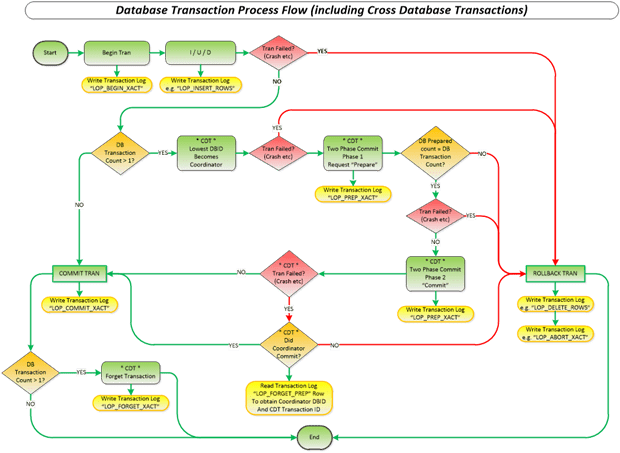 This article would not have been possible without the valuable assistance of Shaun Beasley from Microsoft. He was able to fill in blanks by debugging the SQL Server engine around the two phase commit functionality. His technical review of the article was also of great assistance

Grahaeme has worked for 25 years in IT, and has experience in application and web development as well as database development and administration. He is currently working at easyJet as a BI DBA.

View all articles by Grahaeme Ross

0 6
Instant file initialization can speed up database creation, file growth, and restores. Greg Larsen explains how to configure it and how it works.… Read more
0 6