SQL Server's Query Store, introduced in SQL Server 2016, helps to troubleshoot query performance by capturing a range of information about query usage, CPU, memory consumption, I/O and execution time, and retaining every Execution Plan for analysis. Much of this information is available through queries.
It looks set to be the most significant enhancement of SQL Server 2016.

Structure of the article series

Once the first Community Technology Preview (CTP) of SQL Server 2016 was released, we were finally able to play around with, what is, in my opinion, one of the most anticipated new features: The Query Store.

The Query Store is a feature that can help us to troubleshoot query performance, as well as capturing query execution information, such as the number of executions or the average duration of a query. The Query Store also captures every Execution Plan that has been generated for a specific query and you can then decide what Execution Plan you want SQL Server to use for that specific query.

Some common uses for the Query Store are described by Microsoft as follows:

Even though it is already possible for us to perform many of the same actions as the Query Store in earlier SQL Server versions, capturing specific query runtime performance counters or forcing Execution Plans is a complex, specialized, task. The Query Store makes these actions far easier to use and available to everyone without needing to rewrite any queries.

As a quick overview, these are some of the advantages of the Query Store:

All the information inside the Query Store can also be accessed through Dynamic Management Views (DMVs) which opens the door for custom reporting and/or alerting.

We will take a thorough look at some of the various advantages I mentioned above, and more, further on in this series of articles.

Another bonus I want to mention before we continue, is that the Query Store will be available in all editions of SQL Server! So no “Enterprise-only” this time!

Finally, it is important to understand that the Query Store is a complete new feature inside SQL Server 2016, which is only available as a preview version at the time of writing these articles. This means that information inside the articles can change when SQL Server 2016 is officially released. Personally I don’t think this is very likely at the moment, seeing how the Query Store functionality remained stable during the various CTP versions, but I’m obliged to give a warning.

What you can see in the figure above is that the Query Store consists of actually two “stores”, the Plan Store and the Runtime Stats Store. Both these stores are in-memory objects that hold query information.

So how does the Query Store access data from disk and in-memory simultaneously when we query either the Query Store reports or access the DMVs? To make this possible with the least amount of performance impact a new Table Defined Function (TDF) was developed that grabs data still in-memory while simultaneously grabbing the data that was already persisted on disk. Figure 2 below shows the Execution Plan of a query against one of the new Query Store DMVs. In this figure you can see the TDF (QUERY_STORE_RUNTIME_STATS_IN_MEM) that grabs the in-memory data and a Clustered Index Scan on plan_persist_runtime_stats that collects the data from disk.

Now that we have looked at bits of the architecture of the Query Store, let’s get our hands dirty and take look at the configuration options available to us for the Query Store.

Before we can dive into the details about all the different knobs we can turn for the Query Store, we will first have to enable it on a database. For this article series I downloaded the AdventureWorks2014 database from http://msftdbprodsamples.codeplex.com/ and restored it on my SQL Server 2016 Instance.

There are two methods we can use to enable the Query Store on a database, using the GUI inside SQL Server Management Studio (SSMS), or by using T-SQL.

If we want to use the GUI to enable the Query Store we only need to go to the “Query Store” options inside the database properties as shown in Figure 3 below. 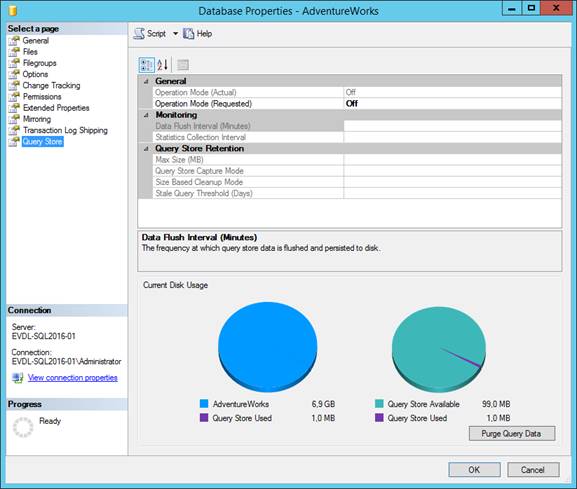 By changing the “Operation Mode (Requested)” option from Off to Read Write we can enable the Query Store and allow it to capture query Execution Plans and runtime information.

Now that we have the Query Store enabled, let’s take a look at some of the options we have to configure its behavior.

The first option “Operation Mode (Actual)” cannot be changed since it only indicates the current mode of the Query Store. The value can be either Off, Read Write or Read. When the Query Store has a mode of Read no new Execution Plans or query runtime statistics will be collected.

The options “Operation Mode (Requested)” can also be set to the same values as the previous option. Changing this option like we did when we enabled the Query Store directly changed the operation mode of the Query Store.

The “Data Flush Interval (Minutes)” allows you to set the interval how quickly the collected Execution Plans and query runtime statistics are being flushed from memory to disk. By default this option will be set to 15 minutes. Changing the interval to a lower value means Query Store information inside the memory of your SQL Server Instances will be written to disk faster, this can have a negative impact on the performance of your Instance. Setting the value to a higher interval means memory flushes occur less, but it also means more Query Store information that resides in memory will be lost when a SQL Server restart occurs. In most cases the default value of 15 minutes will suffice. However, if you experience performance degradation by the frequent flushing of the Query Store memory to disk you can choose to increase the interval (we will dig deeper into Query Store performance at a later point in the article series).

The “Query Store Capture Mode” option makes it possible to filter out queries with very low execution times or execution counts. By default the option is set to All which means every query executed against the database will be recorded in the Query Store. By setting the option to Auto the Query Store will filter out insignificant queries. What queries are filtered is determined by an internal process and we do not have any influence on it. The final value for this option is None which means no new Execution Plans or query runtime statistics are captured.

“Size Based Cleanup Mode” can be configured to automatically let the Query Store clean up data when it reaches 90% of the maximum Query Store size you configured in the “Max Size (MB)” option. The cleanup will remove the oldest and least expensive query data and stops the cleanup at 80% of the “Max Size (MB)” value. By default this option is set to Off. Setting it to Auto will enable the automatic cleanup.

The final option, “Stale Query Threshold (Days)” sets how long query data is retained inside the Query Store. By default the setting is configured to 367 days. The value of this option should reflect your historic analysis needs. If you don’t need to store query information for 376 days but for a shorter period of time it is advices to lower this option so you are not wasting space inside the Query Store for data you will never use.

Changing Query Store options through T-SQL can be achieved using the following command:

For example, to change the maximum storage size to 250MB of the Query Store on the AdventureWorks database you can use the following T-SQL command:

We can also issue multiple configuration changes at once, in the example below we change the Query Store size of the AdventureWorks to 250MB, change the Size Based Cleanup Mode to Auto and retain 30 days of query data.

One final option I would like to highlight is the ability to empty, or purge, all the data inside the Query Store. You can either do this through the Query Store properties window inside SSMS by clicking the “Purge Query Data” button in the bottom right, or by using the T-SQL command below.

Now that we know how we can enable and configure the Query Store through either the GUI or T-SQL, we will take a look at some of the build-in Query Store reporting available through SQL Server Management Studio in the next article: Introducing the SQL Server 2016 Query Store #2 – Query Store Build-in Reporting.