SQL Server keeps the most-used execution plans in cache, so it doesn't need to recompile the same queries every time. How can we benefit from this to find potential performance problems in execution plans? Let's see how to find some opportunities for optimization by using information held in SQL Server's plan cache.

Let’s see some important information that we can find in this DMV:

I’m simplifying the optimization techniques, but in this article the focus is on how to find opportunities for optimization.

The sys.dm_db_index_usage_stats DMV has information for user actions and system actions, so we have user_scans and system_scans, but we can ignore the system information.

The first step is to identify the database that is most affected by these problems. We need a query for each type of problem, whether scan or lookup (a seek is not a problem, but the ratio of seeks to scans is information that will help us to identify scan problems).

Let’s see the query to find the database with most scan problems :

It doesn’t make much sense to sum the user_scans of different indexes, so we get the maximum and the average of user scans to find which database deserves our attention.

Here the result for my SQL Server: 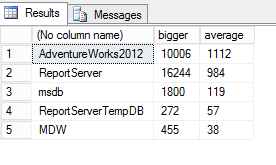 This query needs to run in the chosen database (of course, you will change the database name on the query):

Side note: These examples were created using Adventureworks2012 database, that you can download from https://msftdbprodsamples.codeplex.com/releases/view/55330, but the tables ‘bigproduct’ and ‘bigtransactionhistory’ were created by Adam Machanic and you can find the script at http://sqlblog.com/blogs/adam_machanic/archive/2011/10/17/thinking-big-adventure.aspx. The scan activity was generated using SQL Query Stress tool, also from Adam Machanic and you can find it at http://dataeducation.com/sqlquerystress-the-source-code/.

Notice that I also used the index_id to identify the index as clustered or nonclustered. I also included seek information so we can compare scans and seeks to decide which index deserves our attention.

As a result we can clearly notice that the table ‘bigproduct‘ and its clustered index have a lot of scans that we need to focus on.

Both queries that I’ve used so far were done to investigate the scan problem, but you can use the same queries for the lookup problem: You just need to change the user_scans field to user_lookups field.

By using these queries, we found which database and indexes deserve our attention, but how can we find those query plans that will identify the queries that are responsible for causing these problems?

As a second step we can use SQL to identify the query plans in cache that have these problems, so we will then be able to work out which queries we need to optimize.

Using the DMV sys.dm_exec_query_stats we can retrieve all the queries in cache and identify those query plans with problems.

The query_plan field is in XML, but if you view the query results as ‘result to grid’, the query window in SSMS recognizes the schema and shows the plan graphically for us if you click on the link. That’s good for ad-hoc exploration by inspecting single plans, but not for systematically searching through the plans for those with a particular criterion. Unless we can filter the results based on the XML, we would need to look one by one. So, the best option is to use Xquery. 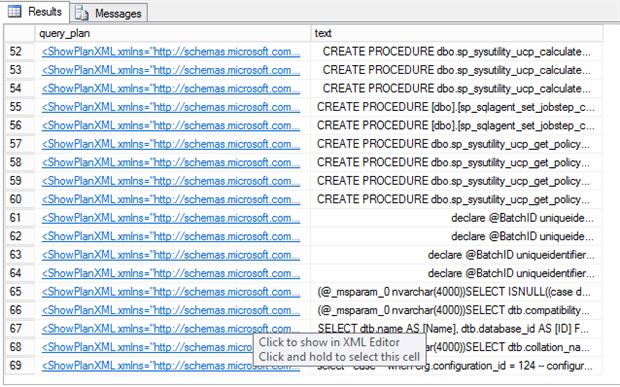 In order to sensibly use XQuery to search through XML, we need information about the schema that the XML uses.

The schema of this XML is published at http://schemas.microsoft.com/sqlserver/2004/07/showplan

There are plenty of possibilities for finding execution problems using this method, but I can only show a few, and to do different searches, you will need to study the schema.

By looking through the schema, we find that we have a RelOp element with a LogicalOp attribute that we can use to find all plans that have index scans or table scans. Let’s see the query :

The XML of the query plan is typed, so we need to declare the namespace in order to use xquery. The schema is a bit complicated and you need to be careful when you create your own queries. For example, it would be a mistake to query for the elementIndexScan, because the element IndexScanis used for all index operations, including seeks and lookups.

The next step is to filter the result by a specific index. We already found the indexes with most scans, so now we can find out which plans are causing this. Following the schema, the name of the index is an attribute in the Object element, inside the IndexScan element that is inside the RelOpelement.

So this will be the query:

If this query results in too much plans, we can use other fields in sys.dm_exec_query_Stats to find the plans that we need to optimize. For example, we can use total_worker_time field to order the result by CPU time, like this:

In my simulation, the result is only one query plan. We have the text of the offending query and we can see the plan graphically if the query results as ‘result to grid’ and we click on the link. SSMS shows even the ‘missing index’ information, making it even easier to solve the problem.

We found exactly the query causing the problem and…

Another example of the use of DMVs is to find the plans with index lookups. If we change the first query to calculate the amount of lookups we will notice a lot of lookups in ‘adventureworks2012’:

Trying to find the index that is causing this will reveal to us where to focus: 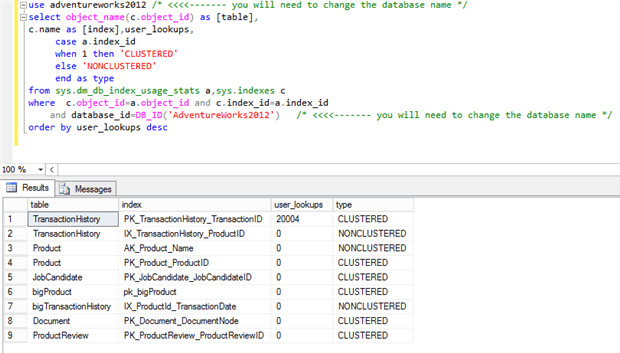 Finally, to find query plans with lookups we need to filter by the lookup attribute in the IndexScan element. The new query:

In this example we will find out that, if we remove two of the fields , the ‘quantity‘ and ‘actualcost‘ fields, from the query, then the lookup will disappear. Of course, this might not be possible, in which case we’d need to look for other solution, but this is not the focus of this article. 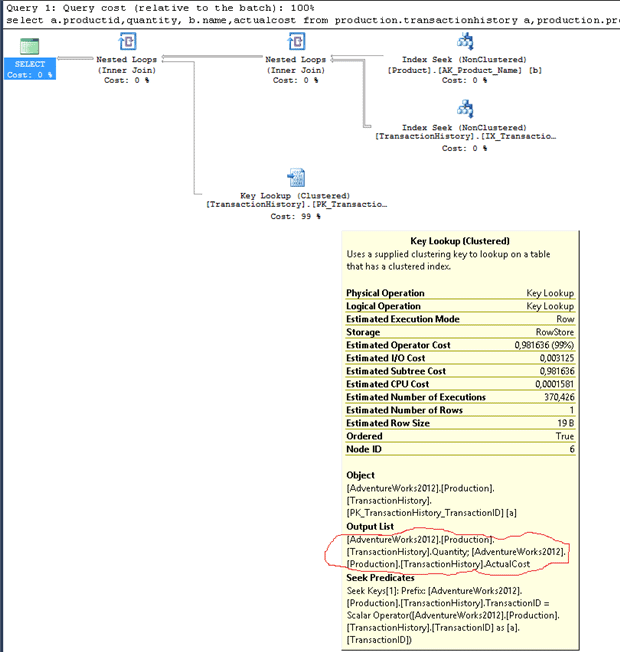 We can see the cause of the lookup

It’s nice to see that we can search the query plans in cache to find problems, but it isn’t practical to use queries like this in daily optimizations. So, how can we make this more practical? Simple: We can create a reusable function so that we would then no longer need to worry about the complexity of the query syntax any more. So, we can create queries for each of the main problems in query plans and then create one function for each query.

The XQuery ‘exist()‘ method only accepts constants as parameters. So, the only solution to turn the name of the index into a variable is to use sql:variable expression to access a variable from inside the xquery expression.

Here is the resulting function:

Notice that I included the function ‘fn:lower-case‘, otherwise the function would be case-sensitive like xml.

Now the query to find the plans in the cache that do index scan over a specific index becomes as simple as a single select:

The same applies to lookup problems :

Now, the final touch: As we are creating re-usable functions, the best approach is to return more fields from sys.dm_exec_query_stats so the functions became more flexible.

We can start by building a lot of queries that exploit the power of XQuery to search the execution plans stored in in cache to find opportunities to optimize queries and avoid potential problems. We can then turn these queries into functions to make them reusable. When creating new functions, it is well worth studying the schema of the execution plan and exercising due caution about the performance of the queries when using them on a production server. Though they are very handy in tracking performance problems, these queries aren’t fast.

0 38
There can be a great difference in the performance of a particular routine in a test database, and in a fully loaded production system. When you hit performance problems in a database under load, and there is excessive locking and blocking, how can you determine exactly where the problems lie, in order to fix them? Read on...… Read more
0 38

How to troubleshoot and fix PostgreSQL performance issues

0 4
PostgreSQL database performance is critical for application performance. EzzEddin Abdullah shows how to get information about a query’s performance from the execution plan.… Read more
0 4