Because so much of the work of the DBA involved doing things in the right order without missing steps out, checklists are a great way of ensuring that the chance of mistakes is minimised. DBAs generally create the sort of checklist style that suits their way of working, while making their work easier for them and as reliable as possible. 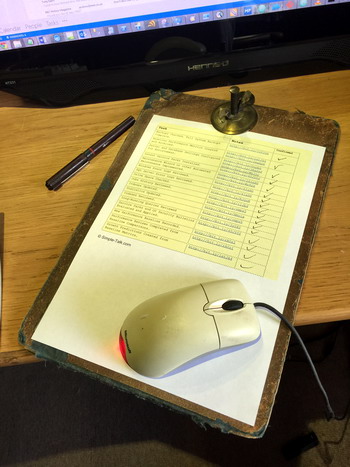 As DBAs, we pride ourselves on knowing our trade. Unfortunately that pride often leads us to believe that we don’t need to have written instructions for common tasks, and that our memories are infallible. Well, sadly, no matter how often you practice your work you will, sooner or later, forget something and make a mistake, unless you use checklists.

I can appreciate that the idea of using a checklist may seem, well, insulting in some way: It’s as if we’re admitting that we’re not good enough to fly by the seat of our pants, and instead need someone holding our hands as we step down the list. But what’s more important, preserving our egos or getting our jobs done correctly and quickly?

Professionals of all trades use checklists without fail. Airline pilots and crews famously have thick binders containing detailed steps for almost every situation possible. Astronauts have the same, only likely even thicker. And thanks to the Affordable Care Act, some hospitals are even making their doctors use one (I don’t know about you but the thought of someone cutting me open without using a checklist is doggone near terrifying!). In fact, a Harvard trained physician wrote a New York Times bestseller on the very subject of checklists. The very best DBAs use them, and always have done. So let’s leave our egos on the sidelines, shall we?

Checklists standardize our work. I previously wrote about the advantages of standardizing our work, some of which include:

Finally, you can, by using checklists, ease the level of concentration we need to apply to routine tasks of  IT professionals. Our work can be stressful enough, without constantly having to make micro-decisions about how to proceed in every eventuality while executing a task. Working at this pace  can lead to poor decision making, so if we can avoid it, we should.

The work of the DBA is ripe with opportunities for checklists. Here are just a few examples, along with suggestions or trigger-questions to help you create your own.

There’s a couple of very good reasons why you should use a checklist when installing SQL Server. First, it’s (hopefully) not something that you do very often, so the steps aren’t likely to be fresh in your mind. Second, it’s a complex process, at least if done correctly (in other words, not “Next, next, next, install”). For example, are you going to remember to grant the SQL service account the “Perform Volume Maintenance” right every time (because you really should)? Finally, it’s in your best interest to make sure that all your servers are as standardized and similar as possible. Do you really want to be trying to figure out where that script is that you keep on servers for emergency restores when it’s 2AM and your users in London are calling?

Restoring a database is easy, right? Right click on the icon in Management Studio, select Restore, next, next, next… Oops! I just tried to restore a database to the “C:” drive and crashed my server when it took up all the space!

While a checklist is essential for restoring databases (because again, it’s hopefully not something you have to do often), it’s also true that it’s something that should be routinely practiced and drilled. This allows you to complete the steps as quickly as possible, even while you are still following the checklist to ensure that nothing is missed.

Often times, restoring databases is done in a live-fire mode, where critical processes may be offline until the task is complete. But it’s also true that restores are sometimes part of routine processes such as refreshing test environments. Since the procedures may vary from instance to instance based on the situation, you may want to consider multiple, specifically-tailored checklists.

Here’s some good questions to think about when making this checklist:

This is one of those tasks that I see done all too often in a  haphazard and unplanned manner. So often, in fact, that I wrote an article describing in detail how to apply the rigors of the scientific method to performance tuning in SQL Server. Too often, data isn’t collected and analyzed in a methodical manner, nor are there a list of common options to resolve known problems and how to execute them.

With that in mind, here are some examples of steps that you may want to include:

This checklist could go on for quite a while (and probably should be the subject of another article), so I’ll stop there for now.

Setup of a Cluster

This goes hand in hand with the installation of SQL, in that it’s something you probably don’t have to do very frequently, but when you do it’d better be right.

Things to think about here:

Addition of Someone to the DBA Team

While this one isn’t technical in nature, I’d say it’s no less important than any of the others. If you think about it, there’s probably quite a number of steps required just to ensure that a new DBA obtains all the requisite rights and privileges to operate, let alone things like training or tools.

Here’s some of the likely things that need to happen to get someone up and running on your team.

By making the on-boarding process deliberate and explicit, you’ll be able to get new resources up to speed quicker and in a more standardized way.

Checklists are an essential part of the daily work and life of a DBA. They ensure that we complete our work consistently and successfully, remove the burden of decision making, and ease the on-boarding of new resources. As a final question then, we might ask, how do we implement them?

The answer is that the implementation doesn’t really matter. You could use a Word document with check boxes, a paper document that gets printed out, a Project document, or even a custom web site that tracks their use (there are also plenty of online options available). I would just say that the best systems have these features:

Ultimately, it’s far more important to start using checklists at all then to have some kind of airtight implementation. So what are you waiting for? Start making your checklists and see an immediate improvement in your work.