Windows Server 2012 Hyper-V Cookbook is a comprehensive resource for administrators and consultants looking for practical examples of Hyper-V technology. Beginners unfamiliar with Hyper-V and those who have worked with earlier versions can benefit from this book. 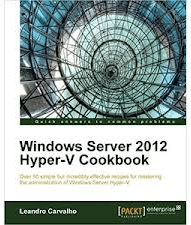 This book is a comprehensive resource for administrators and consultants looking for practical examples of Hyper-V technology. Beginners unfamiliar with Hyper-V and those who have worked with earlier versions can benefit from this book. The nine chapters of Windows Server 2012 Hyper-V Cookbook, written by Leandro Carvalho, include topics like best practices, tips and tricks, and examples of how to automate common tasks.

Virtualization has proved itself as a means for organizations to reduce costs by strongly isolating applications without the cost of putting each one on a separate physical machine. The new version of Hyper-V, introduced in Windows Server 2012, has a number of improvements in areas such as high availability and mobility, and it now provides the basis for managing and creating core components of a Microsoft Private Cloud.

Ideally, Microsoft would like every organization to virtualize their server environment using its core Server Virtualization Technology named Microsoft Hyper-V. Hyper-V was first released in Windows Server 2008 RTM and was updated to be part of the recently released Windows Server 2012 OS. Since Hyper-V is a much newer technology compared to competitors like VMWare, system administrators often have a hard time finding practical resources on Hyper-V technology.

One issue with Microsoft Hyper-V is that the documentation is not easily available in one place. One has to explore the internet to collect the practical documentation, whichtakesa considerable amount of time. For administrators new to Hyper-V, it’s difficult to start learning it without the documentation already in hand. On other hand, for administrators with virtualization experience, it is necessary to have a solid understanding of how all the components of a virtualization product work under the hood before they can start to think about implementing the technology in their production environment. Even if you find enough details about Hyper-V it is hard to avoid noticing how poor the documentation is in comparison with VMWare’s.

WindowsServer 2012 Hyper-V Cookbook covers the installation and networking configuration early on so you can get some hands-on experience with Hyper-V before exploring the rest of the chapters. In the Appendix you’ll also find a list of the differences between Microsoft Hyper-V and VMWare.

With all the features of Hyper-V covered, you will learn everything from deployment to security, high availability, configuration & management, troubleshooting, monitoring, and Hyper-V Replica as introduced in Windows Server 2012.

Note: Most of the screenshots throughout the book are taken on a computer running Windows Server 2012.

Getting started with Hyper V

The Hyper-V cookbook’s chapters are organized in the order the administrator would perform the task, beginning with installation, configuration and deployment, through to using the various monitoring tools, including Microsoft Perform. The opening chapters not only cover the installation and configuration, but also how to use the Sconfig.cmd tool to configure various Operating Systems components on Microsoft Windows Server Core.

In some cases, it’s easier to use the command line tools rather than the GUI. As a virtualization administrator, you will come across a number of scenarios where you will need to perform at least three known operations (CREATE, MODIFY, DELETE), and export and import Virtual Machines. Some tasks might take longer to complete than expected. We are given a number of PowerShell commands which can be used with Hyper-V, as well as examples of PowerShell scripts and commands which can be re-used to automate daily routine tasks. This is the most interesting chapter for me as enjoy all kinds of scripting and programming; saving a fair amount of time for virtualization administrators.

PowerShell examples are outlined throughout the chapters, so virtualization administrators do not need to buy another PowerShell book to be able to manage Hyper-V. The book, of course, does not list all the PowerShell cmdlets for Hyper-V, but those provided in book should be a good list to get you started managing Hyper-V and virtual machines.

A virtualization administrator would want to test a virtualization product and explore its features without spending too much time on installing an OS, configuring it for first use, etc. Hyper-V Server, which is a free edition, can be downloaded from Microsoft and booted from a USB stick directly. The author outlines the steps required to configure a Hyper-V USB Boot stick.

Windows Server 2012 Hyper-V Cookbook not only covers the new features introduced in Windows Server 2012, but also how Hyper-V should be used in production more efficiently. When I say more efficiently, I am talking about all the technology which must be applied when implementing a product in an IT environment. This includes providing security, High Availability, configuring monitoring, and disaster recovery. This book covers how to configure security on Hyper-V Servers and Virtual Machines running on it using Authorization Manager.

We are also given a disaster recovery scenario and two types of monitoring; Real-Time Monitoring and Logged Monitoring. We also see how you can use both types to monitor your Hyper-V Server, and how to monitor Hyper-V Replica (a service introduced in Windows Server 2012). A little troubleshooting content on Hyper-V Server has also been added so that administrators can troubleshoot the issues on the go.

Getting Ready – How To Do It – How It Works – See Also

The author has defined a methodology for each topic, so before administrators perform a task, they are thoroughly taken through the steps below:

Getting Ready: This is a checklist which is provided throughout the chapters so administrators know what components they’re working with before they start a task.

How To Do It: These are step-by-step instructions on the task at hand to make sure administrators know how to perform each task.

How It Works: This is an important section when it comes to explaining the technology in more detail. Administrators are often least concerned with how an upgrade process works internally, but How It Works is very helpful when you are exploring a new technology and wants to learn more about the topic! That’s where this book comes handy for administrators who want to know how the components actually work.

A snippet from the book is given below for How It Works section:

See Also: This section provides further resources for administrators looking for more information on the topic.

Windows Server 2012 Hyper-V Cookbook offers a good overview of how to use Hyper-V Best Practice Analyzer and various tips and tricks on how to configure Dynamic Memory for Virtual Machines. We learn how to configure a Hyper-V environment to be operated from a workgroup workstation/server. Providing security is also a major concern for any business application running in your environment, hence we’re also given steps to configure Antivirus on Hyper-V Host machine.

High Availability (HA) is an important business concern for organizations. Avoiding any single point of failure for applications running in production is crucial for avoiding disruptions to business continuity. Hyper-V is one of the ways to secure HA. The author provides information on how to configure High Availability of Virtual Machines and Hyper-V Hosts by explaining the Quick and Live Migration features. The Live Migration feature of Hyper-V is explained in great detail by keeping the Cluster Shared Volume 2.0 introduced with Windows Server 2012.

This book is not for everyone. It’s geared primarily toward administrators who don’t already have practical experience with Hyper-V, while remaining relevant to those with a more advanced understanding of the technology. The book works well on its own; but it doesn’t cover how a Hyper-V must be deployed in production while considering planning and sizing needs. Another point is the lack of comparison between other virtualization technology such as Citrix XenServer, which limits its usability for Enterprise and Solution Architects. A consultant will surely benefit from this book but, of course, she cannot provide proposals on Hyper-V to customers just based on the few pages printed in this book.

The beginning chapters of this book provide the groundwork for learning Hyper-V, so beginners should make sure they understand everything that’s been presented before moving on to the more complex topics. The Appendix is an important resource for Hyper-V architecture and components, it doesn’t cover all the components of Hyper-V, however, the author has explained the necessary components in terms of what is covered in the book.

Overall, this book is very good resource for virtualization administrators who want to learn how Hyper-V works under the hood and how they can use features of Hyper-V more practically and efficiently in production. For experienced Hyper-V administrators, it is a comprehensive resource. This book gives them opportunity to uncover new features introduced for Hyper-V in Windows Server 2012.