This blog is different than my normal T-SQL blogs I almost always do. But I know that I cannot be the only computer programmer who wants to wear a smart watch when working to get some of the health and alert benefits that they can provide. The band though, has always been a blocker to wearing a watch all day long for me. I have talked to other programmers who have used other tricks, like loosening the band and sliding it up on their forearm, but when I tried that, it just felt weird.

I had a Microsoft Band when they first came out and got Microsoft Band 2 soon after it came out. At the time, the fitness application didn’t matter that much to me, so I didn’t really mind taking it off when I was working. The Microsoft Band 2 had a serious flaw, in that the band would split. On my second one, I finally gave up, and just went wrist deviceless.

Yet about 3 years ago, that changed. I joined the YMCA and started going to the gym daily. I tried several brands of fitness bands, and they were ok, but the often didn’t catch when I was working out, sometimes registering low heart rates when I could physically feel my heart racing. The killer though was that none of these bands we any more comfortable at my desk than the ever so chunky Microsoft Bands were, so getting the full day of data never really happened either. So, I pretty much gave up.

Not too long after, I noticed that Wal-Mart had the Series 1 Apple Watch for 150, so I decided to give it a go and snatched one up. It was 2 series behind the curve at the time, and was definitely slow… but it actually captured my heart rate and exercise dead on. It was not the most comfortable to wear when working with the original sports band, so I again had to take it on and off when sitting down to work (something I do 8-13 hours a day!). Luckily though, the Apple Watch has a removable band, which allowed me to find my current band which is in fact, blog-worthy for a programmer audience.

My goal has been to the thinnest possible band where you can continue to wear the watch and type with your wrists resting on your keyboard literally all day long without really noticing that it exists. It is an impossible challenge, but I found 3 possible solutions, two that I have tried, another that I have seen recommended multiple times.:

This looks really promising, but at $94, I never quite got myself to purchase it, since that is almost how much my first Apple Watch cost (not my second one though!)

A soft watch band, similar to this one at Amazon

This was the band I used for over a year, and I originally paid about what the one in the link is at $10. This is a great solution but has one potential drawback. Due to the size of my wrist, particularly back when I first started wearing it, the little plastic knob on the end of the fabric cut into my arm.

So I stylishly cut it off, and wore it until it became frazzled on the end as you can see in the picture. 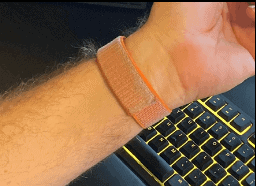 Eventually though, this band got where it was just far too dirty to wash anymore, so I went back to get a new one. As I was hunting around to see if I could find an interesting color for my band, I saw the next set of bands.

This band is an incredibly thin bit of elastic that you have to provide measurements for when you order the band and has no latching mechanism at all to get in your way. It is a moderately expensive third party band at around $25, but the thinness has made it worth it to me.

It is about a millimeter or so thick, and the fit for me has been great so far. Due to the lack of a buckle at all, it is perfectly matched in function to a computer programmer and wearing a watch all day. I do feel that it exists, but the thickness is very much not noticeable as you rest your wrist on my wrist rest. 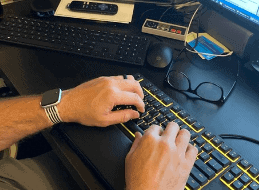 Note that I have seen reviews that say it wears out quickly (and I have tried to start out being careful not to stretch it out too much), but I have had it for a little over a week and it feels very nice, and could even be happy if it stretched out just a few millimeters* more. 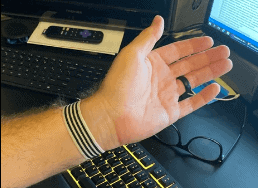 * No, I am not giving up my Imperial measurements for good, but when working with very small measurements, they just feel better in metric!