A feature I have never actually used professionally is filestream and filetable. We have a few file based solutions, but they are all packaged solutions. It is a feature that has intrigued me since it was released, but it has never been a fit for the kind of work I typically do (mostly transactions and data warehousing.) I have played with it some, but recently I started using it personally for a hobby I have that uses lots of image files. Currently I have about 2100 curated files in a directory, but my goal is to load a lot more files eventually.

A couple of years ago, I started posting pictures of Disney and Dollywood on a couple of Twitter accounts (@disneypicaday and @dollywoodp). When I started out, it was easy. Just grab a picture and write some cute, marketing sounding, comment…press tweet. After a while, it became a pain to keep up with what I had posted about so I made a database and several folders for pictures: new, posted pictures, special occasions, etc. Fast forward a year, and that solution was increasingly a pain to keep straight what pictures I had used, and I had a bunch of special occasions (FollowFriday, ThrowbackThursday, Christmas, Halloween, for example, that I was also trying to manage). As I was writing my database design book over the past year, I was revising the large object section, I realized I needed to try to use the filetable feature to take my picture database to the next level and put my pictures files into SQL Server. Being able to query with T-SQL to see the pictures I have used, and what pictures I still had available to post, and randomly return a few to post, would reduce the amount of “paperwork” that goes along with the tasks, and make more of the task creative.

As I said, I already had a database created to help pick what to post about, but keeping pictures organized was a mess. In this blog I want to show the basis of the filetable object that I have utilized that probably any photographer (even just a family photographer) might want to make use of. The code for the entire project is located here: https://github.com/drsqlgithub/TwitterManager and is still definitely a work in progress though it gets the job done well enough.

The first decision I had to make was how to get picture metadata into SQL Server. You don’t really get access to file metadata like tags from the filetable structure in SQL Server, so I landed on using a naming standard to transmit metadata:

Say I want to find a picture of Cinderella Castle, I have defined a tag “CinderellaCastle” that I could previously find in file explorer easily. (Using the search box in File Explorer without wildcards it will find values in values between _ or spaces. So it it would find Cinder, but not Castle. With wildcards, you could find Castle using *Castle*). Searching File Explorer is still important to me, as I want to keep a copy of the files outside of SQL Server for when I need them on my phone or tablet. But the real power of having them in SQL Server is that I can parse the file name and put these values into a proper database.

For example, filenames could be:

Searching in File Explorer for CinderellaCastle would get both attractions, and I could search for ViewOtherAsset to see all of the assets where you can see another asset from it. In essence, the tagging process should be the hardest part of the process (and one day I will start to explore machine learning and see if I can auto-tag pictures, but that is WAY beyond what I am good at right now!)

Note: I am going to assume you have your server configured for filestream and access set up for filetables. If not, see this Microsoft Docs page (https://docs.microsoft.com/en-us/sql/relational-databases/blob/enable-the-prerequisites-for-filetable). I will use non-transactional access, using a 2019 Express Edition SQL Server, perfect for a single user hobby database. (As I refine the code, I will be configuring it for proper concurrency, in case anyone else wishes to use the project.)

To start, I will create a database with filestream:

Now, I will create the filetables I will use to hold the picture files, as well as one to hold pictures that have been searched for (this is a very cheap, but effective user interface!):

To get the process started,  I will load a few files into this database. This is as easy as going to windows and dragging files in using File Explorer from my local file folders. I will just load in 12 pictures to make this simple:

You may get a message about whether or not to copy the files without its properties. I was not using any of the properties from the image, so I said to allow it. Even after copying, the file had the details I typically care about, Date taken, dimensions, camera maker and model (helps me to know if I took the picture, or if it was mixed in and saved from online, but I post pictures I take, even if they aren’t always perfect!)

In Windows, the directory looks like any other Windows folder:

And in SQL, it looks like any other table object with a large binary value, with the fixed structure of a filetable:

Even with just 12 files (and especially in my live “prod” db, with just over 2000 rows, it is noticeably slow to query the filetable object using SELECT *, but if you don’t include the binary column (file_stream, which in my case is 1-5MB each), it is extremely fast.

To make sense out of the name column, I will build the following view object to query the metadata. It uses a function I built to mimic functionality in other RDBMSs that will pull a value out of a string called SPLIT_PART. I do this using a function I wrote Tools.String$SplitPart (which you can find here on Github along with the numbers table I use as part of the process). The interface is:

Using that object, this is the code of the view object:

Query this view, and the output looks like this:

Using this metadata, I use it to load a database and use it to pick pictures. The database and a picture of the model, along with my most recent check-in from Red-Gate Source Control is here if you are interested. In the full version of the database, the tags are parse and normalized to their own table, naturally.

Just using this basic view object, I created a stored procedure object to let me do some quick random searches.

Now I can execute the procedure to give 5 random pictures::

Go to the directory, and refresh, you see 5 files: 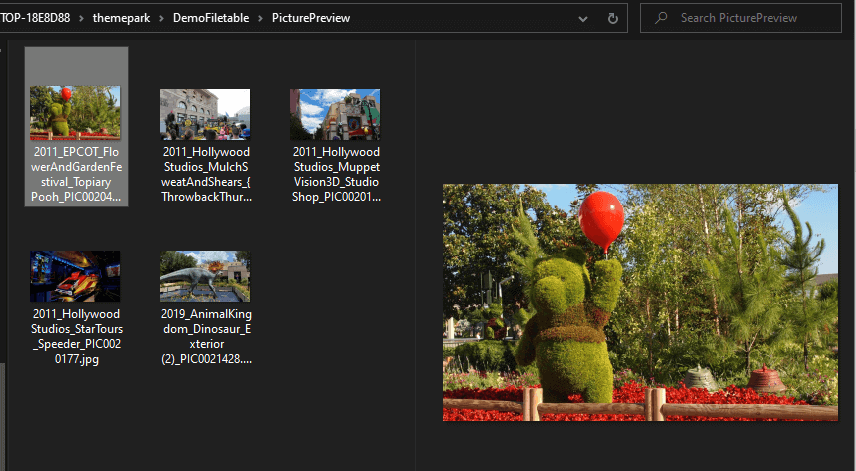 Execute it again,  and you will see a different set of files. Nothing has changed in the Pictures directory or FileAssets.Picture table, so you can do what you want with these files without concern for your source data. Or using the other parameters, you can get random pictures of something specific, like my favorite roller coaster: 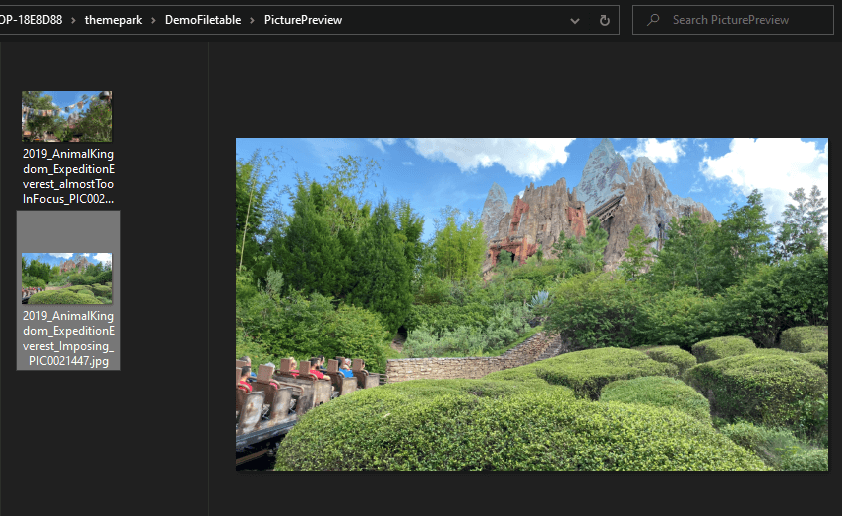 Now, my pictures are very manageable and searchable using SQL Server. The fact that the names are very standardized also helps me with searching the names in a file folder (I copy all of the files from the share into a Dropbox folder so I have access to the files everywhere I am as well.)

And additional cool thing is that even on my Express Edition local server, the filetable data is backed up with the database, so when I backup the database, it backs up my pictures in addition to the textual data. That extra backup, along with the copy of the files in Dropbox give me extra relief that I have a decent backup if something gets corrupted.

With just a little bit of configuration, and a little bit of code, I have a simple database of my images that I can search using T-SQL in a manner that is a lot more powerful that what I can reasonably do using File Explorer, along with the ability to keep history of how the pictures are used. This would be very useful for any photographer with a stock of pictures that they want to search and keep history of, even if it is just baby pictures…of the puppy.

0 2
Despite my recent job change from full time T-SQL code jockey/architect to website editor for Simple-Talk, I will always be at heart at T-SQL programmer. While I will mostly be writing professionally in the foreseeable future will in support of an article, I will also continue writing code for several databases that I use for … Read more
0 2