ConditionalWeakTable and dynamic properties in .NET 4+

In version 4.0 of the .NET Framework, Microsoft added a new class to the System.Runtime.CompilerServices namespace: ConditionalWeakTable<TKey, TValue>. On the surface, this looks like a straightforward dictionary class – it allows you to look up instances ofTValue by instances of TKey. But we’ve already got Dictionary<TKey, TValue>, so what’s special about this new type?

Before we answer that, it’s worth taking a brief detour into static vs dynamic languages. In a static language like C#, when you define a class, its properties and fields (and methods, excepting extension methods) are all fixed at compile-time; accessing a field or property that does not exist on an object is a compile error.

(aside: I’m aware that if you gather n developers in a room, there will be n+1 opinions about what constitutes a ‘static’ versus a ‘dynamic’ lanaguage; I’m using the words ‘static’ and ‘dynamic’ as a convenience here, not arguing for a definitive interpretation)

However, in a language like Python or Ruby, objects are dynamic at runtime – that is, classes are not fixed at compile-time, and objects can have members added and removed at runtime. Below is an example in Python:

Here, we declared a class with no members (or ‘attributes’ in Python terminology), created an instance of it, and then assigned something to the myValue attribute. This attribute did not have to be forward-declared anywhere: just accessing it is enough to bring it into existence. This works because Python objects are implemented as dictionaries – when you access a field on the object, it’s essentially syntactic sugar for accessing a special dictionary:

There are a number of situations where it might be useful to have this kind of behaviour – the ability to add properties to objects at runtime. For example, when building dynamic data structures from a self-describing data format like XML or JSON. Or, when building support for a language like Python or Ruby on top of the CLR. More concretely, attached properties in WPF require something very similar in order that they can be attached to an arbitrary object.

The downside of ExpandoObject is that it is sealed: it’s not possible to inherit from it to create a class that has some compile-time defined behaviour that can also have arbitrary data attached to it at run-time. This is fine if you’re building a dynamic data structure (when parsing XML, for example), but isn’t so useful if you want to attach data to an existing class, as you might when implementing something like WPF attached properties.

One way to achieve this might be to use a static dictionary – here we can conceptually ‘attach’ an ExpandoObject to any other object to give it a set of runtime properties:

We could be even smarter about this and use an extension method:

The problem with this approach, though, is that as soon as an object is added to a Dictionary, as either a key or a value, that Dictionary takes a strong reference to it, and so the object’s lifetime is now tied to that of the Dictionary – and, in this case, the lifetime of the MyClass we originally assigned to b is now determined by the lifetime of DynamicProperties.PropertyDict, unless we remember to manually remove it once we’re finished with b.

This is obviously not ideal: if this was, say, a WPF control or dialog with an attached property, we would leak both the control or dialog and the attached dynamic object every time we used this pattern unless we also remember to manually remove it from the Dictionary. And this is where ConditionalWeakTable comes in.

ConditionalWeakTable<TKey, TValue> solves the problem of Dictionary highlighted above by not holding a reference to the TKey objects; rather, it holds a table of special key-value pairs. These key-value pairs, called DependentHandles internally, hold a strong reference from the key to the value, but do not hold a strong reference to the key – the key is not kept alive by the ConditionalWeakTable, unlike a Dictionary.

The upshot of this is that the value is only held alive by they key, and when the key is garbage collected, the value is too (assuming nothing else holds a reference to it). So, given the following class definitions:

and the following setup code:

If we set second to null and do a GC.Collect(), the ConditionalWeakTable will keep the MyClass2 instance alive, as we’d expect from a normal dictionary:

However, if we now set first to null and then GC.Collect(), this will mean that the MyClass2 instance is no longer being held alive, we will see both the MyClass2 and the MyClass instance collected and finalized:

You might be wondering how this is done – surely if the ConditionalWeakTable somehow ‘knows about’ the keys and values, it must have a reference to them? The answer is that it cheats – the internal DependentHandle class is an implementation of a structure known as an ephemeron – a structure designed to solve exactly this problem in garbage-collected systems. It is implemented at the CLR level to allow precisely this kind of behaviour, which would otherwise be impossible – the source code for ConditionalWeakTable and DependentHandle are available if you’d like to dig into this further.

Because ConditionalWeakTables depend on support from the CLR, they also require special-case support from profiling tools. Without this support, objects kept alive only through ConditionalWeakTables would show as having no path to the Garbage Collection root – for the example above, after second has been set to null, we would see the following in instance retention graph in ANTS Memory Profiler:

This is obviously not true – but the normal reference data we get back from the .NET profiling interfaces don’t include data from ConditionalWeakTables. Fortunately, Microsoft have provided a profiling interface ( ICorProfilerCallback5) to allow us to discover references held through ConditionalWeakTables, and so as of the latest version of ANTS Memory Profiler, this data is combined with the normal reference data, and so what we see is: 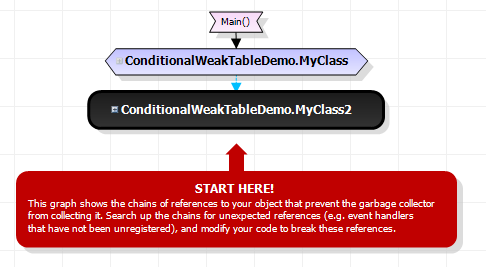 The dashed light-blue arrow from MyClass to MyClass2 indicates that this reference is held in a ConditionalWeakTable rather than being a ‘normal’ strong reference.

ConditionalWeakTable lives in the System.Runtime.CompilerServices namespace, and the MSDN documentation talks about it being useful to compiler writers implementing dynamic languages on the .NET runtime. However, as discussed above they are also useful in a number of other circumstances – and indeed are used in a number of places in the .NET Framework, including in WPF for attached properties and weak events (forgetting to detach events being another common source of memory leaks). Like WeakReference, they’re not a panacaea for all memory problems in .NET but, used carefully and in specific circumstances, they can be a useful addition to a developer’s toolkit.

View all articles by Chris Whitworth