Phil Factor explains how to use SQL Prompt, or SQL Change Automation, to detect use of deprecated SQL Server syntax, during development, and Dynamic Management Views and Extended Events to track its use on working databases.

SQL Server is an evolving product, tugged in many different directions by the demands of its users. Just as the new is introduced, so old features and syntax must go. This is hard for applications that span a range of installed SQL Servers, ranging from 2005 upwards. The advice from Microsoft is to avoid deprecated features, just so they can be removed in a future version of SQL Server, at the point where the effort of maintaining the feature becomes a burden. There are two different severities of deprecation. Firstly, there is deprecation_announcement, where the feature is added to the ‘deprecated’ list, and then the deprecation_final_support, where the deprecation is imminent in the next release.

How seriously you take warnings about deprecation depends on many factors, so there are no hard and fast rules. Redgate sometimes has to continue to use features announced as deprecated, just so a wider range of SQL Server releases can be spanned by a tool. However, there is always a point where the current alternative needs to be used instead. It is good to be reminded of an imminent problem, but the decision depends on your application.

Checking for use of deprecated syntax during development

Checking for use of deprecated syntax on a working database

In addition to this, you can easily check if deprecated syntax is being used in a working database with:

Which, in my case produces the rather shaming … 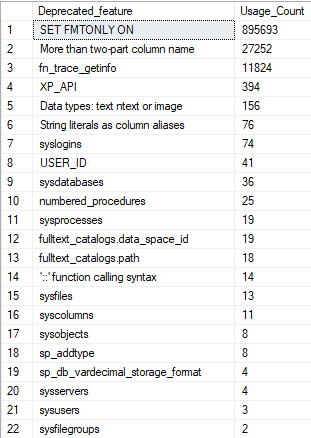 This lists all deprecated features that have been encountered since SQL Server last started, along with the number of times each item has been encountered. There are two hundred and fifty-three of these deprecated features in SQL Server 2016 & 2017, mainly because it lists every deprecated system view, system stored procedure and system function separately, and lists deprecated collations too. A useful summary is provided in the documentation for the SQL Server, Deprecated Features Object which does its best to provide an alternative for each type.

This gives you a good overview, but what if you want to know what database is doing this? What user is executing this antiquated syntax? What is the SQL being executed? It is time to put on the PPE and get stuck into an Extended Events session.

When I created this, I just used the Extended events wizard to generate the create statement. As well as the data about the two relevant events deprecation_announcement (features whose deprecation has been announced) and deprecation_final_support (features whose deprecation is imminent), I want to know about the database name, SQL username, NT username, and the actual SQL Text. These are all classed as actions, in extended events, rather than event data. I’ll just put the data into a ring buffer because I don’t need anything more permanent.

Once we’ve got this working, we can see the events flowing in by choosing ‘Watch Live Data’ from the right-click context menu of the browser pane for the event session you’ve just created. 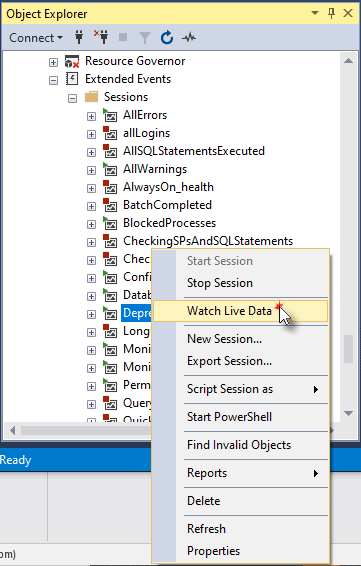 You will see something like this. In my case, Redgate’s SQL Monitor was one of the critters unlucky enough to be caught in the headlamps. 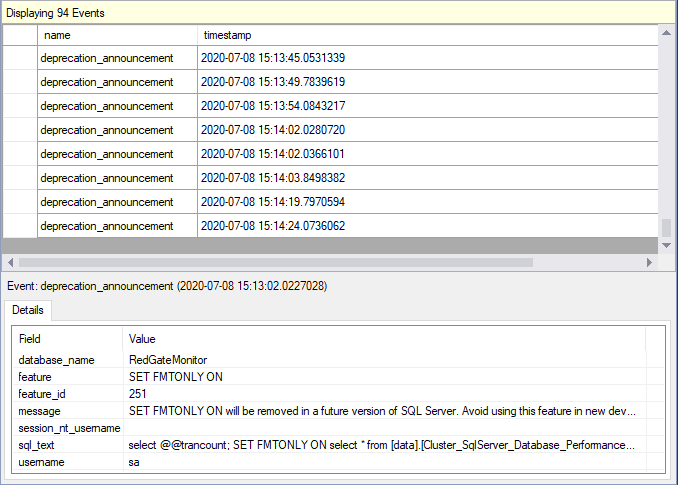 Who and what is using the deprecated syntax?

So now that we have the event session working to our satisfaction, we can devise the SQL Query that will drill into the detail or generate reports.

You can, of course, get a report of how often each event is happening with this

If you are using deprecated features of SQL Server, that’s fine, as long as you are aware of the issues such as the maintenance repercussions. I like to use old-fashioned T-SQL defaults and rules myself, so I’m no saint. If you do so, it is wise to be able to track them both in development (SQL Prompt), and during the build (SCA). You can then go on to track them in the live database, either from using performance counters or, for the details, extended events. This last method is excellent when preparing a database to be run on a new version of SQL Server, because you get to see the SQL where it is being used.