Virtualization is a hot topic these days. Microsoft has released Windows Server 2008 Hyper-V just before the summer and Hyper-V is Microsoft’s answer to the supremacy of VMware ESX Server. Customers have been running applications like Microsoft Exchange Server on VMware for years now, despite the formal support statement from Microsoft that this wasn’t supported. Okay, there was a “commercially reasonable effort” support, but that was basically it.

This has changed since Hyper-V was released. All server virtualization products that are validated in the SVVP (Server Virtualization Validation Program) are now fully supported by Microsoft. Needless to say that all major virtualization vendors have signed up in this program, so all recommendations regarding virtualization are not only valid for Hyper-V but for all vendors in the SVVP program.

Microsoft has a list of all Microsoft applications that are supported in a Virtual Machine, this list is published via kb article 957006 (kb article 957006). There are some remarks in this document, and one of them is for running Exchange Server in a virtualized environment. And that’s exactly what I want to talk about.

Note. The official Support Policies and Recommendations for running a virtualized Exchange server can be found here:

Hyper-V is a hypervisor product. A Hypervisor is a very small software layer that’s situated between the Operating System and the hardware. In terms of “small”, Hyper-V is less than 1 MB in size.

Install Windows Server 2008 (X64 only!) on “Designed for Windows” hardware. Make sure that this hardware supports hardware virtualization and have a correct BIOS version (including the Execute Bit Disabled option). All Class-A servers should be capable for Hyper-V, but be careful with the low-end servers. I have seen budget servers with Pentium IV processors that are not capable of running Hyper-V! But I have also seen laptops with for example an Intel Core2Duo processor that are capable of running Hyper-V (don’t expect a real-world performance though). The server should have enough internal memory and disk space to facilitate the use of Virtual Machines.

After installing Windows Server 2008 you have to install Hyper-V. Hyper-V is a server role and can be installed using the Server Manager. The Hypervisor slides between the Operating System and the hardware, and after a reboot the system is ready. Note that the original Operating System has now become a Virtual Machine as well! This Virtual Machine is called the root or parent partition. This is a special partition since it controls all other Virtual Machines on this host. These VM’s are called child partitions. Special care should be taken for the parent partition, and no applications should be installed on it. The best solution for the parent partition is to use Windows Server 2008 Server Core which only has a command line interface. There are a few graphical tools like timedate.cpl for setting the timezone and time/date information, and there’s also Notepad for creating batch files. But the general interface in the command line. Windows Server 2008 Server Core has low overhead, it has a small memory footprint and it has a small attack surface. It is more difficult to manage though, especially for the average Windows administrator.

There are some additions to the host Operating System when Hyper-V is installed. A VSP (Virtual Service Provider) is installed. This is a piece of software that gives a Virtual Machine access to hardware resources. The VSP is connected to the VMBus, an in-memory bus used for communications between parent and child partitions. Every child partition has its own VMBus for safety reasons.

Other operating system run very well in Hyper-V as well, but they use the hardware emulation instead of the new VMBus structure. 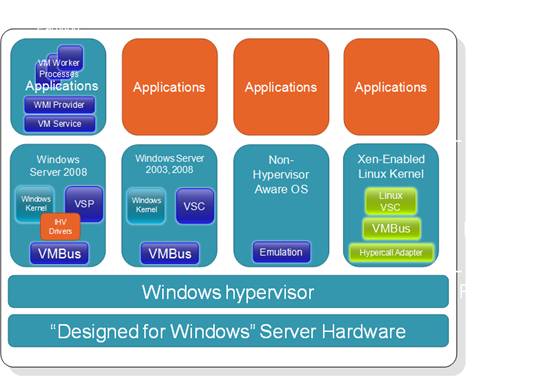 That being said, we want to create a fully supported virtualized Exchange Server environment. As stated before, the official support policies can be found on the Microsoft website:

An Exchange Server 2007 running under Hyper-V can look something like this: 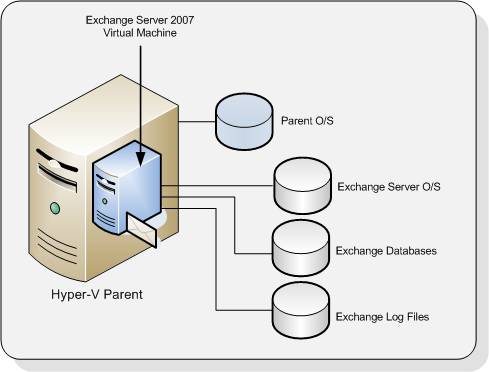 Before installing Windows Server 2008 as the child partition, a Virtual Hard Disk must be created. This can be fixed size Virtual Hard Disk (.VHD file), remember that dynamic .VHD files are not supported for Exchange Server 2007 SP1. A better solution is to use a dedicated or pass-through disk. This is a dedicated disk that can only be used by the Virtual Machine. Tests have shown that a dedicated disk under Hyper-V has a similar performance characteristic as a native disk in a non-virtualized Exchange Server.

First bring the 2nd physical disk offline, you can do this in the Disk Management option under Storage in Server Manager. By placing it offline it is not available anymore for other operating systems. 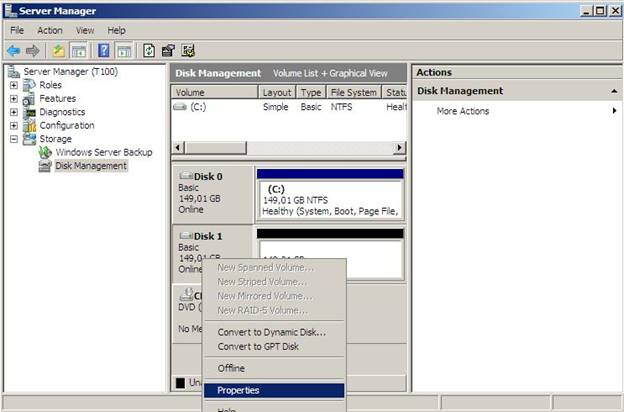 Figure 3. Bring the disk in offline mode in Server Manager

Do not start the Virtual Machine at this point.

When finished open the properties of the Virtual Machine and go to the IDE Controller 0. This is the controller where the boot disk should be attached to.  Check the “Physical Hard disk” option and select the physical disk we’ve put offline earlier. Click OK to save the configuration.

Unfortunately it is not possible to add a SCSI controller and the disk to this SCSI controller. The Hyper-V SCSI controller is part of the Integration Components and thus runs against the VMBus structure. A very flexible solution, but only available when the Virtual Machine is up-and-running. 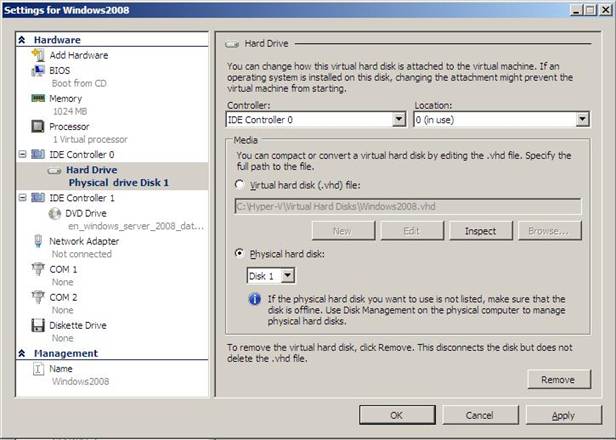 Figure 4. Add the physical drive to the IDE Controller 0

The new Virtual Machine is now ready to be installed, just power it on and install Windows Server 2008.

After installing and configuring the server the server needs to be updated. The RTM version of Windows Server 2008 comes with a beta version of Hyper-V and this needs to be updated as soon as possible. When updating the Virtual Machine make sure that you install Microsoft hotfix kb950500, this hotfix brings the Virtual Machine to the RTM level of Hyper-V and thus includes the latest version of the Integration Components.

After the Installation Components are installed and the server is brought up-to-date we have a fully functional Windows Server 2008 server. Assuming that you already have an Active Directory available on your network you can continue installing Exchange Server 2007 SP1.

An Exchange server running on a server virtualization platform doesn’t differ from a bare metal Exchange server and as such you need to place the Exchange database and the log files on separate spindles. This is both from a performance perspective as well as a disaster recovery perspective.

There are three ways to configure the database and the log files:

Use a fixed Virtual Hard Disk – This is a pre configured .VHD file with a fixed size placed on a separate disk;

Use iSCSI LUN’s – using the Windows Server built-in iSCSI initiator we can access LUN’s on a storage device and place the database and log files on separate LUNs. Although using iSCSI within the Virtual Machine is a fully supported configuration the performance is less than exposing an iSCSI LUN from the parent partition as a dedicated disk. This is due to the networking overhead within the child partition.

It is not yet possible to use a fiber channel solution with Virtual Machines natively. The HBA’s (Host Based Adapter) are not yet available for use with the VMBus structure. HBA vendors are working on this however, but it is unknown yet (as of October 2008) when this will be available. It is possible however to use a fiber channel solution on the host system and expose LUN’s on a SAN as disks that can be used using the pass through mechanism.

Figure  5. Creating a Hyper-V VSS backup does interact with the Exchange server running in the Virtual Machine

Although it is fully-functional, it is not a very user friendly solution. Microsoft is also offering a complete backup solution, Microsoft System Center Data Protection Manager (DPM) 2007. With the upcoming service pack 1 release of DPM Microsoft is going to support VSS backups of Virtual Machines. The expected release of DPM 2007 service pack 1 is in the first quarter of 2009. 3rd party vendors like Symantec offer VSS backups of both Hyper-V as well as VMware Virtual Machines in BackupExec 12.5 which was released early October 2008.

The following takes place during a snapshot:

While this is a great technology to return to a known state at a certain point in time it is not supported for running Exchange Server 2007 SP1 in a production environment.

Although not officially supported, Exchange Server 2003 runs great in a Virtual Machine under Hyper-V.

Microsoft now supports running Exchange Server 2007 in server virtualization environments. This is not only Hyper-V, but all vendors that have their solution validated in the Server Virtualization Validation Program (SVVP) are fully supported.

Important to remember is that all design guidelines that are valid for a bare metal Exchange environment need to be used for a virtualized environment as well. Use disks that are capable of handling the expected IO load, it is very likely that dynamic disks will not meet these requirements. Therefore the use of dynamic disks is not officially supported by Microsoft when running Exchange Server 2007 SP1 under Hyper-V.

One should always take the business requirements into account, why do you want to virtualize and what are the project goals against which costs? I have seen customers returning from the virtualization twilight zone being very frustrated and ending up in a bare metal environment. For larger environments I have seen a lot of large implementations where the Exchange Server 2007 Client Access Servers and Hub Transport Servers were running under VMware, but where the mailbox servers were running on bare metal. I have to admit though that these environment were larger than 4000 mailboxes. For these environments virtualizing the mailbox servers is questionable, but this might change in the future and this is something that is hard to foresee.