Microsoft has introduced an installation option of Windows Server 2016 that provides an operating system designed and optimized for Cloud operations. Microsoft's Nano Server is intended to support and run born-in-the-cloud applications and containers. In this article, Nicolas Prigent explains how to easily and quickly deploy Nano Servers in your server environment, using either PowerShell or a GUI.

Nowadays, IT personnel spend a lot of time on repetitive tasks to accomplish various jobs such as:

I believe that one of the best ways of avoiding this type of repetitive job is to be able to automate most of your day-to-day tasks. A big advantage of automation is to be able to simultaneously execute administration tasks in order to optimize the use of your time. Another advantage is to be able to quickly and easily reproduce tasks. In a world of work that requires maximum efficiency, datacenter administrators simply don’t have the time to configure and deploy servers individually. So, the more your tasks are automated, the more time that you will save.

As you probably know, Microsoft has released Windows Server 2016 which offer a new installation option called “Nano Server” which has been designed as a server dedicated for Cloud operations. Installing this seems like a potentially repetitive task that could be automated!

What is Nano Server?

How to deploy Nano Server?

Significantly, Nano Server is part of the full ISO image of Windows Server 2016. You can’t download Nano Server as a single ISO image.

So after downloading and extracting Windows Server 2016, you will notice a folder called “Nano Server” which contain “NanoServer.Wim”. The WIM image will let you build your own Nano Server.

Once the installation is done, you must choose if you want to create a new Nano Server image or a bootable USB media. 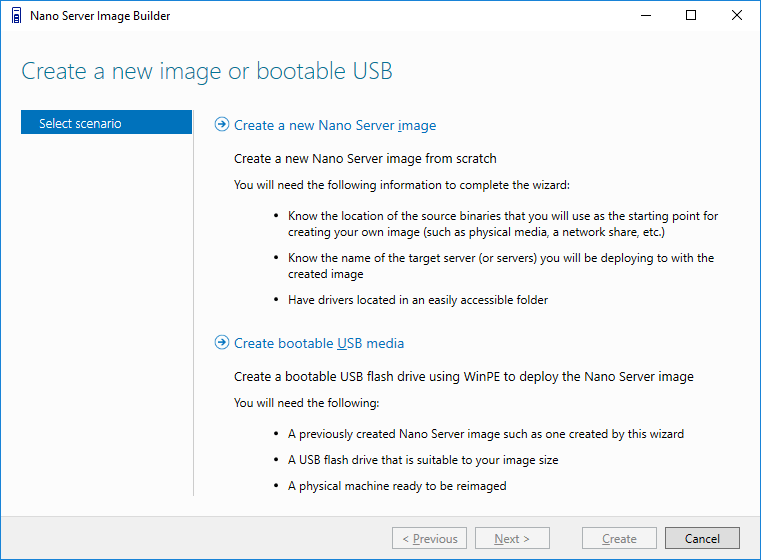 Next, you must select the installation media that you need. The Nano Server Image Builder needs the Windows Server 2016 OS files to build a custom image. You must point to a valid location for your media source. It can be the ISO file itself. A valid location must contain a “NanoServer” folder. Next, you must select the type of machine the image will be deploy to. In this case, I will choose a Virtual Machine Image: 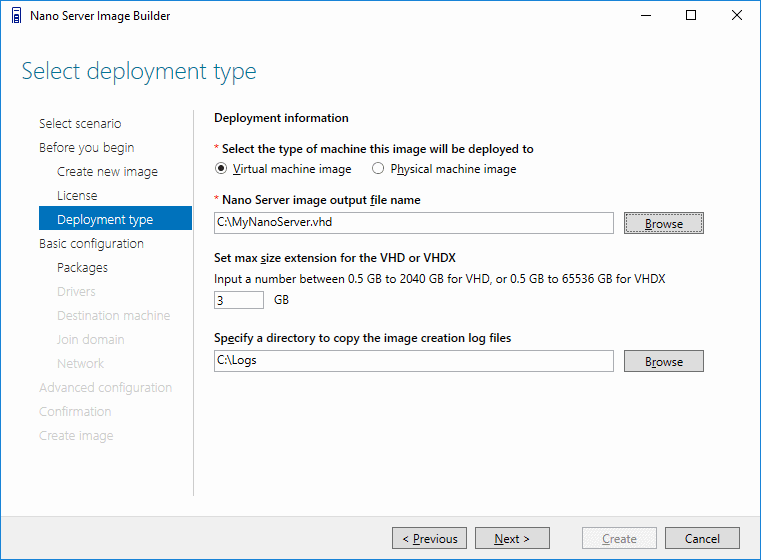 The next part is more interesting because you can customize your Nano Server Image by selecting the Nano Server Edition. Depending the edition, you can add some optional packages such as: 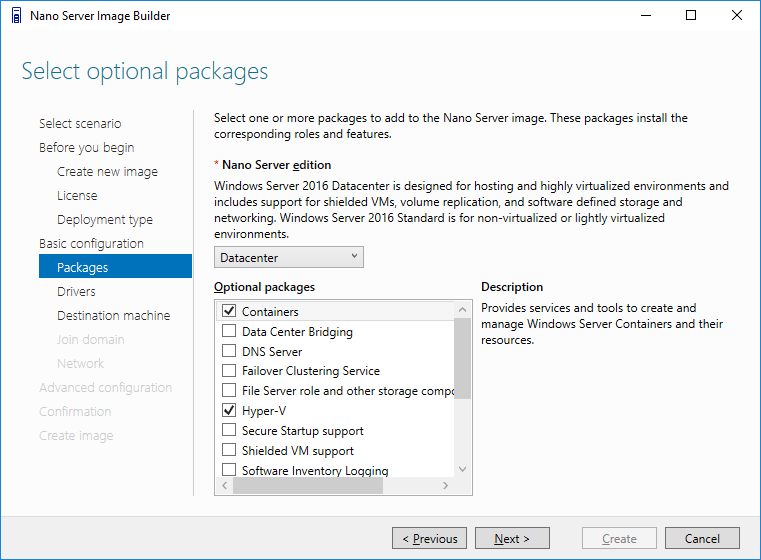 Note that the Virtual Machine integration components for Hyper-V have been selected automatically. Finally, you can configure the computer name, the time zone and the network.

Nano Server Image Builder will create your VHD or VHDX file. You then just have to import this into your Hyper-V manager console. Select “Quick Create” and point to the VHD file previously created:

The GUI is great for performing a manual deployment task, but you will soon be very likely to need to deploy many Nano Servers. In order to automate the provisioning process, there is a PowerShell module called “Nano Server Image Generator” which lets you create your VHD file using the command-line. Let’s see how to use it.

Firstly, you need to import the module which is located inside the “NanoServerImageGenerator” folder:

There are three cmdlets at your disposal.

If you need some additional help, you can use the Get-Help cmdlet followed by one of these cmdlets.

Let’s see how to create a basic Nano Server image. Below is an example:

In the above example, the command will create a Virtual Machine Nano Server image using the -DeploymentType parameter. Two values are possible:

We create a Datacenter edition with the -Edition parameter. It will have the clustering feature added, support for a shielded VM using the -Package parameter, and support for remote management over WinRM will be enabled. Finally, the administrator password will need to be a secure string variable which you can easily convert from a plain-text password.

Note that some of the more popular server features have their own switches such as “clustering” but these can also be added with the -Package parameter.

The first thing that this cmdlet will perform is mounting the VHD file. Then the VHD file will be updated and dismounted once the modifications are done.

If you are wondering how to find all the available parameters? Well, we will use the Show-Command cmdlet to show you how easy it is to deploy your Nano Server using the New-NanoServerImage cmdlet.

Building a new Nano Server has been made easier with the Show-Command cmdlet from PowerShell 5.0:

Here is a screenshot of the GUI: 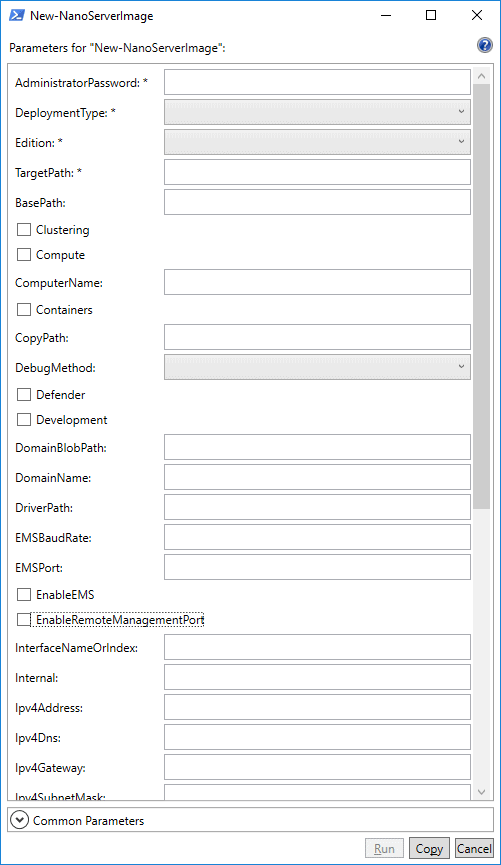 Enter all your values, select which parameters you need, and click “Copy” to get the PowerShell command ready to be used!

Nano Server as a Container base OS Image

Microsoft announced in mid-June the future direction for Nano Server by publishing the announcement of the forthcoming feature update (1709) https://docs.microsoft.com/en-us/windows-server/get-started/nano-in-semi-annual-channel. Microsoft has refocused Windows Server 2016 Core and Desktop as its primary bare metal, while Nano is now focused on containers. It means that Nano Server will be available only as a container-based OS image.

You will must run it as a container in a container host. Running a container based on Nano Server in the new feature release differs from earlier releases in these ways:

It means that you must use Nano Server as a Windows Container instead of a Virtual or Physical Machine. We will not dig deep once again into the concept of containers because I’ve already published a series of articles about Containers. Please read this series in order to learn more about how to use Windows Containers: https://www.red-gate.com/simple-talk/sysadmin/virtualization/working-windows-containers-docker-basics/

Here is a brief overview. First, you must pull a NanoServer Container image by running the following command:

Now you can create a new Nano Server container from the image using Docker:

You can now work inside the Nano Server container interactively.

Microsoft has done well with Nano Server but we need more information from Microsoft about the “1709” version. Although described as an improvement, it could actually be a regression because we have plenty of space on Hyper-V hosts, so we are not so worried about its size and the space that the OS takes up. What does make the difference is the patching, because we will need to reboot our Hyper-V hosts 10 times more often because Microsoft forces their customers to use Windows Server Core edition instead of Nano Server edition.

For sure, we must keep a close eye on future releases of Nano Server to see what features Microsoft removes, and also what functionality they decide to implement. We will have to wait and see what the future release brings.

0 18
On both Windows and Linux, the chore of setting up developer workstations can take several days, and there always seem to be a few configuration settings that get missed. You can reduce the time and tedium dramatically by automating the process by using Vagrant to set up the operating system, followed by your choice of provisioning, configuration management and orchestration applications such as Puppet, Chef, Ansible, Salt, Docker, Chocolatey and Boxstarter. Vishwas shows how to make it easy to do with Vagrant, Chocolatey and Boxstarter.… Read more
0 18