The offline address-book (OAB) of Exchange is available when the user is not connected, Since Exchange 2007, it is updated via a Web-based distribution point. But what if you need to set up several Offline address-books for a variety of sites or geographical regions, each to be distributed by a different point? How would you do that? Krishna demonstrates.

The offline address-book (OAB) is a copy of the Exchange address book that the user can download via their Outlook client. It is mainly used to allow access to the address book when the user is disconnected from the network or is in cached mode.

The OAB has evolved somewhat, and is now in OAB Version 4. This version was introduced in Exchange 2003 SP2 and is still used by Exchange 2007 and Exchange 2010.

How Outlook downloads the OAB to its client machine

The first Mailbox Server in the Exchange organization is identified by default as the OAB Generation Server (this assignment is often moved to a different server after installation).

The OABGen service running on the mailbox server helps to generate, creates and updates the OAB files. The OABGen service is part of the System Attendant Service. All OAB files generated for web-based distribution will be, by default, located at the path “\Program Files\Microsoft\Exchange Server\V14\ExchangeOAB” on the server. OABGen communicates with the Active Directory, and generates the address book with all the mailboxes, contacts and other exchange resources in the Exchange organization into the default OAB. There can be only one default OAB in the Exchange organization. OABGen generates address book for all the OAB defined in the organization. You can have multiple OAB defined with specific configuration based on the requirement. The OAB in the mailbox server are written to a compressed file with the extension .LZX.

OAB files are generated in Exchange 2010 Mailbox servers, but Outlook does not connect directly to the mailbox servers. Instead, the Client Access Server role is used with web-based distribution. On every server running the Client Access Server Role, a virtual directory called OAB, inside IIS under the Default website. This virtual directory helps in distributing the OAB.

The OAB virtual directory gets the OAB data files from the mailbox server by using Microsoft Exchange File Distribution Service running on the Client access Server. The Microsoft Exchange File Distribution Servers poll the OABGen Server and copies the OAB data from the mailbox servers to the Client Access Server (CAS).  Once the complete OAB data is copied, then it is subsequently kept up to date by synchronization with the CAS server. The synchronization or poll frequency is 8 hours by default, but you can change it if required using PowerShell cmdlet or Exchange console.

Outlook clients use the web https URL of the web distribution point, provided by the autodiscover, to download the OAB into the local computer.

Creating and configuring a new offline address-book for a region

In the example configuration in this chart below, we have an Active Directory (AD) site “India” and will be creating a new OAB, towards which we’ll point all the web distribution points.

We can create and manage offline address books (OAB) using PowerShell cmdlets. To create a new Offline address book, use the cmdlet New-Offlineaddressbook. In Figure 1, the cmdlet creates a new OAB “India – OAB” on a Mailbox server “KEXCHMHC01â³ and it also adds default global address list into the OAB. You’ll see the execution result of New–Offlineaddressbook cmdlet. Its throws the warning “OAB needs further configuration and users will not be able to download offline address book”. At the moment OAB is not configured for web distribution or public folder distribution, so this can be ignored at the moment.

Now that we’ve created a new OAB “India – OAB”, let’s configure it with web-distribution points. Before we configure it, we need to get the list of all the web distribution servers for India region/AD site. In the code below, the cmdlet queries for a list of all the Client Access(web distribution servers) in the India AD site and assigns the result to the variable $IndiaCasServers. Figure 2 has the execution summary of the same:

Figure 2. Get the list of all the Web distribution servers in India AD site

Now we create the list of the OAB virtual directory from the CAS server list $IndiaCasservers into the array $result:

Figure 3. Get the list of OAB Virtual directory for all the CAS Servers

It’s now time to configure the CAS server’s OAB Virtual directories with the Offline address book. This will also enable to OAB for web distribution. Below is an example of using the Set-OfflineAddressbook cmdlet and Figure 4 shows the execution result.

Let’s check out the properties of the new offline address book and you should be able to see WebdistributionEnabled is set to True and Virtualdirectories is also configured with the CAS server OAB virtual directories, as in Figure 5. The results marked with red shows the values of these. 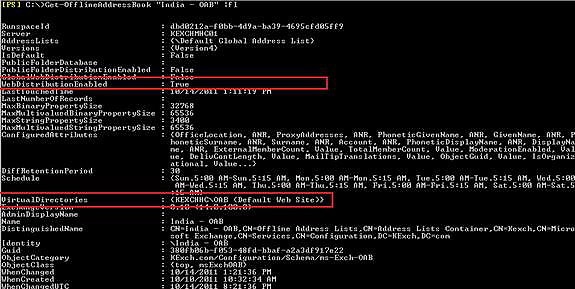 Updating the offline address book is the process to force the update the offline address book immediately. As we just created a new OAB, it has to be updated with all the recipients in the organization. The Update process communicates with the Active directory and gets all the details of contacts. It is normally scheduled to run once per day, and you can change the schedule depending on the size of the OAB and organization requirement.

Below is the PowerShell cmdlet to update “India – OAB” immediately and figure 6. shows the execution details of the same.

The new OAB “India – OAB” has updated itself with the latest information and this information has to be replicated to all the CAS Servers. To force update of the CAS server we need to use the Get-ExchangeServer cmdlet which executes the update-file distribution service on all the CAS servers in the India region/AD site.

As we have successfully created, configured and updated the new OAB. It’s time to configure the mailbox databases with the new OAB. With the below cmdlet we get all the Exchange database in the India region/AD site and configure with the new OAB “India – OAB” and figure 8. shows the execution summary:

Let’s use MS Outlook to see if we can download the new OAB and, at the same time, verify the OAB Distribution point URL.

Access the user mailbox using outlook and click on ‘send/receive’ from the menu and click on ‘Download Address book’. Make sure you are accessing the mailbox that is located in the database which is configured with the OAB (above). Figure 9 shows the screenshot.

You should be able to see MS Outlook downloading the OAB into the local computer.

Outlook OAB file are stored in the default location “\Users\<username>\AppData\Local\Microsoft\Outlook\Offline Address Books” with the extension .oab.

We can always find the path that MS Outlook uses to connect to the CAS and OAL. Right-click the Outlook icon in the System Tray and select ‘Test E-mail AutoConfiguration‘, then click on ‘Test‘ button on the Test E-mail Auto Configuration as shown in the figure 12. OAB URL is the path in the OAB distribution point details. 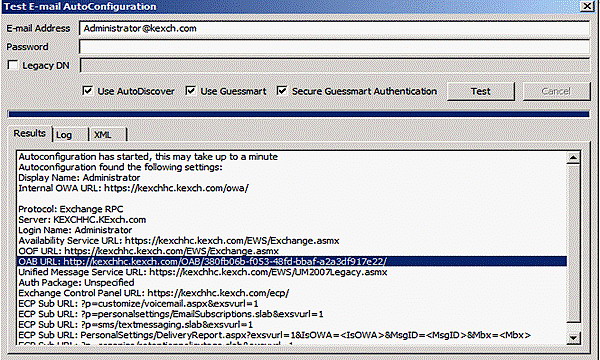 With this we have successfully created and configured a new OAB for a particular region/AD site. If you need OAB for several regions/AD sites, then the same configuration can be replicated with the new name and new set of CAS server from that region/AD site.

Sometimes, the OAB may cause problems and it may not update itself. The most basic troubleshooting step is to rerun the Update-Offlineaddressbook PowerShell cmdlet, restart the file distribution service and try to force the AD replication. You may also try to move OAB to the new server if the server performance is very bad. Move-Offlineaddressbook cmdlet helps to move the OAB to the new Server. I hope you like this article and it helps you in the real time scenario to configuring multiple OAB for various regions.

Krishna Kumar R is from Bangalore - the Silicon city of India - and is working in the Messaging Engineering Team of a leading international Financial Organization. He's been in the technology industry for 8 Years, and in that time has earned himself a Masters degree in Information Technology (Msc IT) and is a Microsoft Certified Technology specialist. He specializes in Exchange, Powershell and VB Script, and is a strong believer in the values of Automation and lateral thinking. Always keen to keep up-to-date with the latest technology, Krishna also maintains a personal blog at smtpport25.wordpress.com, and participates in Tech talks on Exchange and Powershell, as well as contributing in Technical Forums.

View all articles by Krishna Kumar