With economic doom and gloom all around him, Richard Morris decides to seek advice before starting a business. Who better, we suggest, than Ken Blanchard, the relentlessly optimistic purveyor of uplifting materials to the wannabe entrepreneurs, and author of the best-selling 'One Minute Manager'. We sent him of into the rain in his trilby to interview Ken and infuse himself with some get-up-and-go

Like most industries, IT has been hit hard by the worldwide recession; but a number of recent surveys suggest that, even in this economic mire, new technology businesses are booming. IT professionals with strong technical backgrounds are, it seems, thinking of great ideas for start-ups; but admit to lacking the business skills to keep those companies afloat. 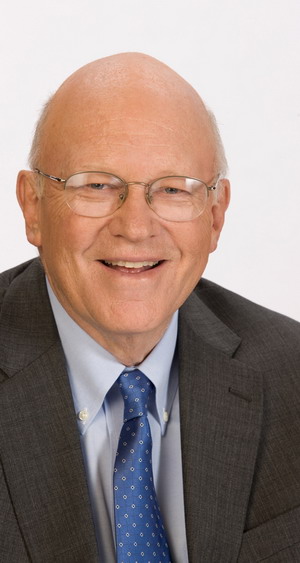 Add in books such as ‘High Five!’ and ‘Gung Ho!’ and you have sales of 13 million plus copies. It’s true to say that Blanchard has probably had more influence on entrepreneurs and managers than any other author.

He comes from the American tradition. He is relentlessly positive and upbeat. There is no room for doubt. ‘We think we are in the human energy business, unleashing the power and potential of people in organisations for the overall good’, is how he describes his business. Depending on your level of cynicism, his work is either simplistic or simply uplifting.

In Blanchard’s world, negativity is cast aside. His outstanding success can be attributed to the straight­forward­ness and universality of his message. ‘The One Minute Entrepreneur: The Secret to Creating and Sustaining a Successful Business’, for example, isn’t a complex book because running a successful business or being a successful human being isn’t complicated, he claims.

So, with assets so cheap, does he think this is a good time to start a business?

‘I always think it’s a good time to start a business any time you have a good idea and you have customers who are willing to pay for you to do it.

‘ My wife, Margie, and I came out to California on sabbatical leave 37 years ago, for one year. We ran into a group called the Young Presidents Organization and they encouraged us to start our own business. I had been a speaker at one of their international universities and made a big hit. They said if we would start our own business they would help support it by giving us opportunities to speak and train in their companies. That was a no-brainer. If you have customers who will pay you to do something, do it.

Don’t quit a paying job to
start a company if you
don’t know whether or
not, when you run your
business up the flag,
anybody will salute it.

‘I always tell people, “Don’t quit a paying job to start a company if you don’t know whether or not, when you run your business up the flag, anybody will salute it.

‘If techies are working full-time it makes it hard to start up a company. The perfect job for a potential entrepreneur is one they can do at half speed and do it well. If they have a job that takes up 70 hours a week, it’s going to be hard for them to be an entrepreneur. You have to free up time so you can think and get advice and test your ideas.

‘But these are the things which separate great minds from their competitors,’ Blanchard says. ‘Entrepreneurs have a clear vision and direction. They know what their values are and key people keep strengthening the values. There is a real joy in forgetting themselves, in working together.’

What about that sure-fire trip to destruction, starting a business ventures with friends ot family. Surely he would counsel people to avoid this at all costs?

‘Our company, The Ken Blanchard Companies, is full of family and friends. My wife’s brother is President of the company, our daughter is very involved in sales, and our son has been working closely in client services and product development. My wife is the head of the Office of the Future and I am the Chief Spiritual Officer. Since we work with family and friends, 15 years ago we hired an outside consultant who had worked with family businesses to come and spend time with us to make sure that no issues were being swept under the carpet. Since then, once every quarter we meet for a minimum of one day with an outside consultant and the five of us that we now call the Family Council. Working with family and friends can be a problem unless you set up a process so that you can deal with issues when they are small rather than letting them get big.’

Blanchard believes that if people are given purpose in their working lives, they, and their organisation, will thrive. He points to Walt Disney, saying he was in the happiness business.

‘He wanted people to have a smile on their face on leaving his theme parks. In reality, it is in the peace of mind business. People want to know that their money is safe and that it will grow. To do this you have to start with the benefit to the customer of your product or service.’

This has to be supported by a set of operating values. Disney’s key value is safety. Blanchard is suspicious of companies which claim to have a profusion of corporate values. Three or four should suffice.

‘Most organisations are run for top management. The sheep are there for the shepherd. People are being paid ridiculous amounts of money while people are losing their jobs. It is an absurd egocentric thing,” he says, pointing to the conclusions of Jim Collins, the leadership researcher in his book Good to Great. ‘Collins found there were two characteristics of great leaders: determination to follow your goal and humility. Wal-Mart’s CEO has a smaller office than his secretary.’

For a man given to exclamation marks, it is something of a surprise that Blanchard regards understated humility as central to leadership. But it is humility with added diversions. Blanchard-style humility comes with a cacophonous sideshow. He is heavily into cheerleading and animal metaphors. His cringingly entitled book Whale Done! links training killer whales with inspiring people: ‘When you’re working with people – just as with whales – accentuating the positive and redirecting the negative are the best tools to increase productivity and don’t stop tithing.

‘I’ll never forget being on a TV programme with Sir John Templeton, the great investment counsellor. He said that the best advice he has given to anyone over the years is to tithe a minimum of ten percent of their income to good causes. He said he has never known anyone who tithed for a minimum of ten years who didn’t have it coming back tenfold. Templeton also went on to say that if all of us would set aside ten percent to tithe, put ten percent in the bank, and live on eighty percent, we would all be a lot better off. I’ll bet there’s a lot of people today in this downturn in the economy who wish they had listened to that kind of good advice.

‘The way for the entrepreneur to stand out is to go for legendary service, which will turn customers into ‘raving fans’.

This aim, he says is ‘a journey, not a destination’. Improving customer service is an ongoing task.

He offers up an acronym to make it understandable – I Care – to describe what is needed. It stands for: Ideal service (meeting the customer’s needs); Culture of service (an environment that serves the customer); Attentiveness (knowing customers and their preferences); Responsiveness (demonstrating a willingness to serve others); Empowerment (taking the initiative). The world of I Care would certainly represent a big improvement on what so many retailers seem to offer: I Don’t Give A Toss.

‘My emphasis is on catching people doing the right thing, creating an environment in which people are cheered on.’