Working with Windows Containers and Docker: The Basics

When you begin to work with containers, you will notice many similarities between a container and a virtual machine; but, in fact, these are two quite different concepts. Containers are going to change the way that we do Windows-based development work in the coming year, and they already underpin much of the devops work of speeding the delivery process. Nicolas Prigent explains how to use the Windows Containers feature.

Windows containers will revolutionize virtualization and the DevOps process.

With Windows Server 2016, Microsoft introduces the new feature called Windows Containers. Organizations that upgrade their servers to this new operating system will then be able to use containers right through from development to the production environment.

Robert Sheldon wrote a great article about Windows containers on Simple Talk: https://www.simple-talk.com/cloud/platform-as-a-service/windows-containers-and-docker/. We will not dig deep once again into the concept of containers, but I will explain in this series how to create, run, convert and manage your Windows Containers.

Before starting with the practical side of Windows Containers, I ought to quickly cover the basics about this new feature.

Containers wrap software up within in a complete file system that contains everything it needs to run: code, runtime, system tools and system libraries. This guarantees that it will always run the same, regardless of the environment it is running within. To achieve this goal, Windows uses namespace isolation, resource control, and process-isolation technologies to restrict the files, network ports, and running processes that each container can access, so that applications running in containers can’t interact or see other applications running in the host OS or in other containers.

A Virtual machine is standalone and has its own operating system, its own applications and its own resources (memory, CPU and so on). The following schema shows three VMs hosted on the same physical host. Each virtual machine uses its own OS, libraries, etc. In consequence, they occupy significant amounts of memory. 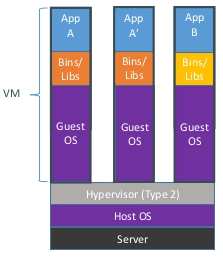 Quite often, developers need to test applications with different versions very quickly. Then they must ask to the IT Ops team to deploy one or many machines (Virtual or Physical): It is a time consuming process. VMs also consume considerable resources such as memory and storage space. That’s the reason why containers are amazingly useful for the DevOps process:

Containers, in contrast, do not contain any operating system, so they take up fewer resources than virtual machines on the physical host. Containers simply share the host operating system, including the kernel and libraries, so they don’t need to boot a full OS.

In summary, the benefits of Windows containers are that:

To finish, the container philosophy is “one service per container”

Please note that Hyper-V containers are only managed by Docker, while Hyper-V Virtual Machines are managed by traditional tools such as Hyper-V Manager. In practice, booting Hyper-V containers takes longer than Windows Server Containers but both are much faster than a VM with a full OS (even on Nano Server).

In October 2014, Microsoft Corp and Docker announced a strategic partnership to bring the agility, portability, and security benefits of the Docker platform to Windows Server.

However, the process of managing Linux and Windows containers are strictly identical. The following schema describe the Docker platform: 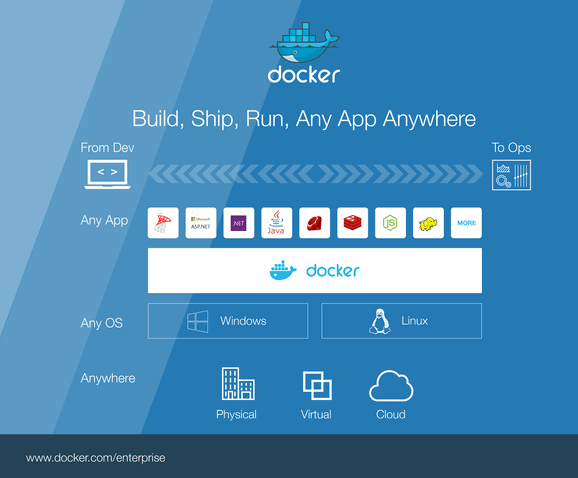 Here is a summary of Windows Containers jargon with their meaning:

Docker provides a central repository called Docker Hub (https://hub.docker.com/), the public containerized-application registry that Docker maintains. Container Images can be published directly on this repository to be shared with the Docker community. There are already many images hosted on the Docker Hub. For example:

You can run a private repository on-premise. Microsoft has its own public and official repository available via this URL: https://hub.docker.com/u/microsoft/ 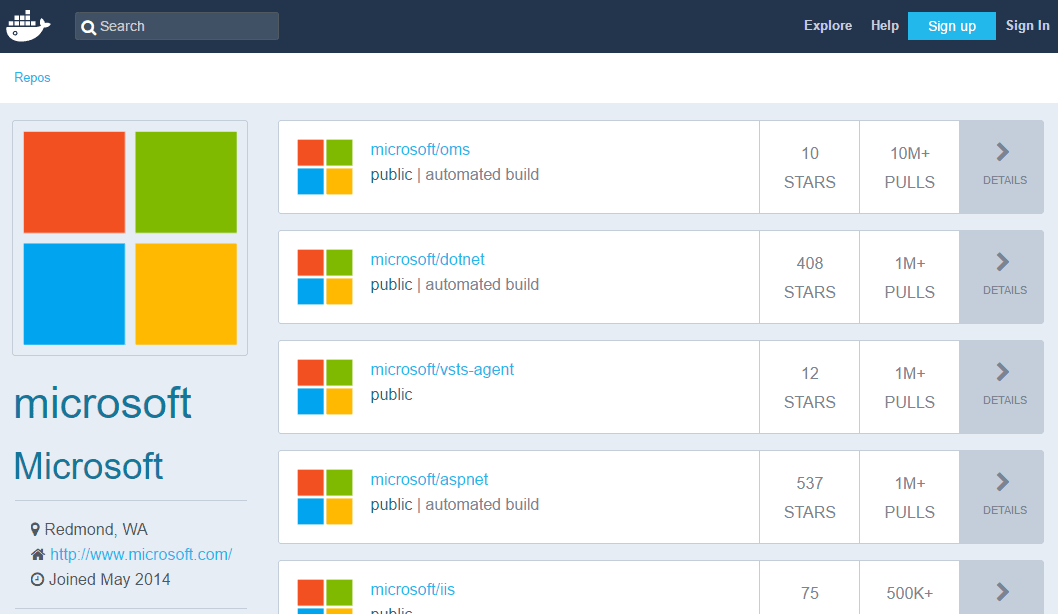 Before deploying Windows Containers, you must prepare your environment with some prerequisites. To do that, you can use a physical or virtual machine, it’s up to you. In my case, I use a VM with the following characteristics:

OK, let’s start by installing the Windows Containers feature on the container host. To perform this task, run the following PowerShell command:

You must restart to apply changes via the Restart-Computer cmdlet:

Then check that the new feature is enabled:

Windows containers being intimately linked to Docker; you must install Docker Engine on the container host. To achieve this goal, you have two possibilities:

The first one is to deploy Docker from the PSGallery repository:

If you need more details about managing packages with PowerShell, I forward you to this article: https://www.simple-talk.com/sysadmin/powershell/managing-packages-using-windows-powershell/

Docker for Windows Server 2016 requires update “KB3176936”. You can download it from the Windows Update Website and then install manually: 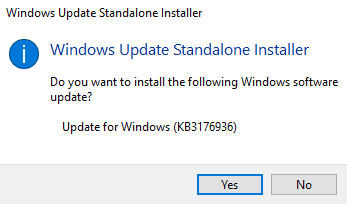 Or you can perform this task using sconfig utility. Then, choose the number 6:

The second way is to install the development Docker version, in order to have the latest features. You must download Docker directly from the official website. Use the Invoke-WebRequest cmdlet:

Next, extract the archive via the Expand-Archive cmdlet:

Now, you can create an environment variable:

To finish, install Docker as a Windows service. So run the following command to register dockerd.exe:

Once installed, the service can be started:

Ok now, the container host is up and running, so we can deploy our first Windows container! For the first example, we will deploy a IIS container, run the following command:

Below is the syntax of the Docker command:

The « Name » parameter adds a friendly name to the container. It is not mandatory but it can be useful to manage your containers later.

Finally, you must specify the container image name. Here, I choose the IIS image provided by Microsoft.

When I run the command, Windows checks if the image is available locally (on the container host). If not, then Docker retrieves the image from the Docker hub. 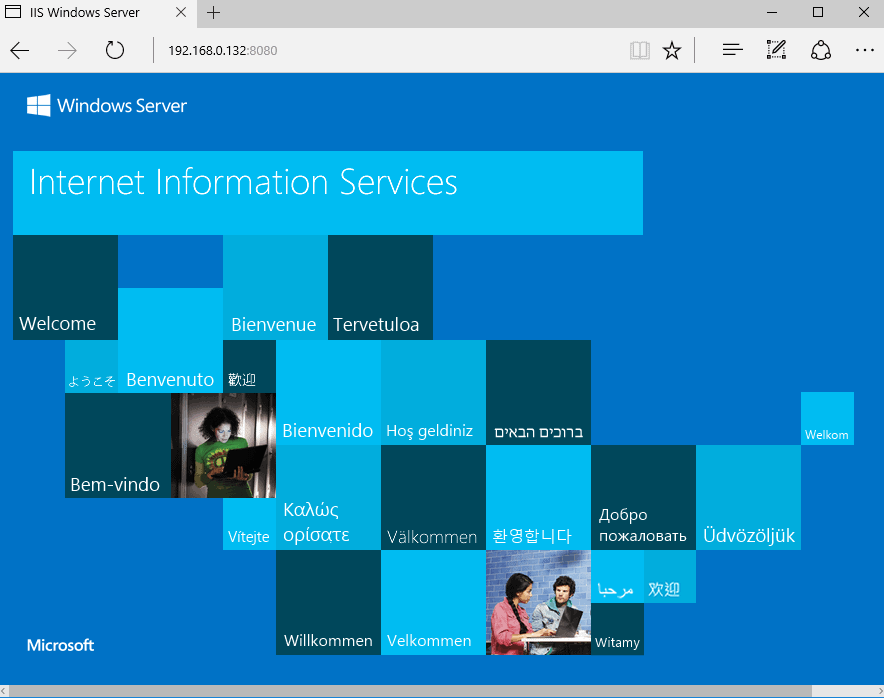 Let’s say you have a server that has been lovingly hand-crafted that you want to containerize? Well, you can use the “Image2Docker” PowerShell module available on GitHub: https://github.com/docker/communitytools-image2docker-win which ports existing Windows application workloads from virtual machines to Docker images. So you can easily convert Windows Services to Windows Containers such as: IIS websites, DNS, DHCP, …

Official website contains relatively little information about licensing, but according to the Windows Server 2016 Licensing Datasheet, Standard Edition provides rights for up to 2 Hyper-V containers when all physical cores in the server are licensed and unlimited Windows Server containers for both editions. 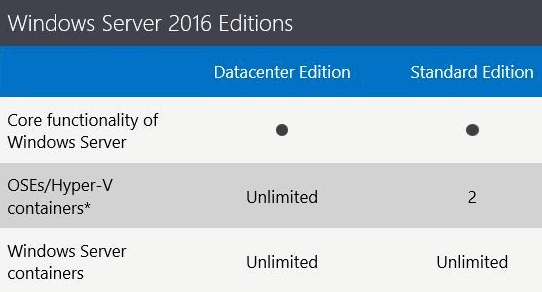 Windows containers are already changing the way organizations build systems and deliver services. Containers are increasingly important to ensure that developers and Ops don’t spend too much time to deploy applications.

Container technology is not new in Linux world, but for Microsoft, it’s a revolution. It is important to urgently find the time to understand the ins and outs of implementing containers in your organization.

We have seen, in this article, how to deploy our first Windows container. You will soon notice that Containers are wonderful for Developers and Administrators because containerization allows great flexibility of use and will simplify your deployments. There are still many things to be said about Containers, so in the next articles, I will explain:

I hope that this article has helped you to increase your knowledge about Windows Containers.