Overcoming the Challenges of Microservices and Docker Containerisation

A microservice architecture can provide great benefits to certain types of applications that have pronounced troughs and peaks in demand, such as web-based shopping apps. With containerization, there is the promise of deploying containerized services in a matter of seconds to deal with demand. Has the Docker ecosystem now reached the level of maturity to allow this type of application to become standard practice?

Since its introduction in 2013, Docker and containerization has grown in importance as a technology. This is primarily because of the growth of the popularity of agile methodology and microservices architecture.

There are several examples in the industries where the Docker is leveraged for the deployment of the micro-services within a micro-services architecture. Any rapid change to the functionality becomes easier and faster to deploy due to the small unit of services and due to Continuous Integration (CI) tools such as Jenkins or Atlassian Bamboo. Continuous Integration tools can build and deploy Docker images across the application environments very easily. Builds can be automated and also can be monitored efficiently using CI administrator console.

This article is about the how an enterprise can leverage containerization and container management solutions, especially the deployment of micro-services. In this paper, we cover the “What, Why and How” questions about Docker design, implementation and governance. In Section 2, we discuss the problems solved by Docker. Section 3 explains the overall Docker architecture. In Section 4, we highlight the key parts of Docker solution:

In Section 5, we give an account of our own experience in implementing Docker for an enterprise in detail. In Section 6, we describe the key business and technical challenges in the implementation and Section 7 summarizes the best practices to overcome these challenges followed by conclusion of the document.

Docker solves the problems of rapid dynamic scaling, testing the image of the application across multiple test environments, hosting micro-services and rapid development environment set-up and infrastructure optimization. The points are illustrated below.

Gilt.com, an online retailer in the USA, has adopted Docker and has used it successfully to handle the dynamic growth in its customer base. The Gilt.com website used to be monolithic Ruby-on-Rails application in 2007. When the online traffic to the site increased, the site started to face problems of scaling. The site was also fragile: any software crash resulted in the entire site experiencing failure resulting in considerable business loss. In 2011, Gilt.com changed the solution to a Java/Scala based architecture that was loosely coupled. In 2015, Gilt.com then re-factored the services into numerous micro-services and automated their deployment process by using Docker containers on AWS cloud. Gilt.com specializes in flash-sales of its brands and the traffic has sudden spikes due to the customers grabbing sales. The Docker-based deployment allows Gilt.com to change the number of containers (application images) dynamically to cater to the spikes in the load.

Docker follows client-server architecture. Docker architecture has 2 tiers – client and host (server) as shown in the diagram below. The Docker client issues Docker commands to pull, build and run Docker images. Docker images are stored in a Docker registry for an enterprise. The images are downloaded by Docker daemon from the registry into the host. Docker daemon runs the images by creating the Docker containers in the host.

Docker container is the server process that does all the heavy lifting, and is also known as Docker daemon. The main tasks of the Docker daemon are as follows-

Micro-services are built using a tool such as Docker maven plugin. The Docker image is pushed to Docker Trusted Registry (DTR).

Architecture for Docker platform for Web based Solution 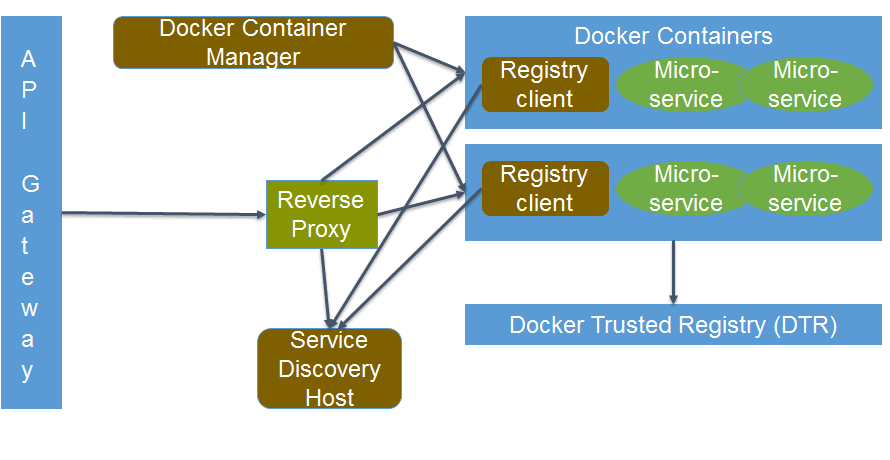 Architecture for Docker for Web based Solution

Docker Hub stores the Docker images. Many enterprises hold Docker Trusted Registry or Docker Hub privately for enterprise security. Because many Docker images contain application logic that contains business logic that is proprietary to the enterprise and hence needs to be kept inside the enterprise hub. The registry maintains various versions of the images thus aiding the version management for the services.

The API Gateway acts as the central point of entry for all REST services for the enterprise. It can act as a first-line of defense to offer security for the containers. It also audits and routes the requests to the reverse proxy. It helps in the API management and governance of the Docker-based solution.

Server such as Nginx or HAProxy can be used as a reverse proxy. It can be easily configured to discover the services dynamically and route the requests to the services.

In Docker-based micro-services deployment, there has to be a service-discovery mechanism. Due to containerized deployment, the location (host and port) of the service can change dynamically and hence the clients need to discover the services running dynamically. There are plugins available for service-discovery in the market. There are two discovery mechanisms available as stated below-

Since Docker 1.8 there has existed a concept called Content Trust[7] . It uses the developer’s private key to sign the images and when the images are downloaded they are checked against the developer’s public key to ensure authenticity. It is a good idea to integrate this mechanism into the continuous build and deployment process.

Secrets include any information that you would not want to leak out to unauthorized agents, but are required by the container to access external resources. Secrets can be bundled in the manifest or can be injected into the containers as runtime environment variables.

The secrets could be optionally encrypted using some encryption libraries such as EJSON, Keywhiz, Vault and similar libraries.

A compromised container can make the host equally vulnerable to security breaches, so we suggest that you need to enable Security Enhanced Linux (SELinux) or SVirt. Alternatively, you can use the “cap-drop” switch while running Docker containers [6] to restrict the capabilities of the container. Also there are products such as Twistlock for maintaining container security.

A Standard benchmark – CIS Docker Benchmark [8] can validate whether the Docker containers follow the best possible security guidelines. Docker Bench is an automated program that can be used to validate against this benchmark.

Docker provides a rudimentary command-line utility to get some basic statistics of a running container. You can run Docker stats command with the name of the containers and it returns the memory, CPU and network usage by the containers.

If the resource-consumption statistics are needed in a good graphical representation, the CAdvisor tool comes in handy.

This is an open source framework for system monitoring and alerting. It can ingest data from a large spectrum of sources, one of which is Docker containers.

Monitoring services runs a separate container and is capable of monitoring multiple servers.

This section provides a real-world example of an application. The application was developed as an on-premise solution in early months of 2016 and was being marketed as such. Later there was a need from multiple prospective customers to make this application available on cloud and also make it such that it should be easy to create an on-premise version deploying the application in several instances for different departments within their business

The following is a pictorial representation of the requirement matrix that was created for the deployment requirements of the application. 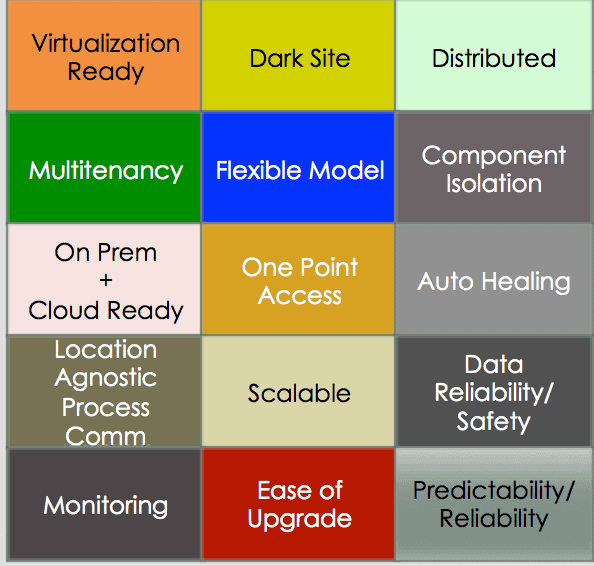 Since the application was already developed, and it would have taken enormous effort in terms of time and money to rewrite it to satisfy the above requirements, the decision was taken to architect the deployment of the application by using containerized approach. Docker, being the de-facto standard when using containers, was chosen as the container technology to be used for packaging and deploying the application.

Application Deployment View Prior to Containerization 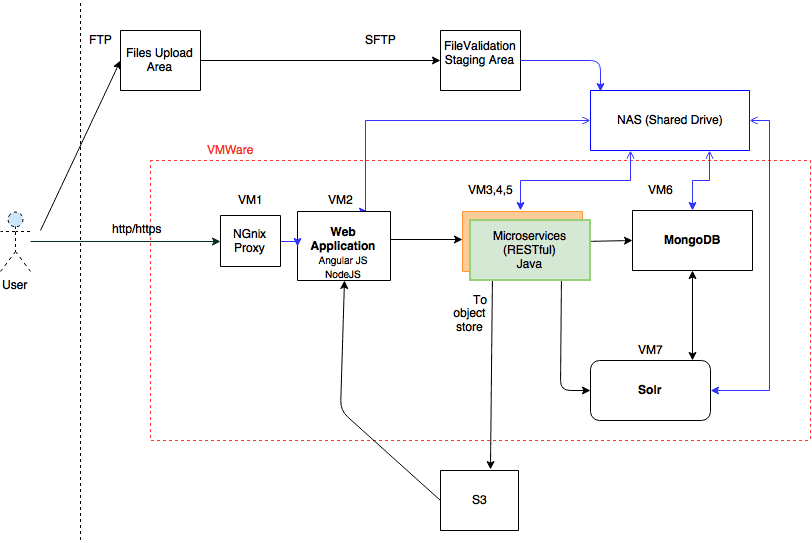 The following process was followed to re-architect the application to a containerized stack for deployment.

Here is a pictorial representation of this new process 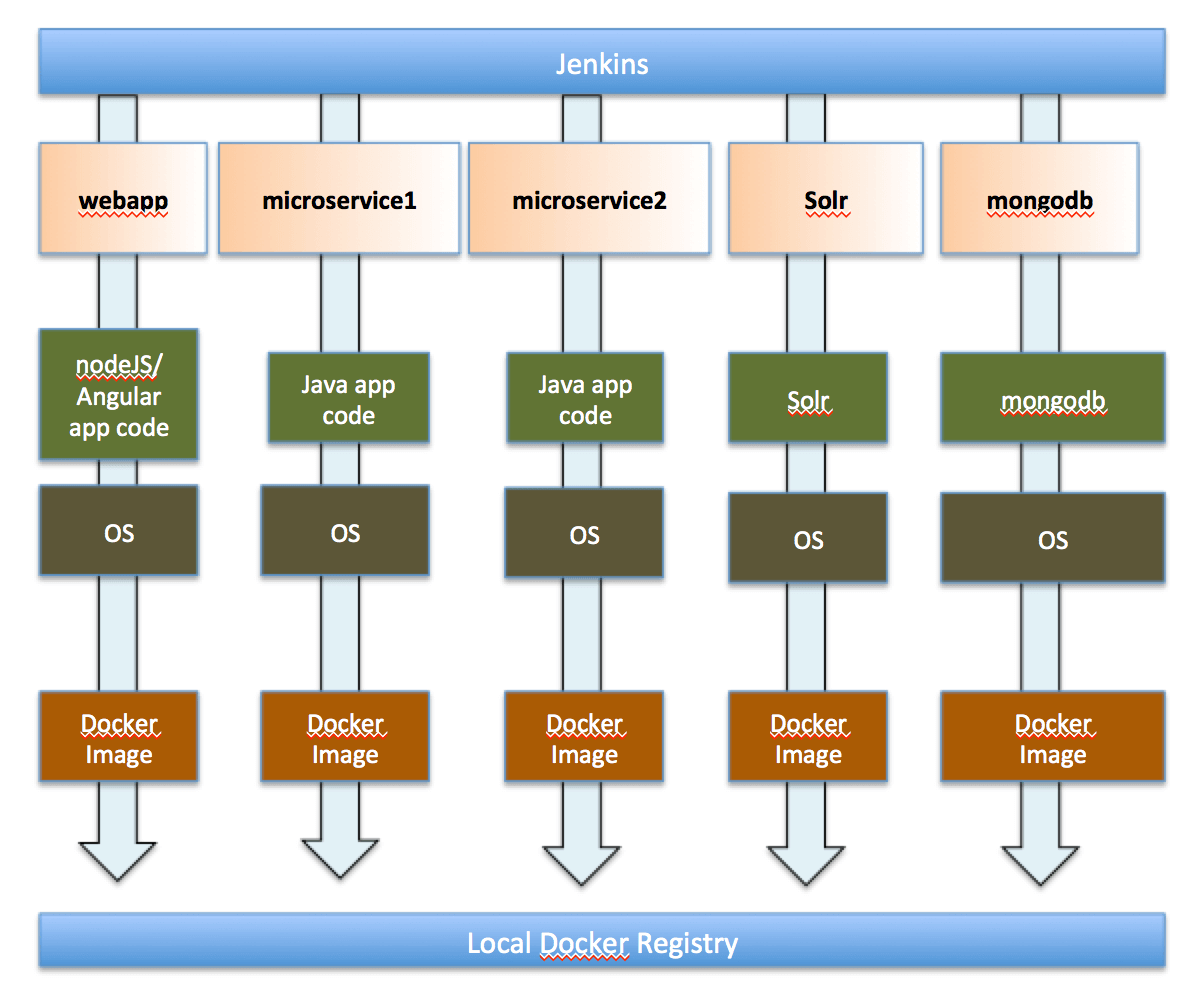 The changes to allow the creating and storing the application components as Docker containers was completed in the first phase of the re-architecting.

The next part that we had to handle was inter-container communication and other requirements listed above seamlessly. Though Docker allows us to isolate the process to different nodes and makes it easier to upgrade/deploy the application, it is tricky to make multiple Docker containers talk to each other. There needs to be some amount of configuration overhead required.

The application deployment architecture after using Kubernetes/Docker was as below

Some highlights of the application after the new deployment architecture

This is a list of components used in the new deployment architecture.

Implementing Docker is faced with many challenges which all stakeholders including business users and technical IT team should be aware of.

These suggestions need to be considered in the light of the needs of the enterprise.

Leverage the famous IoC principle even with containers

Containers are becoming the de-facto standard for the deployments for many types of applications. However, up-front planning is important before taking the container-centric route for development and builds in any application development project. Without this planning. the process of building and deploying applications using Docker containers can become very complex.

Although it is possible to use Docker containers without a container management framework, you will lose some of the advantages of using both together. Securing Docker containers is an important task for the enterprise. Dev and Ops are slowly inching towards each other with the use of containers in the real world.

Anand Joshi has over 22 years of software industry experience, with 11+ years in architecture and design for Java/JEE systems. Anand has architected and designed applications based on micro-services, and has worked in various roles including product developer, designer, software architect, and infrastructure architect. He has been working with Persistent Systems Limited since October 2015.

View all articles by Anand Joshi

Yogesh Bhate has over 19 years of software industry experience in architecting, designing, and developing large-scale business applications. Yogesh has experience in deployment design, integration architecture, performance, and scalability testing. He has a very strong background in data intensive applications, and is currently he is involved in designing/developing applications on Big Data technologies. Yogesh has been working with Persistent Systems Limited since September 2005.

View all articles by Yogesh Bhate