Caching data is one way to improve application performance. In this article, Chandra Kudumla explains a service for caching data found in Azure called Azure Cache for Redis.

This article explains the Azure Cache for Redis and its features, the data types supported, and the pricing tiers available. It will demonstrate the steps to create an Azure Redis Cache from the Azure Portal. The article will also explain how to create a simple console app and connect this app with cache and exchange data.

To follow along with this article, you will need:

Caching is a mechanism to store frequently accessed data in a data store temporarily and retrieve this data for subsequent requests instead of extracting it from the original data source. This process improves the performance and availability of an application. Reading data from the database may be slower if it needs to execute complex queries.

The Azure Redis Cache is a high-performance caching service that provides in-memory data store for faster retrieval of data. It is based on the open-source implementation Redis cache. This ensures low latency and high throughput by reducing the need to perform slow I/O operations. It also provides high availability, scalability, and security.

Azure Cache for Redis has many features for management, performance, and high availability. Here are a few of the most important:

Azure Redis Cache is a fully managed version of an open-source Redis server. i.e., it monitors, manages, hosting, and secure the service by default.

Azure Redis cache enables an application to be responsive even the user load increases. It does so by leveraging the low latency, high-throughput capabilities of the Redis engine.

Azure Redis cache allows replicating or syncing the cache in multiple regions in the world. One cache is primary, and other caches act as secondaries. The primary cache has read and write capabilities, but the secondary caches are read-only. If the primary goes down, then one secondary cache becomes primary. The significant advantage of this is high availability and reliability.

The cluster automatically shards the data in the cache across multiple Azure Cache for Redis nodes. A cluster increases performance and availability. Each shard node is made of two instances. When one instance goes down, the application still works because other instances in the cluster are running.

Azure Redis cache persists the data by taking snapshots and backing up the data.

There are different ways to invalidate the cache.

Create an Azure Cache for Redis

Sign in to the Azure portal, click on the portal menu and select Create a resource menu option as shown in Figure 2. 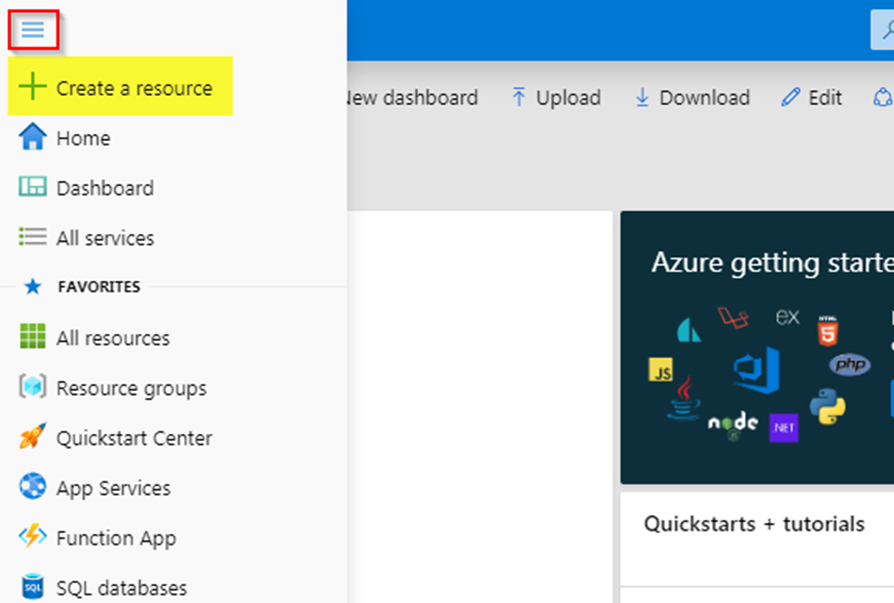 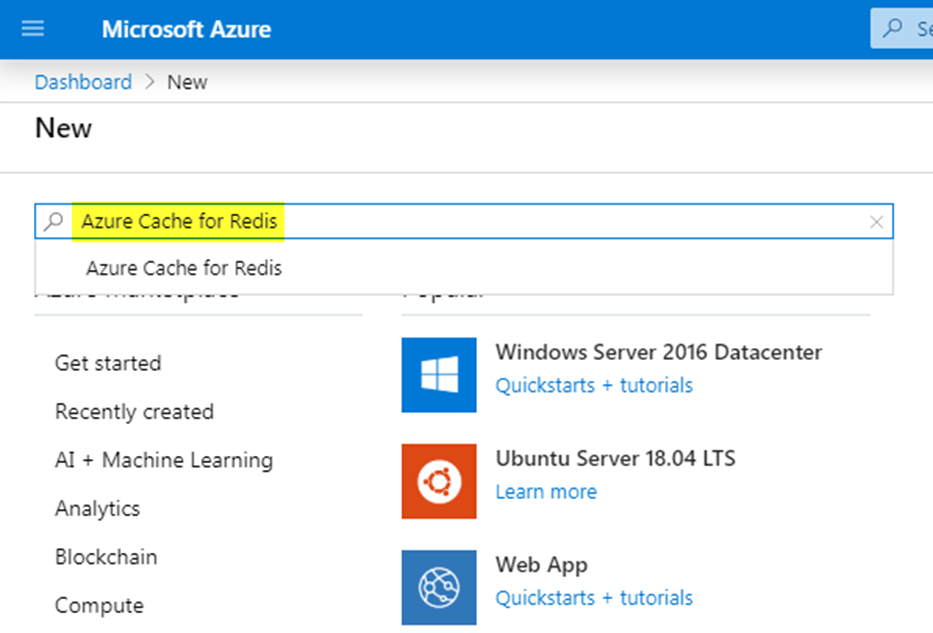 In the next screen, Figure 4, Azure Cache for Redis window, click on the Create button. 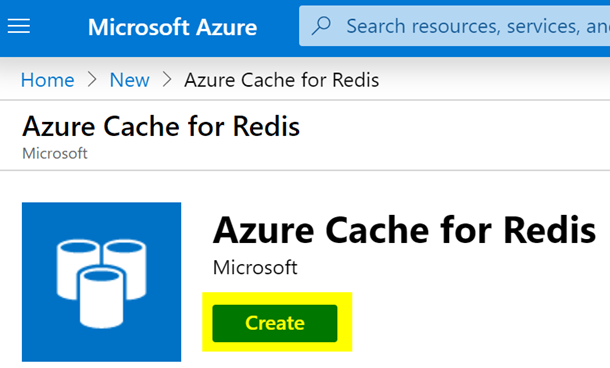 Click View full pricing details. It opens a window (Figure 6) with available pricing tiers. Choosing the pricing tier is essential because this determines the performance of the cache, budget, and other features like dedicated or shared cache infrastructure, SLA, Redis cluster, data persistence, and data import and export.

If you choose one of the Premium tiers, you can configure the cluster by clicking Redis Cluster (Figure 7). You can enable or disable clustering and select the shard count. Note that each shard is comprised of two instances. 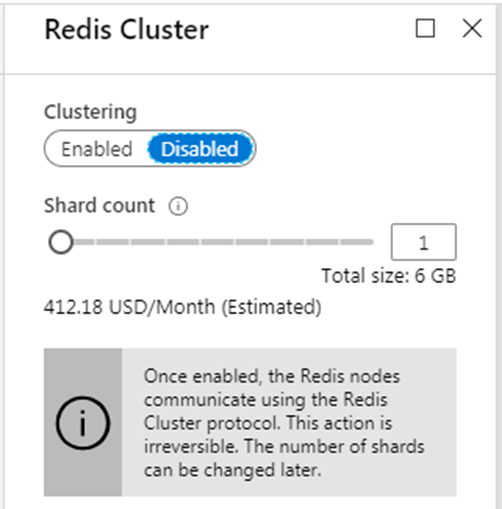 RDB (Redis database) persistence: This option persists the data by taking a snapshot of the cache. The snapshot is taken based on the frequency configured. In the case of recovery, the most recent snapshot will be used.

AOF (Append only file) persistence: This option saves the data for every writes operation. In case of recovery, the cache is reconstruct using stored write operation. 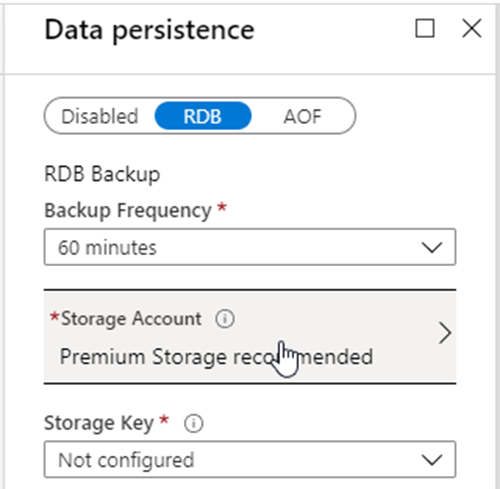 After filling out the required fields on the New Redis Cache window, click on the Create button. After a few minutes, the Azure Redis cache created and running.

Figure 9 shows the Azure Cache for Redis Overview. By default, it is secure because the Non-SSL port is disabled. 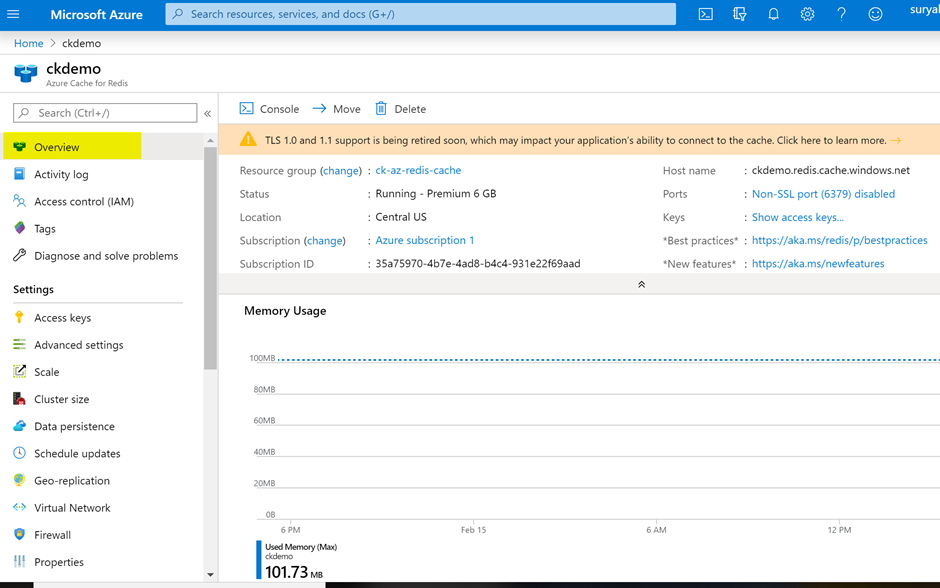 Create a Console App to Use the Cache

To try out the cache, you will create a Console app. Begin by opening Visual Studio and selecting File New Project.

The next screen, Figure 10, is the New Project window. Select the Console App (.Net Framework), fill out the project name and location, and click on the OK button. 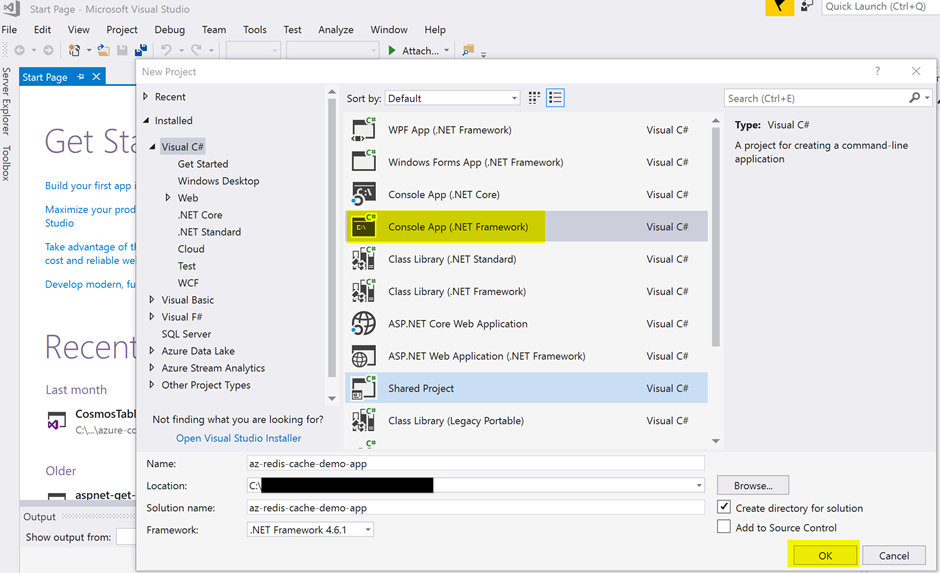 The next screen, Figure 11, shows the new console app.

To connect the Console App to the Azure Redis Cache, you need to install Microsoft.Extensions.Caching.Redis package. To install this package from Visual Studio, go to Tools NuGet Package Manager Manage NuGet Packages for solution…

Figure 12 is the NuGet Package Manager. Make sure that Browse is selected. In the search bar type Microsoft.Extensions.Caching.Redis and select the package from the displayed list. Scroll down and click on the Install button. 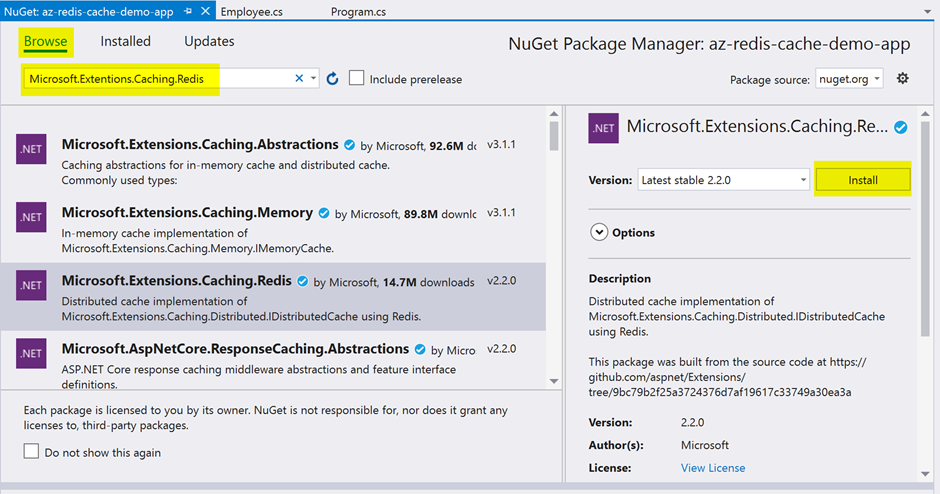 In the next screen, Figure 13, install Newtonsoft.Json package for serialization and deserialization of objects.

Figure 15 shows the code after adding Redis cache connection string that you copied from the Azure portal to App.config file in the console app.

In real-world scenario applications, this connection string or credentials should be stored and accessed more securely.

In the next screen, Figure 16, get the Redis connection string defined in the app.config file in the program.cs file by using the ConfiguationManager class. Add the code to the Program class. The ConnectionMultiplexer class manages the connection with Azure Redis cache. Be sure to include references to System.Configuration and StackExchange.Redis.

Create a class called Employee; this acts as the data source for the console app.

Figure 17 shows the code for the new Employee class. 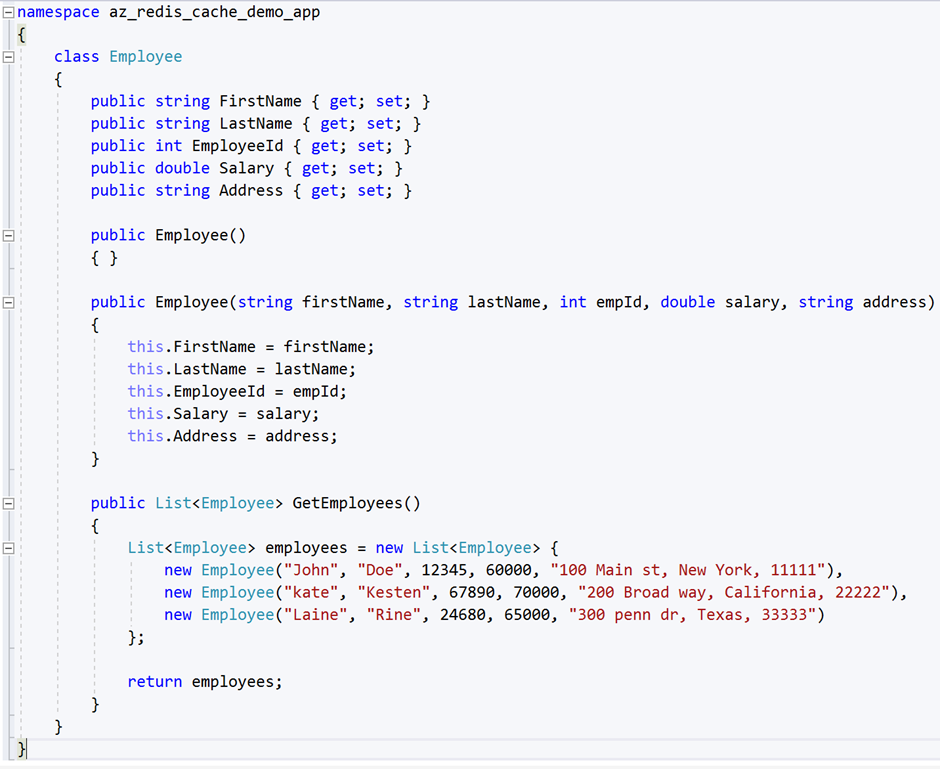 Run the application. The first time, data is not available in Redis cache, and the app gets data from the data source. See below Figure 18 for the console output.

In the next screen, Figure 19, is the result of subsequent calls. The application read the data from the Redis cache.

You can also see the activity in the Azure Portal. Navigate to your Azure Cache for Redis and click Metrics. There you can filter the activity. In Figure 20, the metrics show that data is writing to the cache. 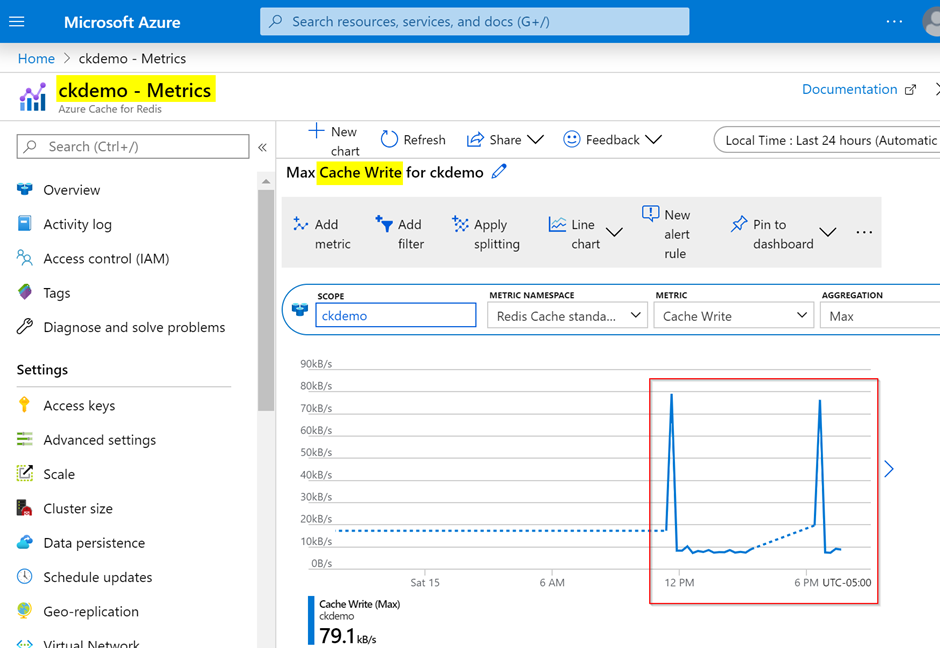 In the next screen, Figure 21, Azure portal Redis cache metrics confirm that data is reading from the cache. 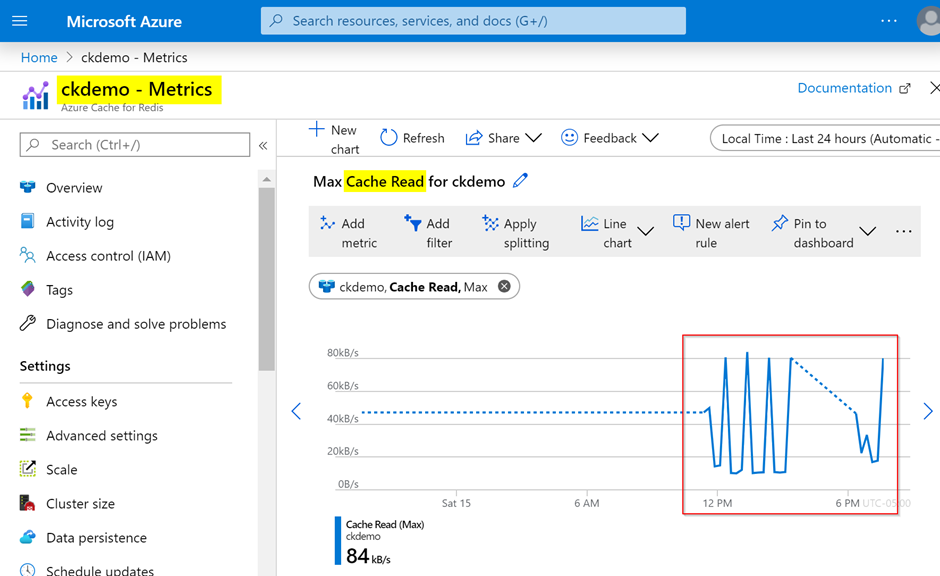 Chandra Kudumula is a Senior Programmer Analyst with more than twelve years of experience in IT. He successfully architected, designed, and developed various highly scalable and highly available enterprise applications in multiple domains such as Finance, Gaming, and Insurance services. He is an AWS Certified Solutions Architect and Azure Developer associate. He can be reachable at https://www.linkedin.com/in/chandra-kudumula-043b549b/.

View all articles by Chandra Kudumula