Anatomy Of A SELECT Statement – Part 2: The Hierarchical Query Clause

My wife and I just welcomed our first child to the world. No, there’s no need to congratulate me; as Chris Rock once said, it’s no big deal, even cockroaches have babies. However, it does mean that I’ve often been up at 3 a.m. rocking my son, mumbling nursery rhymes to him.  Which, of course, always has me thinking of

My wife and I just welcomed our first child to the world. No, there’s no need to congratulate me; as Chris Rock once said, it’s no big deal, even cockroaches have babies. However, it does mean that I’ve often been up at 3 a.m. rocking my son, mumbling nursery rhymes to him.  Which, of course, always has me thinking of hierarchical queries. Of course.

But first, a definition.  A hierarchical query is a type of recursive query that returns a resultset that displays the natural relationship of data.  Or, if you like pretty mental pictures, hierarchical queries return datasets in which each record is (potentially) holding hands with the record before it. 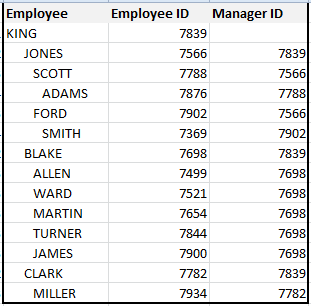 As I said, there are a few keywords we’ll need to get acquainted with in order to understand hierarchical querying. The best way to find out what they are is to zoom in on the hierarchical query clause and study its syntax.

CONNECT BY tells Oracle what the relationship between the parent row and the child row should be. To do this we use a simple condition of the type which we might typically use in a WHERE clause; the only difference here is that we must also use the PRIOR keyword to indicate the parent.

START WITH tells Oracle what is the root record of our hierarchy. It does this by also employing a condition.

In our earlier example, we wanted to start off with the big kahuna, the man with no manager.

So if we throw it all together, we end up with:

We’ve asked our query to start with the big boss, and that’s quite clear. However, from the third record things become a little less clear, as it is not immediately obvious if Scott reports to Jones or directly to King. The LEVEL pseudocolumn returns a number indicating what level of the hierarchy the record is.

Another way to show a node’s position in the hierarchy is to use the SYS_CONNECT_BY_PATH function. This function returns the full path from the root node to the current node, and has the following syntax: 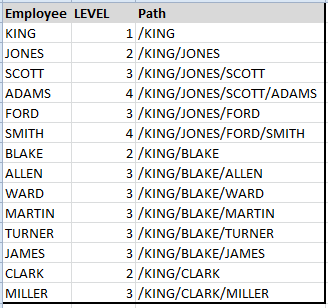 Blake’s a busy boy. He has five direct reports – Allen, Ward, Martin, Turner and James. If we wanted to sort that list alphabetically, we would not be able to use the normal ORDER BY clause, as that would override the hierarchical order created by the CONNECT BY and we’ll end up with Adams on top and King somewhere in the middle. (GROUP BY overrides the hierarchy too.) To sort within the bounds of our CONNECT BY we must use a different clause:

So far we’ve been working with nice, tame data. Our lines are straight, and our hierarchical tree is uncomplicated. However, the real world can be messy like a plate of spaghetti. Imagine if King, instead of being the overall boss, had to report to a board headed by Jones. That would mean that while King is Jones’ boss, Jones is also King’s boss. If we update the EMP table to reflect this, and rerun our query, we get the following error:

To tell Oracle to proceed in spite of loops in our data, we need to modify our CONNECT BY statement to CONNECT BY NOCYCLE.

And, if we wish to identify records where any such loops have been resolved, we would need to include the CONNECT_BY_ISCYCLE pseudocolumn in our query.  CONNECT_BY_ISCYCLE returns  1 where it identifies a loop; otherwise it returns 0.

Except that it’s not.  Since 11gR2 we have been able to query hierarchical data using recursive subquery factoring clauses or, in other words, the WITH clause.  This brings the ANSI standard to Oracle.

I’ll tell you how it all works in the next part of this article.

Anatomy of a SELECT Statement – Part 1: The WITH Clause

0 43
Come, young one.  Come sit by the open fire; hold your cold hands to its warmth. Let me tell you a story.  Back when I was young, the world was a simpler place: we roamed the plains, hunted game with our spears – and Oracle Select statements consisted of only a SELECT, a FROM and, possibly, a WHERE. Things don… Read more
0 43