Clustering is a type of unsupervised machine learning that involves identifying groups within data, where each of the data points within the groups is similar (or related) and different (or unrelated) to data points in other groups. The greater the similarity (or homogeneity) within a group and the more significant the difference between groups, the better or more distinct the clustering. Some clustering applications are recommendation engines, social network analysis, population segmentation, etc. This article explains how to use clustered data to gain insights.

The need for clustering

The value of clustering comes from its ability to quickly give insights from large unstructured data and organize the data into subsets which can be used to drive actions. Data practitioners don’t always have the luxury of having well-labeled datasets. Because clustering is usually a first step to get some insights from the data, by running a clustering algorithm it’s possible to label a large dataset without manual intervention.

What are the types of clustering algorithms?

What type of distance function to use in clustering algorithms?

What are some challenges with clustering models?

How to handle categorical and continuous data while clustering?

Datasets are sometimes a mix of numerical and categorical data. There are a couple of ways to handle categorical data such as one-hot encoding, but this could increase the number of dimensions in your dataset. Hence, one could use Gower distance which is a metric that can be used to calculate the distance between objects whose features are of mix datatypes such as categorical and quantitative. This distance is scaled in a range of 0 to 1, with 0 being similar and 1 being different.

Is normalizing the dataset required for clustering?

In clustering, the distance between data points is calculated to cluster close data points together. The data is normalized to make sure all dimensions are given similar weight. This helps to prevent features with large numerical values from dominating in distance functions. There are multiple ways of normalization such as min-max normalization, z-score normalization, etc.

Implementation of Density Based Scan (DBSCAN) on transactional data

This example will implement the DBSCAN algorithm on a dataset provided by sklearn. It uses the following python packages:

To install any of the above packages, execute pip install package_name within a terminal window.

Step 1: Load data into pandas. There are 1000 records with 2 features

The above code reads a dataset to be clustered into a pandas dataframe and displays first the 5 records using the .head() function. The .info() function displays metadata of the variables in the dataset such as datatype and number of records 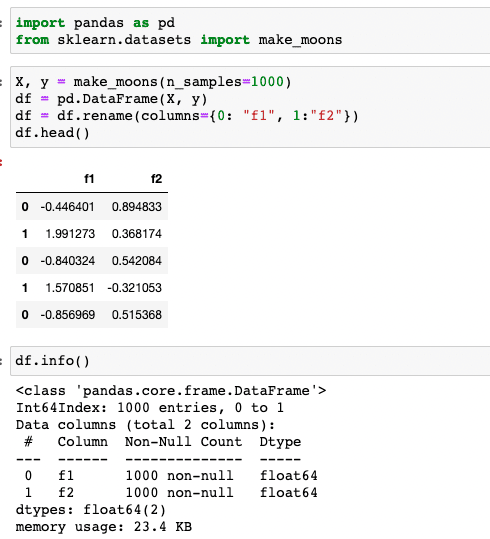 Step 2: Implementing DBSCAN algorithm with default settings to the dataset

In this piece of code, the DBSCAN package is imported from the sklearn library and applied onto the dataset. The labels column will contain the cluster ID of the data points.

As you can see, the data points are segregated into two different categories 0 and 1.

You can finally visualize the clustered results using a scatter plot from the seaborn library. As you can see form the plot, the datapoints are clearly segregated in two different clusters. 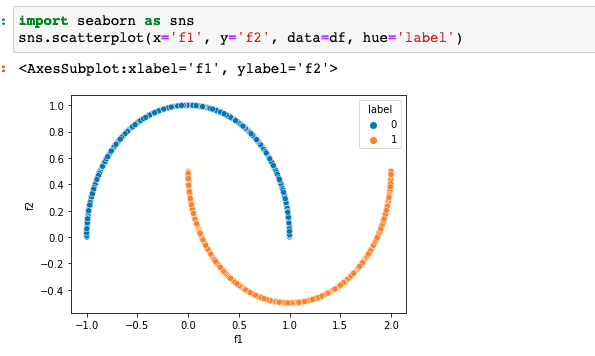 Metrics to evaluate the performance of a clustering model

There are multiple ways to measure the clustering results based on the problem that is trying to be solved. While measures like Silhouette Coefficient give a sense of how well apart clusters from each other are, it may or may not tell how good the clusters for your business problem are. Hence, one way is to generate cluster level metrics by aggregating data points within every cluster and intuitively marking clusters as useful or not, the other way can be sampling data points from every cluster and manually auditing them for usefulness.

Naveed Ahmed Janvekar is a Senior Data Scientist in the United States. He works on solving fraud and abuse problems on the platform that impacts millions of customers in the US and other parts of the world using Machine Learning and deep learning. He has 7+ years of expertise in the Machine Learning space which includes classification algorithms, clustering algorithms, graph modeling, BERT to name a few. He is using Machine Learning and Deep Learning to solve multi-faceted problems. He has a Master's degree in Information Science from The University of Texas at Dallas and graduated top of his class and awarded as scholar of high distinction and inducted in the prestigious International Honor Society Beta Gamma Sigma. He has a Bachelor's of Engineering in Electronics and Communications from India. He has worked with influential firms such as Amazon, Fidelity Investments and KPMG. In his current role he is researching on identifying novel fraud and abuse vectors on ECommerce platforms and using Active Learning to improve Machine Learning model performance. More details can be found on his LinkedIn profile https://www.linkedin.com/in/naveedahmedjanvekar/

View all articles by Naveed Janvekar

0 9
You can find memory leaks in Python code with tracemalloc. In this article, Priyanka Nawalramka demonstrates how to use tracemalloc to find the leaks.… Read more
0 9