Windows Phone 8, possible tablets and what the latest update might mean

Microsoft have just announced an update to Windows Phone 8. As one of the five, maybe six people who actually bought a WP8 handset I found this interesting. Then I read the blog post about it, and rushed off to write somewhat less than a thousand words about a single picture.

The blog post announces an extra column of tiles on the start screen, and support for higher resolutions. If we ignore all the usual flummery about how this will make your life better, that (and the rotation lock) sounds a little like stage setting for tablets. Looking at the preview screenshot, I started to wonder. 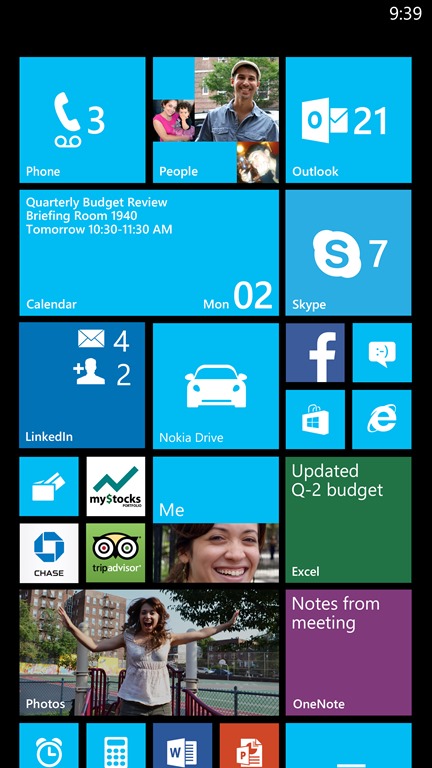 If you can brand something a “phablet” and sleep at night you’re made of sterner stuff than I am, but that’s beside the point. It’s explicit in the post that Microsoft are expecting a broader range of form factors for WP8, but they stop short of quite calling out tablet size. The extra columns and resolution definitely back that up, so why stop at a 6 inch “phablet”?

Sadly, the string of numbers there don’t really look like a Lumia model number – that would be a bit tendentious even for a speculative blog post about a single screenshot.

“Productivity” is interesting too. I get into this a bit more below, but this is a pretty clear pitch for a business device.

Something that would look quite decent on a 7 inch screen, but something a bit too vertical to go toe-to-toe with the Surface.

Certainly, it would look a lot better on a large-factor phone than any of the current models. Those tiles are going to get cramped and a bit ugly if the handsets aren’t getting bigger.

You have a bunch of missed calls, you rarely text, use a stocks app, and your budget spreadsheet and meeting notes are a thumb-reach away. Outlook is your main form of email. You care enough about LinkedIn to not only install its app but give it a huge live tile. There’s no beating about the bush here, the implicit persona is a corporate exec. With Nokia in the bag and Blackberry pushing daisies, that may not be a stupid play.

There’s almost certainly a niche there if they can parlay their corporate credentials into filling it before BYOD (which functionally means an iPhone) reaches the late adopters. The really quite slick WP8 Office implementation ought to help here. This is the face they’ve chosen to present, the cultural milieu they’re normalizing for Windows Phone. It’s an iPhone for Serious Business Grown-ups.

Could work, I guess.

Does it mean anything?

Is the latest WP8 update a sign that we can expect to see tablets running Windows Phone rather than WinRT?

Well, WinRT tablets haven’t exactly taken off but I’m not quite going to make a leap like that just from a file name and a column of icons.

I feel pretty safe, however, conjecturing that Microsoft would like to squeeze a WP8 “phablet” into the palm of every exec who’s ever grumbled about their Blackberry, and this release might get them a bit closer. If it works well incrementing up to larger devices, then that could be a fair hedge against WinRt crashing and burning any harder in the marketplace.

View all articles by Roger Hart