Finally, in this series, I am going to cover some of the security issues that can trip you up when using sandboxed appdomains.

DISCLAIMER: I am not a security expert, and this is by no means an exhaustive list. If you actually are writing security-critical code, then get a proper security audit of your code by a professional. The examples below are just illustrations of the sort of things that can go wrong.

The most obvious one is the issue covered in the MSDN documentation on creating a sandbox, in step 3 – the sandboxed appdomain has the same ApplicationBase as the controlling appdomain. So let’s explore what happens when they are the same, and an exception is thrown.

And in the controlling assembly: 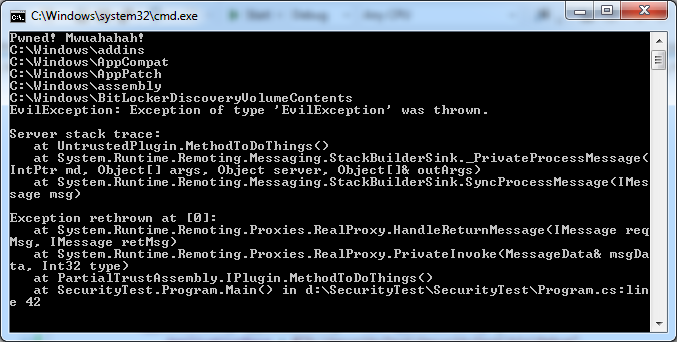 Oops. We’ve allowed a class that should be sandboxed to execute code with fully-trusted permissions! How did this happen? Well, the key is the exact meaning of the ApplicationBase property:

The application base directory is where the assembly manager begins probing for assemblies.

As an extension of the previous point, you shouldn’t directly reference types or methods in the sandboxed dll from your application code. That loads the assembly into the fully-trusted appdomain, and from there code in the assembly could be executed. Instead, pull out methods you want the sandboxed dll to have into an interface or class in a partially-trusted assembly you control, and execute methods via that instead (similar to the example above with the IPlugin interface).

You should only assert permissions when you are absolutely sure they’re safe. For example, this method allows a caller read-access to any file they call this method with, including your documents, any network shares, the C:\Windows directory, etc:

Be careful when asserting permissions, and ensure you’re not providing a loophole sandboxed dlls can use to gain access to things they shouldn’t be able to.

Hopefully, that’s given you an idea of some of the ways it’s possible to get past the .NET security system. As I said before, this post is not exhaustive, and you certainly shouldn’t base any security-critical applications on the contents of this blog post. What this series should help with is understanding the possibilities of the security system, and what all the security attributes and classes mean and what they are used for, if you were to use the security system in the future.