Unlike the other concurrent collections, ConcurrentBag does not really have a non-concurrent analogy. As stated in the MSDN documentation, ConcurrentBag is optimised for the situation where the same thread is both producing and consuming items from the collection. We’ll see how this is the case as we take a closer look. Again, I recommend you have ConcurrentBag open in a decompiler for reference.

ConcurrentBag makes heavy use of thread statics – static variables marked with ThreadStaticAttribute. This is a special attribute that instructs the CLR to scope any values assigned to or read from the variable to the executing thread, not globally within the AppDomain.

This means that if two different threads assign two different values to the same thread static variable, one value will not overwrite the other, and each thread will see the value they assigned to the variable, separately to any other thread. This is a very useful function that allows for ConcurrentBag’s concurrency properties.

You can think of a thread static variable:

as doing the same as:

where the executing thread’s identity is used to automatically set and retrieve the corresponding value in the dictionary.

In .NET 4, this usage of ThreadStaticAttribute is encapsulated in the ThreadLocal class.

ConcurrentBag, at its core, operates as a linked list of linked lists: 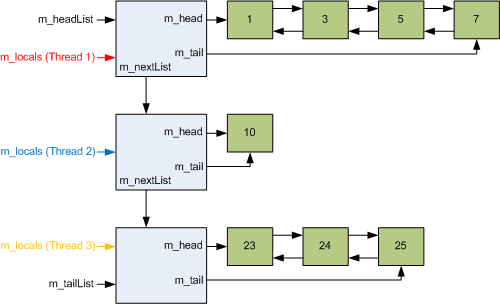 It is important to note that, although the m_locals variable is thread-local, that only applies to accesses through that variable. The objects referenced by the thread (each instance of the ThreadLocalList object) are normal heap objects that are not specific to any thread. Thinking back to the Dictionary analogy above, if each value stored in the dictionary could be accessed by other means, then any thread could access the value belonging to other threads using that mechanism. Only reads and writes to the variable defined as thread-local are re-routed by the CLR according to the executing thread’s identity.

So, although m_locals is defined as thread-local, the m_headList, m_nextList and m_tailList variables aren’t. This means that any thread can access all the thread local lists in the collection by doing a linear search through the outer linked list defined by these variables.

So, onto the collection operations. First, adding items. This one’s pretty simple. If the current thread doesn’t already own an instance of ThreadLocalList, then one is created (or, if there are lists owned by threads that have stopped, it takes control of one of those). Then the item is added to the head of that thread’s list.

That’s it. Don’t worry, it’ll get more complicated when we account for the other operations on the list!

This is where it gets tricky. If the current thread’s list has items in it, then it peeks or removes the head item (not the tail item) from the local list and returns that. However, if the local list is empty, it has to go and steal another item from another list, belonging to a different thread. It iterates through all the thread local lists in the collection using the m_headList and m_nextList variables until it finds one that has items in it, and it steals one item from that list. Up to this point, the two threads had been operating completely independently. To steal an item from another thread’s list, the stealing thread has to do it in such a way as to not step on the owning thread’s toes.

Recall how adding and removing items both operate on the head of the thread’s linked list? That gives us an easy way out – a thread trying to steal items from another thread can pop in round the back of another thread’s list using the m_tail variable, and steal an item from the back without the owning thread knowing anything about it. The owning thread can carry on completely independently, unaware that one of its items has been nicked.

However, this only works when there are at least 3 items in the list, as that guarantees there will be at least one node between the owning thread performing operations on the list head and the thread stealing items from the tail – there’s no chance of the two threads operating on the same node at the same time and causing a race condition.

If there’s less than three items in the list, then there does need to be some synchronization between the two threads. In this case, the lock on the ThreadLocalList object is used to mediate access to a thread’s list when there’s the possibility of contention.

In ConcurrentBag, this is done using several mechanisms:

This allows a thread to steal an item from another thread’s list without corrupting it. What about synchronization in the collection as a whole?

In order to ensure a consistent view, all operations on the collection are stopped while the count or ToArray is performed. This is done by freezing the bag at the start, performing the global operation, and unfreezing at the end:

The global operation can then be performed while the bag is frozen, but no other operations can take place at the same time, as all other threads are blocked on a list’s lock. Then, once the global operation has finished, the locks are released, m_needSync is unset, and normal concurrent operation resumes.

That’s the essence of how ConcurrentBag operates. Each thread operates independently on its own local list, except when they have to steal items from another list. When stealing, only the stealing thread is forced to take out the lock; the owning thread only has to when there is the possibility of contention. And a global lock controls accesses to the structure of the collection outside the thread lists. Operations affecting the entire collection take out all locks in the collection to freeze the contents at a single point in time.

So, what principles can we extract here?

That’s all the concurrent collections covered. I hope you’ve found it as informative and interesting as I have. Next, I’ll be taking a closer look at ThreadLocal, which I came across while analyzing ConcurrentBag. As you’ll see, the operation of this class deserves a much closer look.