Portable Class Libraries were introduced with Visual Studio 2010 SP1 to aid writing libraries that could be used on many different platforms – the full .NET 4/4.5 framework, Windows Phone, Silverlight, Xbox, and Windows Store apps. You simply select which platforms and versions you want to target, then the available subset of APIs are magically available. But how does it work? How does Visual Studio know what it can target, and how does the same assembly run on many different platforms? Today, I’ll be finding out.

When you create a PCL in Visual Studio, you select the platforms and versions you want to target. In this example, I’ve selected everything at the lowest available version. In the project references list, this turns into a generic ‘.NET Portable Subset’, with no real identifying information as to what it actually is: 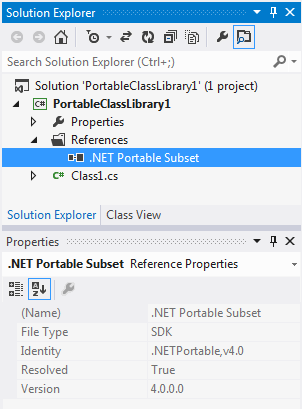 Hmm, ok, well lets see what the actual built assembly does with it. Lets create a field of type Action<T1,T2> so the assembly actually has something in it:

After building the assembly, and opening it up in a decompiler, we can see that that mysterious ‘.NET Portable Subset’ reference has turned into standard assembly references to mscorlib.dll and System.Core.dll. However, they look a bit odd:

2.0.5.0 is the version number used by Silverlight assemblies, and that’s the Silverlight public key, but that ‘Retargetable’ flag is new. And if you have a look at the assembly-level attributes, you’ll spot something familiar:

Aha! There’s the ‘.NET Portable Subset’ from the Visual Studio reference list. But what about the target framework? ".NETPortable,Version=v4.0,Profile=Profile1"? What’s that all about? Well, have a look in ‘C:\Program Files (x86)\Reference Assemblies\Microsoft\Framework\.NETPortable\v4.0\Profile\’. In there is a list of every possible .NET 4 PCL subset you can target (22 in total). Within each profile directory are the available assemblies containing the types that can be used, and an xml file for each framework supported by that profile containing platform version information.

These profile directories have been pre-calculated by Microsoft and installed alongside visual studio. When you create a PCL project, and select the platforms and versions you want supported, Visual Studio looks at all the available profiles and the framework versions they are valid for. From the version and platform information in each profile it works out the most applicable profile, and dlls in that profile are the ones it compiles the PCL assembly against and to provide intellisense support.

But these dlls are useless at runtime. If you open one of the dlls in a decompiler, you’ll see that all the method bodies are empty or simply return the default value for the return type. These dlls exist only to be referenced and compiled against.

So the dlls in the Reference Assemblies folder are, rather unsuprisingly, only to be referenced. Something else happens at runtime to make the portable library work on all the supported frameworks.

It turns out that it all comes down to a feature of .NET assemblies that was introduced in .NET 2, and I looked at two years ago – type forwards. In the portable class library I’ve built, the System.Action`2 type I’ve used has been resolved to the System.Core assembly. In different platforms, it may be in different places. But every platform will either contain the type in System.Core, or System.Core will have a type forward to where the type is actually located.

So, as you’ll see in the framework-specific reference assemblies, Silverlight 4, Windows Phone, and Xbox all have System.Action`2 located in their System.Core.dll, so the type is resolved successfully on those platforms. Both the desktop and Silverlight 5 System.Core.dll have a type forward for System.Action`2 to the relevant mscorlib.dll, where the type is actually located.

There is one more thing we need to sort out. If you have a look at the assembly references in the original PCL we built, they reference a specific version of mscorlib.dll and System.Core.dll:

and .NET 4 desktop and .NETCore:

There’s nothing magic about portable class libraries. They are compiled just like any other assembly, but are compiled against a specific pre-defined subset of the libraries available in the different frameworks, defined by portable profiles representing the various combinations of types and methods available. When the library is executing on a specific framework at runtime, type fowards redirect any types that have been moved to a different assembly in that framework. The common CLR, assembly metadata and IL formats across all the frameworks and versions ensure the actual code logic in the assembly executes the same way on any available framework.

Azure SQL: Extended Events and the use of slash “/”

0 1
Extended Events is a very important feature to monitor Azure SQL. Recently I faced a very interesting behavior of this feature in relation to the use of the slash (“/”). URL’s use the “/” on it. However, the “/” has different meanings depending on where in the URL it appears. Create a credential for authentication … Read more
0 1