In this blog, we compare two of the most popular types of backups in MySQL - backups of a physical and logical nature. Curious what they are and how they work? You've come to the right place.

Everyone who has ever backed up data using any kind of RDBMS knows a thing or two about backups. Backups are a central part of data integrity – especially nowadays, when data breaches are happening left and right. Properly tested backups are crucial to any company: once something happens to our data, they help us quickly get back on track. However, some of you may have heard about the differences between backups in database management systems – backups are also classified into a couple of forms unique to themselves. We’re talking about the physical and logical forms – these have their own advantages and downsides: let’s explore those and the differences between the two. This tutorial is geared towards MySQL, but we will also provide some advice that is not exclusive to MySQL.

What are Logical Backups?

Sometimes though, developers might find themselves in waters where recreation of files is required.

What are Physical Backups?

Physical backups, as you might’ve guessed, copy the “physical” data – files – that comprise a database. As far as MySQL is concerned, the physical backup of MySQL usually consists of a copy of the data directory found here (Windows-based example – in Linux, the directory would be /var/lib/mysql/mysql5.7.36/data):

Taking logical backups within MySQL is easier than you might’ve guessed – think of any part of MySQL that backs up statements to recreate data. Got one? You’ve got yourself a logical backup!

In MySQL, logical backups are taken by:

Some of the abilities of phpMyAdmin can be seen below: 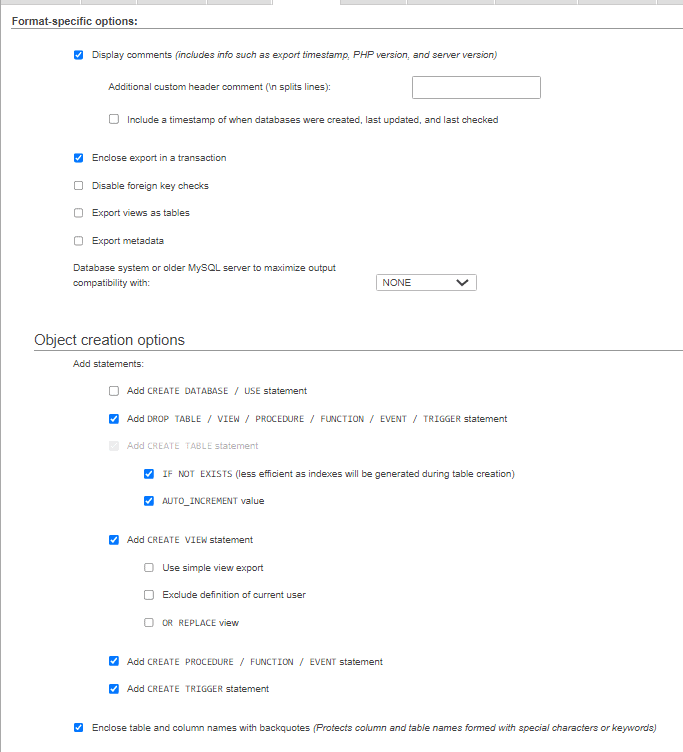 Since phpMyAdmin is one of the most widely used tools within MySQL, it’s logical (see what we did there?) that it offers a lot of options for both junior developers and experienced DBAs alike (see example above.) phpMyAdmin isn’t anything fancy and it’s been here for decades – yet, its slick UI and rich feature set make it stand out from the crowd.

The next tool in the toolset of a MySQL DBA is, of course, mysqldump itself – the tool works much like the Export functionality within MySQL, just that it’s command line-based. For all of the nitty-gritty details, refer to the first blog of these series, but in a nutshell, mysqldump is once again blessed with an extremely rich set of features including, but not limited to:

In order to use mysqldump, we need to be privileged enough to issue SELECT queries, and the syntax would look something similar to the following statement (to be issued before you log in to your database via the CLI on Windows or Linux):

If you’re security minded, keep in mind that you can also prevent yourself from providing a username (-u) and the password (-p) by specifying it in the main configuration file of MySQL under the [mysqldump] heading like so (specify the user and password variables) – doing so will prevent anyone from seeing your username and password in the list of last issued commands in Linux:

For many people, phpMyAdmin and mysqldump provides enough of a grip into the world of backups – however, some might say the capabilities of the tools are a little lacking; those who venture into the world of big data might have to confirm the statement from experience – while both phpMyAdmin and mysqldump can offer powerful methods to back your data up in a fashion that is quicker than usual (LOCK TABLES provides developers with the ability to lock tables for a certain time until the backup is finished making its operations significantly quicker), both of those methods have a glaring flaw – the backups they create are riddled with INSERT statements.

There’s nothing “wrong” with INSERT statements per se, but their weakness is that they’re very ill-equipped to handle anything more than a couple million rows at a time: the core reason behind this is that INSERT statements come with a lot of overhead that MySQL has to consider – amongst other things, that includes parsing too. Imagine running 500,000 INSERT queries one after another where MySQL has to complete the following steps:

Complete these steps. Now complete them again and repeat everything for additional 499,998 iterations. Does that sound quick? Sure, if we lock the tables, we might avoid the steps #3 and #8, but our queries will be slow nonetheless – there are a lot of things MySQL has to consider when running INSERT queries. There is a solution, though – we should also look into the LOAD DATA INFILE [path] INTO TABLE [table] query which is specifically designed for big data sets.

An alternative to INSERT that’s specifically designed for big data sets looks something like this:

That’s the LOAD DATA INFILE query, of course. It’s designed specifically for bulk data loading, and it’s capable of loading data in with “bells and whistles”:

When LOAD DATA INFILE is in use, MySQL doesn’t perform as many operations as it does when INSERT INTO is in use, making operations significantly faster. To take a backup of your big data set use its brother – SELECT * INTO OUTFILE – like so:

Then use LOAD DATA INFILE to load data back into your database (here we also use the IGNORE statement to ignore all potential errors – duplicate key issues, etc.):

However, while these three options comprise logical backups – the most frequently used form of backups in MySQL – and the process of taking them is quick, easy and straightforward, keep in mind that there’s also another way to accomplish your goals – people can also take backups in a physical form. Such backups copy files containing the data instead of recreating statements that build the data.

Physical backups offer the ability to copy files (physical data) instead of the statements that recreate it. To take a physical backup in MySQL: 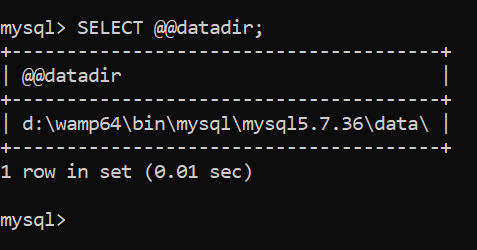 If, for some reason, you find yourself using MyISAM (which is obsolete at the time of writing), taking physical backups of it is even easier – you just need to copy the data folder containing your databases, their data (.MYD files) and associated indexes (.MYI files.)

Physical backups can be useful when there’s a necessity to restore everything from a database from some media storage in one go, however, some might call the process of taking them a little tedious. To each their own though.

MySQL offers everyone a couple of ways to back up data – while the most common option are logical backups that back up statements that recreate the data, indexes, partitions, and all related details, some might make use of physical backups where users copy the data files themselves: each option has its own upsides and downsides, so make sure to try both options out before your plan out your backup strategy. Familiarize yourself with all of the options, then make your own, physical or logical, decision.

We hope that this blog has been informational and that you’ve learned something new, and until next time!

Lukas Vileikis is an ethical hacker and a frequent conference speaker. Since 2014, Lukas has found and responsibly disclosed security flaws in some of the most visited websites in Lithuania. He runs one of the biggest & fastest data breach search engines in the world - BreachDirectory.com, frequently speaks at conferences and blogs in multiple places including his blog over at lukasvileikis.com.

View all articles by Lukas Vileikis

0 0
In this blog, we walk you through one of the most prominent MySQL logical backup solutions - a CLI-based tool called mydumper.… Read more
0 0