I believe I’m not alone on this feeling: It seems like every time we use the Azure Portal some new feature appear. The features reproduce themselves faster than rabbits. Did you had this feeling before? Share your thoughts in the comments.

This week, working with Azure, I found some new small features around and decided to share them with you. When does these features appeared? Where did they come from? No idea, but they are interesting. It’s even possible they were there for some time and I never reached them. Anyway, Tighten your seat belt and prepare for a ride.

When we provision a virtual machine, many additional objects are provisioned together it: Disk (or disks), Network Interface and Public IP, for example.

This usually creates problems when deleting a VM. If you have multiple VMs in the same resource group, you need to locate each object related to the VM and delete them.

Some features, such as Availability Sets and Site Recovery, requires us to provision multiple VMs in the same resource group. This requirement and the deletion problem annoys me a lot. Provisioning on this way creates problems when deleting the VM. It becomes difficult to select the correct objects. Sometimes Azure also has problems identifying the correct deletion order, according the objects dependencies.

The deletion process, by the way, deserves a special mention: I spent an entire week working with Azure without getting a single deletion error – when azure mistakes the order to delete dependent objects. This is great!

The Load Balancer, a layer 3 load balancer in Azure, got a new option for us to select: Regional or Global.

A local load balancer requires the connection from the end user to reach it, on the region it’s deployed. A global load balancer, on the other end, intercepts the request anywhere in the world, on the border of the Azure network, and process the request, without being tied with a region.

One side note about this change is the mix of names: Now, “Global” for load balancers have two different meanings depending on the context.

An internal Load Balancer can be used by internal applications, put behind another load balancer or exposed to the internet using NAT.

This is a new SKU for the load balancer. This feature is in preview, but I could only notice this when checking the documentation.

A Gateway load balancer works as a load balancer/gateway for NVA’s. It redirects traffic to NVA’s, allowing them to work as firewalls, analyse the network traffic and many additional tasks. 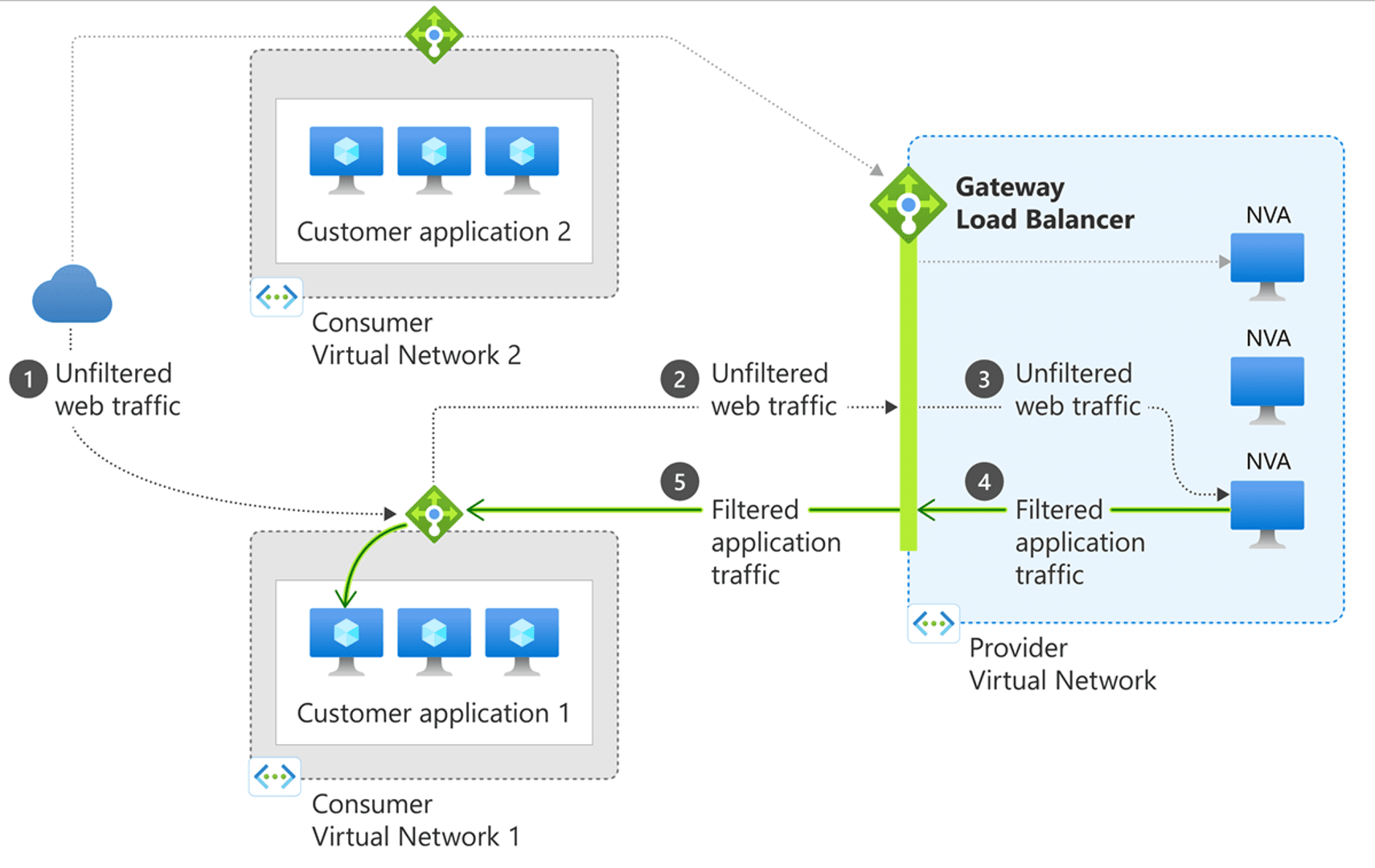 Public load balancers have the option to redirect their traffic to the NVA’s, using the Gateway Load Balancer. According to the documentation, we also should be able to configure network interfaces to redirect their traffic to the gateway load balancer. However, I couldn’t find this option on network interfaces in the portal. Maybe it’s because it’s still in preview.

This is a very interesting and simple improvement. When configuring backup for a VM to recovery services vault, we were limited to once a day backup. Anything beyond that required a custom backup server.

I don’t know exactly why this option appear like it was a total different kind of backup. It seems to me the improvement from once a day to hourly backup is the main new feature here. 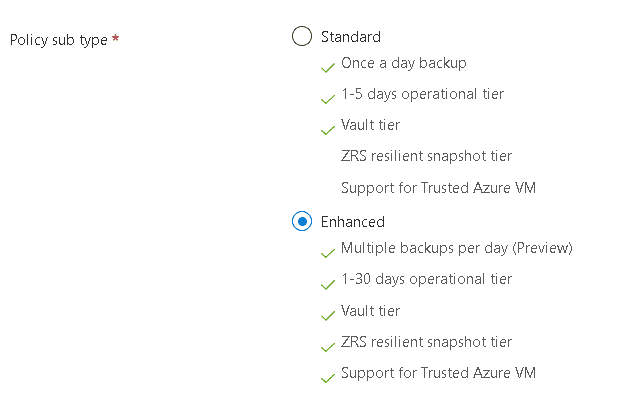 The images below show the difference between the retention on the old and new backup method.

The hourly backup feature, however, is only available under request to join the preview. On the other hand, the change on the retention days is available.

Choice of what will be encrypted in a storage account

The possibility to encrypt a storage account using a customer managed key is very interesting. It’s not a new feature at all.

The new feature is the possibility to select the services affected by the customer managed key: Blob Storage, File Storage, Tables or Queues.

It escapes to me why someone would like to apply the encryption key to only some services.

Link to set the permissions for a VPN Gateway

This is, probably, the most hidden of the new features. When we configure a point to site VPN to use Azure Authentication, we need to give permission to Azure VPN App to access our Azure Active Directory.

This requires us to follow a detailed documentation from Microsoft website to build a complex URL and call it on the browser.

The new feature: Now we have a link on the configuration page. Clicking on the link we trigger the same URL, setting the permission to Azure VPN.

One complex URL less to build while configure Azure Authentication for a VPN. A few helpers more on the text boxes and we will not need to open the documentation anymore to complete this configuration.

DSC on a Virtual Machine

The Desired State Configuration made from a Virtual Machine blade instead of an Automation Account is already in preview for some time. The first time I tested it, the results were not much integrated with the automation account. 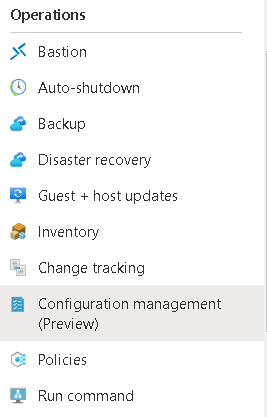 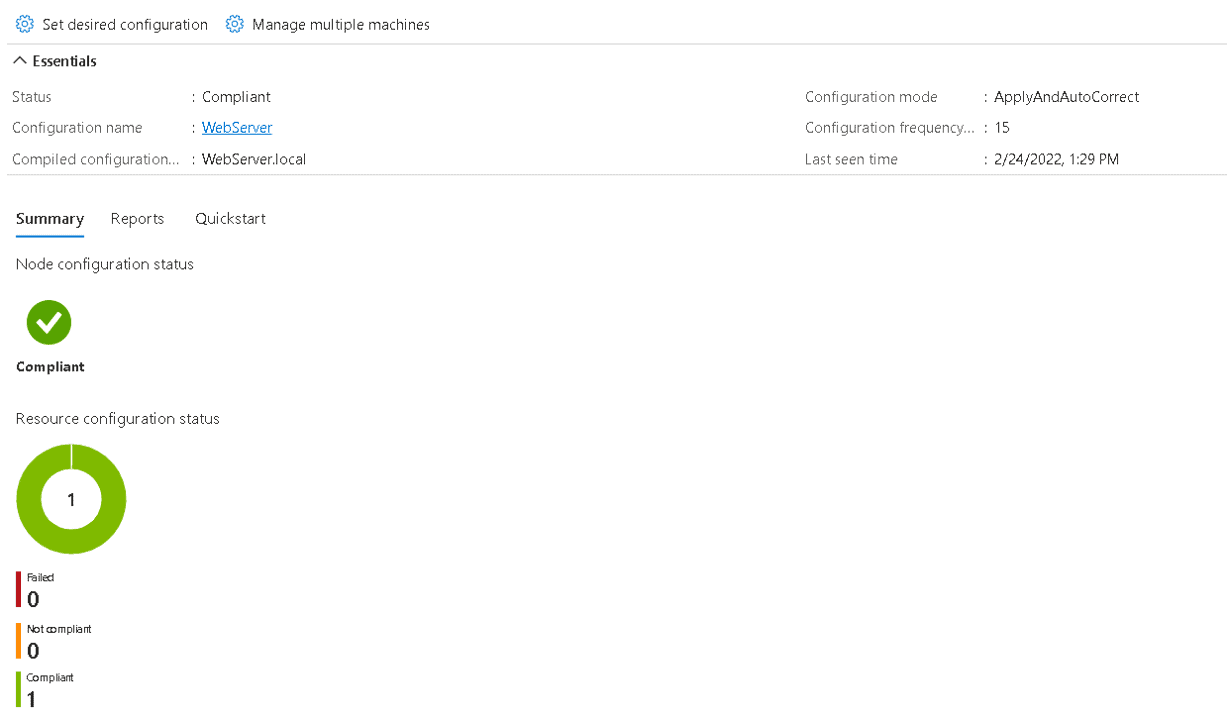 The button Manage Multiple Machines on a single virtual machine takes us to the automation account used to complete the DSC configuration. The synchronization is way better.

0 2
The only way to derive meaning from the massive amounts of data collected today is to develop innovative high-performing, high-capacity storage solutions. In this book, Robert Sheldon explains the many types of storage currently available and what's on the way.… Read more
0 2