Anatomy of a .NET Assembly – The DOS stub

The DOS stub at the top of the file is the first thing you notice when you open a .NET assembly in a hex editor. But what do those bytes mean, and what do they do? As I discussed in a previous post, the first 64 bytes are the DOS header, and the next 64 bytes is the stub program. What does that program do?

All modern x86-compatible processors, right up to the latest Pentiums and Athlons, boot up into real mode, the addressing mode used in the original 8086, and the mode used in all DOS programs. In this mode, processor registers are all 16-bits long, and the currently running program is entirely responsible for the 1024kB of physical memory available to it (how times have changed…).

When a DOS program is run, the contents of the executable are loaded into memory, processor registers are set to values specified in the DOS header, and the bytes immediately following the header are executed on the processor. 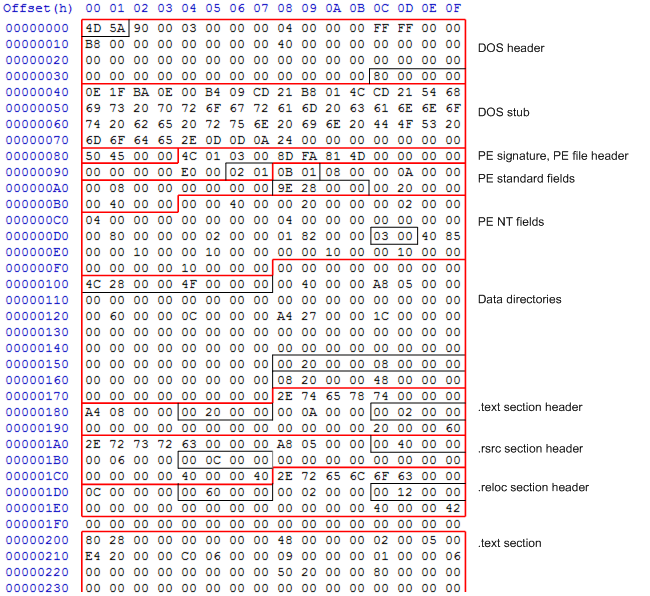 Most of the DOS header consists of the string This program cannot be run in DOS mode.rrn$. In the example .NET assembly above, this string starts at file offset 0x4E. Before that, we have the following bytes:

If we run this through a disassembler, we get the following 16-bit x86 code:

Well, what on earth is that doing? Let’s break it down into stages.

Why is this here?

When the PE file format was introduced in Windows NT 3.1, there was a real possibility users would try to execute PE files in a DOS environment. So the existance of the DOS stub was specified in the PE file specification. When .NET 1.0 was introduced in 2002 for Windows 98, ME, NT, 2000 and XP, there was still a possibility that assemblies would be run under DOS, so the DOS stub was also specified in the CLR specification. For backwards compatibility, this stub still exists in .NET 4 assemblies.

There we go, nice and simple. However, the CLR loader stub, which I’ll be looking at in the next post, is significantly more complicated!