SQL Provision launched in January, offering users blazingly fast database copying, with a light storage footprint, centralized management, and the ability to mask any sensitive data, prior to distribution.

This new release takes compliant provisioning one step further, by integrating data masking directly into SQL Clone’s image creation process, rather than running it as a separate step prior to the image creation.

Having defined your masking set, you can ensure that SQL Clone will apply it during image creation, and then create all clones from the sanitized image. This means that you can be confident that all clones distributed outside of a secure ‘production’ environment will comply with requirements for pseudonymizing and obfuscating sensitive and personally-identifying data.

Many organizations have adopted DevOps practices for the database, to help them make more effective use of the data they collect, for business analysis, as well as for faster development, effective testing, and ultimately to enable them to deploy reliable databases at the frequency they need.

However, in many cases, advances in an organization’s ability to collect and analyze data have outstripped advances in their data governance procedures, which are supposed to ensure that sensitive data remains protected and secure as it travels outside the production environment.

While legislation such as GDPR and HIPAA refer to data minimization as a way limiting the use of data to the purpose for which data was collected, this doesn’t mean an organization needs to avoid using their data entirely. However, it does mean they must have a process to sanitize any sensitive or Personally Identifiable Information (PII), prior to distributing data around the business. The whole process will need to be automated, and auditable so that it complies with national and industry regulations.

Organizations need an effective “gateway” between production and non-production environments, to ensure the safe distribution of database copies, from one secure and centrally-managed location. The challenge is in designing this gateway efficiently, such that that it protects data, but without blocking the team’s development and release processes and without introducing an unrealistic administration burden.

As described in our previous article, a traditional, manual process for distributing sanitized database copies is no longer fit for purpose. The process is difficult to audit, it does not scale, and the administrative burden is considerable.

SQL Provision offers a different approach to the problem, and we’re continually developing it to become the ideal ‘gateway’ tool between production and non-production environments.

Data Masker provides effective data obfuscation and anonymization. We define the required set of data masking rules once, describing how each column and row should be obfuscated and anonymized. We can even define rules across tables, to maintain existing relationship in the data, so that the masked data will look and behave as much like the real data as possible, for development and testing purposes. We can then apply the masking set consistently to the target database, every time we need to distribute a fresh copy.

In the initial release of SQL Provision, data masking was still an additional step. We had to restore a database backup, run Data Masker, and then use SQL Clone to create the image from the masked database, and manage provisioning.

With this new release, users can now run masking sets within SQL Clone, as an integral part of the image creation process. This shortens the workflow, removing the need to perform a database restore prior to image creation, and so makes the provisioning process much quicker, and uses less disk space.

We simply ‘drag-and-drop’ into the image creation process the required data masking sets. We can also run other T-SQL Script to change configuration settings and permissions.

SQL Clone applies them all, in sequence, during the image creation process, ensuring that all clones created from the resulting image are correctly and consistently sanitized. As always, the entire process can be scheduled and automated using PowerShell 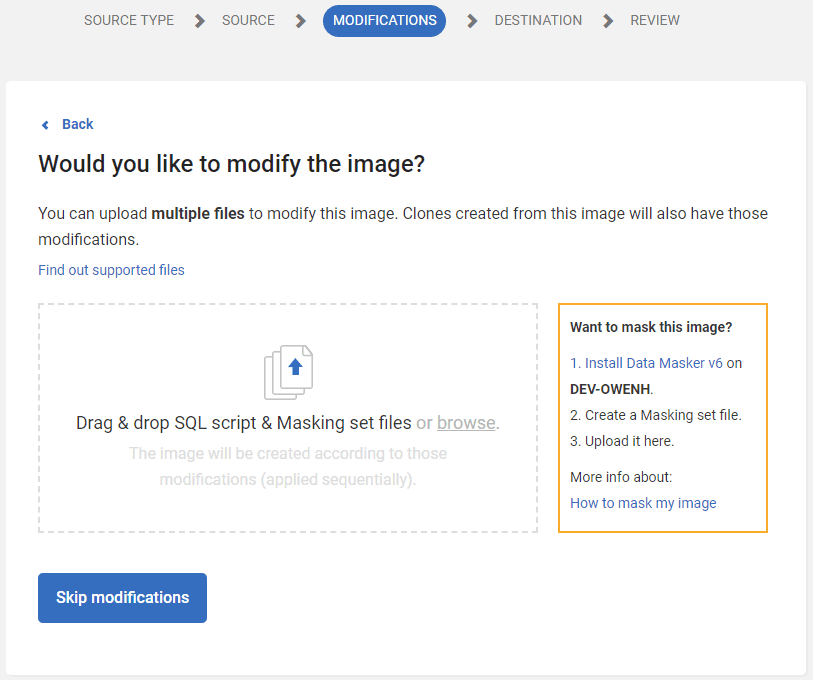 This release of SQL Provision both supports the DevOps approach to database development and testing, and makes data protection more central to the process. Managing provisioning from one central system is more transparent, consistent, repeatable and auditable.

This SQL Provision integration is supported by Data Masker v6.0 and SQL Clone v2.5.0. If you’ve not yet tried SQL Provision, download your free 14-day trial now to get started.