Richard Macaskill shows how to use Docker Compose to get SQL Data Catalog up and running in a container, in your SQL Server test lab, and then use it to evaluate its data discovery and categorization capabilities on a containerized SQL Server instance.

Like many other database developers these days, I have switched to an entirely container-based SQL Server test lab. I love having a demo environment for SQL Server available locally, which I can easily persist and restart, or flush away and start again. Why would I ever go through that “next-next-ok-next” installation sequence, which is joyless even in the best software? Or, sometimes even worse, the protracted process of ensuring the software uninstalls cleanly.

If you’re of the same mind, then it will also make sense to you to evaluate new database software, such as SQL Data Catalog, using the same approach. We’ve tried to make this as quick and easy as possible by providing SQL Data Catalog as a Docker image, which you can install and configure simply, using  docker compose. As we release updates to SQL Data Catalog, we’ll refresh the Docker images, so installing these will be very simple too.

SQL Data Catalog creates the data classification metadata that describes the data that your organization uses. It will apply classification and labeling to any personal or sensitive data in each data source, revealing where, throughout the organization or elsewhere, this sort of data is stored and used. The types of data, the business owners, the purpose and the sensitivity of the data will come naturally from any competent data cataloging. – Josh Smith. Data Categorization for AdventureWorks using SQL Data Catalog

The Docker Set up

The first step will be to install a SQL Server 2019 image into a Docker container, in my case called SQL2019, get it running and then install into it the demo databases we wish to categorize.

We then need to get SQL Data Catalog running in a container, within the same VM. We’ll do this using docker-compose. This in fact creates two containers, one for the application (sqldatacatalog) and another one (sqldatqcatalog_storage) where the SQL Data Catalog service can create the SQL Server instance and database it needs, for storing state. Docker creates a virtual network (sqldatacatalog_default) for these two containers.

1. Set up a SQL Server 2019 instance in a Docker container

To set up my SQL2019 instance, running in a docker container, I followed the guidance already laid down by a few SQL community authors:

Following their instructions, I’m soon ready to start my SQL Server container, using the -v command to specify a persistent, named volume from which I can restore some database backups, without first needing to copy them into the container filesystem:

Next, we install sample databases into container simply by restoring backups, moving the files to the filesystem of the container.

That done, I’m good to go; I’ve got an instance of SQL Server 2019 with some sample databases.

The next step is to get SQL Data Catalog running in a container, within the same VM. According to the instructions on the Docker Hub, https://hub.docker.com/r/redgate/sqldatacatalog, I can either run the application and configure its connection to a database for its backend SQL store, or allow Docker to do that for me by using docker-compose.

I’m going to go for the latter option, so the first thing I need to do is copy and save the example docker-compose.yml file provided on the Docker Hub page (changing the sa password, of course):

Then, from Docker cmd line, navigate to that folder where you saved it and run docker-compose up.

I’ll see in my terminal window that Docker is creating the database backend and the application container for my evaluation of SQL Data Catalog. 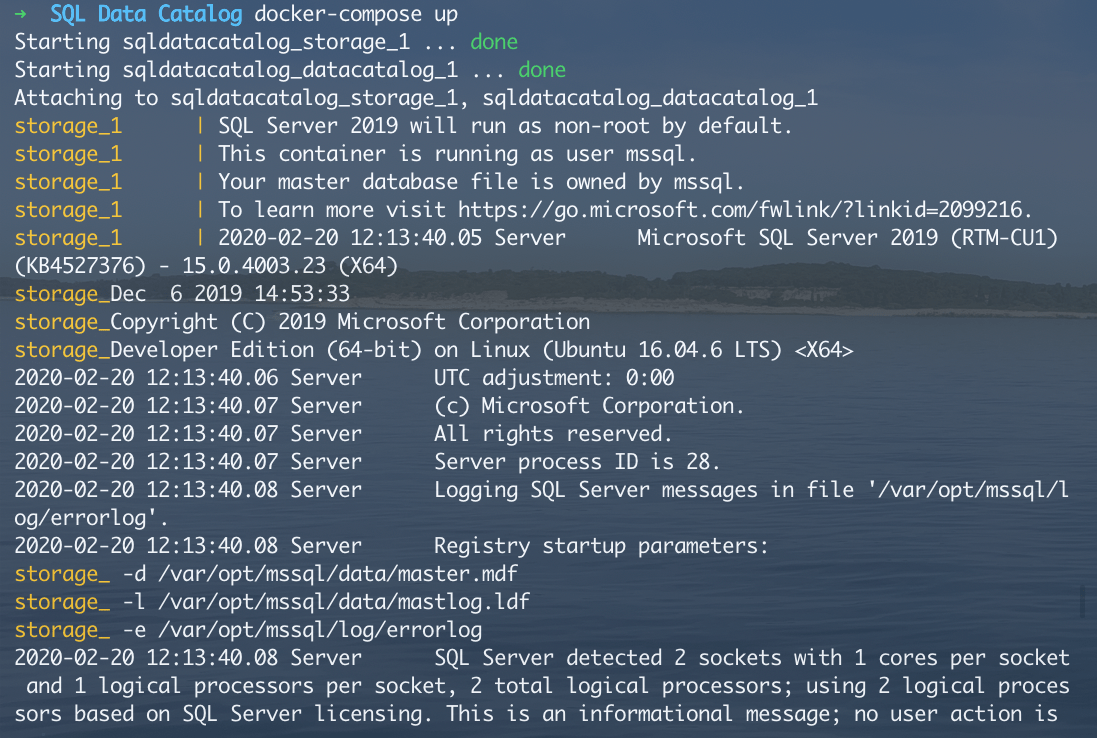 One that’s running (give it a few seconds), I’ll have an instance of SQL Data Catalog available at http://localhost:15156/.

Note that, with the current configuration, it is possible to encounter a race condition where SQL Data Catalog starts before the backend is ready. If you see an error when you connect in your browser, just stopping the process with ctrl-c and running the docker-compose command again will usually fix it. Alternatively, open a new command window in the folder containing the docker-compose.yml file, then run:

So far, so good, but it’s looking a little empty in there. What I need are some SQL Server instances so I can try out data classification.

Here’s where some more Docker magic is going to help.

I already have my SQL2019 container, and now I’ve created two other containers for the application and database, as required to run SQL Data Catalog. When we spun up SQL Data Catalog in a container, with a dependency on a storage container, Docker automatically established a virtual network (sqldatacatalog_default) through which the two could communicate.

I can check that has worked by running:

In the network section of the output, I can see that this network knows about 3 containers: 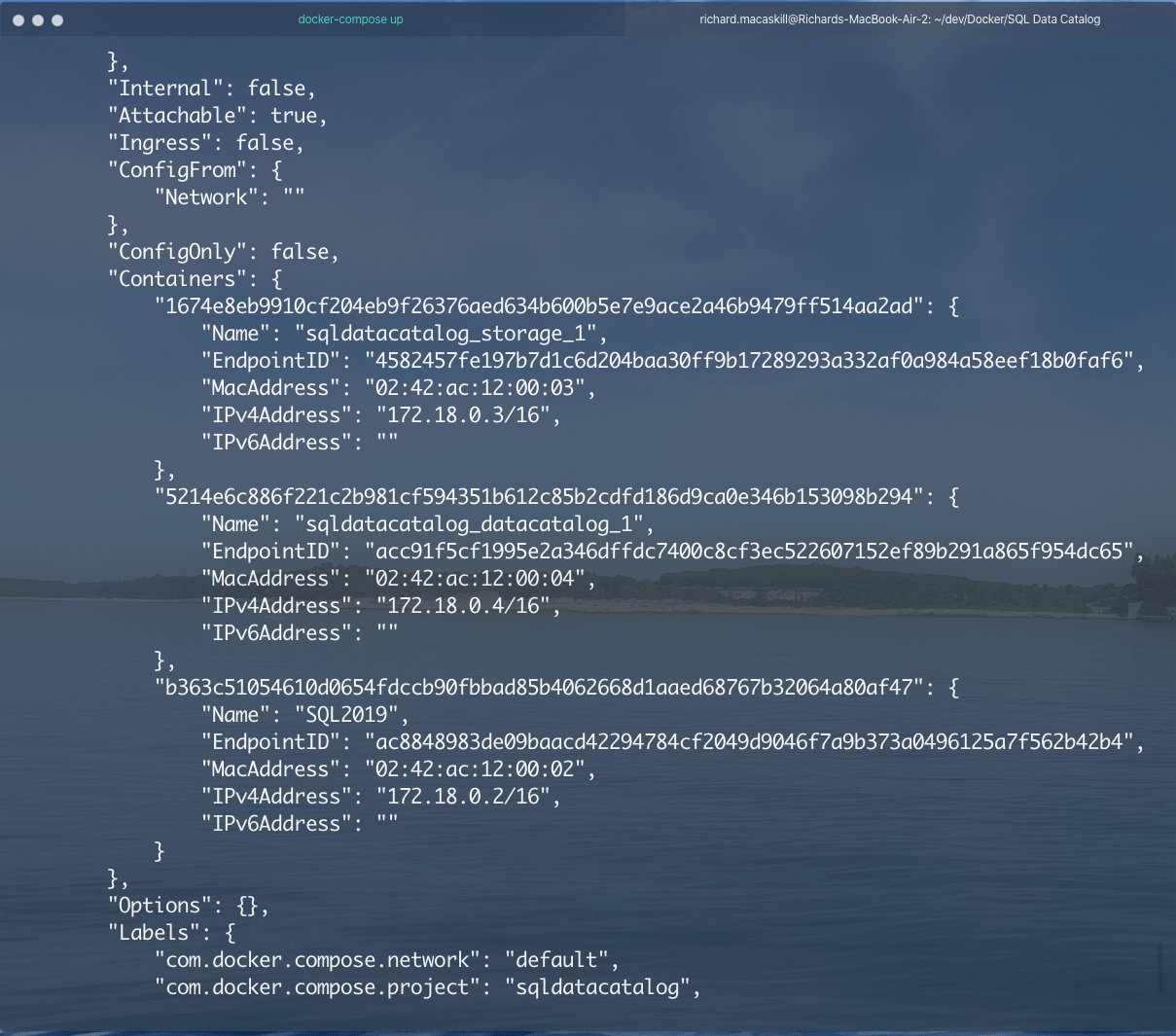 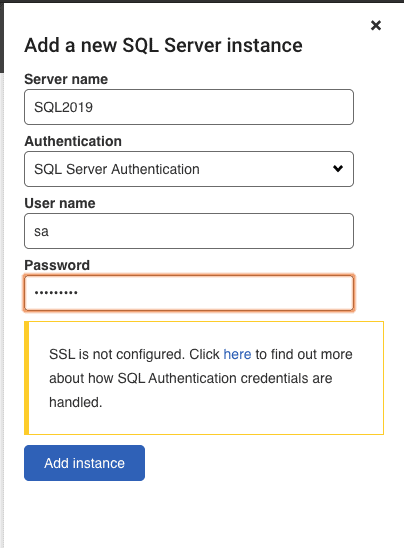 SQL Data Catalog will connect and start scanning each schema in my demo environment. Allow that task to complete, and when we click on the SQL 2019 instance, we’ll see our sample databases ready for us to try out data classification.

Try accepting some of the suggestions, customizing the taxonomy, and using the REST API and PowerShell to see how SQL Data Catalog can help you classify your SQL Server estate. I’d recommend checking out the documentation here and especially the PowerShell worked examples (there’s one to automatically classify AdventureWorks, here).