How to do Accurate Address Masking using Data Masker

Grant Fritchey shows how to adapt a data masking process, for address data, so that it incorporates knowledge of the data distribution in the real data. The result is fake address data, with an accurate distribution, for use in development and testing work.

My previous article demonstrated how to mask address information, so that it couldn’t accidentally reveal personal or sensitive identifying information. However, we had little regard for the verisimilitude of the data, beyond the fact that the data still looked like address data. In this article, I’m going to outline a set of methods that we can implement using the SQL Data Masker tool, in SQL Provision, to achieve both fake and accurate data, and data distribution.

Before we start, I need to repeat the warning from my previous article: I only describe how to mask address data in the Person.Address table; you’ll also need to locate any other data that could be used to identify a real address, such as a phone number, and apply to it similar masking strategies. I also assume that you’ve masked all the other types of identifying and sensitive data in your database.

You might think that, rather than go through the effort of manipulating and masking multiple columns in the Person.Address table, you could just scramble the Person.BusinessEntityAddress table that maps BusinessEntityID to AddressID. However, as discussed at length in the previous article, there are many ways that address data, on its own or used as part of an inference attack, can identify individuals. Either data is masked, or it isn’t, and the only way to be sure it is, is to cleanse the data thoroughly. The only thing that is up to you is how much effort you need to expend, on top of that, to make sure the data is masked realistically.

There are various approaches to retaining the data characteristics and distributions of the real data, during masking. Here, I’m going to maintain the production distribution for postal codes, so I’ll no longer be substituting postal code values for fake ones. Yet, we still don’t want to retain that information on any given person’s data, so we need to shuffle the data to ensure that no AddressID value remains associated with a given PostalCode. I’ll still be replacing the AddressLine1 and AddressLine2 columns with completely fake data.

Having done this, I’ll reestablish an accurate correlation between postal codes, and the States/Provinces and cities, by using staging tables to look up valid StateProvinceID values and City values, for the associated PostalCode. This means that if the town of Grafton appears in our fake city data, it will be correctly located in the state of Massachusetts and have a valid zip code for that municipality.

Figure 1 shows a screenshot of the full Masking Set from SQL Data Masker (available to download, FocusedAddress.DMSMaskSet), which I developed for AdventreWorks2017:

Let’s walk through each of the steps and outline why I chose to do them, and in the order I chose. It all reflects on our need for realistic data but done within the context of maintaining a distribution and dealing with the structure of our database.

Command rules in data masker simply allow us to execute SQL statements in the target schema. We need to use a Command rule to create the staging tables that will allow us to maintain the relationships between PostalCode, and both StateProvince and City in the ‘live’ data. We’ll load these staging tables with the required subset of the original data and then, after we’ve performed the postal code shuffling and address line substitution steps, use them to lookup the correct city and state values, for each given postal code. Instead of retrieving information from your original database, you could use an external data source for this lookup information, if you have one available.

Listing 1 shows the Command to create the staging tables. You’ll note that I also created UNIQUE indexes to help with performance of the data masking process:

Data Masker is quite particular about the definitions of the tables it’s attempting to load. It needs to be sure that these data structures match what it has stored as the data definition, to avoid errors. Data Masker can’t reference tables for which it doesn’t have a schema.

This requirement for schema definition to be in place ahead of time puts me in a bind. In this case, it means that I need to create the staging tables one time, manually, even if they are empty, with the indexes. I can then get Data Masker to capture them into the schema definition, stored with the data masking set. After that, I can drop the tables, just as we do at the end of the actual data masking process. If you later update the schema, in the masking set, you’ll need to recreate the staging tables manually.

Next, I use a Shuffle command to scramble the existing PostalCode values.

By retaining the distribution based on postal codes, it means that the cardinality of the predicate WHERE PostalCode='Y03 4TN', for example, will be the same in faked data as in the original data, meaning that Listing 2 will return the same number of address values for each postcode, before and after the masking set has been run. 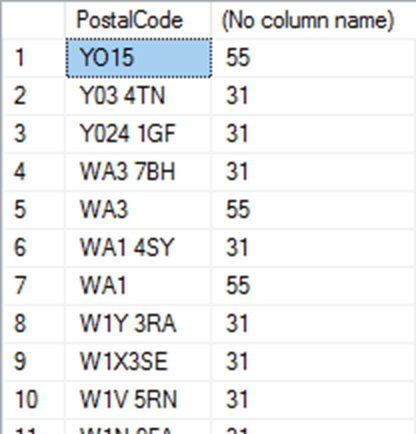 Conversely, Listing 3 will prove that after the shuffle, each AddressID will be associated with a different postal code.

This is the first seven values before running the masking process:

Already, we’ve masked our data to ensure that no individual will be associated with its original PostalCode. However, all the other address details for each record are, at this stage, identical. The record with AddressID 204, for example, still relates to an address on Kenston Drive in Sammamish, Washington, but will now has a different postal code (Y015, in this case, instead of 98074).

The substitution rule will replace all the existing values in the actual AddressLine1 and AddressLine2 columns. In this instance, I am using purely fake data. It is not accurate address information to any given municipality or postal code:

This is where ‘fake but accurate’ leans more toward fake than accurate. If we needed literal address information from a given municipality, we’d have to go to some external data source to get it. Even if we did that, we’d want to be sure to use that data to mask both the AddressLine1 and AddressLine2 columns. There’s just too much likelihood of some PII information leaking in otherwise.

Here’s the City column update as an example: 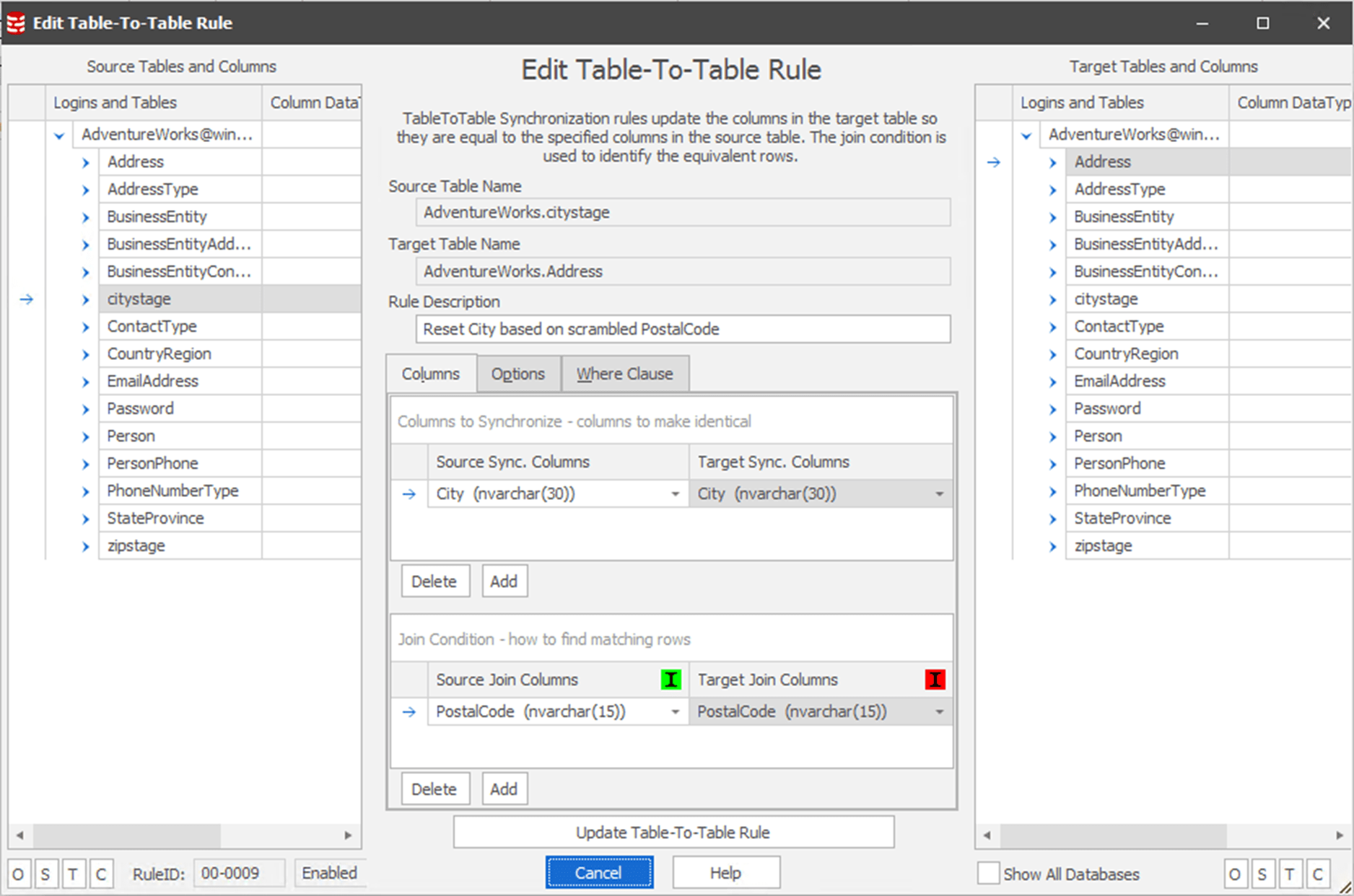 Now, the City and StateProvinceID values are accurate to the PostalCode, but in each case they are associated with new AddressID values.

Finally, I have a step that drops my staging tables.

The technique I’ve demonstrated relied on rearranging the PostalCode, substituting the AddressLine1 and AddressLine2 columns, and then synchronizing the shuffled PostalCodes to their correct City and StateProvinceID values. This allowed me to mask the necessary PII information, while retaining the production distribution on my data. A query for AdventureWorks affiliates in a given postal district will have the same cardinality both before and after the masking process.

It’s possible that even knowing that only one customer has an address in the postal code of 01906 may make maintaining th correct distribution problematic. In that event, you may have to come up with mechanisms other than the simple scrambling.

You can’t simply treat address information just like any other string because there is a high correlation between different parts of the address. As such, simply replacing one or even a couple of the address attributes won’t be sufficient, in most cases, to protect the PII data. Instead, all the address information must be redacted in some fashion or another. Then, you can be sure that you’ve protected the PII in your non-production environments.

Only once you’re certain that the data is masked can you move to deciding how to retain this masking, while ensuring that the data behaves sufficiently like the real data to enable meaningful testing. Having large swathes of address columns all with a single value won’t allow us to test our indexes. Instead, we strive for a data distribution within our fake, but accurate, data that is itself, fake, but accurate.

It’s worth some effort though, because the ability both to protect PII, but without sacrificing data functionality or data distribution, will allow organizations to derive maximum benefit from their data in testing and analysis.